After some delay, in the district of Arak and T-3, SAA and its allies began to assault the oasis of Sukhna, the largest Outpost of the Caliphate on the road of HOMS – Deir-ez-Zor. Yesterday the Tigers moving along the southern Bank of the Euphrates already entered the province of Deir ez-Zor, and today began a large-scale operation to capture the oasis. The SAA was of course the option associated with the promotion of the “Tigers” from Resafa to the South, to reach out to Suhne from the North, but the choice was made in favor of a more ambitious plans associated with larger operations, access to Deir-ez-Zor, causing Sugnu will take the Palmyra group that in recent days accumulated strength between Arak and T-3, pulling additional forces and strengthening supply lines (both offensive attempts in the Eastern Hama and attack Bailii in Eastern HOMS). Active operations started yesterday, but already this morning there has been serious progress. 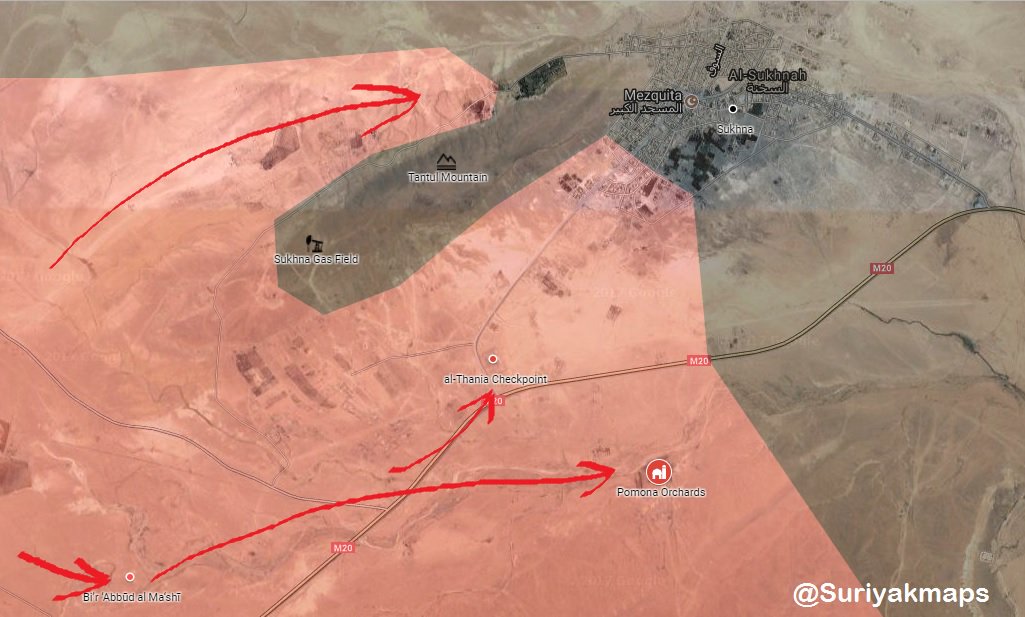 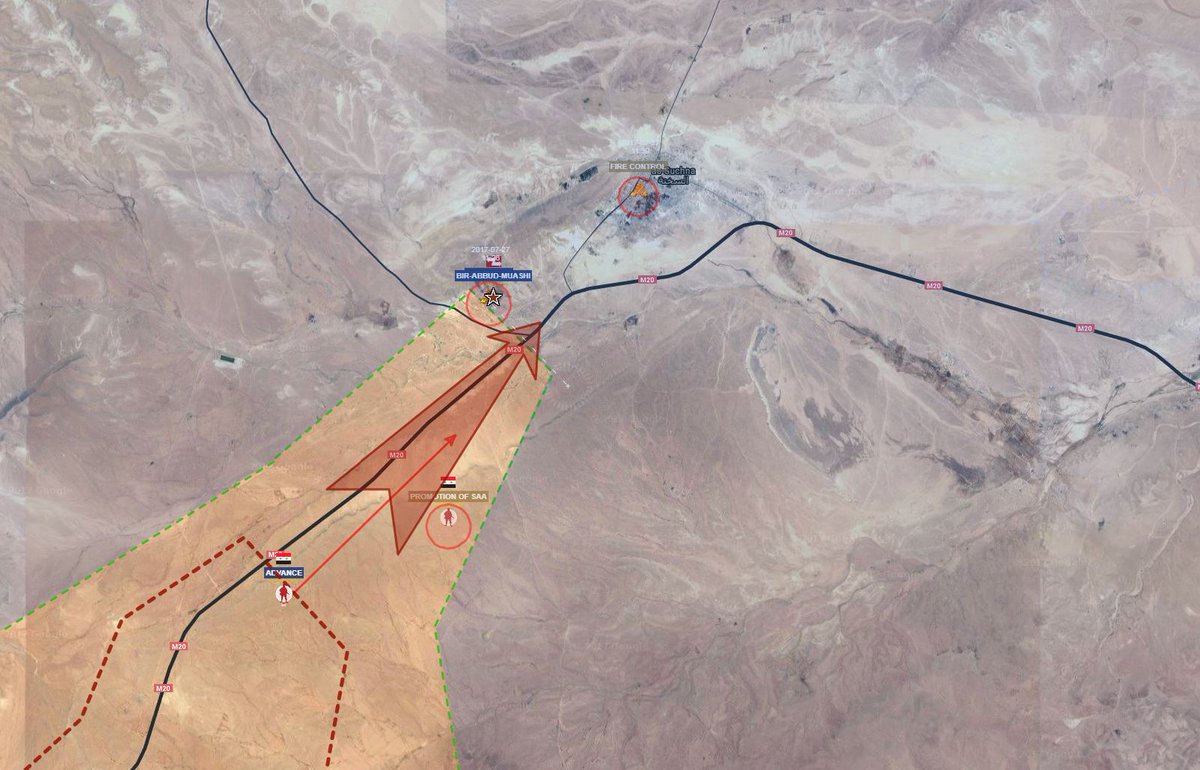 Mechanized group of the CAA was confident enough to crumple the veil of light infantry of the Caliphate and vaginalis to the outskirts of the oasis, taking the number of support points of the Caliphate and adjacent to Suhne from the East hills. Due to the small number of heavy equipment, the enemy is difficult to resist the superior forces of the CAA, which supports the intensive attacks of the Russian aviation. Despite the optimistic reports in the media, the oasis is not currently taken and the enemy if possible, there’ll try to provide enough stubborn resistance, as he did in the district of Arak and T-3. 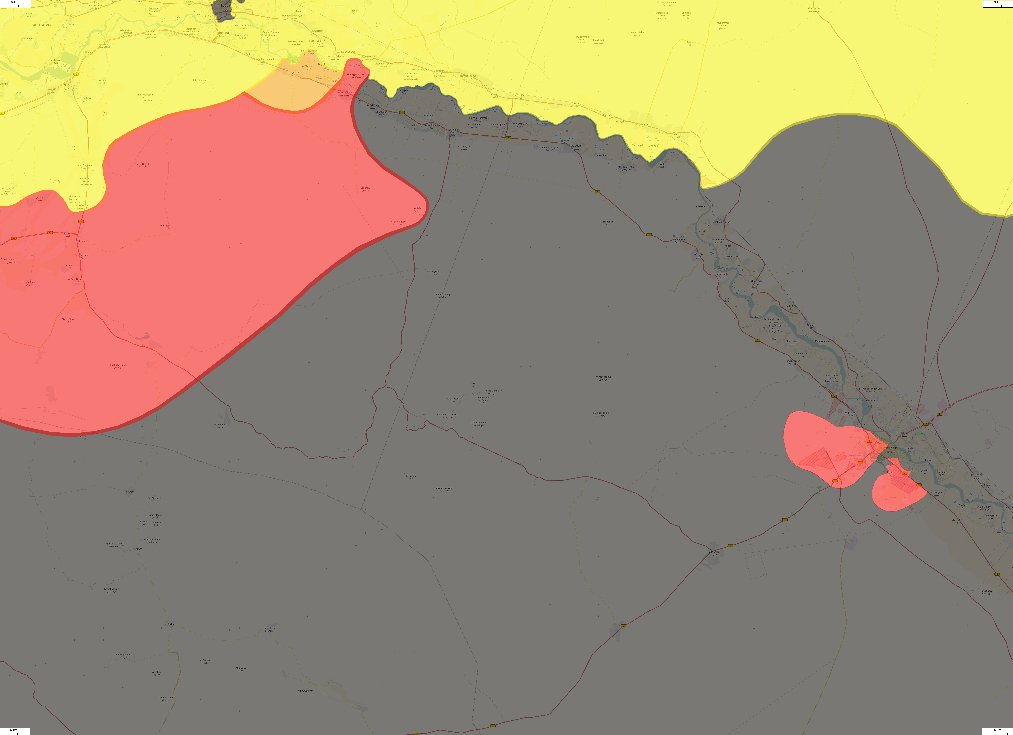 After pulling up the rear, “Tigers” with the support of videoconferencing is quite able to attack directly through the desert to Deir-ez-Zor, up to the Northern part of the enclave in the area of 137th military base.

For SAA, the occupation of the oasis Sukhna will have important operational value, as the capture of Sukhna opens the way for the assault in the province of Deir ez-Zor, where an oasis can be intermediate rear base that will be necessary as you move along the road of HOMS – Deir-ZZ-Zor. For the Caliphate the loss of Arak would mean further complication of the situation to the East and North-East of Palmyra, where in the last few months, “black” has lost a number of key positions. However, their bonnets toss in the air even early – at the expense of maneuver reserves for internal communications, “black” is still able to put together a group for a counterattack.

Of course, compared to the large-scale battles like the battle of Aleppo or of the spring battles in Northern Hama, it looks more like a lesson, propostas territory, but first, it has become possible due to the successes in these battles, and, secondly, the occupation of vast territories in Central Syria provides a consistent strengthening of the position of Assad and supporting the Russian-Iranian coalition, which will be important for the next stage of the war, when the factor of the Caliphate will come to naught.

The vanguard of Syrian troops on the administrative border of the provinces of raqqa and Deir ez-Zor. Via Raqqa to Deir-ez-Zor the Tigers swept in less than 2 months.

General Suhail in its continued helicopter.

On the territory of the former “province of raqqa”.

The Syrian infantry to the South of the Euphrates.

Syrian tanks 9 kilometers from the oasis.