Briefly about the success of the SAA operations

After today’s advance the SAA South of Resafa to heroic Deir-ez-Zor remained 110-120 kilometers.

Before the coming of the “Tigers” and, in fact, lays bare desert, without large settlements and serious natural obstacles, except of course the battered troops of the Caliphate.

In this respect, the grouping of the SAA in the district of Arak is more difficult, because the barrier of the Caliphate in the oasis of Sukhna and hilly terrain, hindering progress towards Deir-ez-Zor from Palmyra.

At the SAA when you attack at the same rate, there are two options after the capture of the crossroads oil field Debison.

On the one hand, you can not hurry with Deir-ez-Zor and move to the oasis Sukhna North, with the intent of connecting with a group of the SAA in the district of Arak. Thus, when connecting the Syrian troops in the oasis of Sukhna, all that will be West of the point of contact of the advancing troops, in fact will be in a huge pot, and will be cut off from the rest of the territory of the Caliphate and most importantly, from the reinforcements from the province of Deir ez-Zor and from Anbar province in Iraq.

A more ambitious plan is associated with a promotion directly to Deir-ez-Zor. If not for the resistance fighters, the Syrian tanks would 3-4 hours to reach the besieged city (adjusted for obstacles and mines). Well, after Stripping the crossing near Debison, you can go to the crossroads near the oil fields, Bishri, and then either directly to the Northern part of the enclave, or first promotion along the track to the crossroads near the oil fields Sulah, followed by traffic on the highway Palmyra-Deir ez-Zor up to the positions of Syrian troops in the area of 137th military base and “Panorama”. In the next few days on a vector of progress “Tigers” see, what’s the plan chose the Syrian command and Russian military advisers, working closely with the parts Suhail. 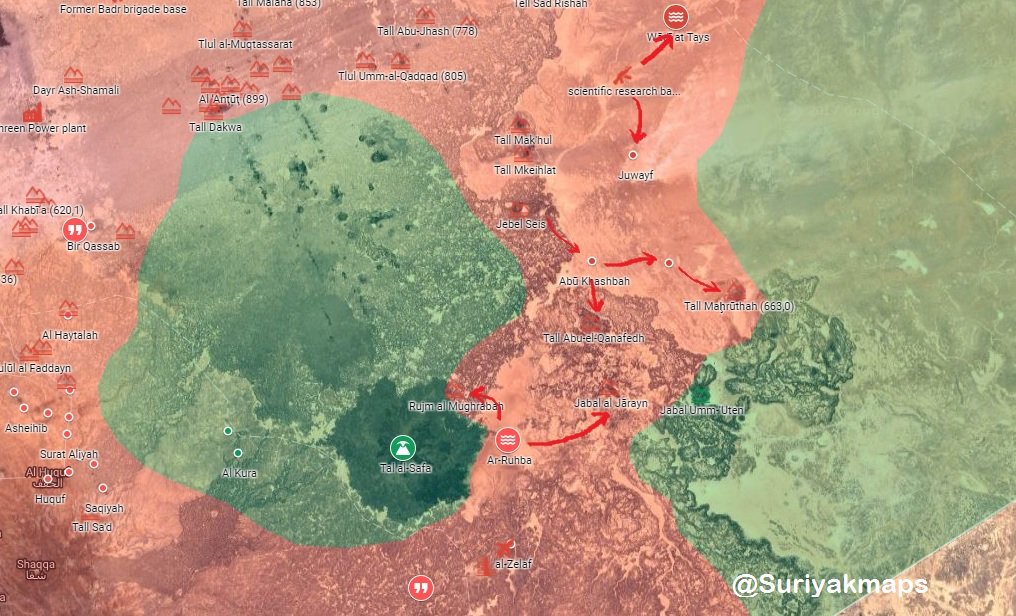 The expansion of SAA in the South of Syria in Suwayda . In addition to the release of vast territories, created the danger of a very large boiler , which in fact are not so many fighters are essentially bare desert with sparse human settlements, the control of the parties over which is conventional and even painted the wall of the boiler is unlikely to prevent those who wish to break at night in the desert to Al-Tapu. But from the point of view of security of rear areas and provide better logistics for the Syrian troops and Iranian “proxies” in the South and South-East Syria, the release of this area seems to be very profitable. Without serious help across the border with Jordan or by us bombing militants is extremely difficult to keep this area as they are seriously outnumbered here current Syrian troops with little heavy weapons. 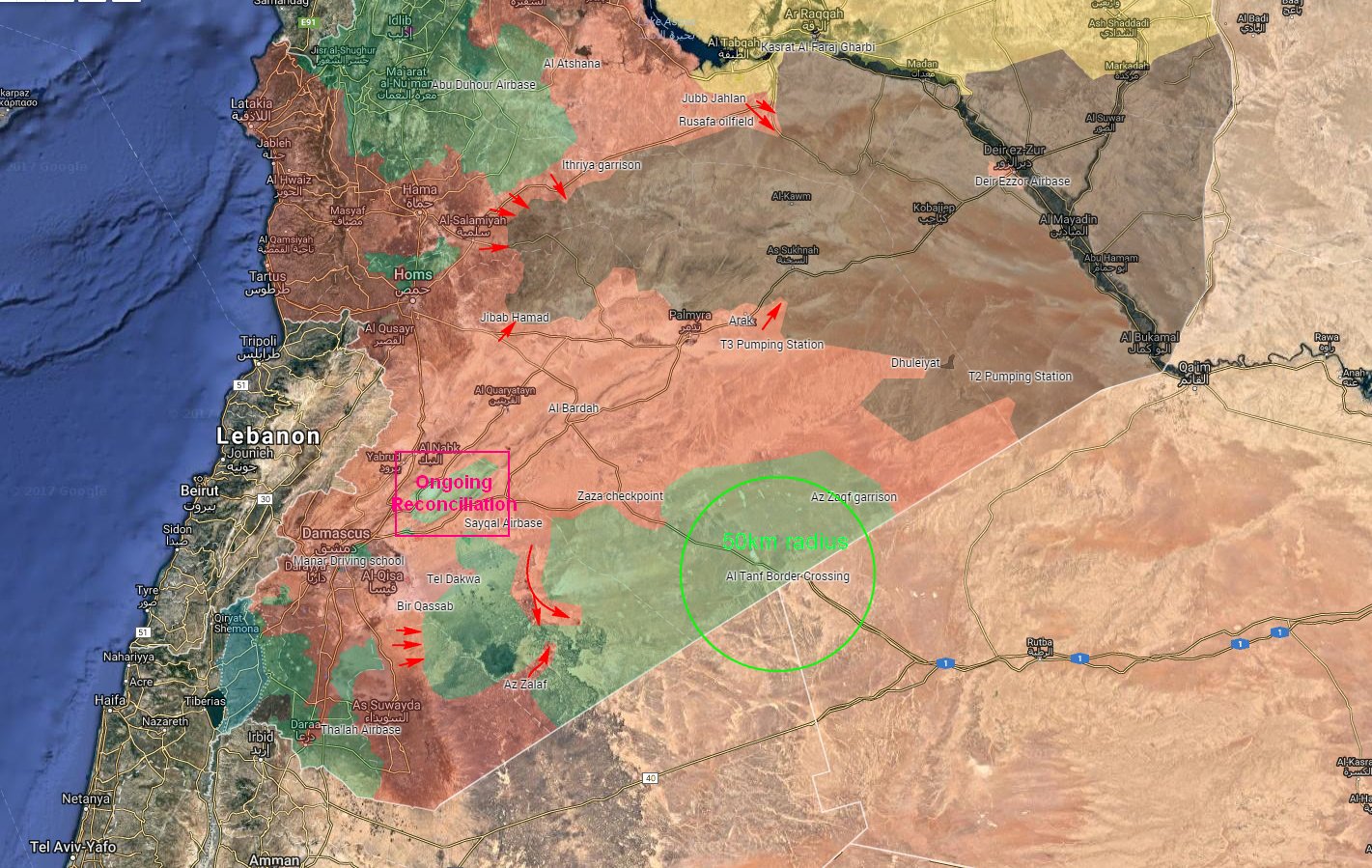 In General, after the conclusion of the U.S.-Russian deal # 3 and frozen active fighting in Deraa and Cantare, the activity of the SAA is distributed in the following areas:

1. The offensive from the area of Resafa (with the possibility to come as an oasis Sukhna and Deir ez-Zor)

2. Offensive in Eastern Hama on Akerbat.

3. The offensive in East HOMS in the district of Pargesa and to the North from the road Palmyra-Ties.

4. The offensive East of Palmyra from the district of Arak to the oasis Sukhna.

5. The offensive in the East Sweida to classes desert areas to the South of the Eastern Kalamoun.

6. The attack Iranian proxy along the border with Iraq to Abu Kemal (don’t know why his maps are sometimes called al-Bukamal, even if in Wiki they write it either Sochi or Abu Kamal).

7. Well, as usual continues the traditional romp in Eastern ghouta, where the offensive bogged down impulses in the battle for residential and industrial buildings.

In large part, these operations involved as VKS RF, and ground forces. Also in support of these operations involved the Pro-Iranian formation. At this stage, we observed large-scale operations related to the release of significant areas of Syria that implement in practice the benefits that Russia and Iran have received after successfully completing the battle for Aleppo and make a deal with Turkey in Astana. The deal with the United States allows to intensify offensive operations and to improve the position of Damascus before the next stage of the war and negotiations about the fate of Syria.Overall, the positive trends described at the end of 2016http://colonelcassad.livejournal.com/3158574.html quite successfully implemented.

But do not relax – you can expect as a new provocation by the US or Israel, as well as counter-attacks from the Caliphate – command “ferrous” is likely to remain true to his principles and try to save up forces for counterattacks on the advancing Syrian troops, so along the way there may well be new operational crises.

PS. And as reported, France has withdrawn demands for Assad’s departure. Now the main priority – the fight against terrorism. The fate of Assad to Paris more does not matter. About macron said at a joint press conference with trump. Apparently confirmed leaks in the American press, according to which Washington agreed that Assad’s fate must be decided by the Russian and the requirements for its care is generally futile because of the changed political and military situation.It is regarded not as a sudden love for Assad, a return to reality, where the departure of Assad at any cost in the form of the main requirements is more damaging to US interests in the region.