Against the background of problems with the storm itself Raqqa and high losses SDF in an attempt to break the defense of militants in urban areas (which in General follows the problems faced by the Iraqi army during the storming of Mosul), the Americans in the last month significantly increased its military presence in Northern Syria –this applies both to the modernization of the existing network databases (as a full-fledged, and various logistical units designed for military interaction with SDF/YPG) and the supply of additional batch of small arms, and various light armored vehicles and specialized engineering vehicles. The reasons for increasing the military effort is fairly trivial – attempt the capture of Raqqa by forces of light infantry with air support initially looked too optimistic. First, it has led to failure of terms of start of the operation to storm Raqqa and then to certain problems in the storming of the capital of the Caliphate.This required as increased supplies of arms to the SDF, but also more active involvement of U.S. special forces and the 75th Ranger regiment in the assault on Raqqa.

In the long term, the Syrian Kurdistan regarded the United States as an important trump card in bargaining with Russia and Iran about post-war fate of Syria, where the escalating Kurdish military capabilities (even despite the frustration of Turkey is a U.S. ally in NATO, which had offered himself instead of the Kurds to storm Raqqa http://news.antiwar.com/2017/07/18/turkey-wanted-thousands-of-us-ground-troops-for-raqqa-invasion/) is a step in the direction of strengthen my bargaining position. As Turkey largely took control over part of the “green” groups and uses this control for bargaining with Russia and Iran, the United States at this stage are basically betting on the Kurds, which since 2016 had priority of supply to the detriment of the interests of the Syrian Free Army.The failure of the attempts of unification Rozhava and Afrin to fully take control of the Syrian-Turkish border does not force the US to stop playing the Kurdish script, but forced the Pentagon to make some adjustments to your strategy in Rojava. 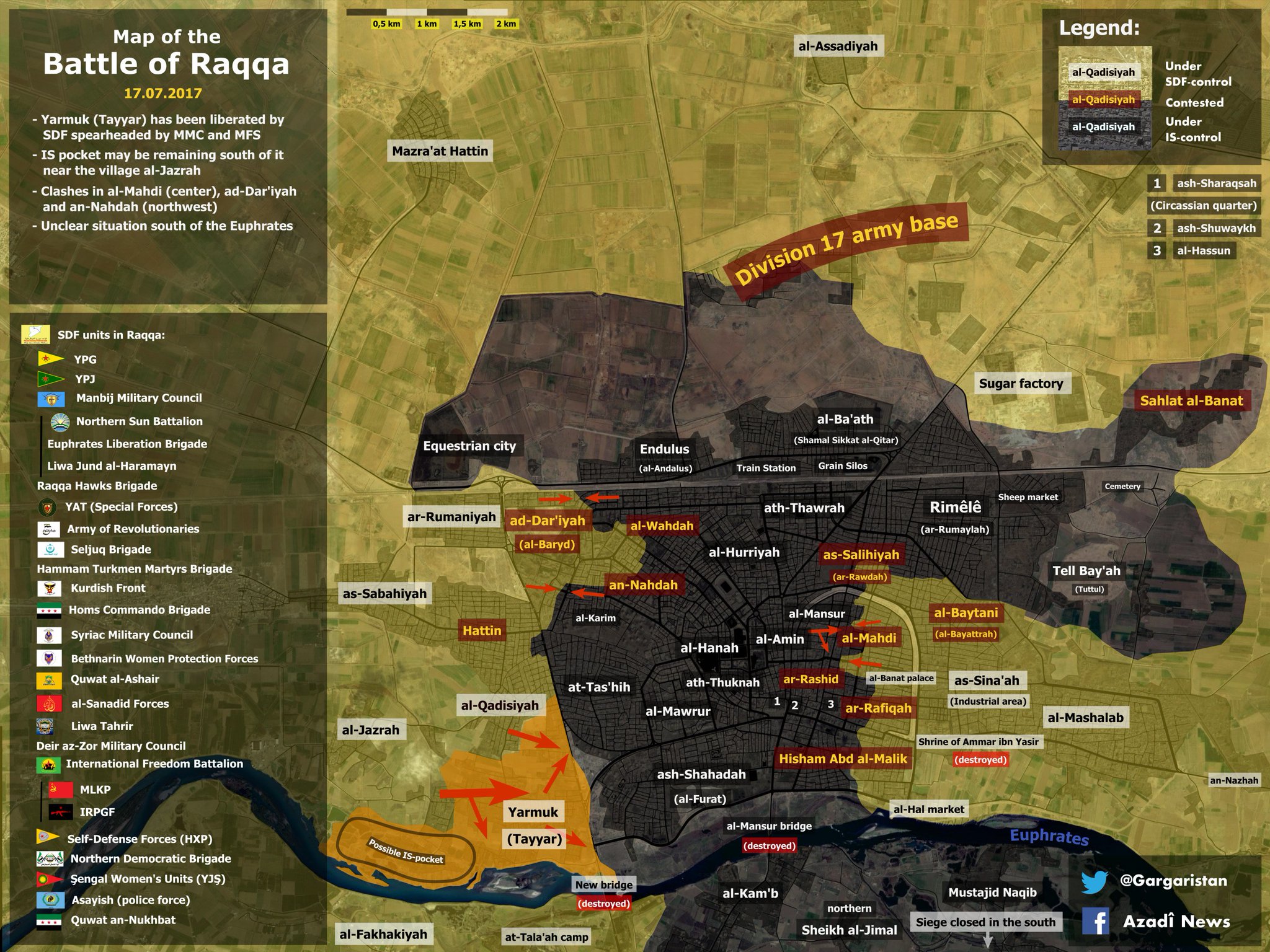 At this stage, the States are committed to the following purposes:

1. To consolidate its military presence in northeast Syria for a long time.

2. The strengthening of the autonomist/separatist tendencies in Syrian Kurdistan to put pressure on the Russian-Iranian coalition.

3. The capture of Raqqa with hanging American flags in the capital of the Caliphate, which should have important political and propaganda value.

4. The extension of the sphere of influence of the SDF on the South Bank of the Euphrates, taking control of key towns between Raqqa and Deir-ez-Zor.

The main problems of this strategy:

1. Difficulties with the implementation of the autonomist aspirations Rozhava, which is surrounded by countries acting sharply against the destruction of Syria in its current borders.

2. The Kurdish strategy in its current form, practically does not inhibit the implementation of the “Shia bridge” that is for the region a priority. The failure of At-Tanta demonstrated lack of US forces to resolve this problem.

3. The Kurds are in a certain dependence on Damascus and the Russian-Iranian coalition at the expense of Afrin and Sheikh Maksoud, which is partly balanced by the Syrian enclaves in Qamishli and Hasaka in the area.

4. Itself the Kurdish strategy of giving short-term benefits, entails a further deterioration of relations with Turkey, which has serious implications for American influence in the region and the whole course of the Syrian war.

In the end, the result of this strategy should be determined in the negotiations on the Syrian settlement, where the priority will be the question of the future of the Kurds as a dead end in resolving this issue ensures that the next war with the previous wheels. The Americans plan to retain for themselves the option associated with the ability to instigate the next war in Syria and Turkey, Kurdish separatism is swapping and using this threat to auction with the main opponents.How they get it, it will be clear in the process of diplomatic negotiations, under which there is a formation of positions. As history shows the threat of the attack of Turkey on the Afrin, USA is the vision of the solution of the Kurdish issue, which the United States and the Kurds have to be considered.