1. In the de-escalation zones, where the US-Russia deal operates, the overall armistice regime is preserved and it can be said that the deal that Trump and Putin concluded in Hamburg is working. The cessation of active hostilities in Deraa demonstrates quite clearly that on the one hand it has already allowed Damascus to transfer some of the forces from here to more important areas, and on the other hand exacerbated the internal contradictions between the militants in the province of Deraa, and also intensified the conflict with the local enclave of caliphate. Russia fully benefits from this state of affairs, helping the SAA to conduct successful offensive operations in central Syria, which is quite clearly reflected in a significant number of liberated territory. The US benefits are less significant, as the SDF is openly bogged down in the battles for the city neighborhoods of Rakki, which are as bloody and bloody as the assault on Mosul, except that the Kurds are trying to act more cautiously than the Iraqi army.

It should be noted that Russia tried to drag the Kurds into negotiations in Astana, but met resistance from Turkey. Erdogan obviously is not ready to negotiate with the Kurds, so there are no changes in the political future of the Kurds. Perhaps, after the storming of Rakki in the autumn and winter of this year, the parties will still be able to agree. A compromise will require concessions from both the Kurds and Assad.
The USA, engaged in Rakka, does not forget about other directions, accumulating forces in the Al-Shaddady area and preparing to occupy part of Deir ez Zor province north of the Euphrates. Most likely, we will see the development of American operations in this direction in the second half of August or even in September. Taking advantage of the fact that At-Tanf lost its importance for the US, and some of the militants actually withdrew from the American subordination, the SAA were able to clear some of the Syrian-Jordanian border, forcing the militants either to go along the border to At-Tanf, or to flee to Jordan.

2. The advance of Al-Nusra in the Northern Hama had no significant consequences and the strategic situation there remained unchanged. Conflict inside Idlib continues. The most loud case was the shooting of “white helmets” by unknown “freedom fighters”. Here one can only wish the parties success in mutual destruction. Al-Nusra now clearly dominates Idlib, but the inability to show activity and a lack of future in post-war Syria will inevitably push them to attack the rival factions in Idlib and to further attacks on the SAA west of Aleppo and north of Hama. Sooner or later, Al-Nusra will have to be cleared, but this issue is now obviously postponed for later.

3. In East Gut, a peculiar dualism of the situation persists, when part of the enclave has concluded a truce and nobody touches it, and the SAA is trying to harden the area of ​​Jobar. This is difficult to give, since the troops (including the units of the 4th Panzer Division transferred from Deraa) struggle with difficulty to advance through the destroyed residential quarters. The offensive is supported by concentrated artillery and aviation fire, but successes are still tactical. The desire to clear Jobar is understandable, but it is worth recalling that such attempts were made in the fall of 2015 with a very dubious result. So this is not the first attempt from the SAA. If this works out, it will certainly be a great success (especially since this time there are some tactical prerequisites and progress), although on the other hand, the troops that were thrown to Jobar’s cleansing could be more effectively used in developing operations in central Syria, where It is the lack of troops and equipment that somewhat hinders the development of the operations of the SAA against the Caliphate because the length of the conventional front is much greater than the forces used here. With the enclave on the border between Syria and Lebanon, things are developing more successfully. The agreements between “Hezbollah” and “Al-Nusra” are carried out and the militants are consistently transported to Idlib. Completion of operations in this area will free up additional Hezbollah forces for operations in other areas. In this case, we can say that the strategy for the liquidation of enclaves started in the summer of 2016 continues to show itself successfully.

4. Operations in central Syria are proceeding quite successfully. Today, they reported that the sweep of Sukhna was finally completed (although it is still a question of completing the demining), plus there are still issues with the cleansing of the resistance of the Caliphate in the areas adjacent to Sukhna. Apparently, it will take a few more days to expand the scope of control around Sukhn and prepare for advancement to the north or to the east. In the last battles, the SAA suffered some losses, both near Sukhna and in other areas of East Khomsa, where the units of the Caliphate undertook a number of fairly successful raids, which, however, did not greatly change the bleak strategic position of the “blacks.” SAA, gradually losing the ability to seriously threaten the key communications of the SAA.

To the north of Sukhny in the province of Raqqa, the SAA extends the control zone in the southeastern parts of the province of Raqqa (including by throwing a helicopter landing into the rear of the militants, which accelerated the advancement of the SAA) and is conducting an offensive to circumvent Maadan, trying to either surround the militants, Who went there from the surrounding villages, or force them to retreat along the Euphrates to Deir ez Zor. According to statements from the Ministry of Defense of the Russian Federation, the issue of the de-blockade of Deir-ez-Zor appears on the agenda and most likely in the next 1-2 months we will see the implementation of operations related to direct promotion to Deir ez Zor. The enclave itself repulsed the next series of attacks of the Caliphate, but its position is still quite complex – the main territory of the enclave is, as before, cut off from the air base. Nevertheless, even in such a favorable situation, the militants can not make progress. Soon they will not be able to storm the 137th base and the airfield. 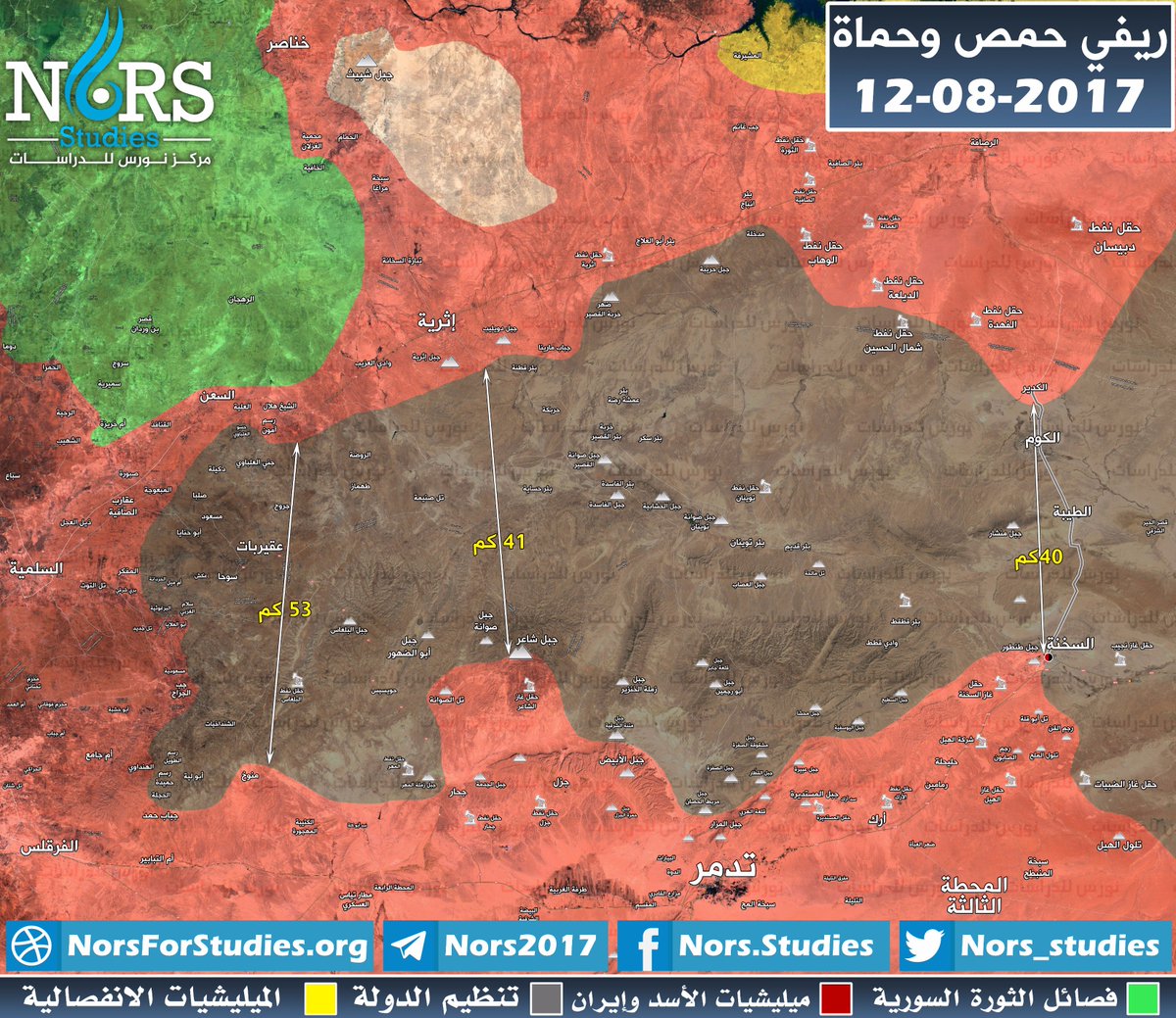 5. The offensive in the Eastern Hama is going so-so. The militants, despite the serious pressure of the SAA, are still holding the front and their defense here is organized. Resistance is also stubbornly resisted north of the Tijas-Palmyra road, trying to prevent the Syrian forces from moving north, which could create a threat to the militants’ encirclement in the event of the connection of Syrian troops east of Akerbat. To the east of the route, the occupation of Huwaisis is of key importance, on the basis of which the militants are carrying out deterrent actions in the Jazala area and in the direction of the key communication on which the group operating in the Sukhni area is supplied.

The SAA still has a strategic choice – either go straight to Deir ez Zor, or tense up and somewhere, after all, split into two parts a huge ledge that simply begs to turn into a huge cauldron in which can There will be several thousand militants of the Caliphate who are deprived of the opportunity to receive reinforcements from Deir-ez-Zor and Anbar.

In general, despite certain losses (in a week several tanks and more than 100 dead and complexities in several directions, the positive trend expressed in the liberation of Syrian territory is obvious, hence the benevolent mood of the RF Ministry of Defense, which did not miss the opportunity to boast that with the help of Russia Assad increased Controlled territory by more than 2 times and achieved a significant advantage in the Syrian war. Of course, it’s too early to relax, since there is still a lot of difficult and bloody work ahead of the liberation of the Syrian Terra The negotiations with the “moderate” and their sponsors, the dismantling of the US plans for dismembering Syria and, most importantly, the resolution of the Kurdish issue. The war is far from over, but now the contours of key tasks are being seen, the solution of which will allow Talk about the end of the Syrian war.Will this happen in 2018 or later, will depend first of all on the successes of the Syrian military and their Russian and Iranian allies. What we see now is the consistent harvesting of what was planted in 2015-2016 Years. It is not without problems, but the general trend is quite favorable and promises further territorial acquisitions.