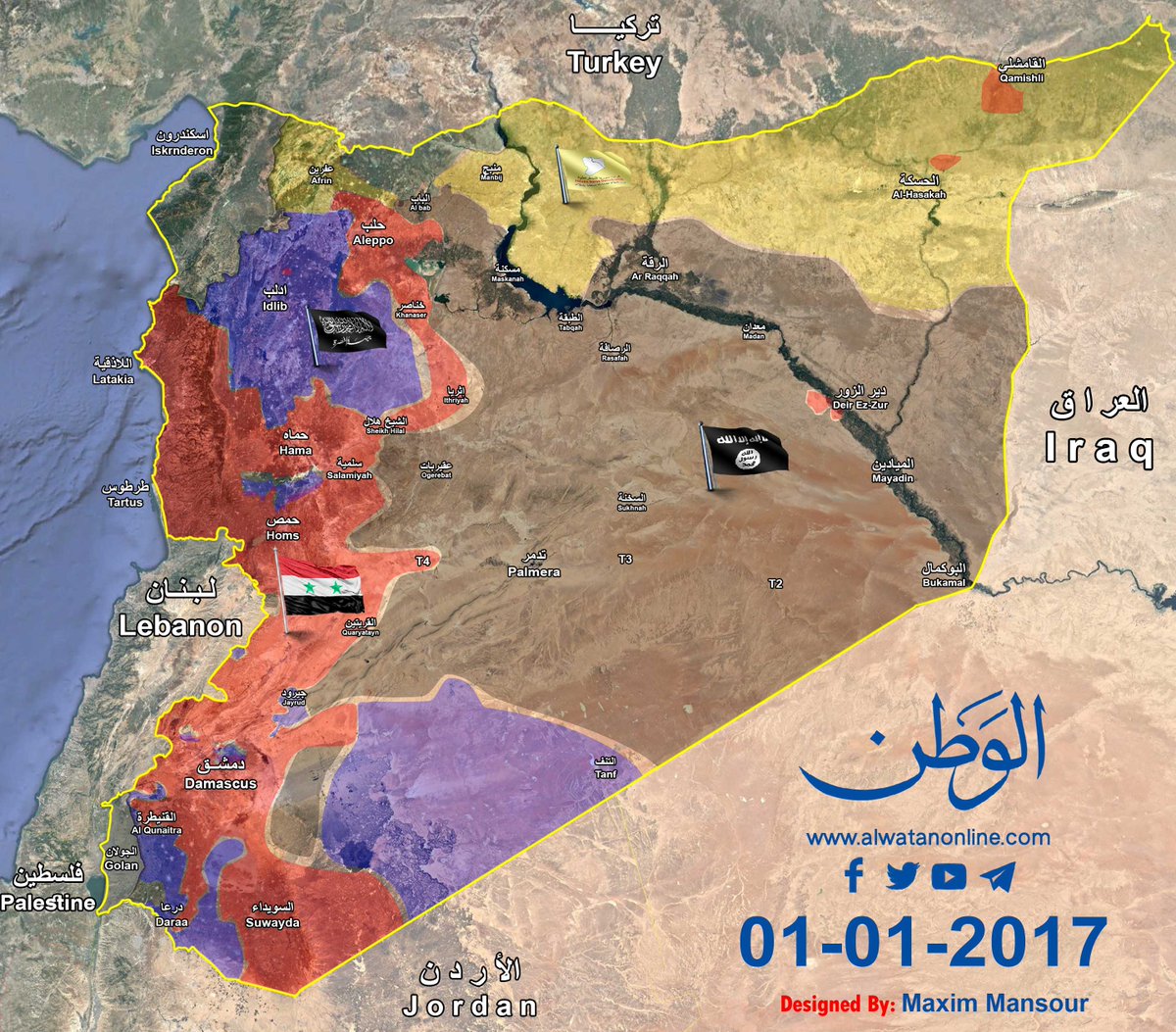 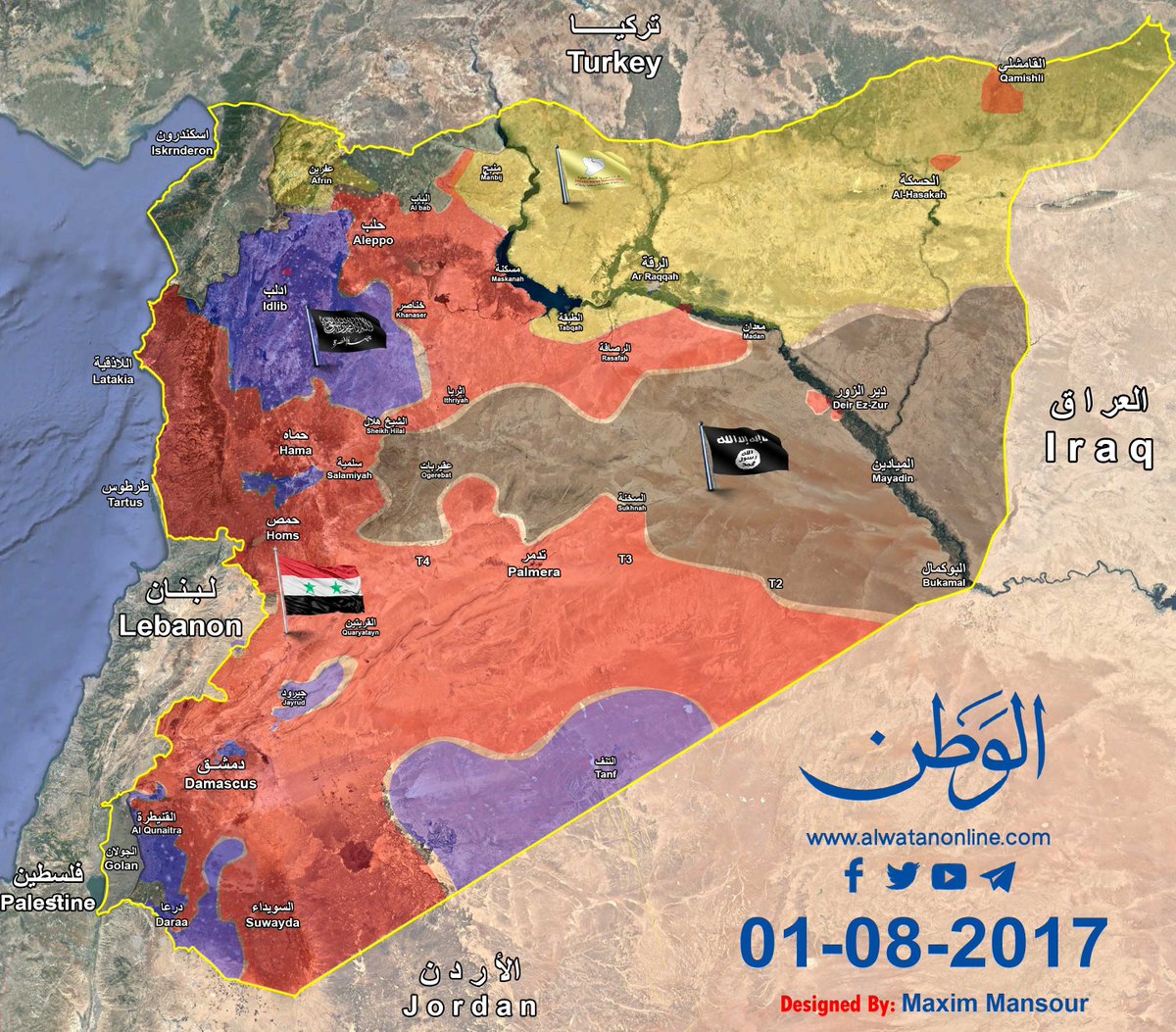 On the evening of 1 August, there were reports that the United States are leaving Al-Tanf and has sent the special forces that were stationed in Syria to Jordan.

One of the militant groups operating in the area is negotiating a surrender to the SAA.

The causes of collapse operations in the area of the Syrian-Jordanian border is very obvious. In June, the US lost the race to the border  http://colonelcassad.livejournal.com/3471838.html when Iranian “proxy” beat the American unit from Al-TANF and broke through to the border with Iraq, where he came into contact with parts of “Hard-SHAABI”. As he wrote in June, current U.S. forces in the area was not enough to actively compete with Iran.

It appears that the ambitious plans of Iran join their forces in Southeast Syria with the groups operating on the territory of Iraq, did not remain without attention of the Pentagon and he is now actively oppose, within the framework of information and psychological operations, and such air strikes.

The first round of the battle was left for Iran, which won the race in Eastern Qalamoun. Now we look at the second round, where the question, will Iran be able to ensure control over the road leading to the border with Iraq. If Iran win this fight, the Americans and the British would remain only the almost bare desert.

http://colonelcassad.livejournal.com/3425927.html – “Hybrid war in Sweida” (by the way, I recommend to read the comments to that post, today, many of them read particularly funny)

Americans, understandably could not make as if to leave everything as it is, it turns out that the whole strategy of using Jordan loses all meaning. Control over a piece of desert near the border, this is clearly not what the United States wanted to achieve by bolstering actions in South-Eastern Syria. Judging by the stuffing in the American press https://ria.ru/syria/20170610/1496243103.html The United States has had unofficial talks with Russia on “zones of de-escalation” in the area of Al-Tanf. But the current configuration of zones of influence, it is rather beneficial to Iran, since the termination of attacks of the American “proxy” in Iran that would allow Iran to seamlessly continue the construction of the land corridor, while the Americans will be sitting in the “zone desolatio”, while they actually lose about is in Syria, as this territory is no longer bordered by the territories held by the Caliphate.

There is a serious likelihood that the United States will try to incite stretched to the border of the operational guts of their “proxy” to “continue the war with the Caliphate”. Rumors of a new air strike in the area of Al-Tanf while not completely confirmed, but this aggression against the actions of Pro-Syrian groups, a sign of rising irritation USA current developments in South-Eastern Syria. On the other hand, the limited power in Jordan and the coming of the flow contingents of Shiites from Iraq, dramatically reduce the chances of Americans replay the situation in your favor.Perhaps in response, one should expect activization of actions of fighters in Deraa and new airstrikes. But this is rather vague, and yet, the US clearly inferior to Iran and To the competition abroad.

The development of the operations of the SAA and its allies in June-July 2017 and the medium-term prospects.

In the end, airstrikes http://colonelcassad.livejournal.com/3425927.html did not help, the attacks of fighters to the forefront of the SAA and the Iranian “proxies” around the perimeter of the enclave was not successful. Cutting off the US from advancing to Abu Kemal and connections with fighters in Eastern Qalamoun, SAA and its allies are actually cropped all of US activity in the area, having at that time to occupy another part of Sweida, move to T-2 and exit at the immediate approaches to Sohne via Arak and T-3.

As a result, the United States recently acknowledged the failure of his policy in southern Syria and announced the reduction of support for Syrian rebels http://colonelcassad.livejournal.com/3554165.html, both in General and regarding some of the factions operating in the area of At-TNFa together with the CIA created the “New Syrian Army”. Here is just one of those “thrown” factions and negotiating the surrender. According to Julian röpke, one of the groups have surrendered to the Syrians https://twitter.com/JulianRoepcke/status/892453776216526852 but here however should wait for more reliable sources than “jihadi-Julian”. As reported https://twitter.com/Souria4Syrians/status/892431364485767172, this group made it a condition of any fight along with USA against ISIS by agreeing to the transfer in North-Eastern Syria, or bring down on all four sides. Fighters reluctant to fight ISIS expressed and went to surrender to the SAA. Whether US troops are withdrawn completely or until it is about partial folding of the grouping will be clear in the coming days. About the folding bases the CIA, the Syrian-Jordanian border, I think it is not, moreover, in addition to Al-TANF, USA will try to play the card of Deraa.

With the current configuration of the front, leaving the At-Tanta in principle arises, and will recommend it to the American special forces nothing. ISIS is no longer here, the Iranian plans to interfere failed, to provide a connection to the fighters in Eastern Qalamoun did not. Even the US was forced to admit that the legal basis here is they have no http://colonelcassad.livejournal.com/3557547.html And to sit and hold a piece of useless desert, not a lot of sense. Hence the rumors that derived from southern Syria through Jordan, the troops will be deployed either under the RACC for the strengthening of the group storming the capital of the Caliphate, or al-Shadadi, to support the operations of SDF/YPG on the North Bank of the Euphrates, to advance to Deir-ez-Zor.The completion of the history with Al-TANF in one form or another, would mean that Syria and Iran won an important round in the fight for the territorial integrity of Syria, destroying the plans of the US and the UK to use southern Syria to operations aimed at the dismemberment of Syria. But the victory in one battle does not mean winning the war. There are still finishing off the Caliphate, negotiations with sponsors “green” and the Kurdish problem.

PS. Title gluing maps reflects the current progress of the Russian-Iranian coalition and the Assad government in the Syrian war since the beginning of the year. It can be confidently stated that by September 1, a significant part of the 2nd map will be shaded in red.