After the capture of the capital of the province of Idlib, it was only a matter of time before “Al-Nusra” and those joined to the group will strike at the SAA. The day before yesterday they began to test the defenses of the SAA to the West of Aleppo, in front of Zahraa quarter.

Well, today they started the attack in the direction of Maan in Hama’s Northern (Eastern part of El Latnenskogo protuberance), approximately from the same position where the end of the spring battle in Northern Hama (when both parties in the course of high intensity action suffered heavy losses). Al-Masdar reported that in the forefront of the attack were Chechen fighters.Tonight was not reported any significant operational successes of the insurgents (some sources reported the initial success of the jihadists who took several locomotive of the SAA, and then a successful counterattack on the returning half-backs), but Pro-government sources, and resources supporting the militants say that the battles are the most intense since the end of the spring battles in Northern Hama. Sources Hezbollah argue that the main position held army.The militants have also reported that Syrian artillery for a second day handles their position in the area of El Glutamine, which is their center position, based on which they conduct operations in Northern Hama. Also increased the intensity of the air strikes.

For “Al-Nusra”, which contracts with Turkey, Syria and Russia have not signed, there are no limiting constraints, therefore strengthening their own power and significantly weakening Pro-Turkish “Ahrar al-sham”, she not only has grown substantially in size and rallied around radicals, but also created the preconditions for the intensification of hostilities “illinsky” fronts. The likely catalyst of the offensive was the decline of morale of the militants in Idlib, which in addition to the General adverse to “green” developments in recent weeks was watching the pacification Rustavskogo of the boiler, the mountainous region on the Lebanese border and negotiations on Eastern ghouta. In this respect, activity in the Northern Hama, one of the few remaining ways to throw fuel to the fading fire of war against Assad. “Al-Nusra” we need a military victory, which will help to maintain the morale of the fighters and rally them against a common enemy, in order to reduce the intensity of internal squabbling.

About the threat of strike fighters in North Hama wrote a couple of weeks ago http://colonelcassad.livejournal.com/3564170.htmlso I would hope that the training of militants for offensive action did not go unnoticed and they will meet the proper resistance. The second chopper in Northern Hama during the six months, the SAA now is not strategically advantageous, because a part involved in offensive operations in Central and southern Syria and pulling them back under Boor, would have seriously reduced the rate of release of Syrian territory. Time “An-Nusra” and of course will come in 1-2 years, most of its current commanders will be killed, as a significant portion of its current personnel, but at the moment there are higher priority tasks. 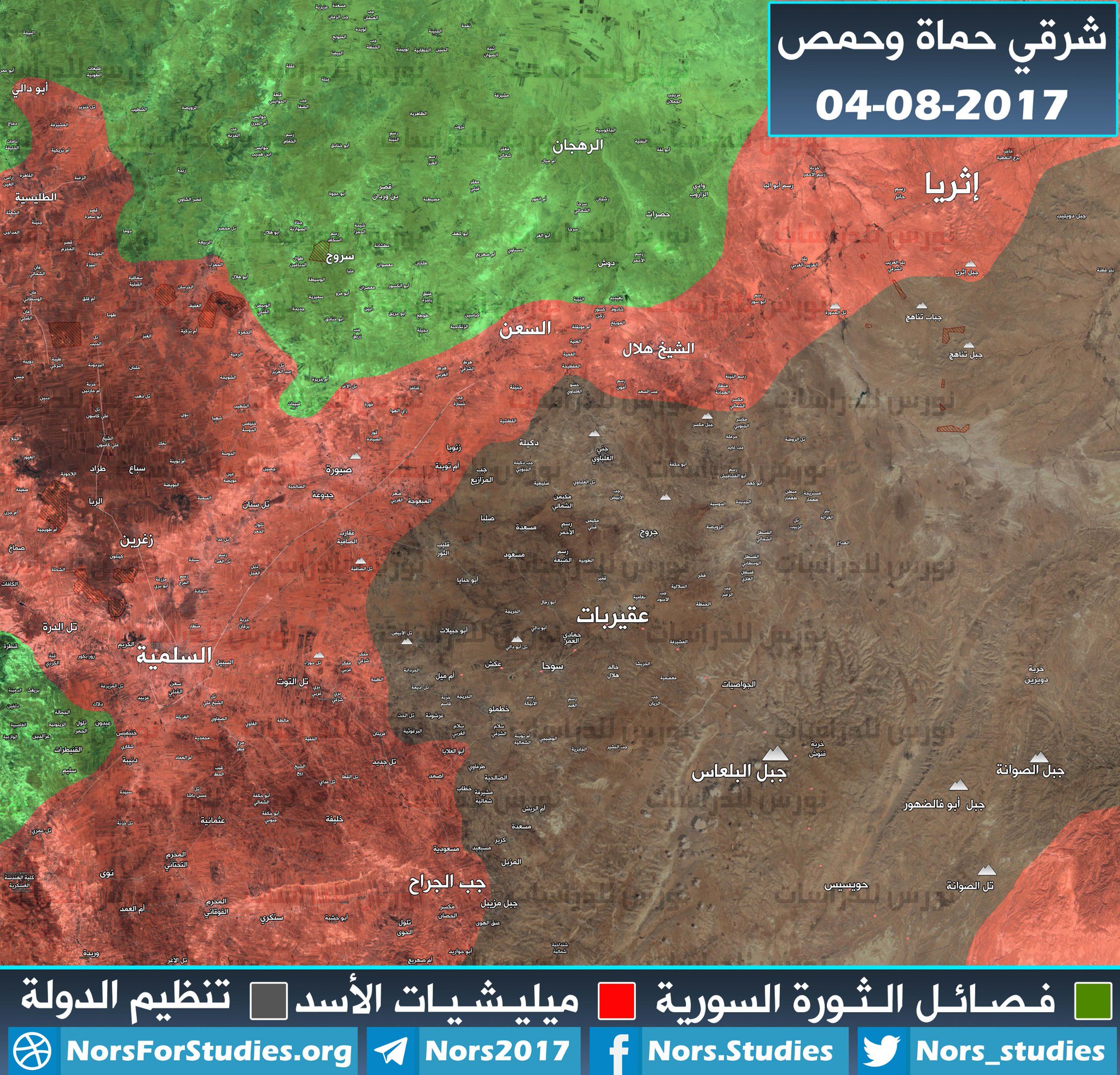 The overall situation in the North and East of the province of Hama.

In the long run, the sweep of Idlib is necessary. Of course that would require a serious concentration of forces on the front West of Aleppo and Northern Hama, focusing on the area with airpower, and serious diplomatic efforts with Turkey, that would at least close the border for groups associated with “Al-Nusra”, and maybe would have made more decisive steps in the framework of its commitments to combat “Al-Nusra”, since the setting of “Ahrar al-sham” to “al-Nusra” and ending with the strikes of artillery and aviation by the militants with actions of the Turkish SSO in the border areas. But it appears that the task of advancing towards Deir-ez-Zor and the Syrian-Iranian border with the prospect of the capture of Abu-Kemal, strategically more important at the moment.

It should be noted that simultaneously with the development of events in Northern Hama, SAA is quite intense fighting with the Caliphate in Eastern Hama, where both sides suffer substantial losses, while the SAA is not yet able to achieve the key objectives of its offensive operations, which it then holds in may. The recent visit Suhail suggests that operations in the direction of Akerbat and Salamis will in coming weeks be given much more attention.

Well, in Hama waiting for developments, as the current intensity of attacks in the next 2-3 days may show the seriousness of “Al-Nusra”. Well, already in the course of operations of the militants will be clear – whether they are in March 2017 to create for SAA operational problems or to limited local tactical operations.

As a reminder. The battle of Hama in the North – end of March – beginning of April.