Despite the downed plane http://colonelcassad.livejournal.com/3488987.html and clashes with the SDF http://warsonline.info/ukraina/novosti/siriia/west-raqqa18-06-17-1.htmlthe Syrian Army won the race to Reshape.

Advanced units of the SAA “Tigers” drove away from the area of the village a few DAESH fighters and thus occupied key road junctions to the South of Raqqa.

The Americans apparently were late in reaction, because they start their countermeasures for 2-3 days before, not the fact that now Resafa hung the Syrian flag.

For some reason, workaround SAA South of Tabka was underestimated, both in terms of goals and in terms of the pace of progress. Attempts to dramatically change the situation in their favor leaving the SDF forces South to Resafa, has not led to the desired result. This is the second significant failure of the United States over the last month, if you count the release of an Iranian “proxy” to the border with Iraq. Shot down a Syrian plane then of course is their weak consolation, since the operational objectives associated with the control Resafa  they could not achieve.

For the SAA, with the occupation of Resafa there are interesting opportunities associated with promotion to the Euphrates, and in terms of the deployment of offensive on Deir-ez-Zor. 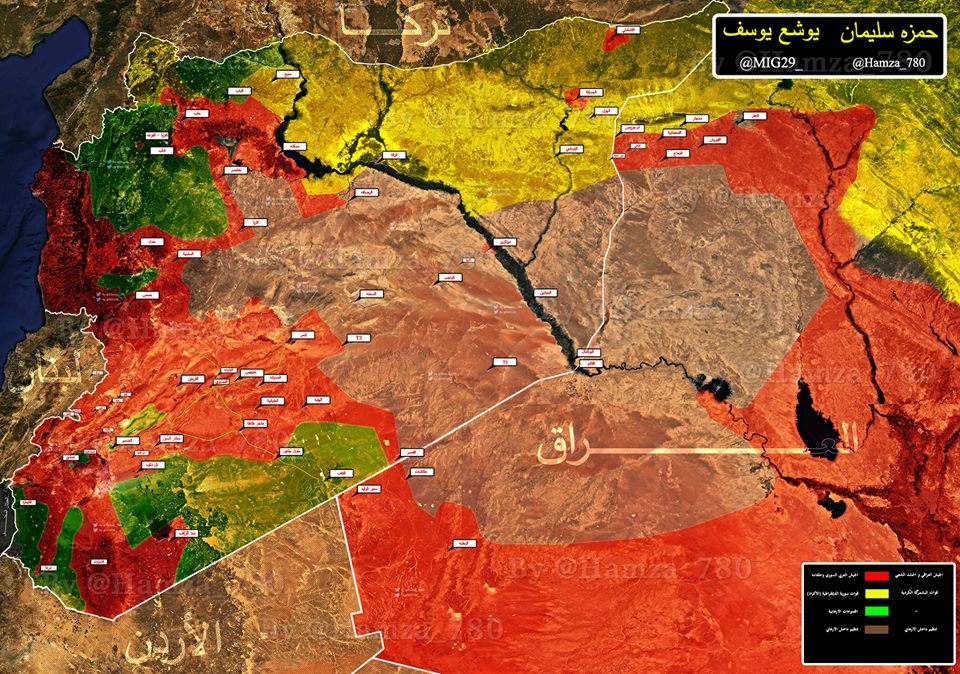 It is not difficult to guess, the area between Resafa and Palmyra in the future will be repainted in red. The division of the skins are not yet up to the end of the killed the black bear continues.

The promotion of the SAA.

In raqqa meanwhile, in the midst of heavy street fighting.

With the deepening in residential construction, the pace fall and losses grow. The sources of the Caliphate reported that in addition to the Kurds among the victims are American soldiers, which is actively used in providing the operations.
Apparently here the example Manuja and al-Baba all long enough. 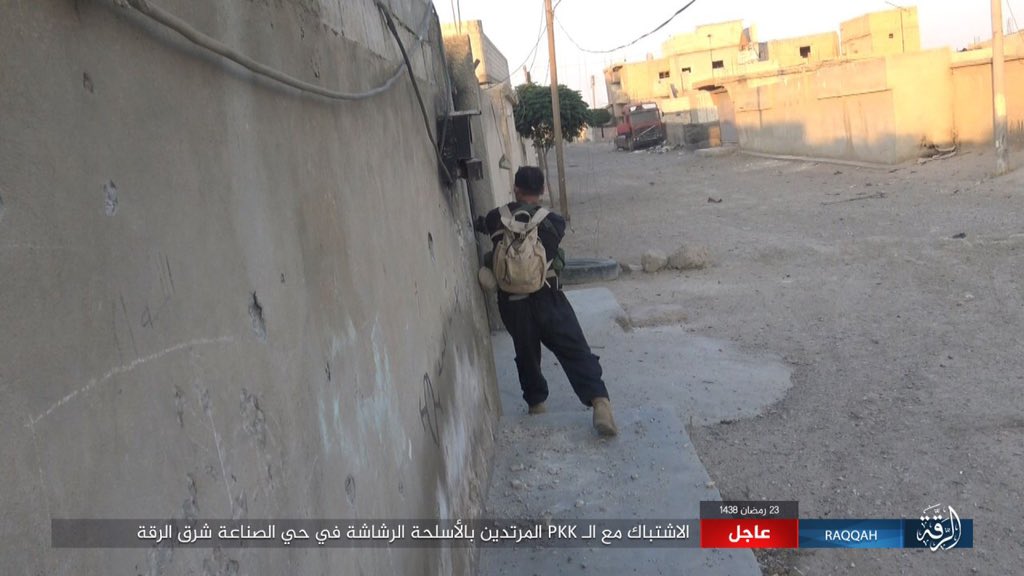 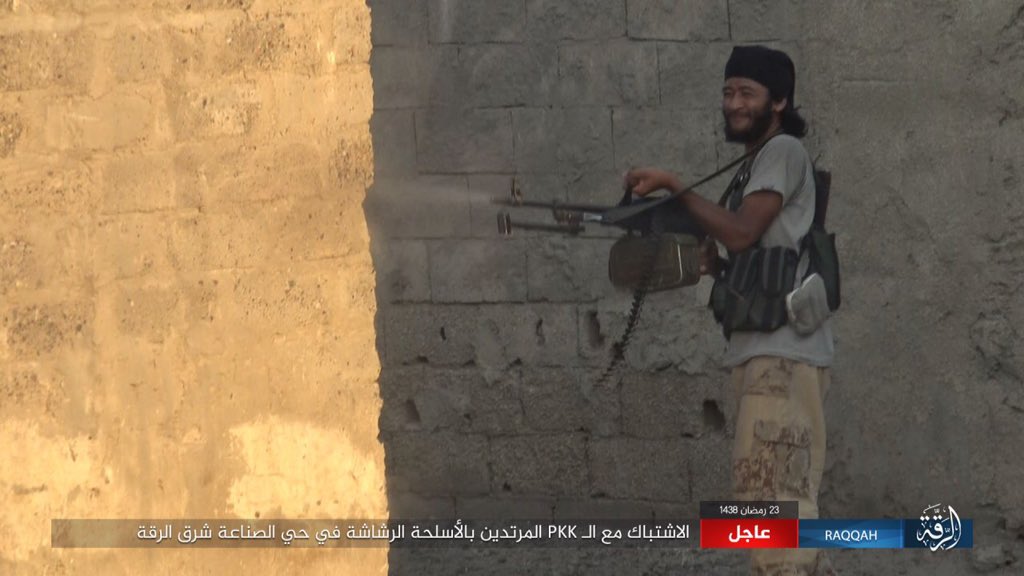 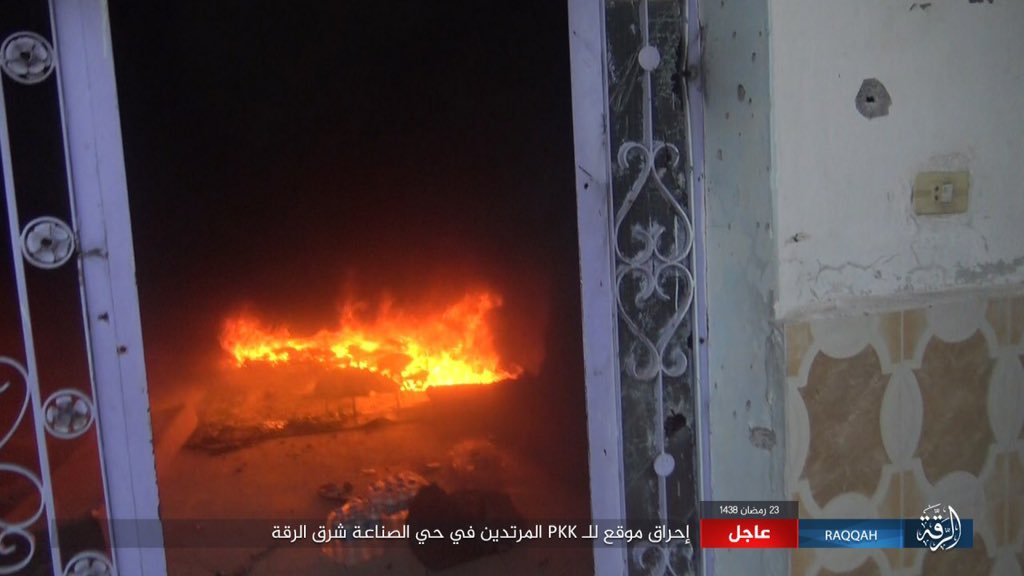 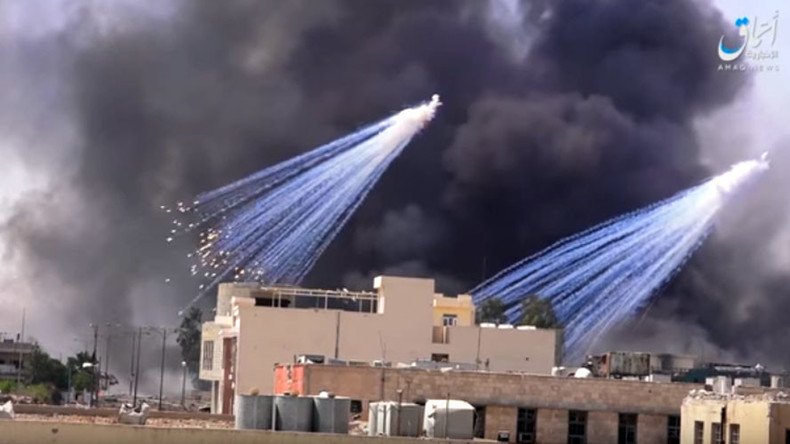 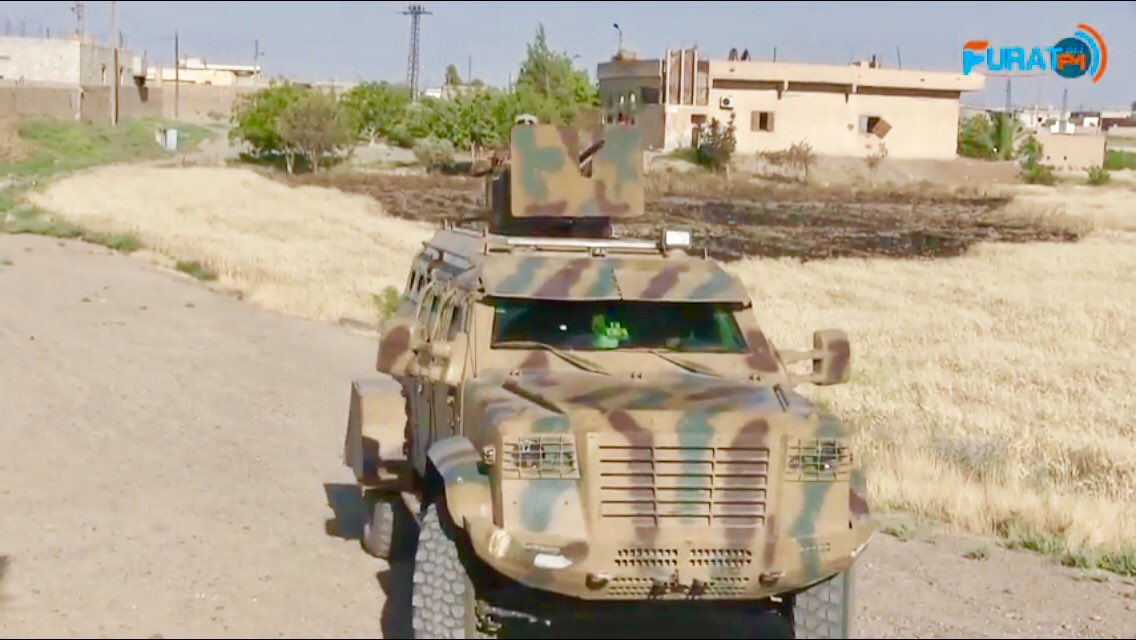 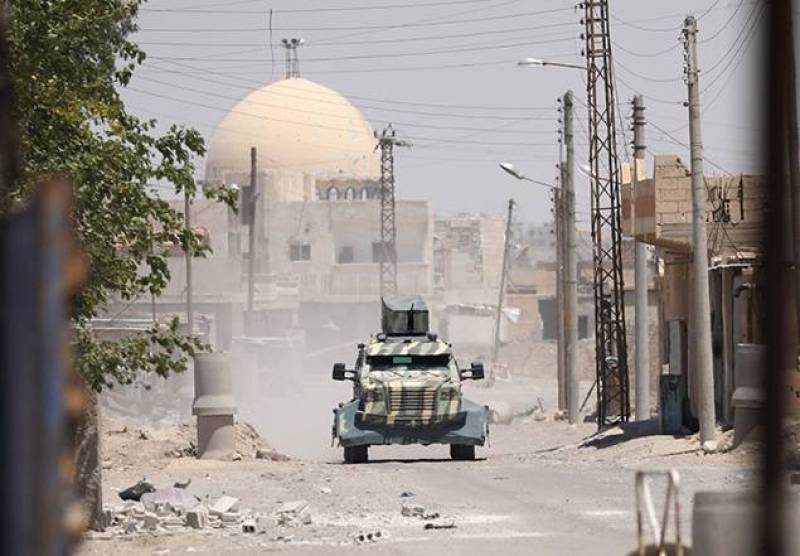 Syrian soldiers in the area of ancient Roman ruins in Resafe. For some reason the militants have refrained from destruction by the example of Palmyra.
Perhaps hands did not reach, perhaps considered insignificant. Here is a description of these places from the magazine “Orthodox pilgrim” made during the war.
So to speak to bring important operational achievement of historical background.

On a broken order “Safa” the taxi driver took us to the ruins of the ancient Sergiopolis, but rather Resave. The capital of the province of al-raqqa has remained behind in the Windows and then flashed a small village, more like a wholesale market. Suddenly the green meadows of the valley of the Euphrates was over, and started the desert Sands. Twenty minutes later the car pulled up to the impressive fortress in the middle of the endless plains.

The history of this place goes back to ancient times. The first fortifications appeared here in the Assyrians in the 9th century BC and during the Roman Empire was built a small Fort, controlling trade routes. Thanks to the advantageous position of the fortress soon became a populous and not a poor town. In the Bible it is referred to as Recep (4 kgs. 19, 12, Is. 37, 12). It was executed by the Roman warlord and the Christian Sergius.

The legend says that Sergios and his brother Bacchus from a young age he served in the army and quickly achieved high officer ranks, which allowed them to take an important place at the court of the Roman Caesar Galerius Maximian. That all changed when the Emperor found out that the brothers profess a new religion – Christianity and refuse to make sacrifices to the pagan gods. Deciding to punish the minions, the Governor demoted them to the soldiers, ordered to dress in a dress and in such a pitiful look to the streets of the city. However, this did not break the faith brothers.Then both were sent to Syria, where he was brought before the Tribunal.

Bacchus was beaten to death with whips and buried in Barbalace on the banks of the Euphrates, and Sergius in chains sent to Resafa where hacked to death with a sword. It happened approximately in the year 305 ad After the death of the brothers began to read in the Christian world as Holy martyrs, and Resafa became a place of pilgrimage to the relics of St. Sergius, a aching received healing here.

In Resafe the temple was built in honor of St. Sergius, which in the beginning of VI century was built new majestic Cathedral. At the same time the city was renamed in Anastasiopolis – in honor of the Byzantine Emperor Anastasius, who rebuilt the fortress. Soon, however, he also issued a decree about the new name of the city in honour of Saint – Sergiopolis. In VII century the city was occupied by first the Arabs, then the Persians robbed. In the VIII century, after the conquest of Syria by Muslims, Sergiopolis became the favourite place of the Umayyad Caliph Hisham. Next to the city Cathedral he is building a mosque and a Palace.

The city lasted until 1259, when the future Sultan of Syria and Egypt Baybars I ordered all residents to move to Hama, fearing the influence of the militant sect of the assassins on the population. Gradually, buildings and walls began to deteriorate, ways to fall asleep sand, and the flow of pilgrims after the defeat of the crusaders exhausted. Last Sergiopolis left soldiers.

Again about the ancient city, the Europeans heard from the caravan five centuries later. Then began the first excavations, which continued until recently. However, on large-scale works can not speak – the majority of buildings are still hidden under the heavy layers of clay and sand is cleared away, only a few sites, including main street and the square at the city’s Cathedral.

Full here https://goo.gl/edDfN7 Plus notable pre-war live 2007 https://youtu.be/K42V9uUAWqc for 4 years prior to the beginning of the attempts to overthrow Assad. You can see that Syria, which no longer exists.

Well, below, soldiers of the Syrian Army in liberated Resave.

On the situation in the area of Resafa.

1. As I write, the Syrians, during the race to a road junction, the SDF lost the race literally on the finish line – the gap was only 2-3 kilometers. At the moment, the SDF sitting in the village North of Resafa four kilometers.

2. A few troops of the Caliphate retreated to the East, forming a thin veil that hardly can restrain the occurrence of the CAA in the event of a further promotion. The collision of the CAA and SDF hardly will help them greatly.

3. Apparent discrepancies in the fate of the pilot of the su-22, of the salvation which yesterday announced Syrian sources http://colonelcassad.livejournal.com/3490603.html. Cousin downed pilot announced https://twitter.com/Syria_Protectorthat his cousin is alive, but is still held by SDF. On the other hand, it is reported that the pilot has been delivered to the hospital in Damascus https://www.facebook.com/alwatan.sy/posts/1450921811633099 In General, strange discrepancies. Waiting for photographic evidence. 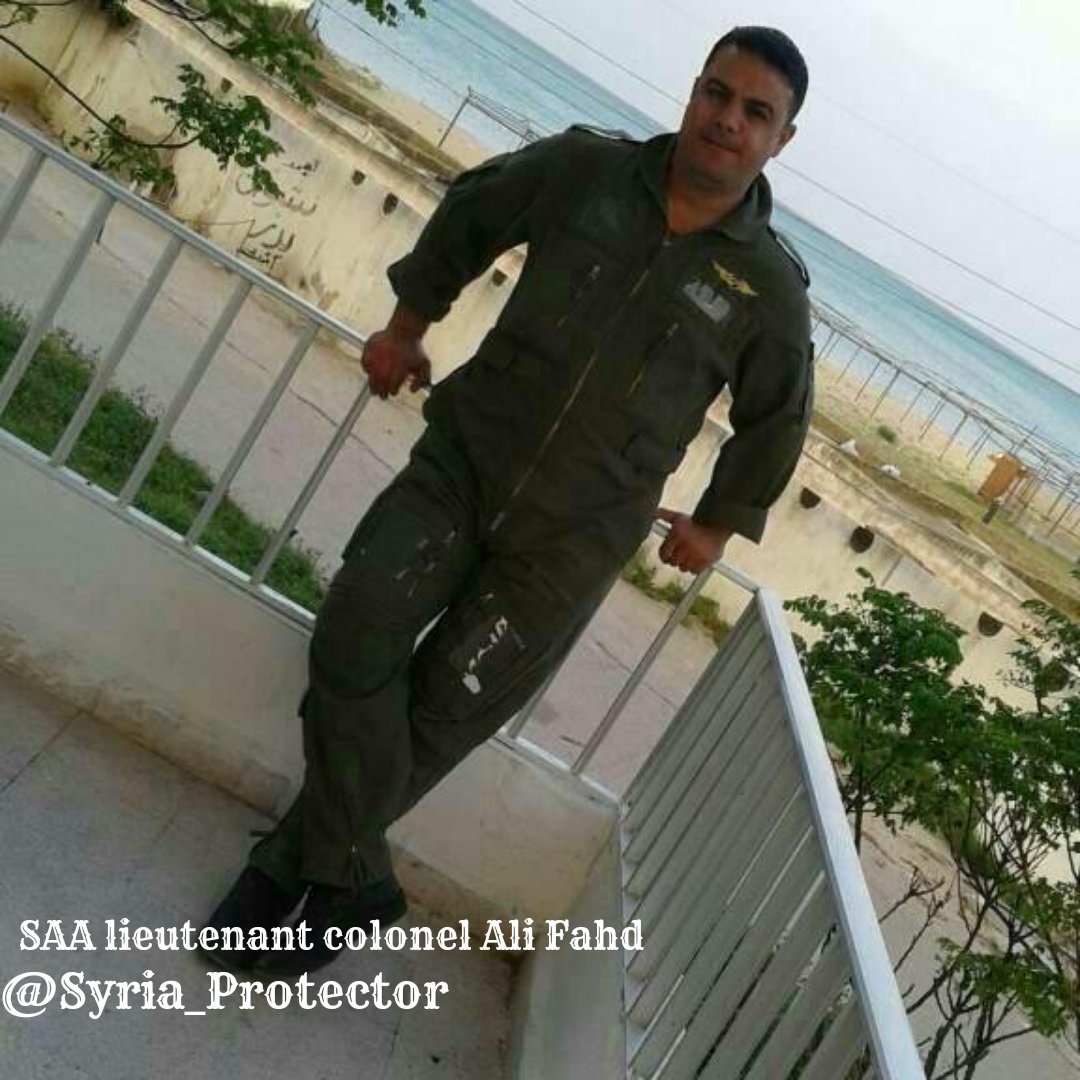 The pilot incidentally shone even on Russian TV, last year he appeared in the report from the air base Tias, where he gave an interview in a flight helmet.

The machine is in the background, most likely the “drying”, which was shot down near Resafa.

4. The White House reacted to the statement of withdrawal from the agreement on prevention of air incidents in Syria. It was stated that the United States reserves the right to “legitimate self-defence” (Orwell resting), but “the risk of war with Russia”. At the same time, the Pentagon is seriously reacted to the announced by the RF Ministry of defense the threats and according to us military sources, zone of the flights of American aircraft have been modified.

During the RAID were rescued pilot shot down by the Americans, the su-22. The pilot managed to leave the downed machine and was on the territory occupied by the enemy.

During the rescue operation, Syrian special forces entered into battle with forces of the SDF.

In the end, Ali Fahd was discovered and evacuated to SAA controlled territory.

And another from a turnover.

The SAA is developing an offensive in the area Itree. In the coming week we can expect the numbers of forces coming from the highway Khanasser-Aleppo, with troops operating on the South Bank of the Euphrates.

Over the past two weeks, SAA has liberated the East from Aleppo more than 3,000 square miles of Syrian land.

USA in response to the statement of the defense Ministry http://colonelcassad.livejournal.com/3490396.html on the termination of cooperation on Syria, stated that they were quite mechanism of cooperation with Russia in Syria, but they will “change the positioning of its aircraft in Syria”, whatever that means.