Conduct – Deputy head of main operational Department of the General staff Colonel-General rudskoy and the commander of the Russian group in Syria, Colonel-General Surovikin. 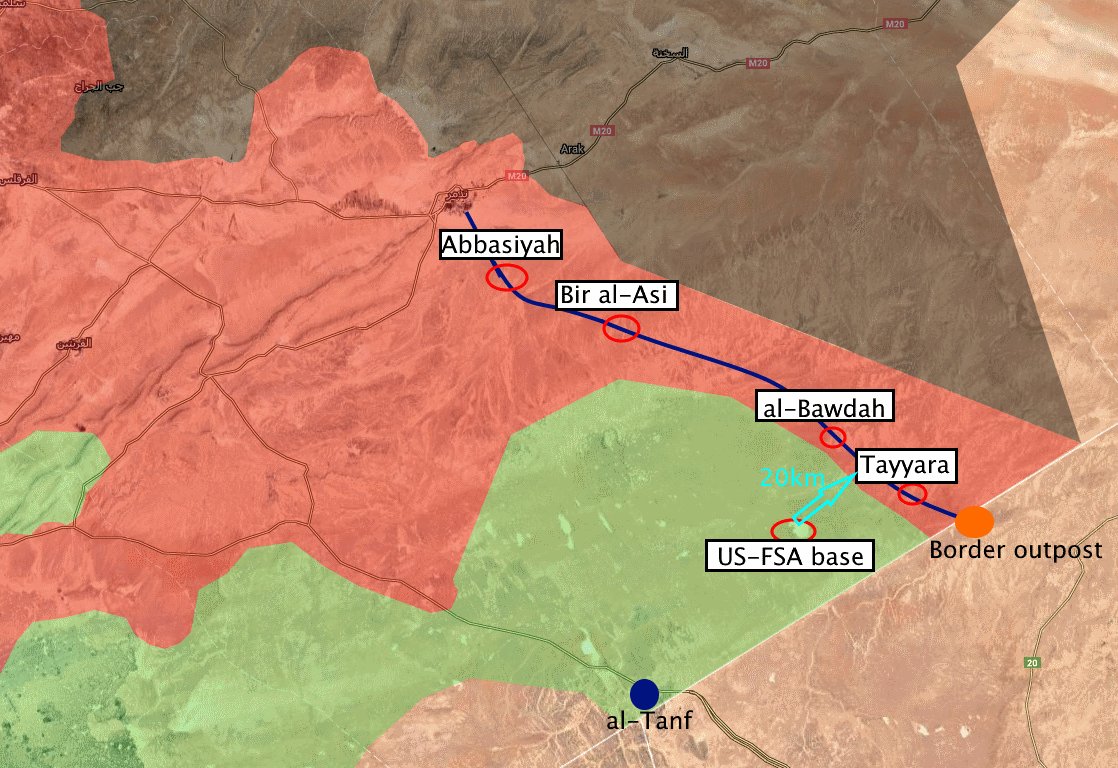 Yesterday, the General staff, and after that, and sources “Hezbulla” and the CAA confirmed that there was a March to bypass the At-Tanta and access to the border. In fact, thus is a kind of unit for the us plans in Sweida.
By training militants in Jordan in cooperation with the British and the Jordanians, the United States first to use Jordan as a springboard to log into Suweida, and then began to use the already occupied parts of South-East Syria for operations of the “New Syrian Army” (purely Agency’s creature) and affiliated groups. The formal pretext – the war against the Caliphate. Al-TANF in this scheme was a training camp for militants and a base for forward deployment, where it was placed on the order of 100-150 people from the special units of the US and Britain.Last summer this area had been the attack on Abu Kamalhttp://colonelcassad.livejournal.com/2833358.htmlthat ended in shameful defeat and epic drape 200-250 miles ago.(Caliphate of the first half of the summer of 2016 has been very successful – the victory at Abu-Kemal and Tabqa allowed black to raise shattered the military prestige). It is largely thwarted the American plans to expand its influence in South-Eastern Syria.Iran’s attempts to advance towards Al-Tantu directly, tried to stop air strikes and propaganda. It is not difficult to notice, it did not take effect. While Americans frantically tried to prevent a direct promotion to At-Tapu, was made a kind of workaround – mechanized group just moved to the border East of Al-TANF and without encountering much resistance, came to her in the evening of June 9, completely cutting off the United States and To, from the rest of Syria.It is important to understand that the Al-TANF and adjacent desert, of little value in themselves do not represent.But if we consider them as a springboard to promote their operations in Central and South-East Syria, that is another matter.

These intentions did not escape the Russian-Iranian coalition and Americans in fact returned the favor for the Tabqa. At the time, the U.S. crossed the Euphrates, put the unit for the promotion of the Syrian army to Tabqa and raqqa. It’s time to return the debts. First, the Syrian army cut off from the Syrian-Jordanian border and Americans East Kalamun (who vainly hoped for a connection with forces of fighters from Jordan), and now cut off the American forces on the border from the rest of Syria, in particular, eliminating the opportunity to attack along the border to Abu Kemal.Along the way, the problem connecting with the Shia groups coming to the Syrian-Iraqi border with Iraq.

Abu-Kemal, as one of the strategic goals, has long been in plans to the United States, but it is likely that to re-March on Abu-Kemal never will, especially if in the coming weeks, the Shiite troops from Iraq will enter at the border in contact with the colleagues from Syria and across a land bridge, will begin the transfer of manpower from Iraq to Syria, which will be used to further the liberation of the South-East of Syria, with subsequent promotion to Abu Kemal.

Americans, understandably could not make as if to leave everything as it is, it turns out that the whole strategy of using Jordan loses all meaning. Control over a piece of desert near the border, this is clearly not what the United States wanted to achieve by bolstering actions in South-Eastern Syria. Judging by the stuffing in the American press https://ria.ru/syria/20170610/1496243103.html The United States has had unofficial talks with Russia on “zones of de-escalation” in the area of At-Tanta. But the current configuration of zones of influence, it is rather beneficial to Iran, since the termination of attacks of the American “proxy” in Iran that would allow Iran to seamlessly continue the construction of the land corridor, while the Americans will be sitting in the “zone desolatio”, while they actually lose about is in Syria, as this territory is no longer bordered by the territories held by the Caliphate.

There is a serious likelihood that the United States will try to incite stretched to the border of the operational guts of their “proxy” to “continue the war with the Caliphate”. Rumors of a new air strike in the area of At-Tanta while not completely confirmed, but this aggression against the actions of Pro-Syrian groups, a sign of rising irritation USA current developments in South-Eastern Syria. On the other hand, the limited power in Jordan and the coming of the flow contingents of Shiites from Iraq, dramatically reduce the chances of Americans replay the situation in your favor.Perhaps in response, one should expect activization of actions of fighters in Deraa and new airstrikes. But this is rather vague, and yet, the US clearly inferior to Iran and To the competition abroad. 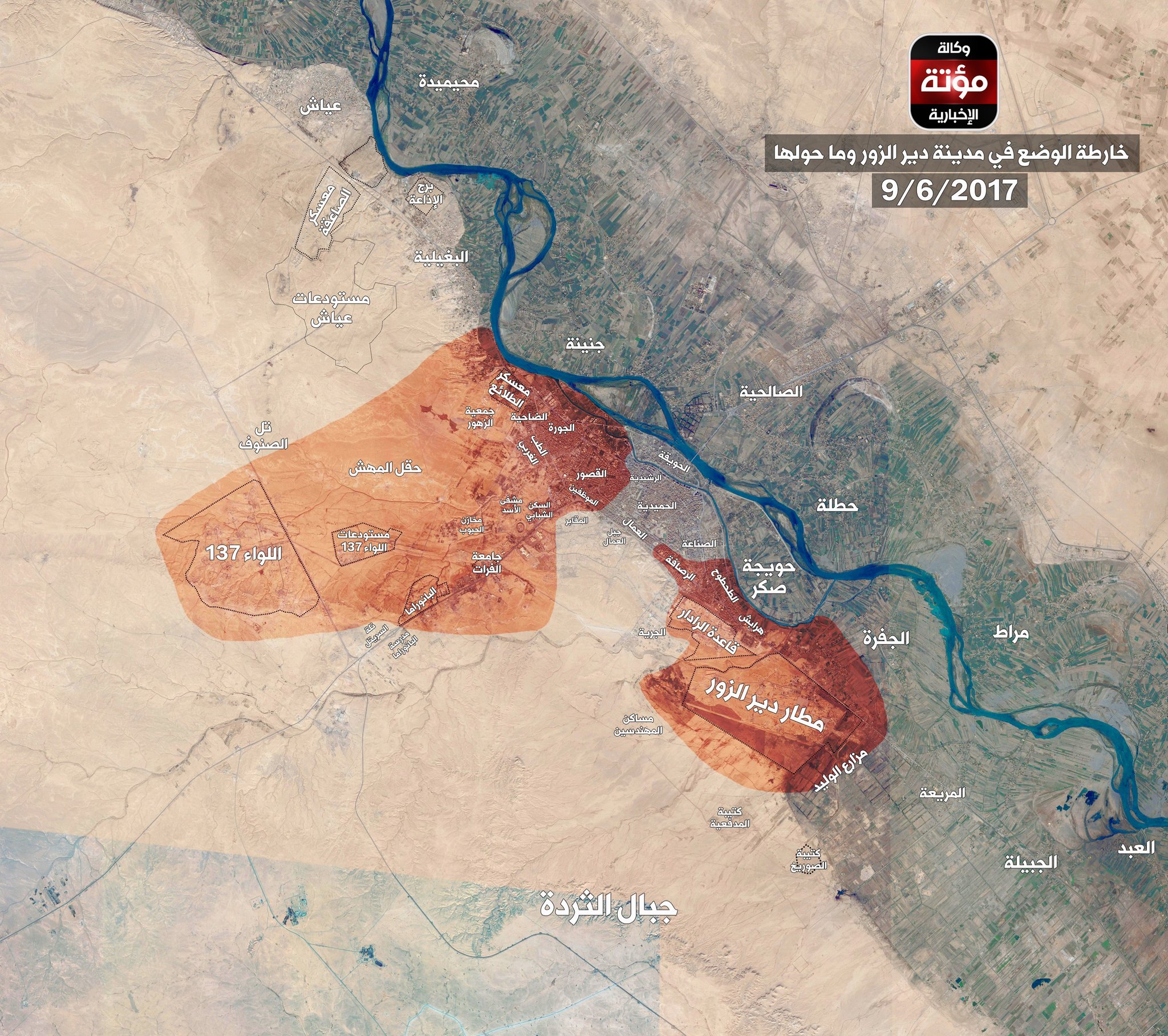 Russian-Iranian coalition in the case of successful relief of problems of At-Tanta, can begin to advance across the desert to the Euphrates, towards the exit to Abu Kemal and Deir ez-Zor.
The latter way once again survived. The attack by the militants was repelled, (https://twitter.com/MmaGreen/status/873274539320508420 – Syrian soldiers celebrate in the reflection of a 4-hour attack fighters), and part of the lost positions few days ago, again back under the control of the SAA, including positions on the basis of “Panorama”.

The current war is definitely encouraging, but of course before.

The hike to the border

For illustrations http://colonelcassad.livejournal.com/3471838.html. Promotion of mechanized group to the Syrian-Iraqi border and the subsequent equipment items at the border.

The group came to the border size is frankly small. You notice a tank, IFV, helicopter, a dozen carts, construction equipment.

The early stages of progression. The beginning of June.

In this video, the group simultaneously released the ruins of the ancient baths of Queen Zenobia, that in antiquity the rules of the Palmyrene Kingdom.

Binoculars the video they look out for large mechanized group “Hard-SHAABI” which is coming to the Southeast, advancing on Iraqi territory, which is still in control of the Caliphate.