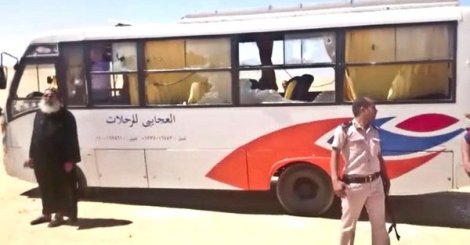 At least 26 people were killed and 30 were injured in the shelling of two carrying Christian pilgrims buses near the monastery of St. Samuel in the Egyptian province of Minya. About this informed the official representative of the Ministry of health of Egypt. Meanwhile, according to several sources, the number of victims of the attack reached 35.

Most of the dead were children. This is reported by news portal Al-Ahram, citing representatives of the Coptic Church. According to them, in one of the buses were about 40 young Egyptians, in the second driving adults.

It is already known that the attackers fired at the buses of the two SUVs. Indicates that the attack involved at least 10 militants dressed in camouflage uniforms and masks. Police conducting the sting, the area of the incident cordoned off by interior Ministry special forces.

Over the past six months, Egypt has witnessed several major attacks, the purpose of which was local Christians. So, on April 9 in Christian churches in the cities of Tanta and Alexandria during the festive service on the occasion of palm Sunday was a terrorist attack, which killed more than 45 people, and over a hundred were wounded. Responsibility for them was assumed by the terrorist group “Islamic state” (IG, is prohibited in Russia). Following the attacks in the country, President Abdel Fattah al-Sisi declared a state of emergency for a period of three months.

In December, a powerful bomb exploded in the Church “al-Buttrose”, located on the territory of the complex of the Coptic Cathedral in the Cairo district Abbasia. Victims of this attack were 27 people, about 50 were injured. About his involvement in the RAID also said the IG.

PS. It was “advertising” holiday in Egypt, which continues to profoundly fuss about security in the Egyptian airports https://www.votpusk.ru/news.asp?msg=550588, where Egypt refused to let the Russian security professionals.

PS2. According to the revised data, killed 28 people.

One response to “The massacre of pilgrims in Egypt | Colonel Cassad”