The police take by storm “the headquarters of the OUN” in Kiev:

Do not think that this is some kind of Epiphany or “the transition of the police on the side of the people”. Just now, in Kiev held a “contest” and open attacks of the Nazis on veterans and other improper conduct, we must hide until after the event. Therefore given the go-ahead a bit to beat the “patriots of Ukraine” to create the appearance of adequacy, which however does not smell http://colonelcassad.livejournal.com/3407773.html. Here they call it “a free and democratic country”. Where there is our “totalitarian Mordor” http://colonelcassad.livejournal.com/3408051.html Nobody on veterans ‘ attacks of portraits of collaborators is not. Horror and only.

Well, so of course, when the Germans get clubbed in the head, that’s right.

Especially for those who thought that following yesterday’s http://colonelcassad.livejournal.com/3408295.html, there have been some significant changes in the approaches of the Ukrainian authorities towards the relationship with Nazi organizations.

“After a preliminary review of incidents and provocations in the river: in the morning signed the order for dismissal from office: the chief of police Department in Dnipropetrovsk region, General Repeshko; the chief of a municipal police Department of the Dnieper, Colonel Bidylo; appropriate alternates to ensure public safety,” he wrote.

In addition, Avakov announced the appointment of an official investigation of the clashes on may 9 in the river. “A special investigation team and sent to the Dnieper – to investigate the actions of civilians and their coordinators within the criminal proceedings. The results will be publicly released,” – said the Minister.
We will remind, on may 9 in the river on the shares of Victory Day over Nazism in the Second world war scuffle – injured 14 people, including 6 police officers and 8 participants.

Mayor of the Dnieper Boris Filatov instead of the veteran, the organization decided to allocate funding to the Union of veterans of the ATO. About this he wrote on his page in Facebook.

“Today I close the urban the funding of all the “veterans” organizations. Hitrozh@Pye fighters Kolchak fronts 46 year of birth out of the Executive Committee feet. Forever. At the next session of the city Council of the city will be allocated to the financing of the Union veterans of the ATO”, – Filatov wrote.

Also, the mayor warned that he is ready to create its counterpart to the police.
“If the situation does not change, the city will create an analogue of the German ruthless of the early 20th century. I don’t want to develop this theme, but I can tell how cotton ass break from the horror. Yes, history is nothing new. And bad she walks in a circle. If the government cannot protect people, then they have the right to do it,” wrote the mayor of the Dnieper.

PS. It is logical that those who gave the order to beat the Nazis, can’t hold public office in a fascist state. Those who attack veterans, can not touch, only in exceptional cases for tactical reasons. Those who put up resistance to the Nazis – it is necessary to dismiss and deny any funding. That’s all you need to know about modern Ukraine and its attitude to fascism. And it is a member of pakora and future Waffen SS General Josef Dietrich.

And this is the symbolism of “the Thule Society”, which worked closely with prakaram.

Filatov as usual, more revealing than the other huntyata directly holds the Association between modern Ukrainian punitive and members of pakora that in the Weimar Republic served as a breeding ground for right-wing and fascist organizations, many of whose members later found themselves in the SS and the SA, forming a power fist in the service of the NSDAP. This is so to say one stroke to someone belonging to the current power in Ukraine. Therefore, you should not have any false illusions about some kind of mythical understanding of these figures.

In Nikolaev the Nazis attacked the Afghan veterans

And continuing the theme of “Punishment” http://colonelcassad.livejournal.com/3409496.html. At this time, in Nikolayev, where yesterday the Afghans beat the fascist provocateurs. Today, for it was followed by retribution.

On Wednesday afternoon, may 10, about 30 people — members of right-wing organizations of Nikolaev attacked the office of the Association of veterans of combat operations in Afghanistan and reserve soldiers.

As we found out the “News-N”, at about 11.00 in the office a number of people came under the guise of “truce” – to talk about yesterday’s skirmish during the celebration of Victory Day. However, the conversation did not take place — following the “truce” broke into the office unknown persons in masks and began tearing up the flags, standing in the waiting room. The attackers were about 30 people, among them were members of the civilian corps “Azov”. In the office at this time was 7 people. The first assailant jumped to the head of the Association Yuri Soloviev, followed by two more. 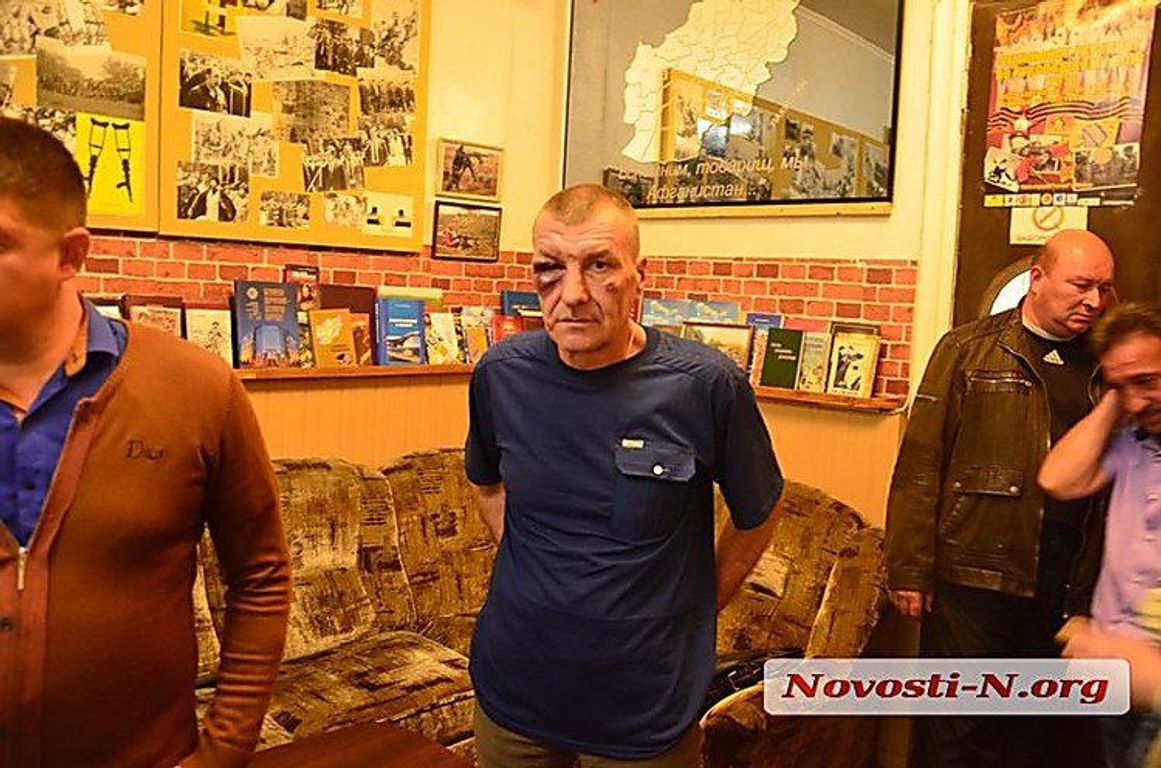 Nightingale and his companions then knocked down and beaten. Most got it the Nightingale he struck his head with a metal bar, he has a compound fracture of a finger on his left hand and multiple bruises. In addition, were beaten by three others. A minute later the attackers ran out of the office. Currently, the office of the “Afghans” at the St. Nicholas surrounded by police.

Especially the attackers are not hidden — they are a separate group here, near the office. No attempt to arrest the police are making. Right-wing radicals do not hide that the attack on the office of “Afghans” – it was revenge for yesterday’s incident during the celebration of Victory Day.

Funny, but yesterday on the same site, anticipated today’s violence pointed to the inevitability of further radicalization.

Overall, today’s celebration leads to sad thoughts. It demonstrated that our society is divided — deeply, seriously and permanently. No unity, about which so fond of saying high-ranking officials in Kiev, is not in sight. Society is divided into two large groups with different heroes, different values, diametrically opposed views on the situation in the country and the ways of its further development. And no reason to think that in the near future this situation will change, no. This conflict lasts for years, even decades.The saddest thing is that none of the parties are not only ready to any compromise, but do not want their ideological opponents to hear. What’s the public dialogue here and monologues all the time, then turn into something between hysterical and epileptic seizure. “They don’t want to talk to each other, they want to kill each other” – so figuratively, but very accurately described the situation one of the participants of today’s events.

Many are trying to bring the current standoff to a conflict of generations — say, it’s all about “old people” who cling to “old” values. That soon they, the old people naturally will go — and there will remain some solid patriots. Point of view is as widespread as it is erroneous. To doubt its truth, just look at today’s column “Immortal regiment”: in young and middle age were found much more frequently than the elderly. And if so, then social conflict in our country have a long life.

And one more scary trend is highlighted today’s feast: the radicalization of THOUGHTS and SENTIMENTS will inevitably lead to the radicalization of ACTION – and this is no joke. As mentioned above, the current Victory Day was richer in incident than the last. Especially revealing in this sense, the skirmishes with the Afghans. Last year the column of veterans of Afghanistan and the interior Ministry is not something that attack — approach feared. As soon as in 2016, “the Afghan” convoy appeared on the Admiral’s, all of their opponents like the wind. This year everything is different — it is clear that nationalists and right-wing radicals held a “work of mistakes” and behaved much more aggressively. And what will happen next?After all, the path of radicalization is not new and well known: just beat today the toes, tomorrow the course is tear gas and smoke bombs, and the next day start to throw grenades and shoot. Exactly what happens with an increase in confrontation. And given how many weapons today walking uncontrollably in the hands of the population, such a development is almost inevitable.

Today, the government is stubbornly tries to ignore the deep social conflict, making “a good mine at bad game” and expressing “the unprecedented unity of all strata of the Ukrainian society” on the eve of the coming bezveza and “trip to Europe”. Any good similar ostrich policy can not lead and, unfortunately, the witness will become all of us in the near future.

is the Author of course still the sloupok – radicalization goes back to 2013. Apparently while he’s in town such did not happen, he preferred to remain in blissful ignorance.
Compromise, of course not, and that gives the inevitable continuation of the civil war in Ukraine. 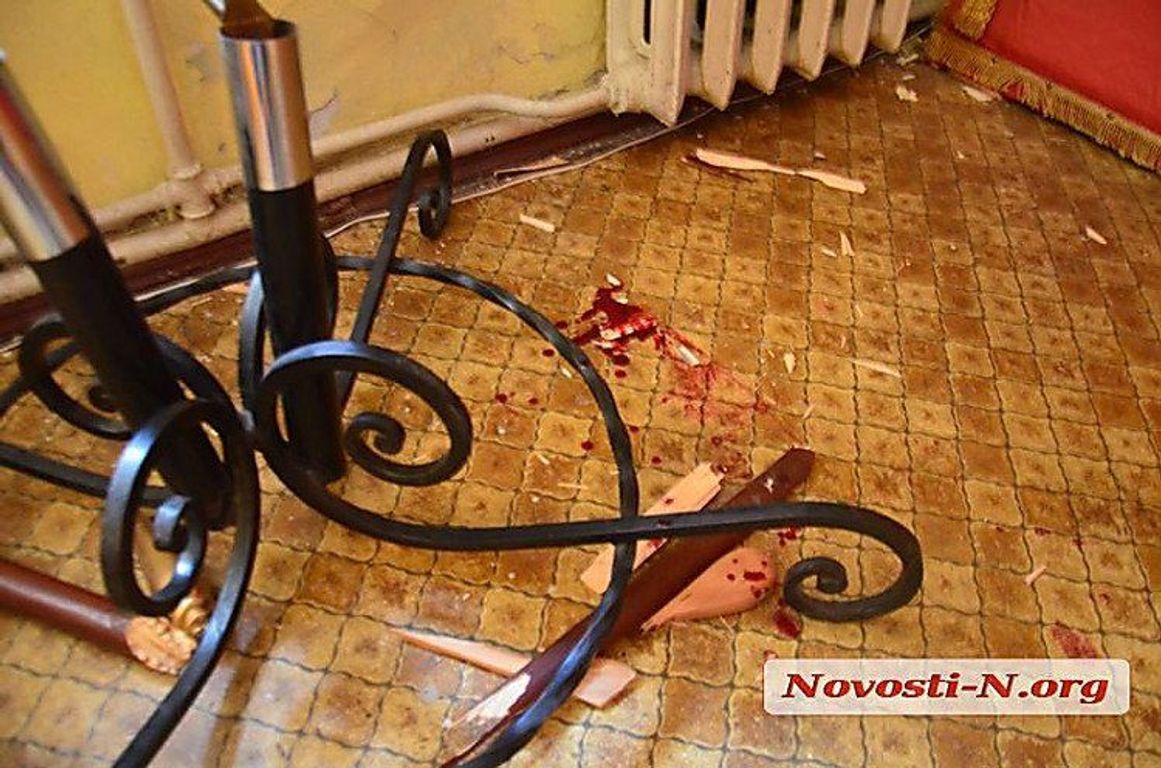 It’s not Kremlin agents that beat and kill each other it is the citizens of the former Ukraine.