Mikoyan MIG-31, supersonic all-weather long-range jets fly over a statue of an angel fixed atop the Alexander Column during the Victory Day military parade in St. Petersburg, Russia, on Tuesday, May 9, 2017. Victory Day is Russia’s most important secular holiday, commemorating the Red Army’s determination and losses in World War II. (AP Photo/Dmitri Lovetsky)

A T-14 Armata tank rides through Red Square during the Victory Day military parade in Moscow on May 9, 2017. Russia marks the 72nd anniversary of the Soviet Union’s victory over Nazi Germany in World War Two. / AFP PHOTO / Natalia KOLESNIKOVA

Best of the Best: Military Hardware Showcased at Victory Day Parade in Moscow

On May 9, Russia celebrates the victory over Nazi Germany in the 1941-1945 Great Patriotic War. On Tuesday morning, the annual military parade was held on Moscow’s Red Square to commemorate the 72th anniversary of one of the most glorious dates in Russian history. 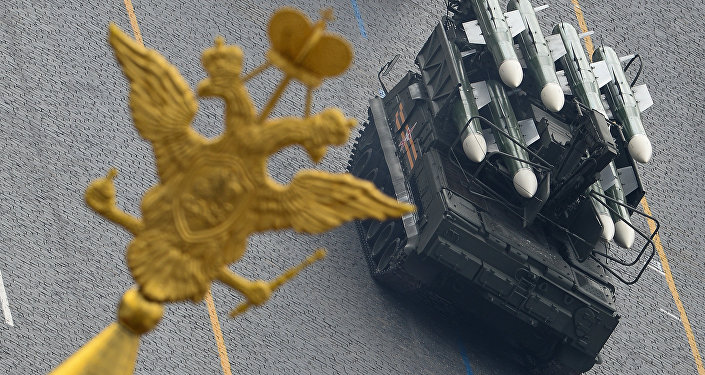 Usually, the parade consists of three major parts – the infantry march, the procession of armored vehicles and an aerial column, including military helicopters and warplanes. However, this year the aerial part of the program was cancelled due to cloudy and rainy weather in Moscow.

The event involved over 10,000 servicemen of different branches of the Russian Armed Forces as well as 114 units of military hardware.Here are the most interesting pieces of military equipment showcased at the Victory Day parade in Moscow.

Both vehicles are mounted on the Vityaz full-tracked chassis, enabling it to be operated in the Arctic’s highly rugged landscape. The chassis is also capable of climbing near-vertical slopes and crossing water obstacles without losing much speed.

The Tor-M2DT system was developed using the Tor-M2 missile launcher for Russia’s Arctic military group and has already been deployed on the Franz Josef Land archipelago. The system is capable of defending the airspace within a radius of at least 15 kilometers.

© Sputnik/ Alexandr Vilf
Tor-M2DT at the military parade in Moscow marking the 72nd anniversary of the victory in the Great Patriotic War of 1941-1945.

The Pantsir-SA system was first commissioned in the Russian army in late-2016. It uses the Pantsir-S1 launcher and is adapted to temperatures below —50 degrees Celsius. The system has on operation radius of 20 kilometers.

A column of cutting-edge T-14 Armata tanks and a T-72B3 tank of the 2nd Guards Tamanskaya Motor Rifle Division hit the cobblestones of Red Square during the parade.

The T-14 is built on the Armata Universal Combat Platform. The armored vehicle is operated by a crew of three, sitting in an armored capsule at the front, while its turret is unmanned. Its weapons include a 125-mm smoothbore cannon and a 7.62-mm remote-control machine gun.

Moscow – Russia – 09/05/2017 – Russian servicemen parade with tanks during the 72nd anniversary of the end of World War II on the Red Square in Moscow.

The Typhoon-K is a 21-ton 19 person-capacity armored vehicle. It is on the Kamaz-63968 chassis, has a 450 horsepower engine and is capable of reaching speeds of up to 80 kmh. The cab of the vehicle is equipped with an on-board information and control system, providing data regarding engine operation, tilt, speed, and location, as well as real-time video readout of the vehicle’s surroundings.

Typhoon-U enhanced protection armored vehicles during the military parade in Moscow marking the 72nd anniversary of the victory in the Great Patriotic War of 1941-1945.

Typhoon-K vehicles have been spotted in Syria, used by units of the Russian Military Police.

One of the most outstanding features of the Typhoon family is its excellent armor protection, including integrated ceramic and steel armor and mine protection.

The Pantsir-S (NATO reporting name SA-22 Greyhound) is a combined short to medium range surface-to-air missile and anti-aircraft artillery system. Its current version entered service with the Russian military in 2012.

The system uses advanced phased-array radars for both target acquisition and tracking. 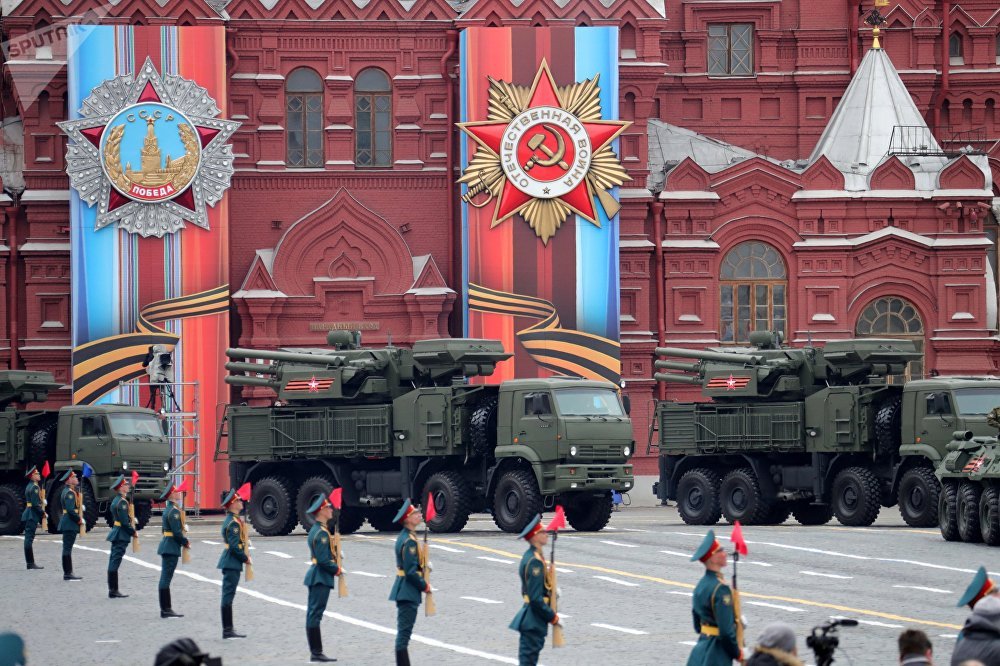 A Pantsir-S air defense system during the Victory Day Parade on Red Square.

The system is armed with a pair of dual 2AQ38M 30 mm automatic cannons and up to 12 57Eb-E radio-command-guided surface-to-air missiles capable of hitting targets up to 20 kilometers away and at altitudes of up to 15 kilometers.

The Buk-M2 (NATO reporting name SA-17 Grizzly) is a self-propelled, medium-range surface-to-air missile defense system with the. It comprises a command post, a target acquisition radar and up to six loader-launcher vehicles carrying four ground-to-air missiles. The Buk-M2 can simultaneously engage up to 36 targets. The system is capable of hitting targets within a range of 35 kilometers and an altitude of up to 25 kilometers, depending on the modification. 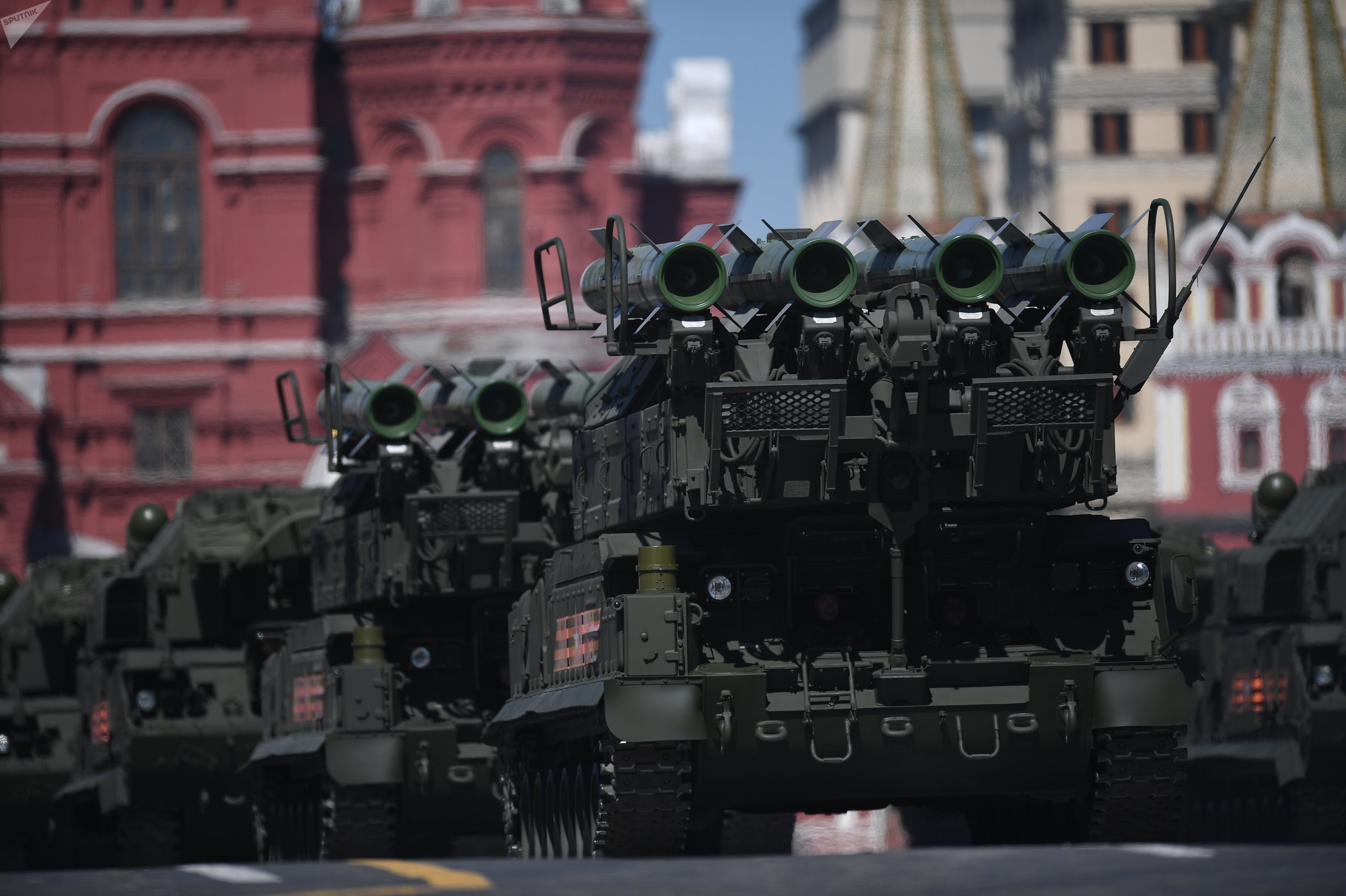 The Tor-M2U is a new-generation short-range missile system of the Tor series. It is designed for protecting military and civil facilities from aircraft, missile and bomb attacks.

The system is capable of recognizing simultaneously more than 40 targets, classify them according to the level of danger and attack four targets with rockets at the same time. The guided missiles of the Tor were specially developed to intercept small-sized maneuvering targets.