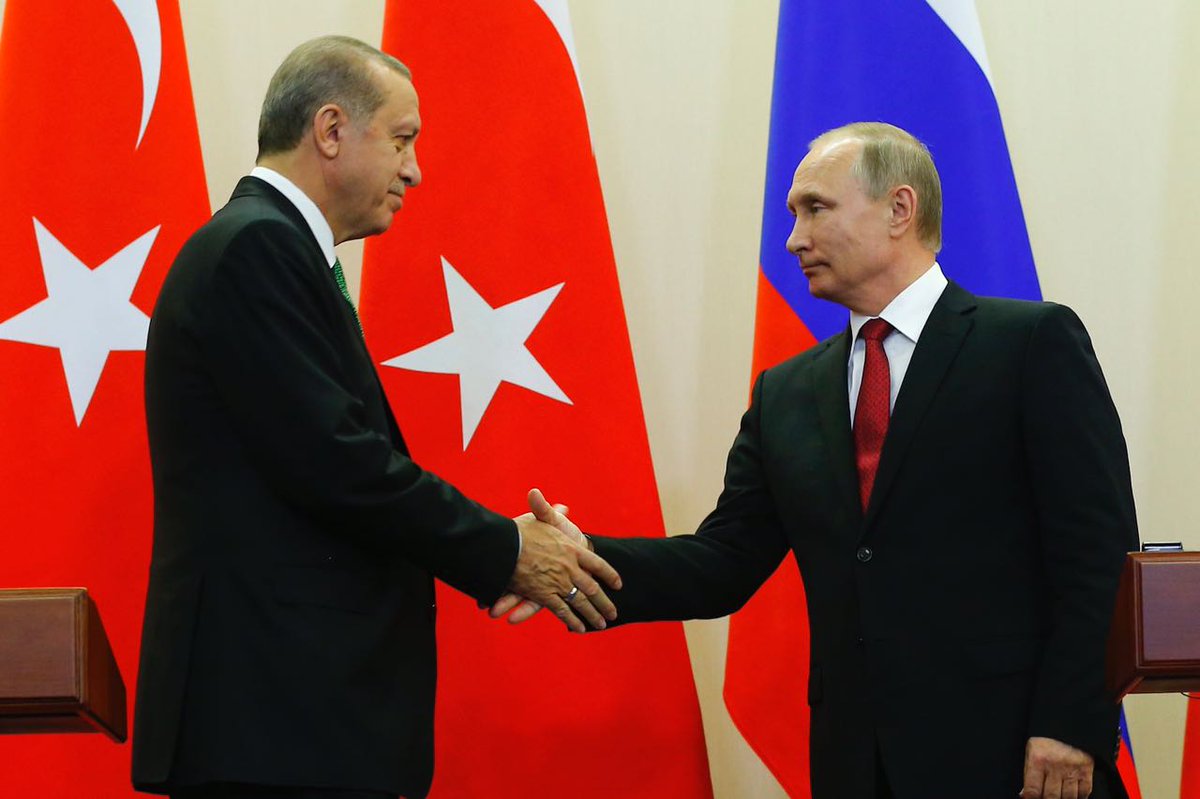 The official results of the talks with Erdogan show that despite the loud statements by Erdogan about Assad and various minor provocation, their main arrangement Erdogan does, which causes a further normalization of relations with Turkey, which allowed the Assad regime and its supporting coalition, to significantly improve its positions in the Syrian war, and Erdogan also did not remain in the loser, again coming back to the big Syrian game where he almost took off after the incident with su-24.

Now Turkey, despite its vacillation, trying to pursue their own policies, but in General the number of points she is forced to reconcile with Russia and Iran on the one hand, and USA on the other. Erdogan did not become one of the ally coalition, but remained in many respects a valuable companion. If we talk about the main benefits of Erdogan to Russia, we can distinguish two aspects:

the first – Holding the part of the militants from taking action against Assad, erdoğan actually allows implemented some tracing with Russian-American deal in 2016, when the cessation of hostilities against some factions, has allowed Assad to amplify attacks on others that immediately impact on front line. The deal with US fell asleep in the Lord even under Obama, but as it turned out, such a scheme can be turned without US at all, agreeing directly with Erdogan, who controls a certain part of the groups and in fact dispose of them as its strategic asset.As a result, the part of the fronts of the fighting died down, part of the enclaves under the guise covered, and Assad had the opportunity to focus their not a limitless power on other, more important areas. Turkey, in return, received from Russia and Iran the opportunity to drive a wedge between the Kurdish areas of Northern Syria in order to break the American plan with a large Syrian Kurdistan. That is, the transaction is quite a work and a significantly changed strategic landscape of the Syrian war.New proposals related to the suspension of hostilities in some areas of Idlib, the Eastern Guta and Deraa apparently pursues the same goal. In the Northern Hama the battle in positional phase, in Deraa continuing heavy urban fighting without concrete result, chopper kabune also delayed.It makes sense to put the event on pause, and spend regrouping, preparing to wait for new connections with Russia, and a possible pause, to be used for operations against the Caliphate in the West of Raqqa (depressing the part of the province until it was occupied by the Americans and Kurds) in Eastern HOMS (where due to the weakening of the Caliphate, there are good prospects) and try to release of Deir ez-Zor. The key point in all of this – if Turkey will be able to perform its part of the deal, since some groups get their orders not from Ankara and from Riyadh.On the other hand, very tempted to get success in Northern Hama more operational results, in particular, to cut El-Latinski of the ledge, and then make deals with Turkey.

The time of the second – flirting with Turkey has allowed Russia and Iran to seize the diplomatic initiative and start the format of the talks in Astana, which was created to bypass the United States and Saudi Arabia, as an alternative to the Geneva format. Turkey was able to provide due to their podopechnyh militants, the formal representation of the opposition in the talks with Assad, then the West is urgently rushed through hoops, trying to put the talks in Astana in the complete dependence of the Geneva format.In the end, it is obvious that without agreements with the United States and Saudi Arabia, to achieve peace in Syria would be problematic, but with the help of Turkey, Russia and Iran showed that these countries are important, but it is not mandatory that has made a significant impression on the major players of the middle East war.Turkey in all of these diplomatic games of their interest – playing up Russia and Iran in their competition with the United States and Saudi Arabia, Turkey tries to play the role of “Golden share”, at least “expensive”, then Russia (vbrasyvaya suggestions about rental Incirlik), USA (predlaga itself as a replacement for the Kurds in the assault on Raqqa). In this regard, Turkey tries a variety of tactical improvisation to compensate for the global strategic failure 2015-2016, when she was left with nothing.As we can see by its actions and statements, not all the necessary conclusions were made by Turkey and it is still very chaotic to position itself, while demanding to remove Assad, berating Europe and the intrigues of the Americans. It is quite clear that such a native “partner”, it is necessary to behave very carefully, because today he scolds Merkel and prevent the Americans, and tomorrow he can switch priorities. But so far it helps rather than hurts.

Overall, while Erdogan basic parameters of the deal with Russia and Iran performs with Turkey will be moderately normal relationship, the truth about the old sugary assurances of friendship you can forget, now it’s pure business and transactions on the principle “I scratch your back, you.” Judging from past negotiations, business is going well, but the fact that Turkish tomatoes are still not allowed, tells us that certain problems persist in the relationship. 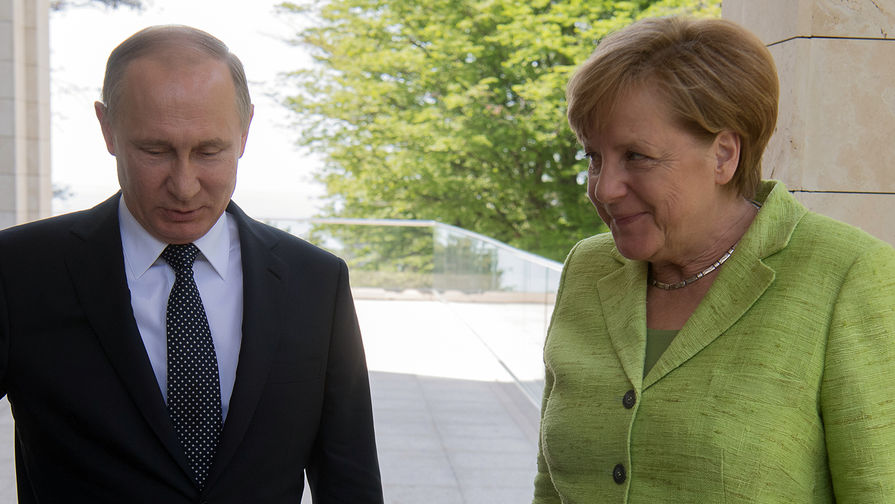 Merkel’s visit was more routine-predictable. Both sides once again read the mantra about no alternative to the Minsk and Normandy formats, it is obvious that in practice no diplomatic resolution will not have, as they lack the US, without a contract with which to end the war in Ukraine will be difficult. Sanctions or to withdraw or to expand will not. To influence the Kiev Merkel can not, and do not want.She already long been well aware that her attempts to pair with Hollande to pop up out of the venture, in which the EU drew the Americans failed, and so just to close the Ukrainian history will not work and the losses from the war in Ukraine, the EU will have to fully share with Russia. It is unlikely that Merkel was counting on a breakthrough, the results of the talks with Putin, as Ukraine war-the positions of the parties has long been identified (in fact, in the autumn of 2014 after the Milan conference) and since then almost has not changed.Nothing really new, Merkel himself did not bring, so no results there. On the Syrian war, the Germans have nothing more to offer, as they’re essentially a minor player. Therefore, for the Assad singular points of contact to be expected, as a maximum, a certain mediating role of Germany in future negotiations.

Therefore, from the point of view of relations with the West, not the talks in Merkel, with whom, in principle, everything is clear and it is expected that negotiations with trump, who announced at the beginning of July. While that communication is in the telephone format without any breakthrough. Real negotiations major players in the Syrian and Ukrainian conflict, potentially promises much more than talks in Merkel, leverage on which these conflicts are very limited. Trump with one hand, has many options for both conflict and relatively wide room for maneuver.On the other hand, the US have not suggested any practical desire to depart from the requirements associated with Assad, the Crimea and Donbas. Here the key point will be the position of the White House administration before the real negotiations with the Kremlin.If she will be still to be mired in allegations of ties with Russia, trump simply does not remain other exit, except how to continue a prior course, or even to aggravate, then the window of opportunity will be closed permanently and we are waiting for the uncontested continuation of the Cold war with a substantial prospect of its escalation and the emergence of new theater (in the Caucasus or Central Asia).

Russia following talks with Erdogan and Merkel at least to clarify the relationship with trump in the summer of 2017, will adhere to the inertial strategy in Ukraine, supporting LDNR and in an attempt to reduce the intensity of the fighting on their territory.At the same time, it will seek to implement its advantage in Syria, including through further transactions with Erdogan, where from an operational point of view to 2017-th year, we are planning further expansion Assad-controlled territories, and strategic – there are developments aimed at starting a process of real political settlement with the retraction of the part of large players. Not sure that this will work out, but as a working scheme, the format of Astana itself is quite promising.

a) Russia is likely to continue to increase the military potential on the Western borders in response to the increased military presence of NATO in Eastern Europe.

C) In the Caucasus, Russia will seek to stabilize the situation in Karabakh and to prevent war between Azerbaijan and Armenia

d) In Central Asia, Russia will seek to maintain the status quo and ensuring border security of Tajikistan and Afghanistan

e) In Afghanistan, Russia now has a number of interesting variants, including a highly ambitious, in case relations with the US will continue to deteriorate

From the point of view of strategic goals in the Cold war with the USA, negotiations with Erdogan and Merkel are of secondary importance, as neither erdoğan nor Merkel are unable at this stage to help resolve the fundamental disagreements between Washington and Moscow. So expect real negotiations with the United States, where it will be the final clarification of the relations, after which it will become clear what direction the conflict will develop. As shown by the visit Tillerson, empty threat to the Kremlin is not impressive and tasteless gingerbread cookies from the White House, there to take not going. In this respect, the US will have to decide – either trump really starts in practice to depart from the course Obama, or we are waiting for further escalation, where the unrestrained desire of the US to maintain its hegemony by force, will push the world to war.