The full text of the agreement on security zones in Syria.

Islamic Republic of Iran, Russian Federation and the Republic of Turkey as the country-guarantor of the cessation of hostilities (CBD) in the Syrian Arab Republic (hereinafter – the Guarantor):

in accordance with the provisions of the resolution of the UN Security Council No. 2254 (2015);

Reaffirming commitment to the sovereignty, independence, unity and territorial integrity of the Syrian Arab Republic;

expressing the desire to reduce the level of military confrontation and to ensure security of civilians in the Syrian Arab Republic,
have agreed as follows.

In an early end to the violence, improving the humanitarian situation and create favourable conditions for promoting a political settlement of the conflict in the Syrian Arab Republic will be created the following zone de-escalation:

The creation of zones of de-escalation and security strips is a temporary measure, the duration of which is 6 months with automatic renewal on the basis of consensus Guarantors.

The boundaries of the zones of de-escalation:

stop the fighting between the conflicting parties (the SAR Government and the armed opposition groups which have joined or will join CBD), including the use of any weapons, including air strikes;

the conditions for providing the population with medical assistance and meet the basic needs of citizens;

taking measures to restore the infrastructure, primarily water and energy;
the conditions for safe, voluntary return of refugees and internally displaced persons.

3. To prevent incidents and clashes between the conflicting sides along the boundaries of zones created de-escalate the security strip.

checkpoints – to ensure the smooth movement of civilians without weapons, the delivery of humanitarian assistance and the promotion of economic activities;
observation posts – to ensure compliance with CBD.

5. The guarantors undertake to take all necessary measures to ensure compliance with the warring parties CBD; to take all necessary measures to continue the fight against ISIL, “Dzhabhat EN Nusra” and all other persons, groups, enterprises and organizations associated with “al-Qaeda” or Islamic state and other terrorist groups that are recognized as such, the Security Council of the United Nations both insideand outside areas of de-escalation; to continue efforts to join CBD units of the armed opposition, which has so far not joined CBD.

6. To determine the boundaries of the zones of de-escalation and security strips, as well as address other operational and technical questions of implementation of this Memorandum the Guarantors within two weeks after its signing will create a Joint working group on de-escalation (further – the Joint working group), consisting of authorized representatives.

The guarantors will take steps to complete the preparation of maps of areas of de-escalation and security strips until 4 June 2017, and also dissociation of the units of the armed opposition from terrorist groups specified in paragraph 5 of the Memorandum.

The joint working group shall report the results of its activities in International meetings on Syria in Astana.

This Memorandum shall enter into force on the day following the signing.

Signed in Astana on may 4, 2017, in three copies each in English language, all texts being equally authentic.

PS. Important detail, the agreement allows to conduct combat operations in the “security zones” in that case, if military operations conducted against militants. where this agreement does not apply. So for a full cessation of hostilities in Northern Hama, and in several areas of Idlib, I would not count the cost, “al-Nusra”, “Jund al-Aqsa” or the “Noureddine al-Zinki” obviously does not stop the war. So once again, the parties noted the commitment to the territorial integrity of Syria in defiance of the Kurdish autonomist aspiration of the heated States.

By June it should be clear how the parties will be able to advance in the implementation of the stated provisions that are somewhat more specific than the agreement Lavrov and Kerry in February 2016, which led to the first deal the US and Russia. It should also be noted that Moscow and Washington have declared readiness to renew contacts to implement the Memorandum of flights to Syria, which was suspended after the strike, the U.S. air force at the air base. Subsequent events showed that this performance was designed primarily for China, and the continuation has not followed, and the provocation in Khan Sheyhun not only led to a decrease in the intensity of airstrikes in Northern Hama, but rather the opposite – after hitting the Sirat, the intensity of attacks by militants in El-Latinskom the ledge has grown significantly.

Regarding the questions – and do not use the rebels once the truce to compensate for the losses and prepare for future battles? Of course use. It will be so.

The question is – how to use the duration of the transaction for successful operations against the Caliphate and al-Nusra with an eye on the need to prepare to conduct heavy fighting in East ghouta, Northern Hama, Deraa and other areas. If the duration of the truce, the SAA will be able to increment areas and cause a number of sensitive defeats to the Caliphate and al-Nusra, the transaction itself will justify everything. The main thing is to monitor the activity of the militants and their sponsors, not to missed the time of return of hostilities in the intensive phase.In other respects, the situation for the Syrian theater is not new, periodically changing the focus of the strategic operations (including forced), has long been an integral part of the local war, where sides of the conflict more than two. Hence the complex nature of political-military operations that fully prochustvovat all the key parties to the conflict. The performance of this transaction, it would be appropriate to assess than the current map of the Syrian front with the state in which they reside at the time of its probable completion.

This deal has officially supported the UN in Damascus and even in Washington with Riyadh.

Formally all over. But it is believed that just will not work.

And of course, do not confuse this deal with the end of the war – the war with the Caliphate and “An-Nusra” does not stop. 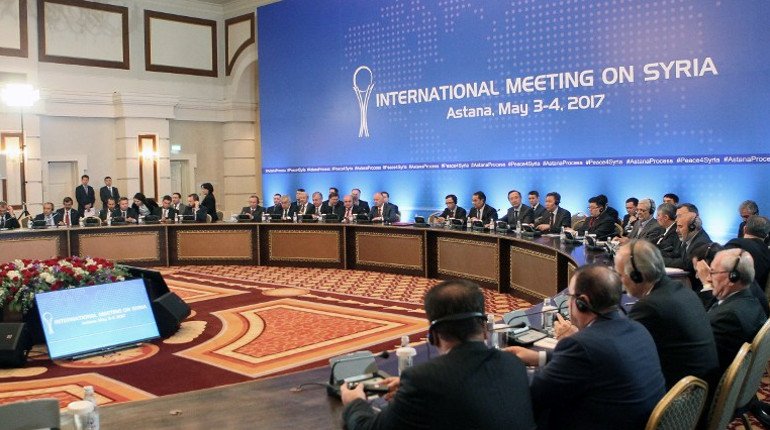 In Astana signed a deal on Syria. Now, instead of bilateral agreements Russia and the USA, which resulted in two transactions in 2016 (successful and unsuccessful February September), split three ways.  Instead of the United States from fighters made Turkey + added Iran.

Delegations from Russia, Iran and Turkey signed a document on the establishment of four safety zones in Syria on the line of contact between government and opposition forces. Border areas and other technical issues must be resolved by may 22

Until the end of may in Syria will be established four security zones in areas of contact between the governmental forces and armed opposition groups. Inside zones will be forbidden the use of weapons and secured the work of humanitarian organizations. The perimeter zones will be established safe areas to prevent clashes. To this agreement on Thursday, may 4, came the Syrian conflict during the fourth round of talks in Astana.The consultations were attended by representatives of the official Damascus and the armed opposition, as well as delegations from Russia, Iran and Turkey — the countries — guarantors of the agreement, reports “RIA Novosti”.
According to the adopted in Astana a Memorandum on the territory of Syria created four broad “life raft”. From North to South is the area in Idlib province, to the North of the city of HOMS, Eastern ghouta (suburb of Damascus) and in the South of the country, near the city of Dar. In other parts of the country, where different forces are fighting with militants of the “Islamic state” (banned in Russia as a terrorist organization) of the zone will not be created.

Schedule of further diplomatic action follows. Within five days (by may 9) the guarantor countries will establish a working group at the level of commissioners to determine the boundaries of zones of security and technical issues. This work should be completed by 22 may, i.e. in about two weeks. The next round of talks will be held in Astana in mid-July. It tripartite working group will have to report on the progress of the peace settlement. According to Deputy Minister of foreign Affairs of Iran Hossein Ansari, the implementation of the Memorandum will take about a month.

PS. The decrease in the intensity of the fighting in these areas suggests that in may and June, the SAA and its allies have deployed large-scale offensive in East HOMS, West of raqqa, and likely we will see a blow to deblokady Deir-ez-Zor.But all this will be possible only if Turkey will be able to guarantee the cease-fire by militants, moreover, it is worth remembering that in the same Idlib, al-Nusra and Co. obviously the truce will not comply (especially since the coalition led by the “An-Nusra” in conflict with a coalition of “Ahrar al-sham” oriented to Turkey), so that the ceasefire in Idlib, I would not expect. But in Latakia, Bostanai Huta and Deraa quite possibly fighting will decline, unless of course Saudi Arabia and Qatar do not want to contribute to this combination of adjustments, pumped arms and funds the militants that they are against the background of attempts to establish a truce, launched an offensive in Contraire or Deraa. Plus, do not forget that the United States under this deal actually left out of the negotiation process, together with the Kurds. For good, they need to connect, but there is no certainty that Washington will, zainteresovan to play along with Russia and Iran in their Turkish combination.

Syria earlier already spoke positively about the deal with the security zones, apparently hoping that the summer campaign will allow Damascus to significantly expand the controlled territory in Central Syria. Regarding medium-term prospects of this transaction, I would bet that it will be implemented partially, and the parties will have basic benefits, improving its position in the Syrian war. A full settlement under this political scheme, I would not count, as it does not take into account the interests of the United States, the Kurds and the Gulf monarchies, without which, the war will continue, albeit in a somewhat modified form.