The story of the bombing of Kurdish bases in Syria and Iraq the Turkish air force continues to acquire new details.
USA after the attacks and complaints from the Kurds, expressed concern and said that with its actions Turkey is stopping the coalition to fight ISIS. It was also stated that Turkey had not received approval from the coalition for strikes on Kurds https://tvzvezda.ru/news/vstrane_i_mire/content/201704252109-7dp2.htm. The most interesting that later made Erdogan and said that the Americans and to put it mildly disingenuous about the impending air strikes on the Kurds has been announced in USA and Russia. This puts US exactly in the same ambiguous position, and most recently Russia with the Sirat. In contrast to Erdogan, the U.S. does not consider YPG terrorists and systematically cooperate with them, particularly manifested in the course of operations in the area of Raqqa and Tabqa. Later, the Pentagon officially said http://peyamakurd.com/tr/2017/04/25/pentagondan-aciklama-geldi-saldiridan-haberimiz/ that the warning was received and called for “respect the territorial integrity of Iraq.” About Syria, the Pentagon ambiguous silence. 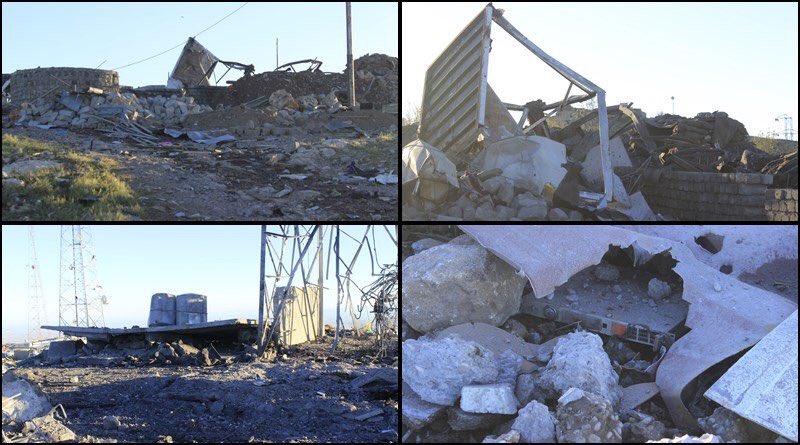 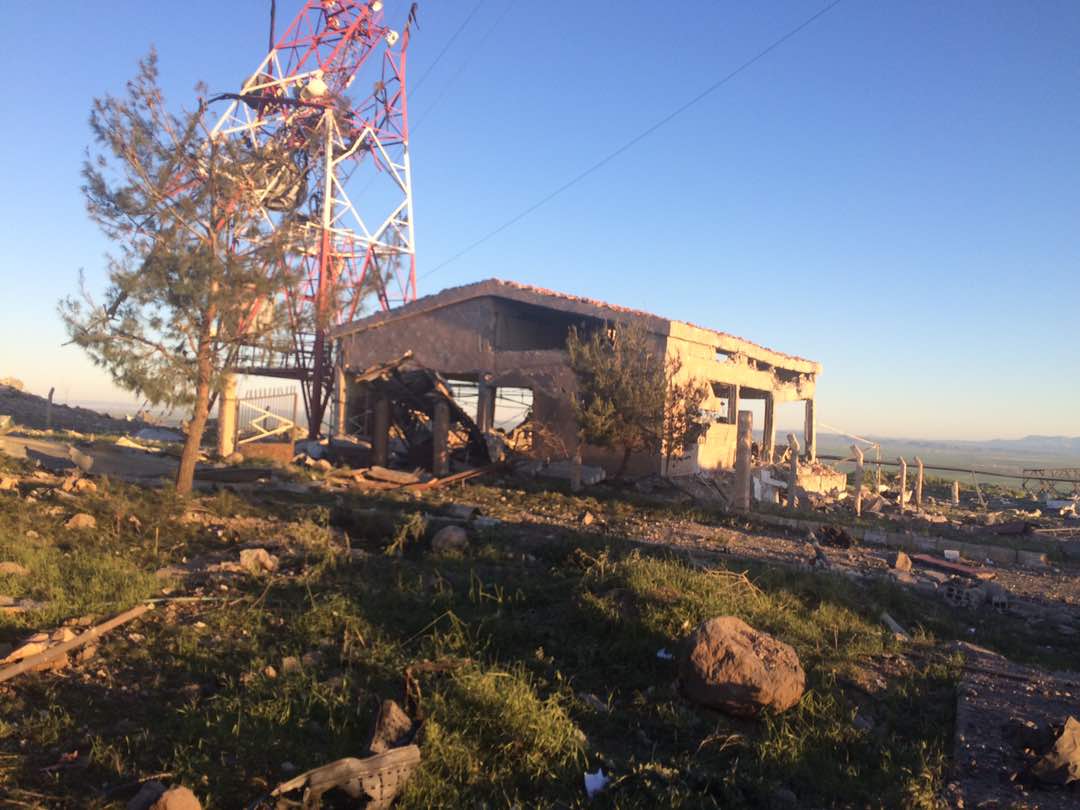 But unlike Russia, which warned Assad about the impending strike on the Sirat, Washington, for whatever reasons, did not warn the Kurds (unless of course you believe Erdogan) considered unnecessary (did not or didn’t want), and that led to large losses of the Kurds (70 killed by the Turks, about 40 killed and wounded according to the Kurds). In place of the bumps popped up immediately forces SOF. Urgent show the flag in the Turks bombed areas was designed to appease the Kurds, who naturally began to ask questions “What for?”, since last year, the United States is hinted to Assad, he bombed where in combat formations YPG conduct of the American military. And then it turns out that Erdogan is notified in advance of the United States, bombed the Kurdish camp and the US pretended that nothing did not know about it or worse, knew but didn’t. Especially the Kurds enraged by the fact that the air strikes had destroyed a memorial to victims of the fight against ISIS in honor of the Kurdish fighters who gave their lives in the fight against the Caliphate. 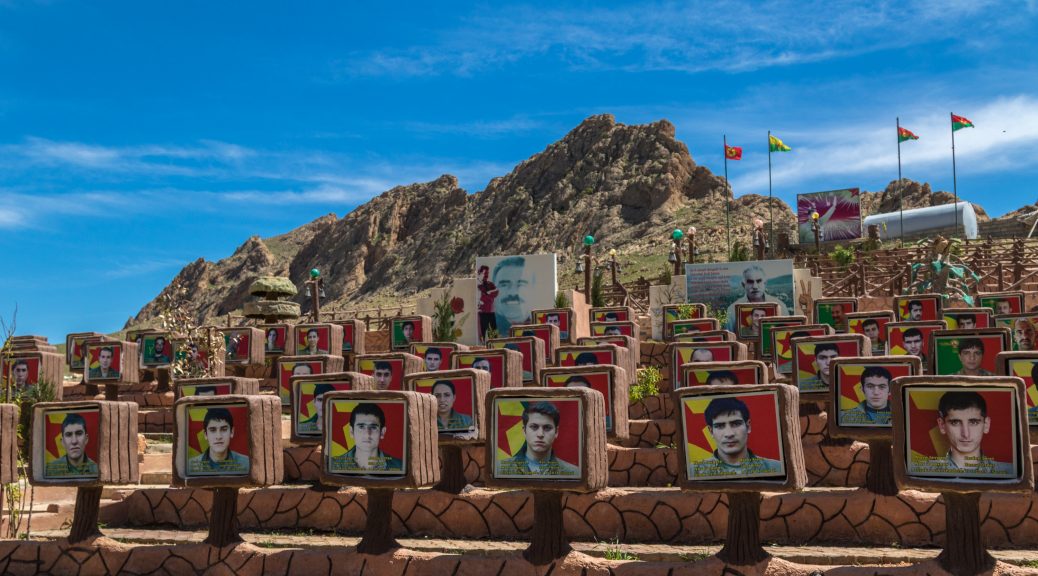 On the site of the memorial formed a huge funnel that leads one to suspect that the Turks purposefully bombed.

In the province of Rojava were mass protests against the “terrorist Erdogan”. 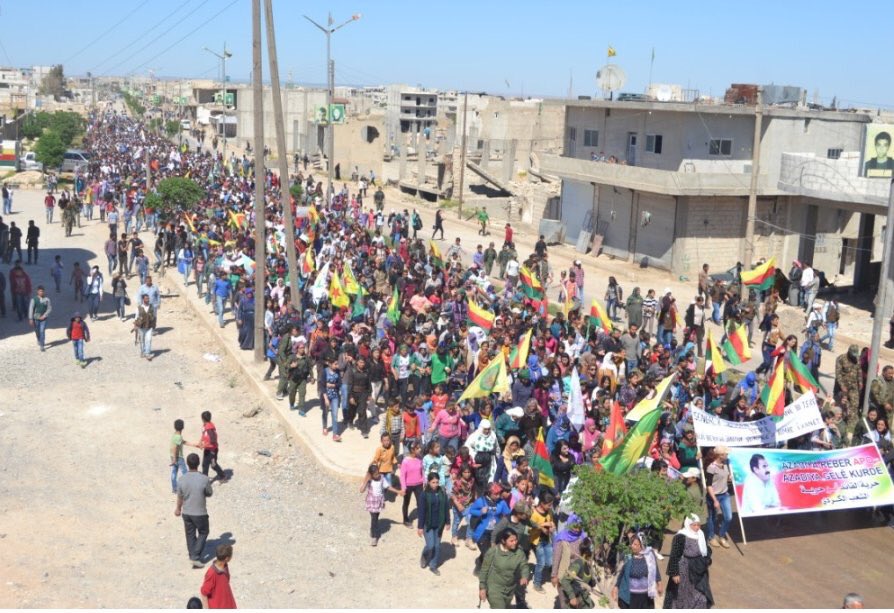 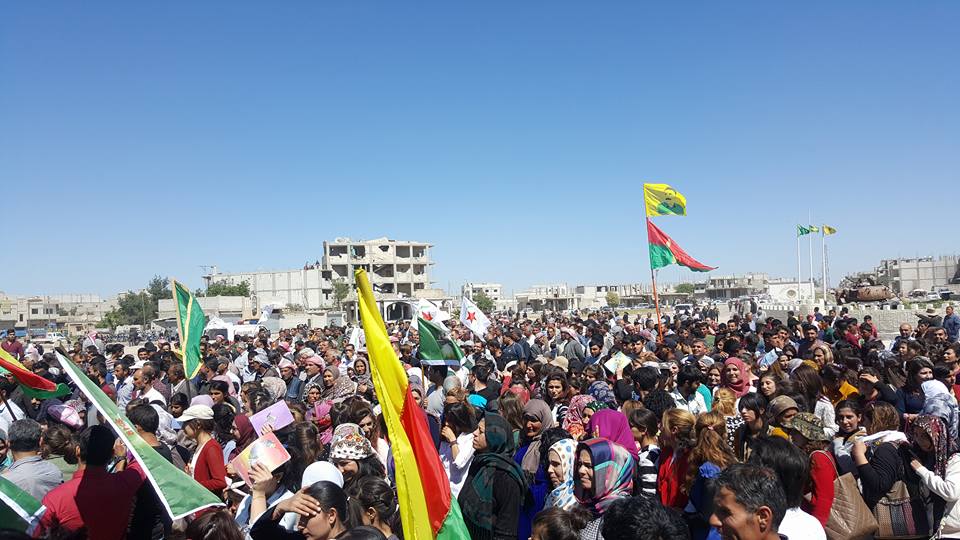 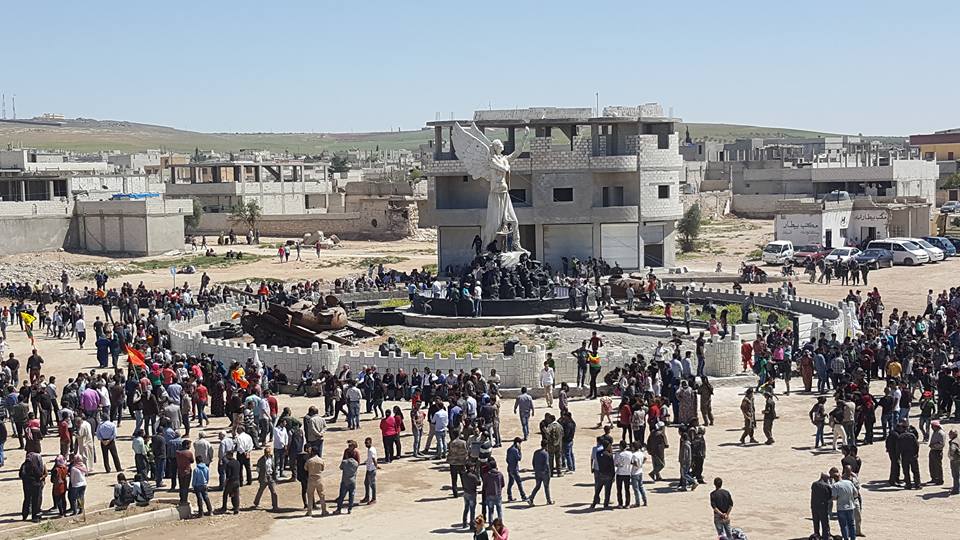 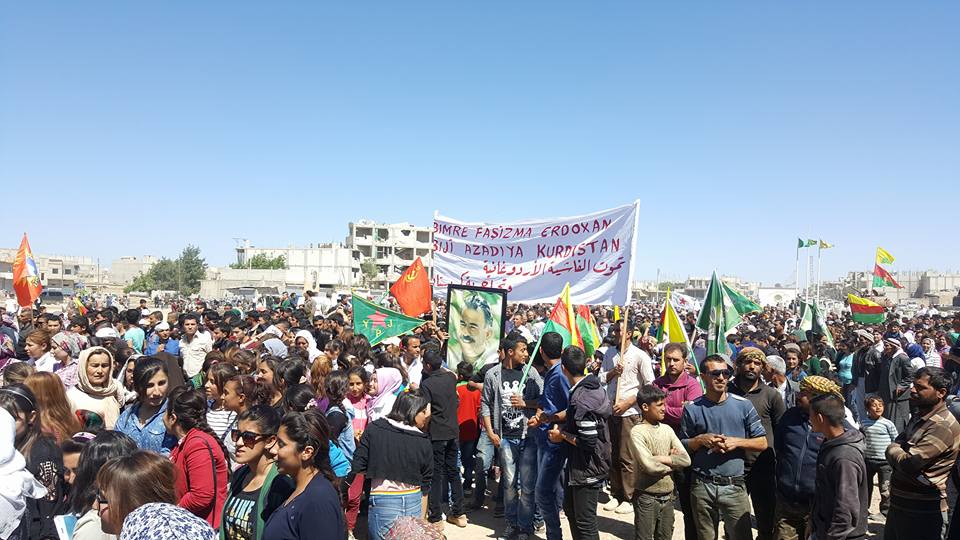 Protested not only in Rojava. Here’s an example of the meeting in Dortmund. 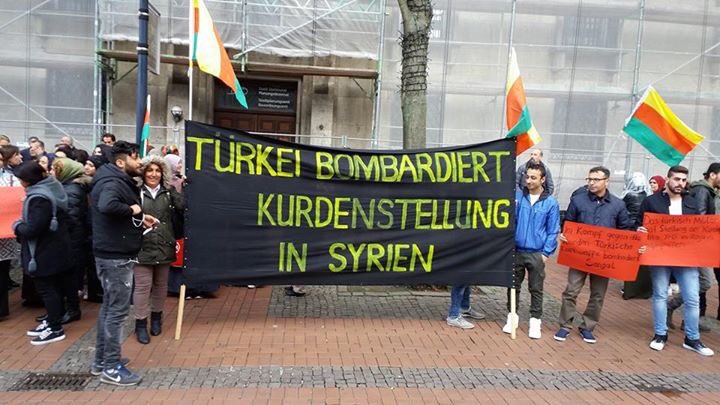 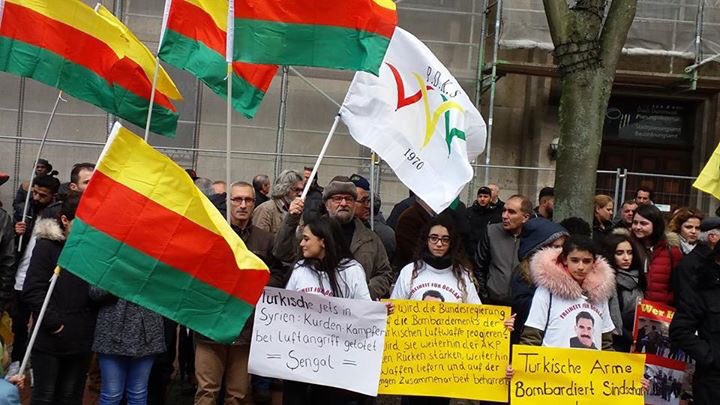 The Americans are now trying to extinguish the conflict, as fighting between Kurds and Turks, may hinder the implementation of the plans associated with preparing a direct assault on Raqqa. Through a network of military bases deployed South of Kobani and Qamishli, the U.S. continues to drive to Raqqa various military and civil engineering machinery (like SOF and 75th regiment of the Rangers, and for SDF/YPG), but the previously announced time frame of the assault of Raqqa already obviously moved because of the profound losses in the fighting on the southern Bank of the Euphrates, and the lack of heavy equipment, as well as the protracted siege of Tabqa. In this respect, the demonstrative impact of Erdogan to Kurds fell to the Americans very not the way the US is now in terms of information are doing the same, what did Russia after the attack on the Sirat, to treat negative informational consequences. 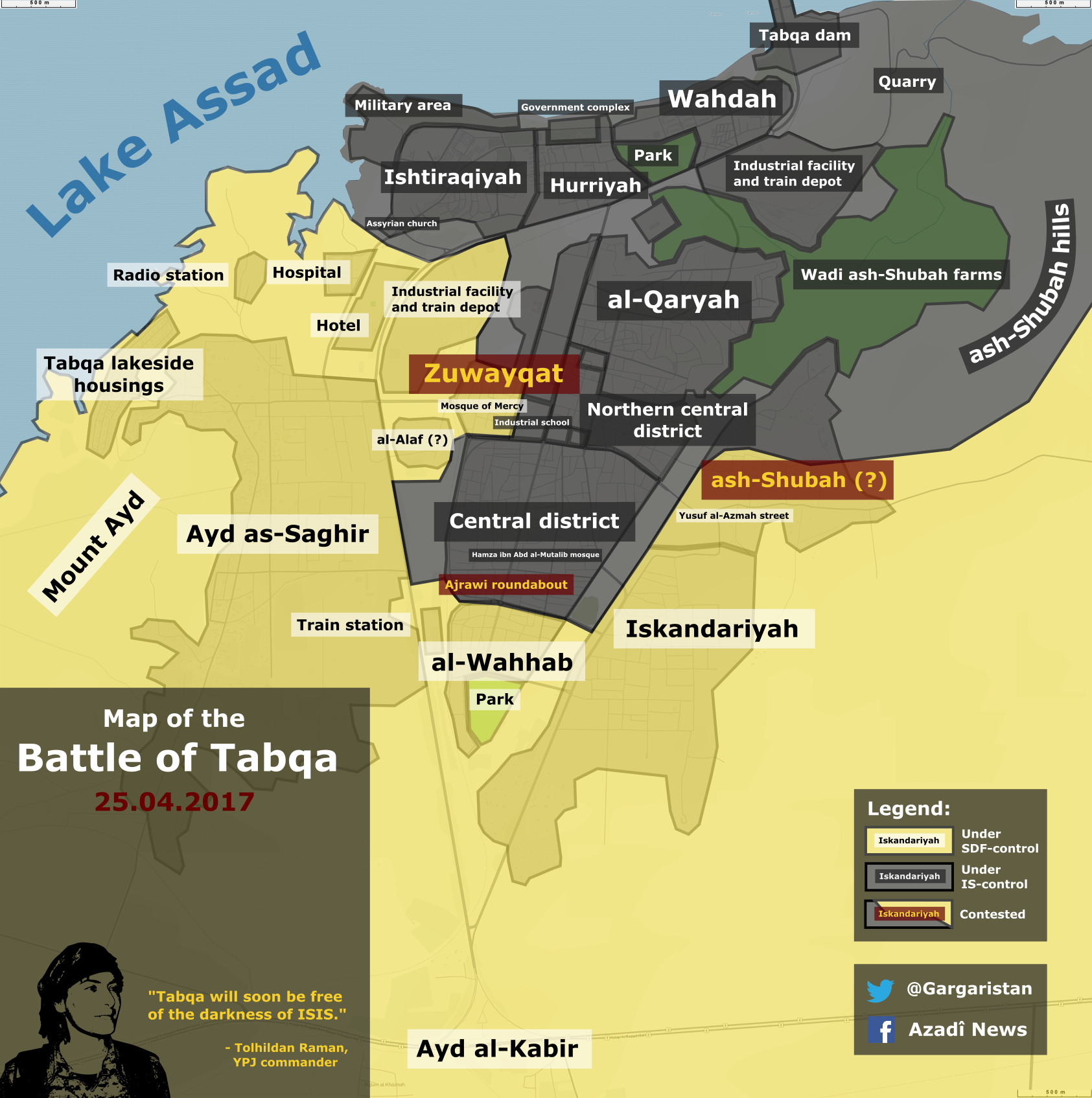 Erdogan himself of course believes in his own right, as the Kurds terrorists for him, all the major players, he warned, so guilty he does not consider himself. Moreover, hitting the American clients, he again started the old song about the need to remove Assad. Thus, Erdogan is trying to show that he wants to do in Syria, an independent policy, flirting with the Russian-Iranian and American coalitions, but the case, he can always throw out any trick.For Russian-Iranian coalition, a blow to the Kurds is unlikely to represent a serious problem, but for Americans it was a very unpleasant surprise. 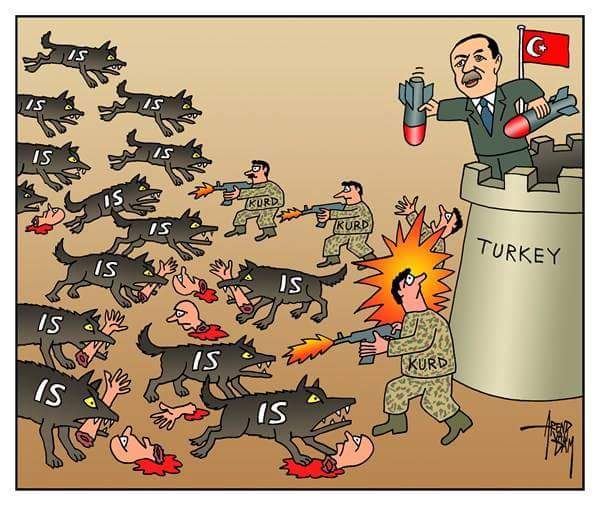 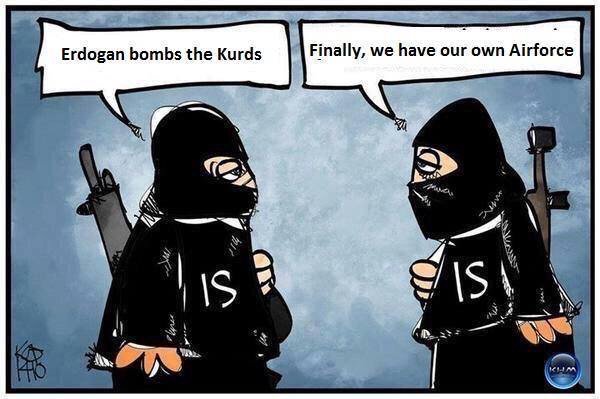 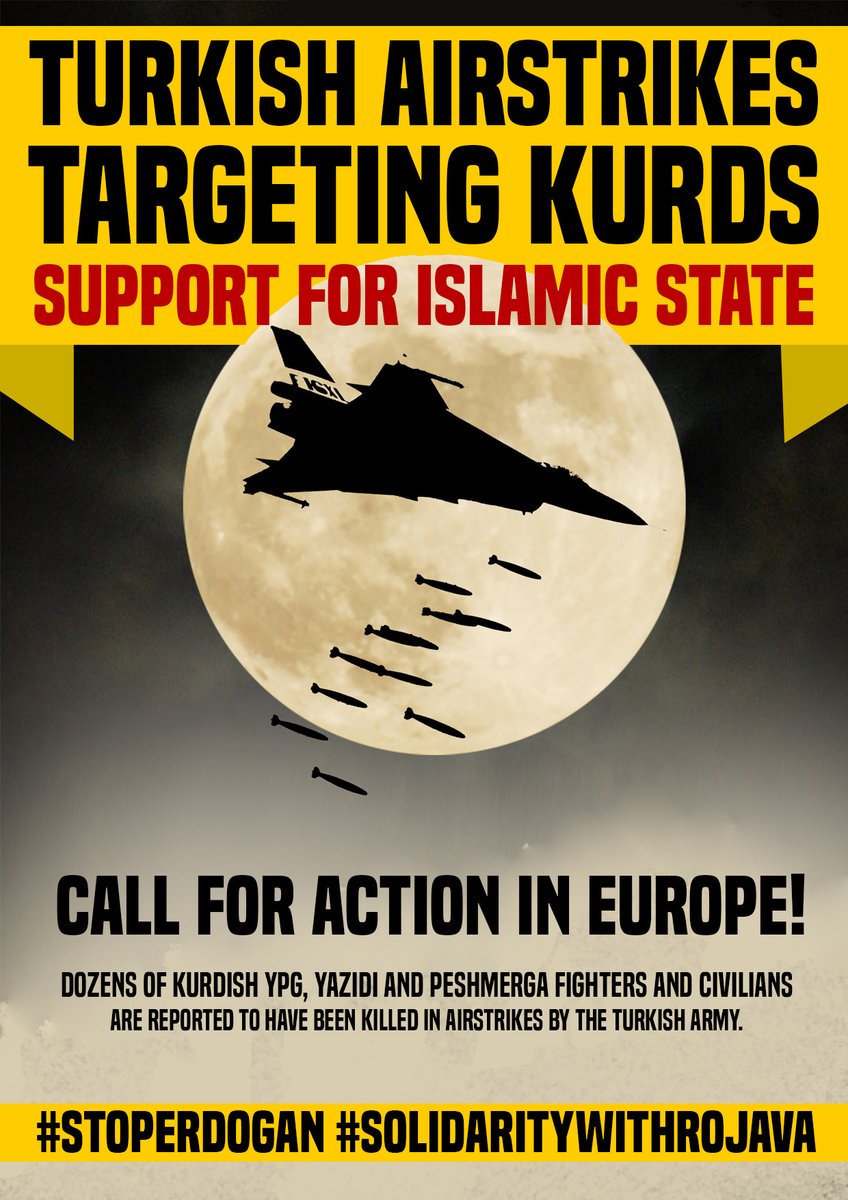 I believe that the United States military and diplomatic channels, try to explain to the Turks that no need to do so, and at the international level will be limited to performances in the spirit of Lavrov, where he will Express “regret and concern about Erdogan’s”, as it is clear that to shoot down planes the Turks for Kurds, States are unlikely to attack one NATO member to another would have seemed an oxymoron. The Kurds, I think, will also find how to calm , starting for example often open to show the American flag in different districts in the provinces of raqqa and Hasaka, that the Turks chose targets more carefully, and not bombed where Erdogan or the Turkish General staff wants. Or tossing the Kurds Rozhava new batch of weapons under the guarantees that it will not fall of the PKK (and if there is a desire secretly to annoy Erdogan, without guarantees). The Kurds in revenge, you can answer a series of terrorist attacks in Turkey, for example in the same Diyarbekir.

But indeed, it’s a tactical action and dealing with the consequences of the Kurdish-Turkish conflict continues to fester and diplomatic measures it can only be dimmed, but not allow – at the first opportunity the parties are following the path of escalation. The Americans in this case tend to sit on two chairs – on the one hand they do not want to break all the pots with Turkey (as it was Obama) is not giving Erdogan, Gulen, and on the other hand make full use of the Kurdish infantry for the implementation of the plans of the Pentagon in Northern Syria. Erdogan, in this case “came back” and tried to pull one of the chairs, but the Americans have long been teetering in this position, so that the simple killing dozens of Kurds and destruction of the memorial is too small to have something fundamentally change in this matter. 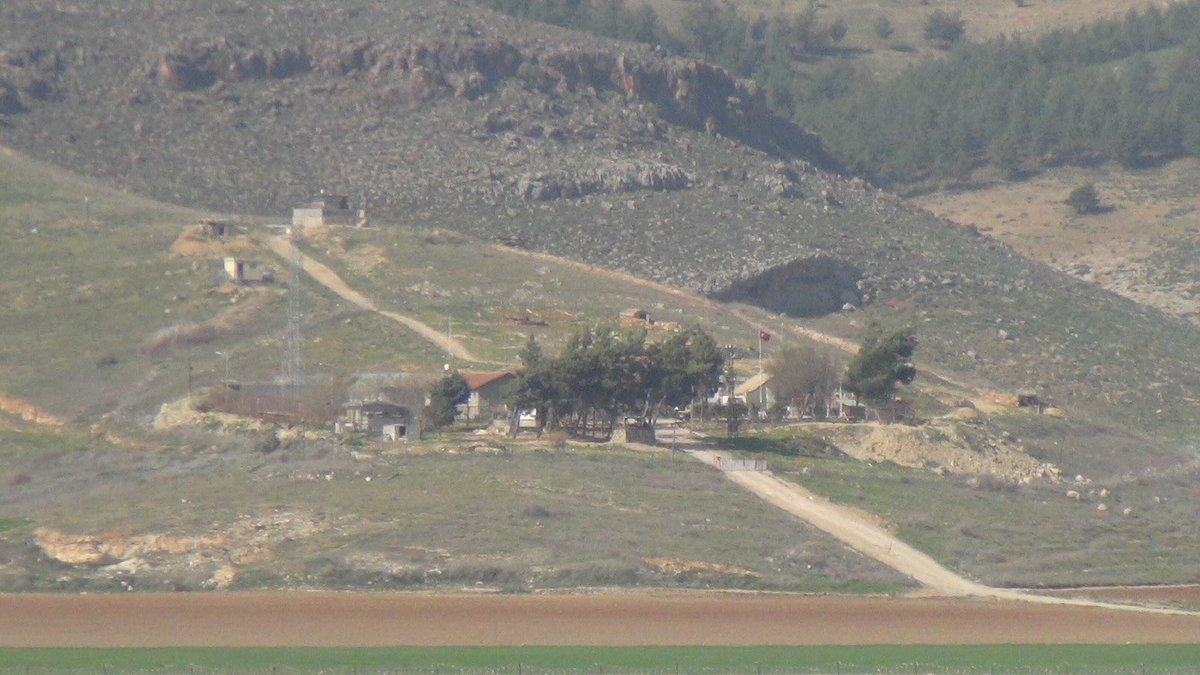 Turkish base on the borders of the Canton of Afrin. 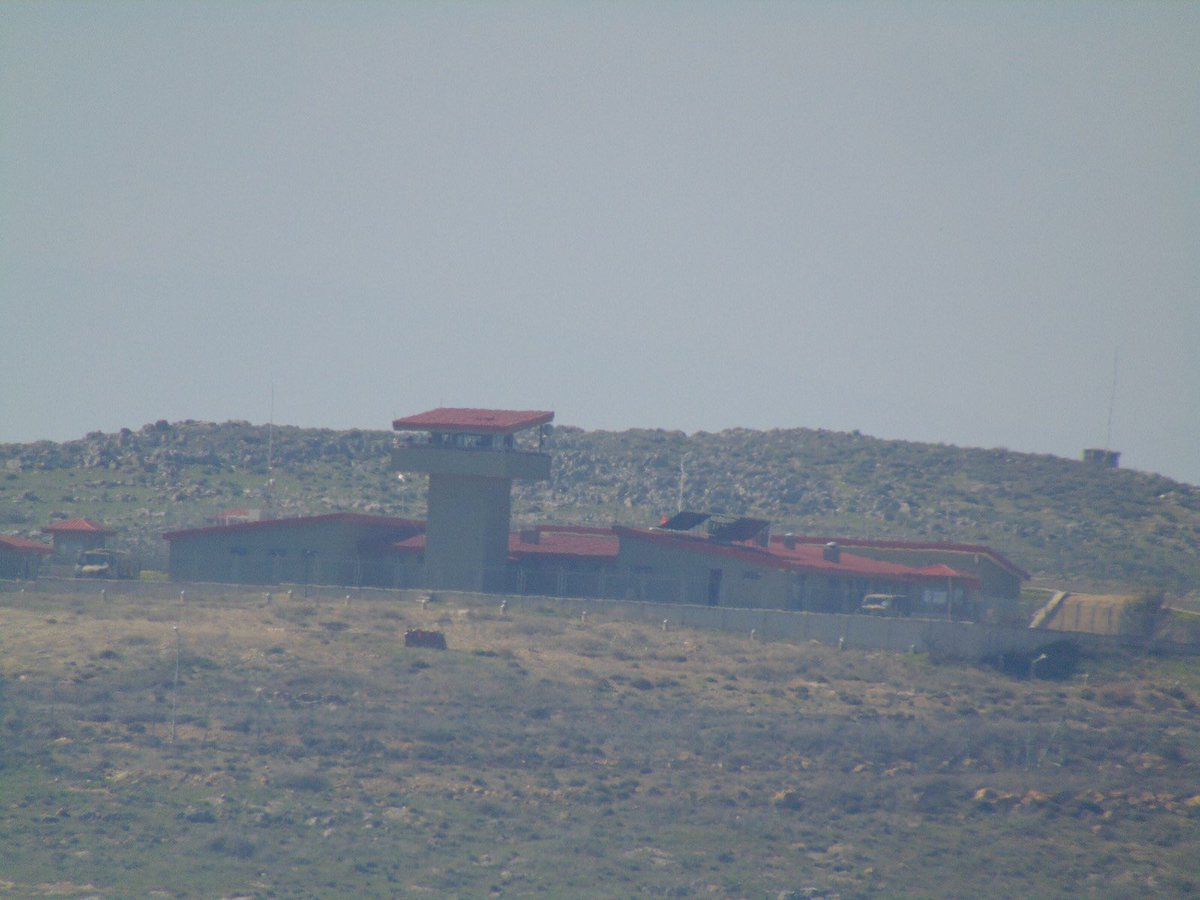 The Turks, in turn, can moderately to listen to the Americans, but holding the anti-Kurdish policy, they certainly will not stop. The strengthening of the border with Rozhava and the suppression of the supply channels of the PKK will continue, will increase the Turkish forces on the borders of the Canton of Afrin, are not excluded provocations with the use of PAS against tal Rifat and Manjib. Hints in this direction have already been made through the PAS https://www.almasdarnews.com/article/free-syrian-army-leader-says-will-fight-syrian-army-kurdish-ypg-rural aleppo/ however judging by the fact that the front North of Aleppo stands amid raging battles in Northern Hama, with its obligations Erdogan does.

But the main moral of this story – with Erdogan need to keep an eye on, so you do not receive such shocks in the back. Russia burned in this in 2015, now came the Americans.

PS. On the title pictures, the visit of us special forces https://twitter.com/ericasangsuwan/status/857017455855755266 in the area attacked by Turkish aircraft near derrick.

American Representatives Came To Visit The #YPG Base From #Rojava Hit By Turkish Airstrike & Situated On Mount Qara Shouk Near #Derek Town pic.twitter.com/AdPdSuImWr

A crowd chants "Erdogan is terrorist" while the US troops visit the area bombarded by Turkish airstrikes near Derik, #Rojava. pic.twitter.com/ZUjtLKYgYX

One response to “A stab in the back | Colonel Cassad”