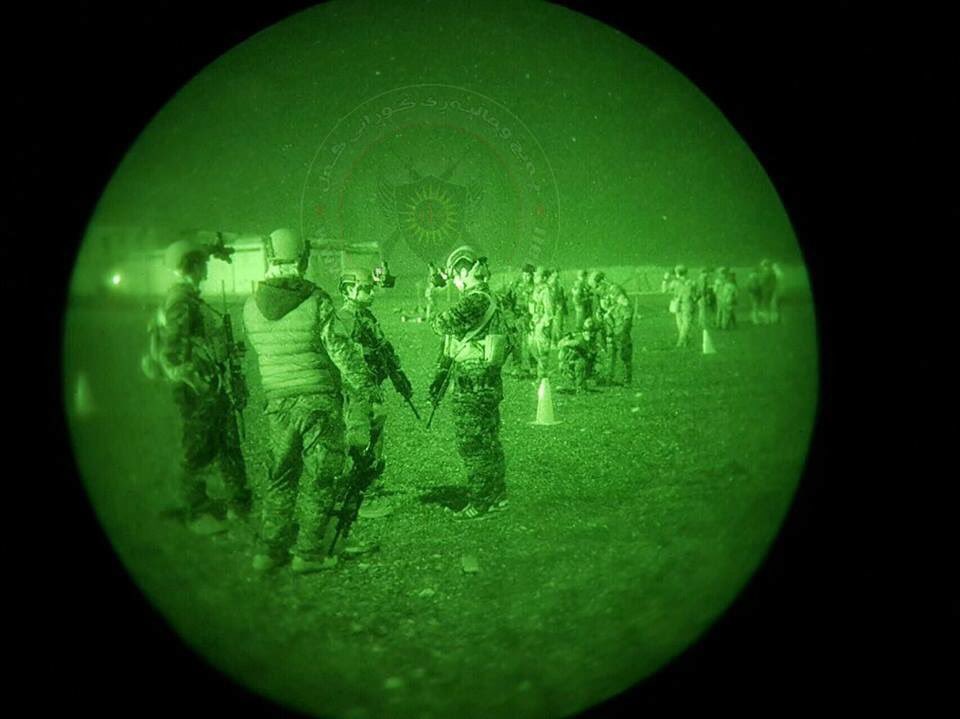 Interesting stuff about training of the US army to combined arms operations.

The US army is preparing for a harsh reality: the struggle with Russian and Chinese weapons

Despite the fact that the prospect of large-scale mechanized land war between the US and Russia or China may seem unlikely, before the U.S. army is tasked to be ready for any scenario ground fighting. Explained the situation to the army commanders, saying that current and future military situation in the world becoming more modernized, and Russia and China continue to supply arms.

Russian tanks T-72 and T-90, Chinese drones, fighters and missiles are now part of almost every army in the world, each of which may be in conflict with the United States. Pakistan, in particular, armed with tanks Chinese type 85-IIAP, and Iran —the Russian T-72. Even such small countries like Bangladesh have in their Arsenal of tanks made in China, and many others, such as Cuba, India and Libya —Russian. North Korea has both, which is not surprising.

The highest official of the army officials also explained that, if American ground troops will be in Syria, they will face weapons of Russian production. It will happen or not is unknown, but the prospect is a real threat from the point of view of analysts and managers of the teachings of the U.S. army. “If the army will launch a ground war in the middle East, we will resist the arms of Russia, Iran, and in some cases, and China,” — said a senior representative of the army in an interview with Scout Warrior.

The change of direction of the combat training of the army

Army live-fire exercises include large-scale military scenarios in which mechanized forces face a series of improvised, and also equal to the power of the enemy or enemy weapons using new technologies, drones, tanks, artillery, missiles and armored vehicles. US army extends scope of military training and the emphasis on combat arms in order to resume the ability to fight against numerous enemy forces and leave behind all those 15 years that were spent on test practice combat against dismounted infantry, and insurgent forces.A recent ground wars in Iraq and Afghanistan have been experienced and tested in combat troops, the ability to track, attack and destroy the small enemy groups — often hiding among the civilian population, using trucks for the movement and hiding on the ground and in ambushes.

“Now the army has a lot of experience, but the breadth of this question we are obviously lacking. We’re having the counterinsurgency operations that require the security of large areas. Today, we are likely to have to focus on the operations of “motorized maneuvers” over longer distances,” — said in an interview with Scout, Warrior, Deputy chief of staff Directorate for doctrine and training of the personnel Ricky Smith. Against the background of attempts of high-ranking military officials to emphasize the importance of counter-insurgency and development plans for a wide range of conflict scenarios, there is a clear shift towards readiness to wage a successful struggle with such large and technologically sophisticated opponents like Russia or China.

The U.S. army is, of course, does not consider these countries enemies, no special training to deal with them and not seeking to join a war with them. However, given the current volatile threat environment, which includes existing tensions and rivalries with the aforementioned great powers, preparing the U.S. army has increasingly focused on preparedness for a bilateral mechanized combat.
At the same time, although large-scale mechanized war is fundamentally different from counter-insurgency, in several key aspects there are potential similarities between recent wars and possible future conflict of the great powers. The ground war in Iraq and Afghanistan lasting over a decade, became a sort of baptism of fire for various types of precision-guided offensive weapons such as artillery with guided by the signal of global navigation satellite systems and missile assets.

Weapons such as  driven active-reactive projectile (ARS) Excalibur, is able to accurately hit enemy targets at a distance of over 30 kilometers, giving the commander of ground operations an opportunity to identify places of concentration of enemy fighters, buildings and areas for the manufacture of bombs.As another example, the reactive system of volley fire GLMRS — high precision guided missile of distant radius of action, capable of hitting targets at a distance of 70 kilometers and, in addition, successfully used for the destruction of the Taliban in Afghanistan.

These types of high-precision weapons shells, first used in Iraq and Afghanistan, has largely contributed to the efforts of the land forces in the midst of a major ground operations. They could be used to destroy key targets behind enemy lines such as food warehouses, formation and combat vehicles of the enemy.

Another area of potential matches are drones. The war in Iraq and Afghanistan showed a real breakthrough in technology and use of drones. For example, at the beginning of the military operation “Iraqi freedom” the US army had only a few drones. Now it has thousands of trusted drones that can detect enemy positions, to track the impending ambush and save lives in battle. All these aspects would be equally useful in ground combat large scale.However, they will probably find another use, for example, in the field of new tactics, equipment and procedures in wars involving the great powers.

“It is not a return to the future and moving forward, where US forces will face well-trained and lethal opponent. This generation of commanders of military forces can simultaneously conduct combined arms fighting and ensure the safety of large areas,” said Smith.

However, many army leaders, familiar with the tactics of the counterinsurgency actions will have to review methods of conducting large-scale military action using conventional weapons.

“The current generation of leaders have to expand the training to carry out simultaneously military battles and to provide security in wide areas of operation,” said Smith.

“The army must be prepared for all aspects of military operations. One of them involves fighting against an equal force of the enemy, which in the past few didn’t happen,” Smith said.

As explained by senior army officers, a new approach to joint integrated training was called “Decisive action”. The live-fire exercises at the base in Fort Riley, Kansas give the possibility of implementing these new strategies, say military officials.

“I could every morning to put the battalion on the North and South side and just conduct combined arms battles. I could also hold fights in the style of “battalion to battalion,” which would include firing live ammunition,” said one high-ranking military officials. “Thanks to the available airspace and the use of unmanned aircraft systems I can set the distance from 0 to 18 000 ft and execute the maneuver of fire from concealed positions.”This includes the use of drones, aircraft, and army air force strike aircraft and armored vehicles, artillery, tanks and equipped with small arms of infantry squads, the official said.

Some of the main tactics and techniques that were developed during the exercise “Decisive action”, consists of exercises like “destroy object”, “to close with the enemy, synchronize firing from concealed positions” and “contact ninth line” (to tell the planes the coordinates of the target from the earth), stated the commanders of the army of the United States. Military developers have explained that the exercises with use of military weapons aimed, inter alia, the implementation of a wide range of new technologies that will help better anticipate the tactics, weapons and systems, which may be engaged by the enemy. They imply the use of more unmanned aerial vehicles and systems, and in the future massive attacks of mini-drones, as well as new computational technologies, the tactics of tank battles, the war with the use of electronic means of enemy aircraft and precision weapons, including anti-tank missiles, self-guided artillery and missile systems.

In order to implement this approach to the fighting, the US army is preparing for a new maneuver forces in combined arms combat. Similar combat capabilities aimed at synchronization of a wide range of weapons, technologies and military means in order to mislead and destroy the enemy. Smith compared the combined arms fight with a Symphony orchestra where every instrument needs to integrate harmoniously into the overall sound.

From the point of view of hostilities that would mean the combined use of battle “tank on tank”, firing from concealed firing positions or self-propelled artillery, air defense, air force, network technologies, drones, rockets, missiles and mortars that would create a unified effect that are able to provide dominance in the battle space, explained Smith.

For example, aircraft and artillery could be used to attack enemy tanks or armored vehicles, to allow your tank units and combat vehicles of infantry to regroup for the attack. The idea of a joint offensive is to use air Apache attack helicopters and drones, and artillery range, together with Abrams tanks and infantry combat vehicles.

Smith explained that the preparation for possible future threats also includes full logistics and the ability to conduct prolonged fighting, making food, ammunition and other necessities will be to strengthen the military economic activities. The current basic training “Decisive action”, with an increased emphasis on “expeditionary” capabilities, in which the army is ready for battle today by a quick relocation over long distances with support weapons, infantry, armored vehicles and other combat vehicles.

At the same time, this strategy relies to some extent on the ability to use the technological advantages in the conduct of combined arms combat, and a system of links and precision weapons that can destroy the enemy from far distances. In order to implement these methods in the training program, using military weapons, military instructors said that in military exercises “battalion on battalion,” the practice “approach the enemy” at distances of over 620 miles. “This generates a forwarding thinking,” he explained.

PS. About the collision of the US army with Russian and Chinese weapons, the author slows down a bit – the us military already experienced this during the ongoing war in Syria and Iraq. For example, one of the strike drone in Anbar province, was hit by a Chinese MANPADS FN-6. The same fighters used during the battle for Raqqa and Manbij ATRA “cornet” in Russia captured from the Syrian army. And about the passage of a ground operation in Syria a little amused – she actually is (title photo, part of the SOF in the area of Raqqa).

In other respects, the growth of the military-political tension and the intensification of global competition has highlighted the need to enhance the readiness of the armed forces to conduct large-scale offensive operations against the armies of the industrial and post-industrial type. These changes are clearly visible as the United States and Russia. The parties are slowly adapting to the new normal, the war in Syria, Iraq and Ukraine, are the source of experience that is being implemented gradually in the course of actual military construction.