After the use of the whip, associated with a series of bellicose statements and threats addressed to Russia, after arrival to Moscow Tillerson, followed by gingerbread.

1. Moscow has been promised a strategic partnership, if it will hand over al-Assad.

Press Secretary of us President Donald trump Sean Spicer said that the US is open to strategic partnership with Russia. “We are open to strategic cooperation with Russia, in which we can achieve common goals such as the defeat of the “Islamic state””* — said Spicer. (Terrorist organization “Islamic state” is prohibited in Russia). White house spokesman said the United States will defend its interests and values. As stated by Spicer, Russia is isolating itself by collaborating with such failed regimes like the Syrian.

Failure mode fails here for 6 years and still can not fails. But failed almost everyone who said “Assad must go”.

2. Russia is now included in a new edition of the “axis of evil”, from which it can easily get out if refuses to cooperate with a “failed” regimes of Syria, Iran and North Korea.

“The only countries that do not support the US position is Syria, North Korea, Iran and Russia. All of them are failed States, with the exception of Russia. It’s not the best time to have a cocktail party with these countries”, — told reporters Spicer, commenting on US actions in Syria.

Then, obviously the Americans are lying, as not only the above countries do not support the actions of the US.

3. The network has leaked the conversation which took the place of during a meeting G-7, where Tillerson made disparaging comments about Ukraine.

U.S. Secretary of state Rex Tillerson at the meeting of foreign Ministers of the countries “Big seven” (G7) in the Italian Lucca asked his European colleagues to explain why Americans should care about the conflict in Ukraine. This was stated by Minister of foreign Affairs of France Jean-Marc Ayrault, reports Reuters. According to Ayrault, Tillerson openly wondered why “American taxpayers” should be interested in the situation in Ukraine.

Sanctions of G-7 also will not enter. In Kiev, a tense, well as Washington will sell Ukraine.

Actually, the United States before Tillerson’s visit to Moscow, the maximum pumped up to the extent of possibilities and skills of its negotiating position to avoid a situation in which the state Department came during the Kerry, when Moscow openly contemptuous of threats from Washington. This time, nobody in the US will not be able to say that the White House is acting from a position of weakness. Trump managed to wag your finger all opponents (even China), and Russia offer traditional gingerbread, if she suddenly decides to go the way of putting their own interests and to return to the “blessed times” of Gorbachev, Shevardnadze, Yeltsin and Kozyrev.

In fact, Russia would gently suggest how to get rid of the Alliance with Iran, to stop supporting Assad, do not interfere to deal with the DPRK, and in exchange promise not to include in the list of “failed States” abstract “strategic partnership” (in the style of promises to Gorbachev), and even, in the form of a hint, the possibility of settlement in Ukraine. The carrot in this sense seems clearly overdue and tasteless. Alternatively, the White House threatens “isolation” that the Kremlin will hardly scare, as the previous “isolation” named Obama ended what is known.

However, the second most popular is the theory that all is nothing more than a shake of the muscles and the picture for the masses.

The Russian foreign Ministry said in General that do not consider the threats of the Americans an ultimatum – say, the usual rhetoric.

PS. The Western press is now openly mocks Britain, which by the hands of his foreign Minister, Boris Johnson demonstrated the absence of any subjectivity, Recalling the days when Tony Blair was regularly depicted in the role of manual dog of George Bush. 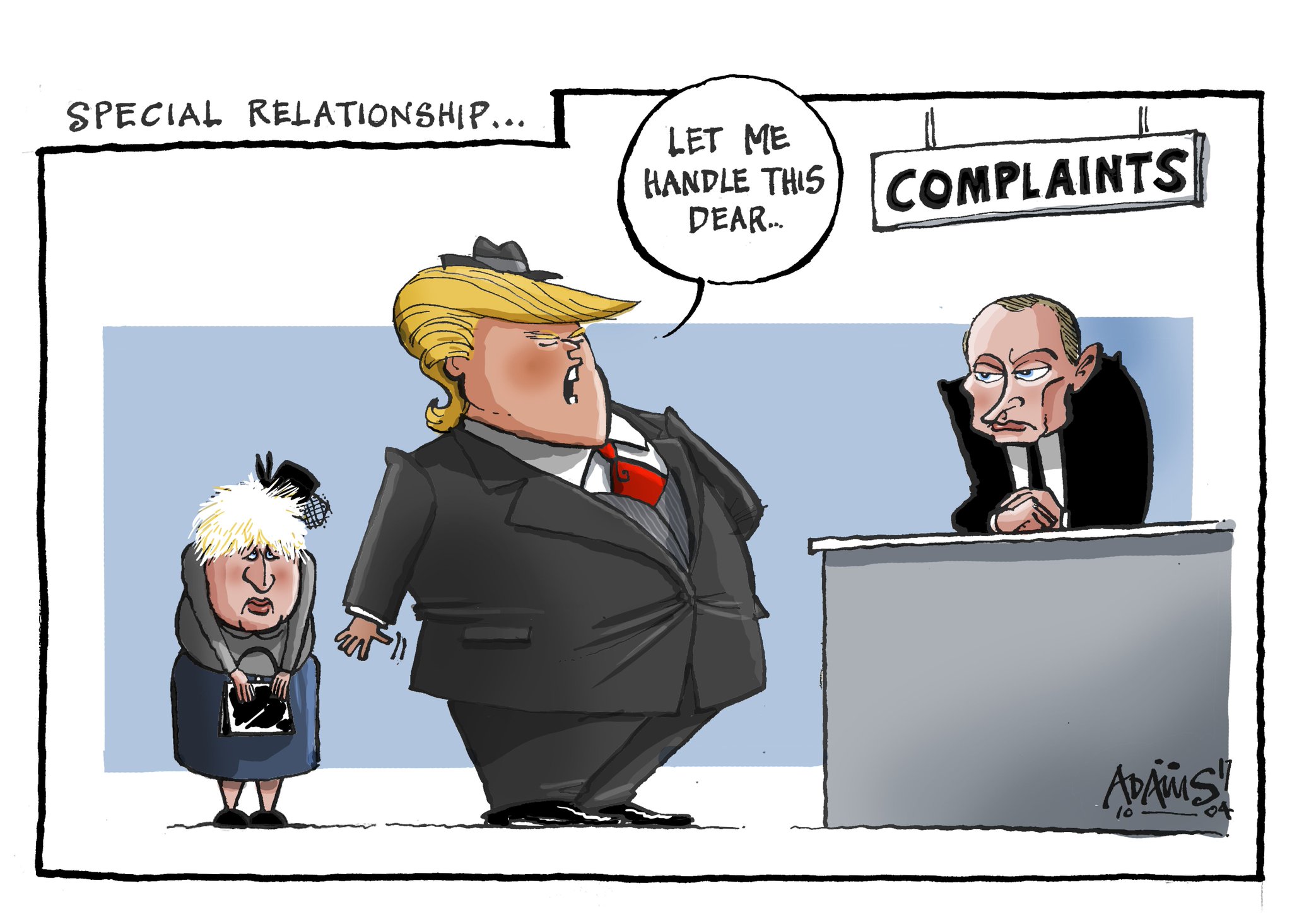 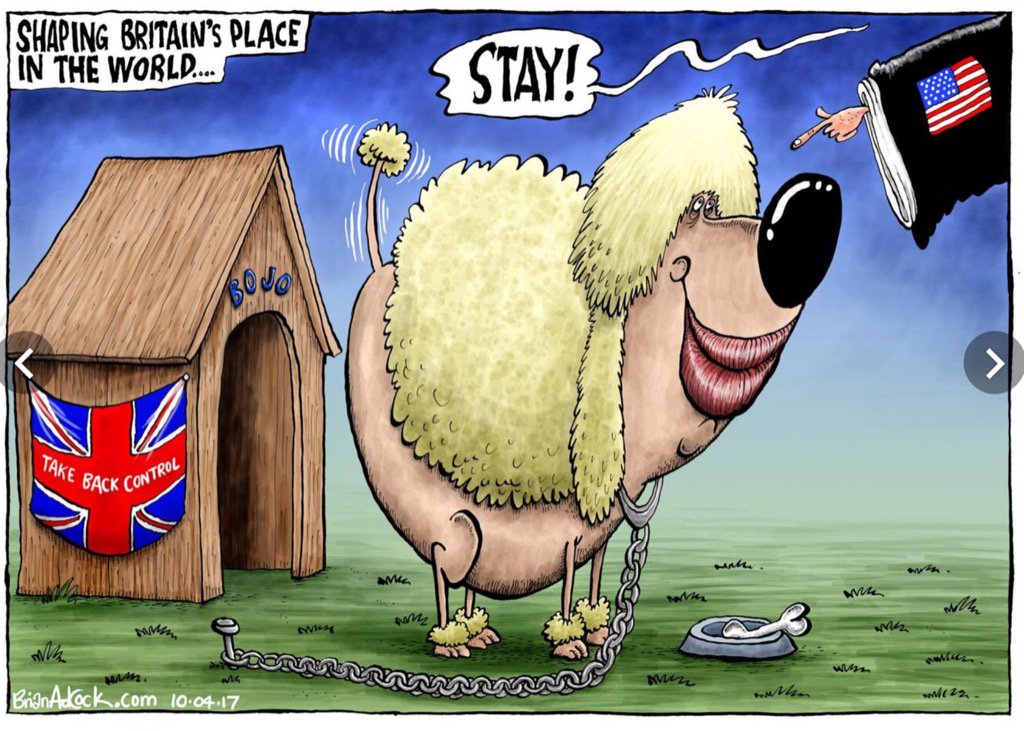 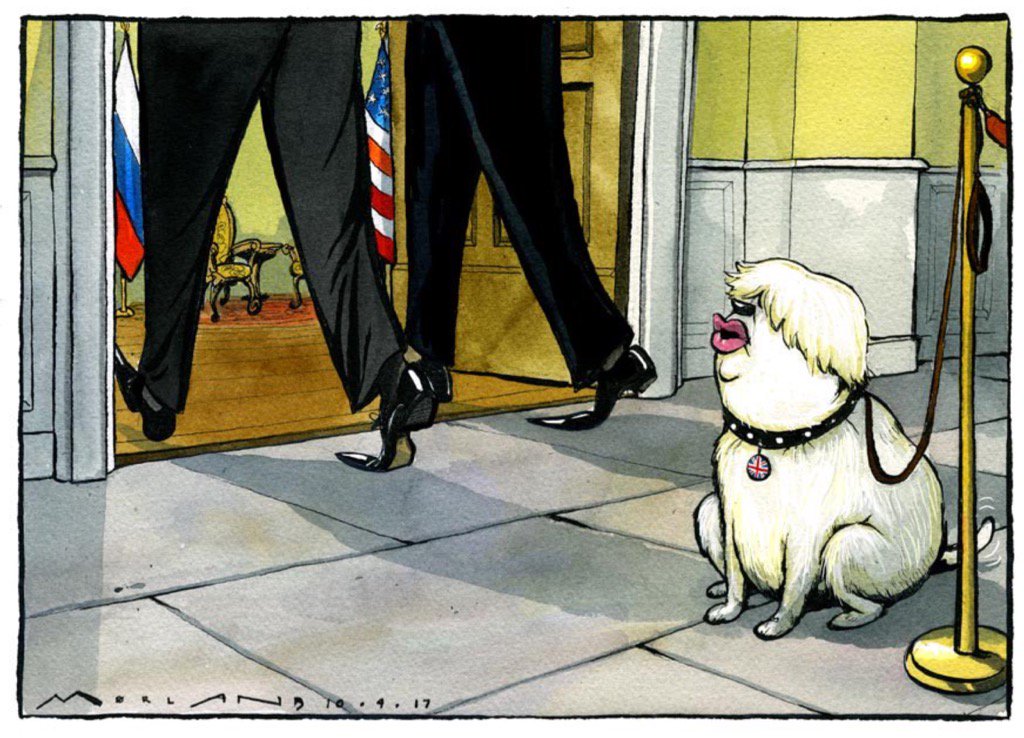 This is especially good place “established state” in the modern world.