Of defense DNI said that militants of the “Azov” took the Donetsk Filter Station, which plays an important role in water supply of Donetsk.

During yesterday, the parties accused each other of shelling the station, with the result that the local staff supporting its operation has been discontinued. 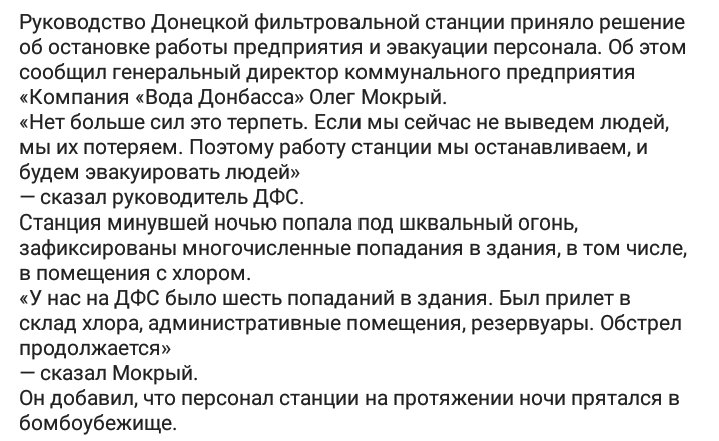 This has resulted in decreased water supply in Avdiivka and Donetsk, as the station supplies the settlements on both sides of the front line. A similar conflict was observed from Lugansk thermal power plant, which in the fall of 2014 have undermined the fighters of “Aydar”, which led to power outages in the LC and in the occupied territories. In this case, it is possible to observe the fighting near the station are at risk of normal water supply as the territory of the DNI and the occupied territories of the APU. 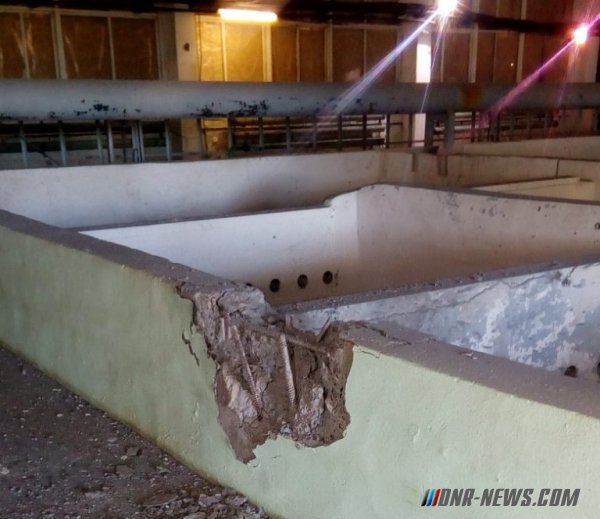 Pictures of all hits in the station do not give a clear answer to the question, where exactly were arrivals at the station. Repair work on the DFS has still not begun because the SCCC cannot guarantee the safety of repair crews due to the ongoing fighting. Also on the verge of a shutdown is once again Avdiivka coke plant, the village after a night of shelling in part without light. By lunchtime, according to the headquarters ATO Avdeevka remained completely disconnected.The next intensification of the fighting in the Donetsk direction occurred soon after his arrival, the situation in Donetsk for a meeting with Ukrainian more and statements in Parliament that she allegedly visited the Ukrainian part of the front and campaigned for them to turn their weapons against Poroshenko.

The station itself was in fact in a grey area and today claims the DNR, it was occupied by fighters of “Azov”.

National battalions began to plunder the Donetsk filter station, said the Life source in the security office of the DNI.

— Yesterday at five in the morning Ukrainian security forces shelled the station with artillery, creating the preconditions to humanitarian and environmental disaster, says the source. — Tonight, using the fact that the workers evacuated, natsbaty started marodernichat on its territory and to fire from industrial buildings to the station on our positions.
According to him, the soldiers of the national battalions have used heavy machine guns and mortars.

Donetsk filtering station located in neutral territory of the contact line in the Donbas – a kilometer from Yasinovataya and 12 kilometers from Donetsk. It provides water not only for Donetsk, but a number of large settlements on both sides of the line of contact, including Avdeevka.

Donetsk filtering station captured by militants of the national battalions, said Deputy commander of the operational command, Ministry of defence DND Eduard Bacurin. According to him, after yesterday’s announcement of the ex-commander of the regiment “Azov” Biletsky they are completely out of control of the Ukrainian President and unleash a new round of hostilities in the Donbass.

— From that area the enemy used mortars and heavy machine guns. The fire is carried out from the premises of the station, not only on our positions but also on residential areas of the settlement Yasinovataya and Spartak. Knowing that our units adhere to the Minsk agreements and not open fire on the objects of life, the enemy feels the full impunity, — said Eduard Basurin.

— It can be concluded that the Ukrainian authorities are currently not in control and cannot ensure the security of citizens of Ukraine, — he added.

Here the situation is really simple – if APU or punitive battalions entrenched on the station (actually assistiv a standard promotion in a “grey zone” in the spirit of classes Novoluganskogo), she will in a relatively short time will be irreparably destroyed in the ongoing fighting, which will create long-term problems for water supply of Donetsk and Avdeevka. The station continued to work in the “gray area” because of the existence of secret agreements that were broken (never such was and here again), after the junta moved its position to the DFS, which immediately created problems for the water supply of Donetsk and Avdeevka.

Perhaps the sponsors of “carbon blockade” of Donbass, who read out an ultimatum to Poroshenko via Biletsky from the rostrum of the Verkhovna Rada, want to force a humanitarian crisis and further escalation of hostilities. Probably the station I will try to release with the help of the OSCE and JCCC, as attempts by the military to bring back the old status quo with the big share of probability will lead to its destruction and consequently Donetsk can expect a water crisis in the spirit that in December and January experienced a Damascus, when militants in Wadi Barada deliberately violated vodosnabzhenie capital of Syria.

This story reminds us once again of the inability of the Minsk agreements to stop the war and to freeze the conflict in the Donbas. In the event of serious shortages of water in Donetsk will be extremely difficult to tell people about the “lack of alternatives”. 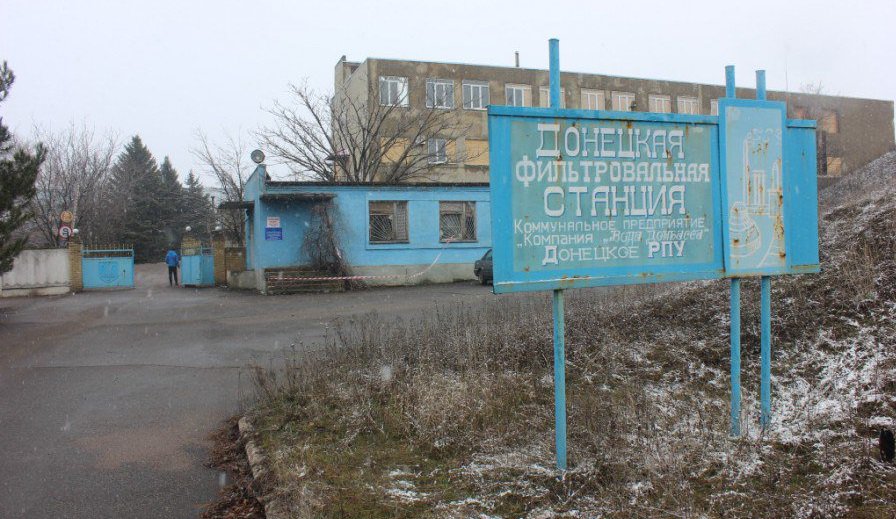 In continuation of yesterday’s story http://colonelcassad.livejournal.com/3267029.html around DFS.

1. The negotiations on the withdrawal of Ukrainian troops from DFS this morning to no avail https://news.rambler.ru/video/36184392-ukraina-sorvala-peregovory-po-donetskoy-filtrovalnoy-stantsii/, which gave rise to the Donetsk re-tighten dull mantra about “violation of the Minsk agreements”. However, for lunch they had come to an agreement about the withdrawal of Ukrainian troops from most of the DFS http://rusvesna.su/news/1488105606 while the junta still did not miss the opportunity for a few to advance their positions in the “gray area” to the DFS, which again led to the reading dull mantras about “violation of the Minsk agreements”. The junta, in turn, traditionally broken Comedy on the theme of “we never fired at civilians of Donbass” and do not know who is now on the territory of the DFS.

2. The station is currently stopped http://hunternews.ru/?p=28680since, due to the ongoing hostilities, to carry out repairs it is difficult, that keeps the threat to the water supply of Donetsk and Avdeevka.

The OSCE conducted a review of DFS https://news.mail.ru/incident/28892817/?social=tw, finding that the station was under fire from 82-mm mortars (without indication of who was shooting), which led to 4 hits on the building of the DFS. According to the OSCE, the station suffered serious damage.

3. At this stage, the OSCE and JCCC continuing consultations on the establishment of the ceasefire in the area of DFS, in order to get there you had to run a repair team from Donetsk. For dinner, the question was not agreed upon. Yet, as in the case of the problem of heat supply of the Town, I believe that there will be achieved a compromise and DFS will remain in the “grey zone”, and it will be made repairs.If the APU will abut repairing it or will provoke the activation of intense fighting in the district DFS, in this case Donetsk and Avdeevka will have water shortages.

Overall, against the background of the Syrian swing, with mass occupations of towns and villages, and progress of troops for tens of kilometers, the dismantling of the gray zone in the area of DFS and the ongoing endless monotonous attacks http://mediarepost.ru/online-novorossiya/77586-online-lenta-novorossii-svodka-za-26022017-post-obnovlyaetsya.html of course much inferior in scale, being another part of the local trench warfare. But on the other hand, for all this tyagomotina Minsk hides enormous stress and suffering of people who are forced to fight and to live without clear guidelines and timelines to be followed by a qualitative change in the current stalemate.