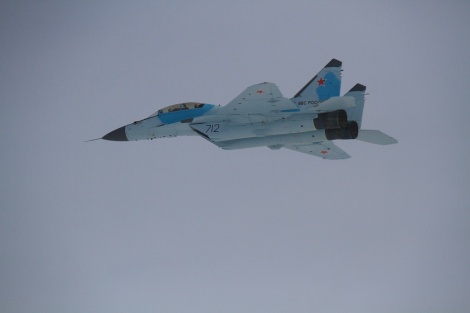 26 January 2017 the President of Russia Vladimir Putin during the videoconference with JSC “RAC “MiG” was shown produced in Lukhovitsy near Moscow “the first demonstration flight of” one of the prototypes of the MiG-35, built on the Industrial site No. 1 of JSC “RAC “MiG” (JSC “United aircraft Corporation”) in Lukhovitsy in two experimental (“pre-production”) of samples for contract to conduct the respective ROC with the Russian space forces. In the show featured twin aircraft, designated MiG-35УБ (tail number “712 blue”).

speech at the video conference:

Vladimir Putin First of all I want to congratulate you all on an important event – the beginning of flight testing our new light fighter MiG-35. Of course, I congratulate the designers, engineers, workers, pilots – all those who participated and continues to participate in this serious and important work, put on the new wing of the car.

I note that the latest multi-purpose fighter MiG-35 has improved performance characteristics, equipped with the most modern weapons, you know me better than that, willing and able to accompany from 10 to 30 goals, works not only on land but also by sea. This is a really interesting, unique machine, you can say “4++” is close to the fifth generation.

Very much hope that our army will be significantly strengthened by this machine – our air force, the Military space forces. But this aircraft has good export potential, mean that in more than 30 countries have actively operated the other machine – the MiG-29, and infrastructure in these countries to use this fighter has trained staff.But, of course, and the industry, and everything to do with the operation of these machines, everything must be ready in order to offer our potential partners the most necessary in the modern world services for the maintenance of this equipment.

There is another point to which I wish to draw attention, it is that one of the companies “MiG” plans to release a commercial aircraft, which is very in demand in the economy, in great demand by our people, I mean the medium-haul turboprop aircraft for use on domestic civil lines.

I very much hope that this work, especially since the decision we have made about the funding sources will be done in time and we will see an upgraded machine, which will be widely used and be used on domestic routes.

Please listen to your report.

Reports to the head of the United aircraft Corporation Yuri Slusar. Next to me is the General designer of the Corporation [UAC] Sergey Sergeyevich Korotkov and chief pilot Corporation “MiG” Mikhail Belyaev.

High, which has a plane, achieved through the first use of an installed on-Board defense system, new optical-location station. Minimized radar signature, we have increased from six to eight the number of suspension points, allowing you to use current, and future samples of air weapons, including laser weapons.

The aircraft has extended range, more than 50 percent, due to the greater capacity of the internal tanks and the functions of refueling, which in particular may be carried out in the mode of the tanker aircraft of the same family.

All systems of the MiG-35 is a Russian development and production, including new used systems: inertial system and helmet-mounted target designation system.

The plane is planned in the draft state armament programme, purchasing serial – 2019. Tomorrow here in Lukhovitsy, we will present to our potential buyers from other States this car. I really hope that it will be successfully implemented on foreign markets, already note an increased interest in this car. I hope that in this sense, of course, those orders that we receive through the Ministry of defence and on military-technical cooperation, to provide loading of the plant.

But, as You have noted, here in Lukhovitsy, based on production site of Corporation “MiG” in parallel, we are launching preparations for the production of regional turboprop aircraft Il-114. The decisions made at the meeting You six months ago, began to be implemented, resources allocated, and communicated to the Corporation. Parallel lines design Bureau is preparing documentation to transfer to the plant, and here, in the same shop, which will be the production of the MiG-35, in parallel, we are reaching the pace – at least 12 aircraft Il-114 in the year.

Yury Slyusar: would Like to give the floor to the pilot, for the first time lifted the car into the air, Mikhail Belyaev.

In the framework of the program of tests on the MiG-35УБ (double version) the crew of the Russian aircraft Corporation “MiG” test pilots Mikhail Belyayev and Stanislav Gorbunov – made flight to demonstrate the characteristics of stability, controllability and maneuverability.

During the flight objectives and the results achieved fully. All onboard systems were working normally. The power plant, a complex aircraft control system worked normally. A qualitative assessment of crew – positive. Quantification is obtained by processing and analysis of materials received by the records control and recording equipment. The report is finished.

We managed to create a multispectral system, which was integrated into the weapon, dostavlena on Board the MiG-35, and along with other systems we have created complex, which belongs to a generation “4++”. I hope that the Ministry of defence after the test will buy this car and foreign customers come to us to sign contracts. I would wish this project to succeed.

Vladimir Putin: Thank You very much.

Please pass on my most heartfelt and sincere congratulations to all the large team that worked on this product on this machine.

Review bmpd. According to the known information, both experimental (“pre-production”) of the sample MiG-35 was built in Lukhovitsy to November 2016, with the first built single MiG-35 (tail number “702 blue”) made its first flight there on 24 November 2016, and double MiG-35УБ (tail number “712 blue”) – about the 1st of December. It was assumed that both aircraft in December, will be presented to Vladimir Putin during his expected visit to Zhukovsky, but the visit was postponed and eventually took place, and the presentation of the MiG-35 to the President of Russia the result was produced by the leadership of the KLA and the RAC “MIG” in a videoconference on 26 January.

It is known that the State program of armaments for 2011-2020 was intended procurement for the air force (VKS) Russia 37 serial MiG-35 cost about 37 billion rubles. In the course of the adjustment Program in 2013 is planned the signing of the contract was postponed for 2016, but to date this contract has not been signed. Now announced the beginning of serial procurement of MiG-35 “2019”.

The videoconference, Vladimir Putin, JSC “RAC “MiG” on the occasion of the start of flight tests of aviation complex MiG-35, 26.01.2017 (C) kremlin.ru