The power structures of Iraq have now for 89 days (from October 17 of last year) conducted a large-scale operation called “We are coming, Nineveh!”. Resistance of the DAESH fighters was stronger than expected prior to the attack. The rule “was Smooth on paper, Yes forgot about the ravines, and on them – to go” to work, like everywhere else. A particularly nasty surprise was the massive use of suicide bombers in booby-trapped cars. By 1 December, government forces said about the destruction in operation 632 car bombs.If on the outskirts of the city, in an open area to fight the bombers were successfully used tanks and ATGM “Kornet” which struck a large part of the vehicles, before they had time to close, the city suddenly appeared from the adjacent small streets “car bombers” became a real nightmare for the soldiers of the advancing troops. It should be noted that against the Iraqi army and Peshmerga Caliphate had used more bombers than against SAA, CCA, the Turkish army and the SDF/YPG together. By early December the attacking forces began to fizzle out. In southeastern Mosul offensive ended on 9 December, following a painful defeat divisions 9 armored divisions of Iraq, trapped in the hospital As-Salam http://colonelcassad.livejournal.com/3119670.html zinc

In the Eastern parts of the city unit of the office of counter terrorism (known under the popular name “gold division”) could “clean up” a few small city blocks, but after 12 December and they stopped further progress, continuing to repel the attacks of militants.On the Northern outskirts of the city 16 infantry division stopped the offensive on December 3 after completing a “sweep” several nearby villages. On the southern outskirts of the Federal police stopped on the outskirts of the military camp of al-Ghazlani and Mosul airport at the end of November.However, the plan to storm the city from that direction apparently was abandoned. To the West of Mosul, the Iraqi units of the national militia of “al-Hashd Al-SHAABI”, in fact, has become an analogue of the Iranian Islamic revolutionary guard Corps, December 12-13, established control over the road of tal-ABT – tal-afar and also stayed anchored in the occupied territories. 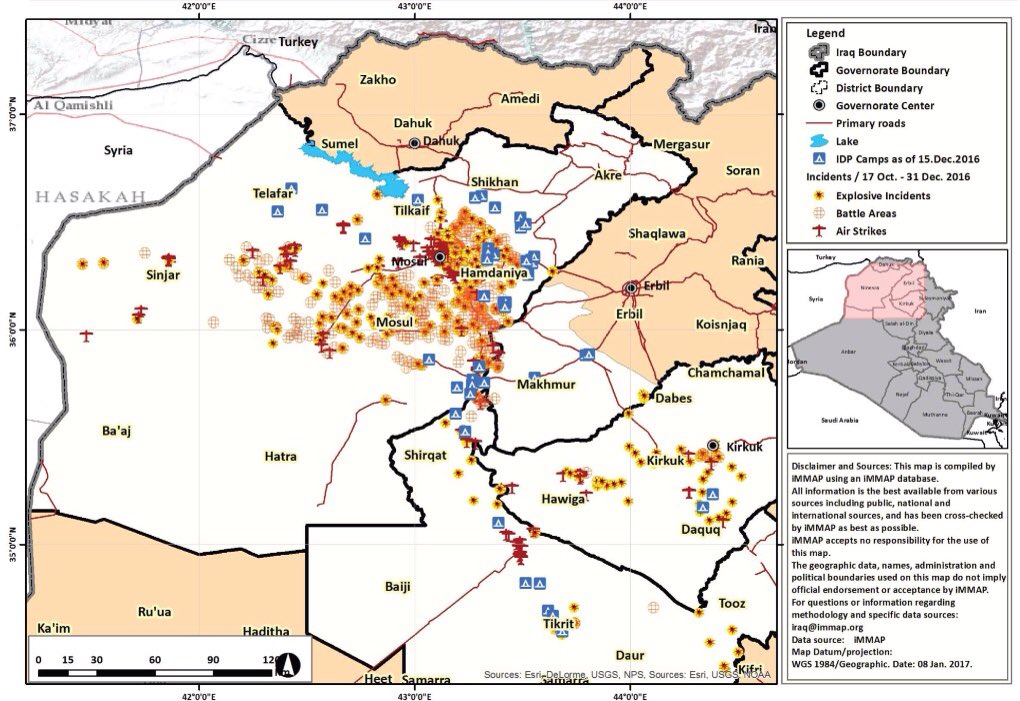 Suicide attacks and airstrikes in Iraq from 17 October to 31 December.

The average intensity of the air strikes and attacks of suicide bombers.

Part of the International coalition in the operation, limited to air strikes and artillery support forces of all three artillery batteries (one from the army and the U.S. marine corps and one French) and one rocket battery (HIMARS MLRS) – are unable to apply a sufficient degree of damage to the forces of the “Islamic state”, hiding in houses of civilians and prepared in a network of underground tunnels. Thus, the December 13 attack finally stopped.By this time loss of power structures of Iraq amounted to two thousand people (of which at least 400 dead). It was released on 28 city of MOSUL, about 300 villages 5400 square kilometers. “Mosul pot” blocked about 4-5 thousand fighters. 96 thousands of civilians have become refugees, to 4 thousand people died during the fighting and executed by militants, about 8 thousand were injured. The troops needed to rest, the staff – time understanding of the current situation, elaboration and adoption of new solutions.

It should be noted that the main burden of the operation to liberate Mosul fell on Iraqi troops and police forces. Part of the “Al-SHAABI” mainly operate East of the city, the Peshmerga active participation in the storming of urban neighborhoods does not accept, as well as not conducting active operations to the North of the road from Mosul to tal afar.

For the resumption of the offensive, the Iraqi command has carried out a regrouping of troops. In the Eastern part of Mosul was transferred from the North one of the brigades 16 infantry divisions and from the Central part of Iraq – 43 infantry brigade 11 infantry division. In the South-Eastern part of the city, to enhance the 9 Panzer division arrived several brigades of the Federal police of Iraq (analogue of the Russian internal troops) and some small detachments of militia.

Immediately before the renewed assault on the city the international coalition aircraft were finally able to destroy the last crossing of the Tigris river, linking Eastern and Western part of the city, thereby seriously hampering the possibilities of command of the rebels to maneuver available reserves. Iraqi air force the day before the start of the fighting were scattered over the city leaflets with an appeal to the people of the city.

From 07.00 on 29 December, government troops backed by aircraft and artillery, the international coalition launched an offensive from three directions – North, East and South-East of the city. To the North, two brigades of the 16th infantry division, reinforced by a brigade of the 15th infantry division was able to liberate the suburbs As Garden and Tuvalu to 5 January were finally able to enter the city, liberated the area of hay al-Habda and began fighting for territory of Mosul University.In the Eastern parts of the city unit of the office of counter terrorism acting simultaneously on two fronts freed the nine districts of the city, crossed a small Creek of Hasr – a tributary of the Tigris river and managed to reach the coast of the Tigris river in the “4th bridge”, thus completely cutting off while remaining under the control of terrorists, the South-Eastern parts of the city. In the South-Eastern parts of the city, the Federal police and units of the 9th armored division liberated the ten districts, including was able to re-acquire the hospital Al-Salam.

By 10 January for the second phase of the operation released on 20 areas of the city. The number of refugees increased to 136 thousand people. Data on losses of both sides – about his secret, about the opponents – exaggerate at times. The fighting continues in the city. The militants continue to put up fierce resistance, widely using car bombs, effective “medicine” against which so and has not developed. During the fighting in the town on 10 January, the militants have used 231 machine running death row.The leadership of the “Islamic state” expects “to sell expensive”, the Eastern part of Mosul, but probably not intended to hold him back – at the approach of government troops from the bridges across the Tigris river finally explode and damage (already blown up the “5th bridge” and “Old iron bridge”). The reserves of terrorists is not unlimited and obviously outside without makeup come to an end.

To 13 avnera Iraqi units took possession of the greater part of the district, where the University of Mosul and continued to move along the river from the South-East, gradually clearing the surrounding neighborhoods from the militants. Given the fact that the communication across the river was hampered by the destruction of bridges and aircraft of the international coalition, defence fighters in the Eastern part of the city is on the verge of collapse. Suicide attacks and sniper attacks can only slow but not stop the advance of Iraqi forces.

From a political point of view, the liberation of Mosul has to strengthen the position of the Iraqi government and allow the new administration of the White House to demonstrate tangible results of the war against the Caliphate. Islamic State losing Mosul will be one of the biggest defeats in the ongoing war and it obviously will have a severe impact on the structure of the Caliphate and its military and political prestige in the middle East. 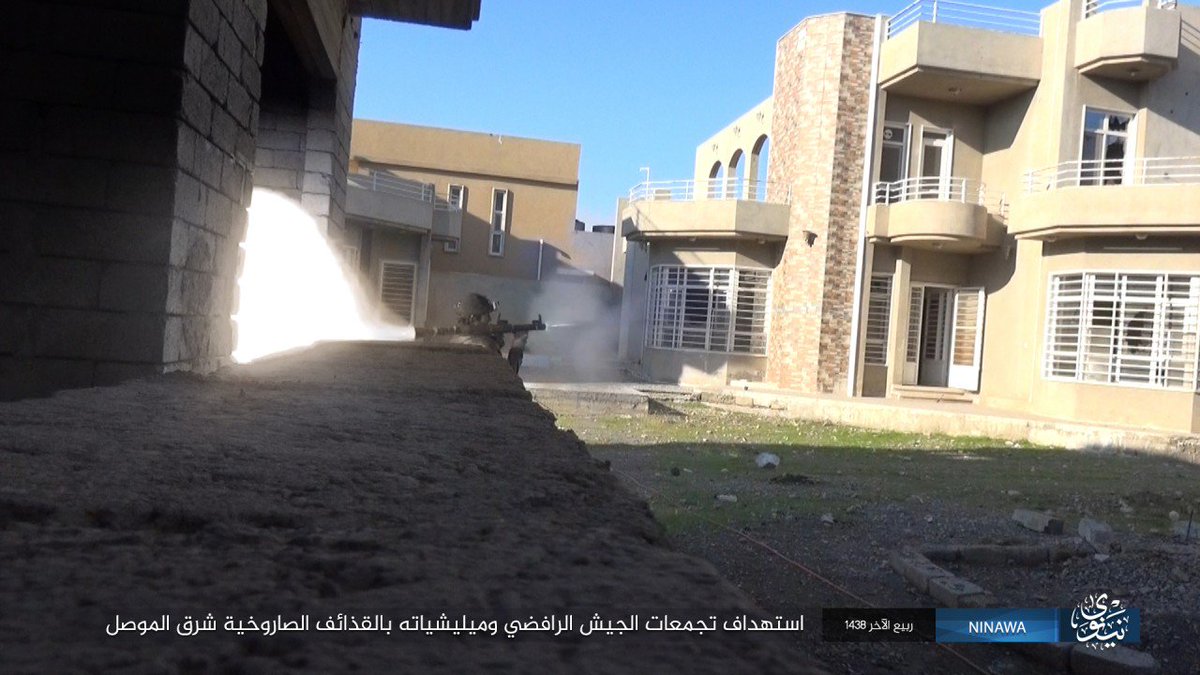 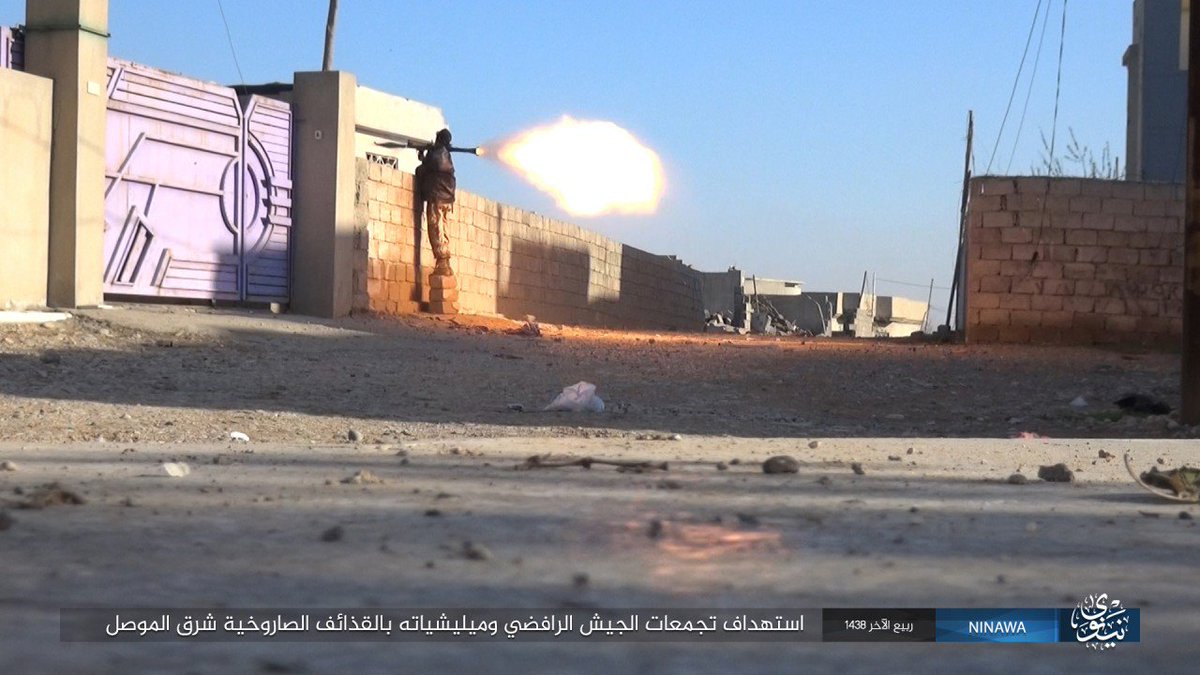 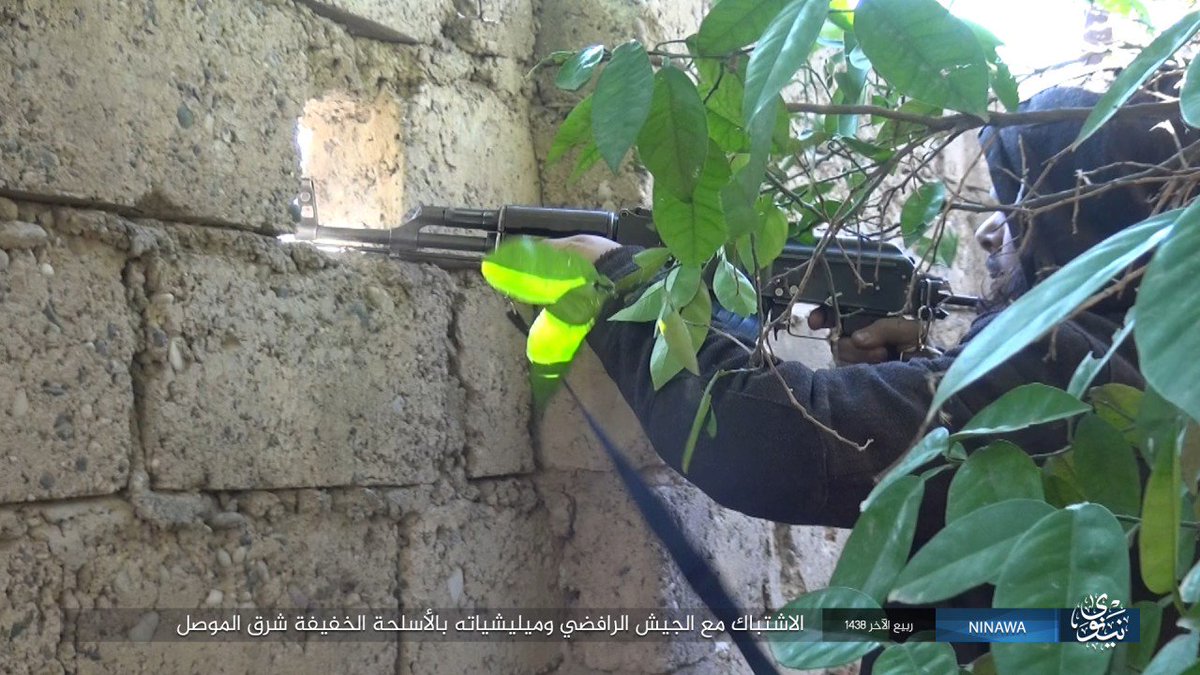 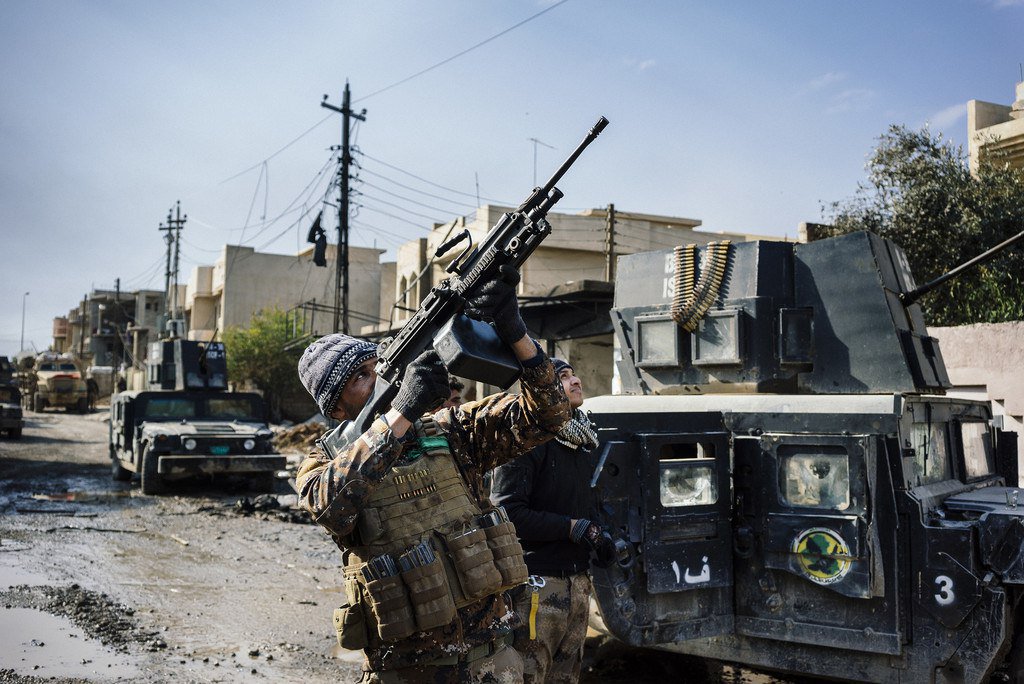 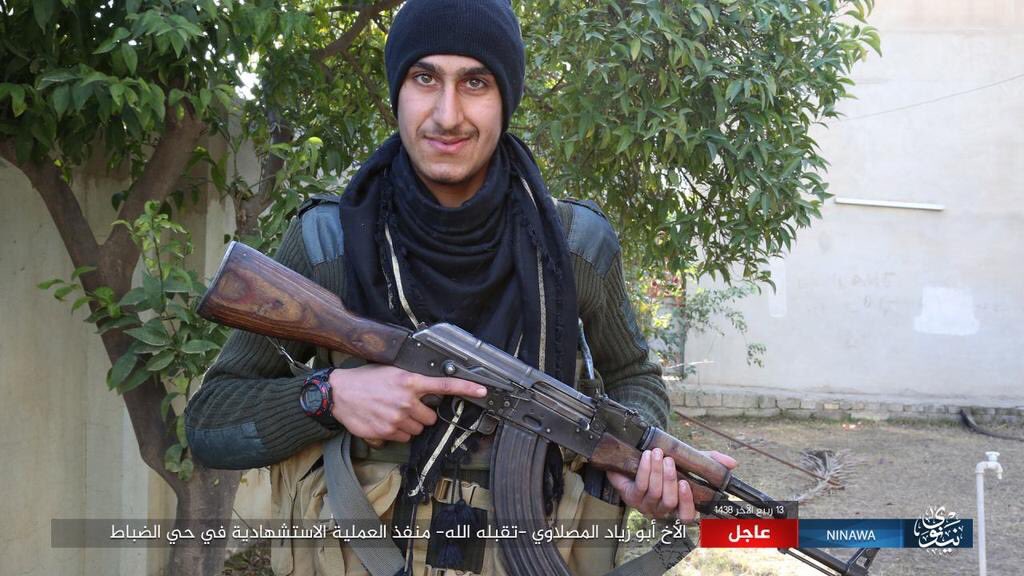 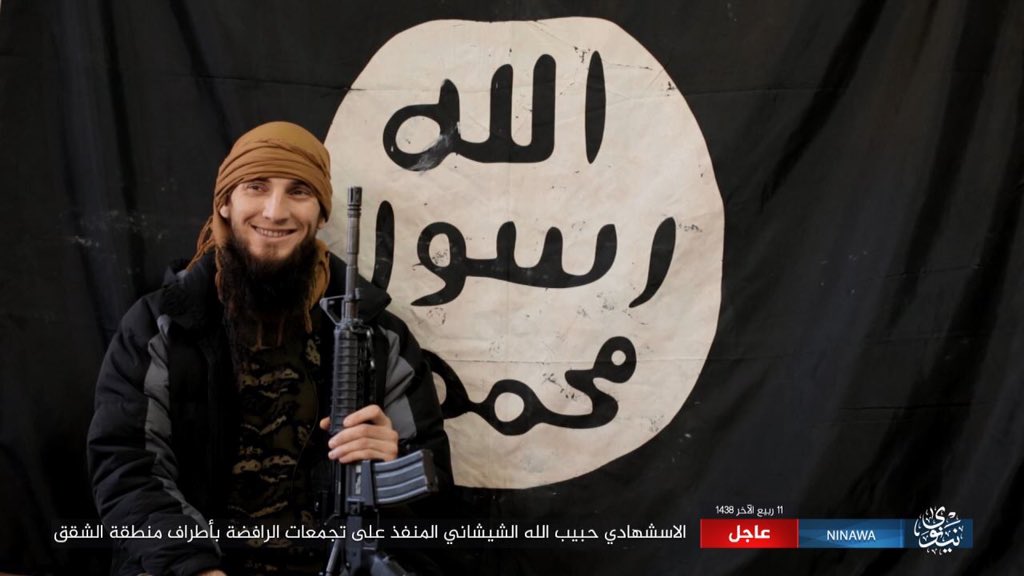 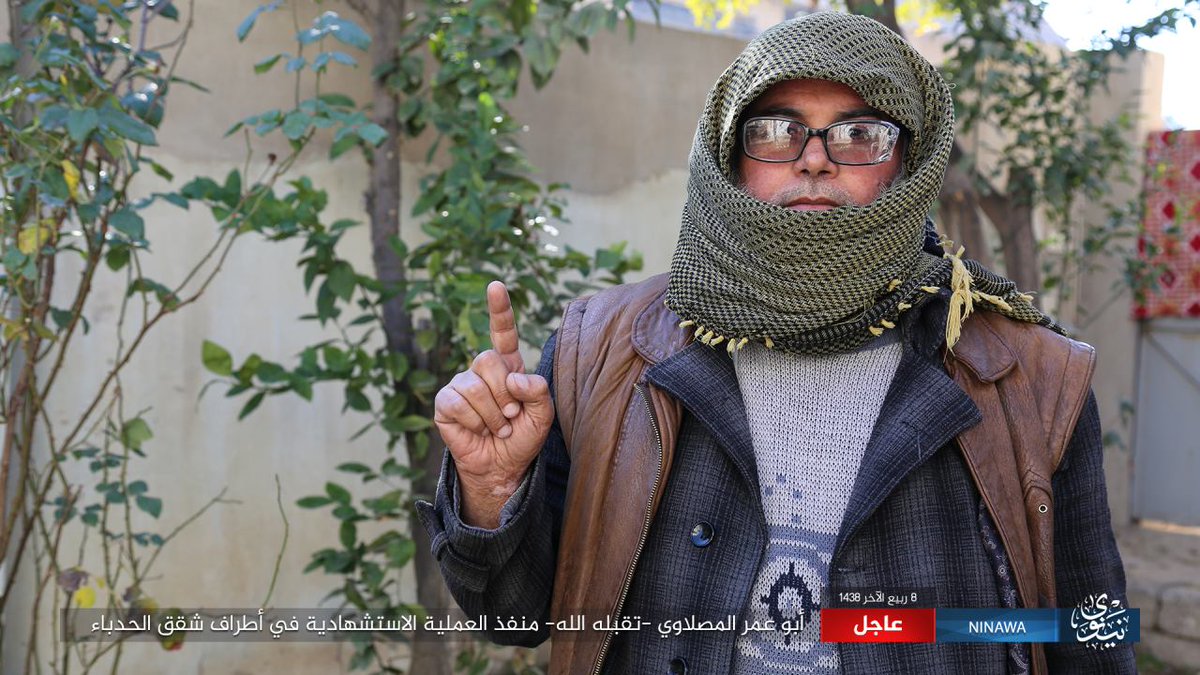 The entrance to the district Mutan.

The use of machines as obstacles to Shaheed-mobiles. 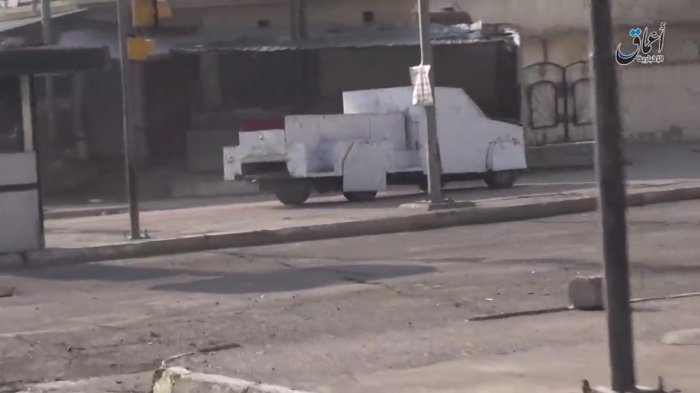 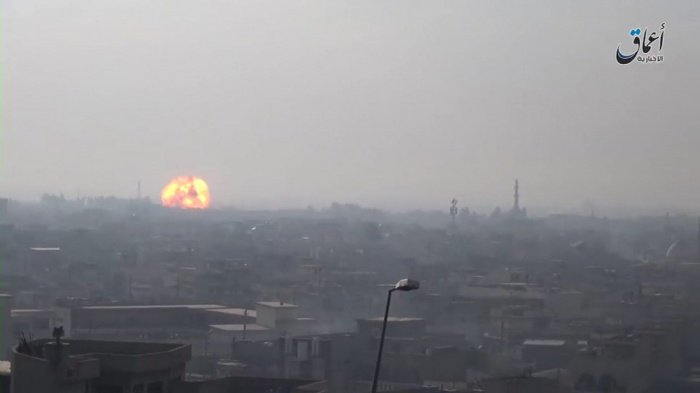 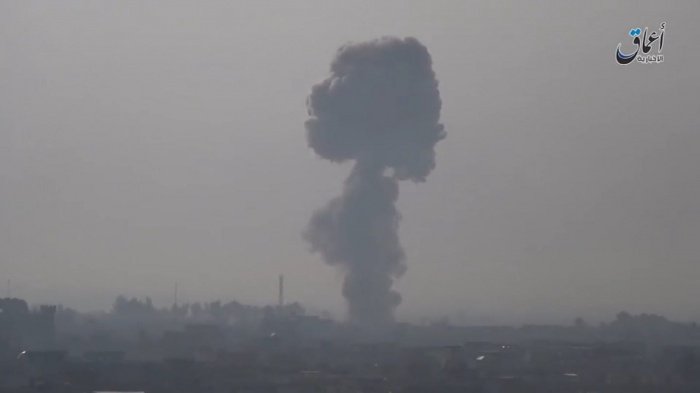 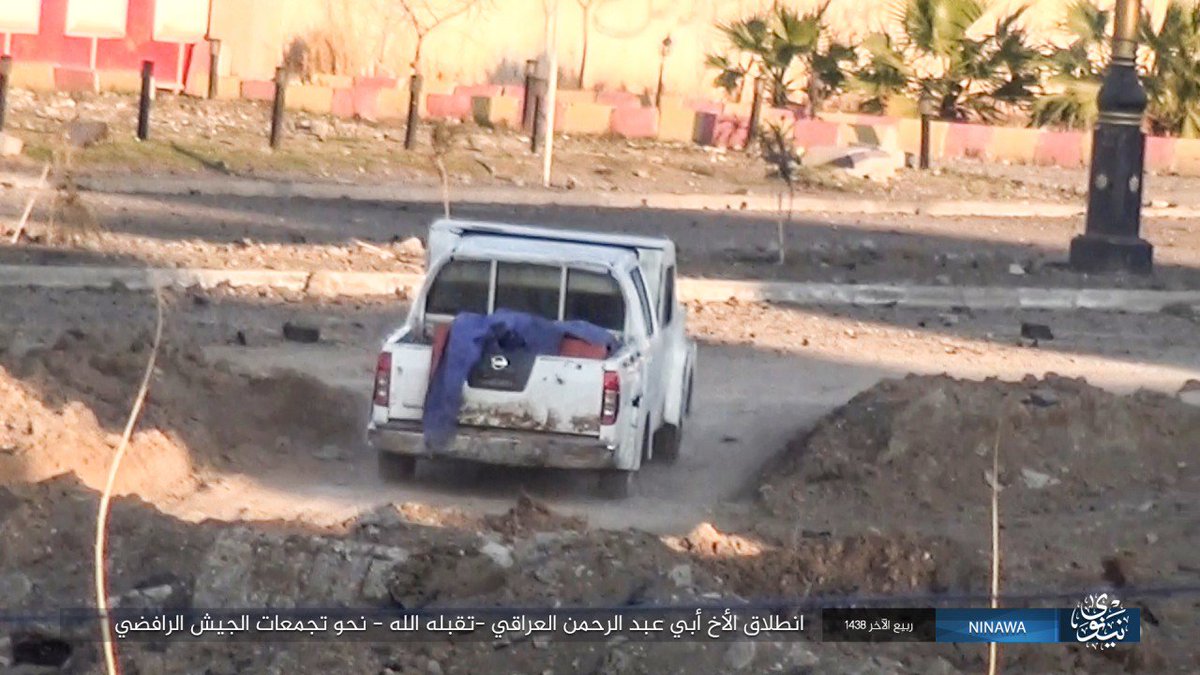 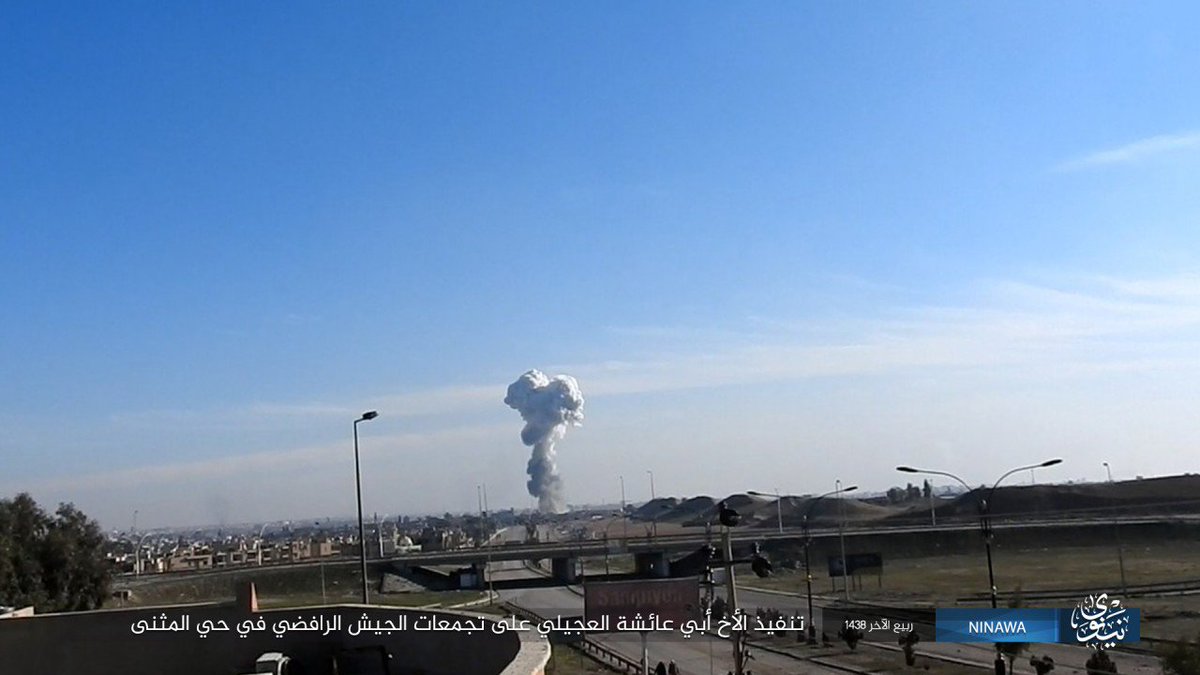 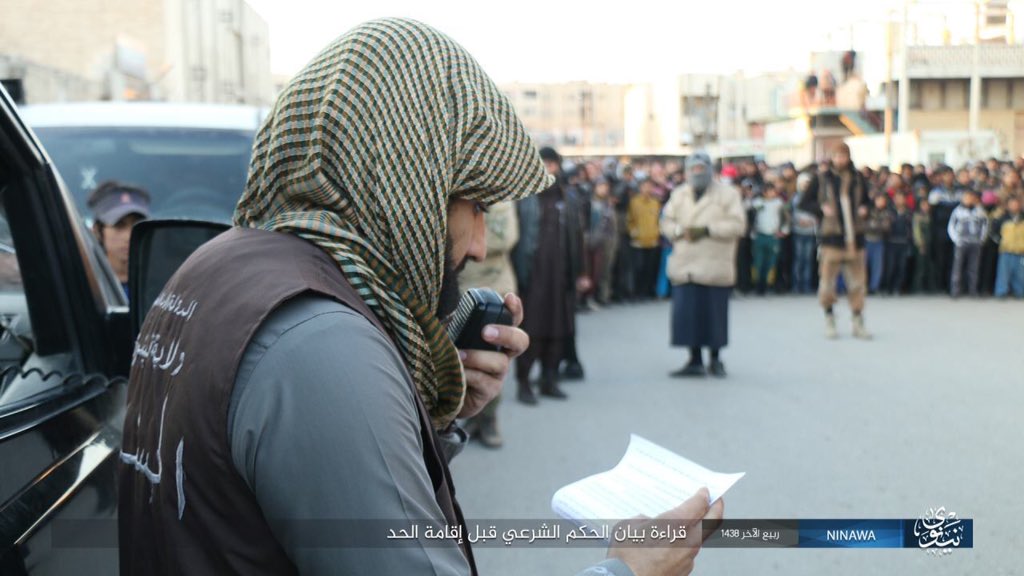 Public execution in the Western part of Mosul. The militants read out the verdict. 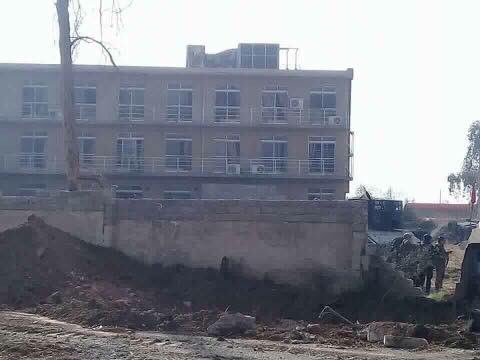 The complex of buildings of the technical University. 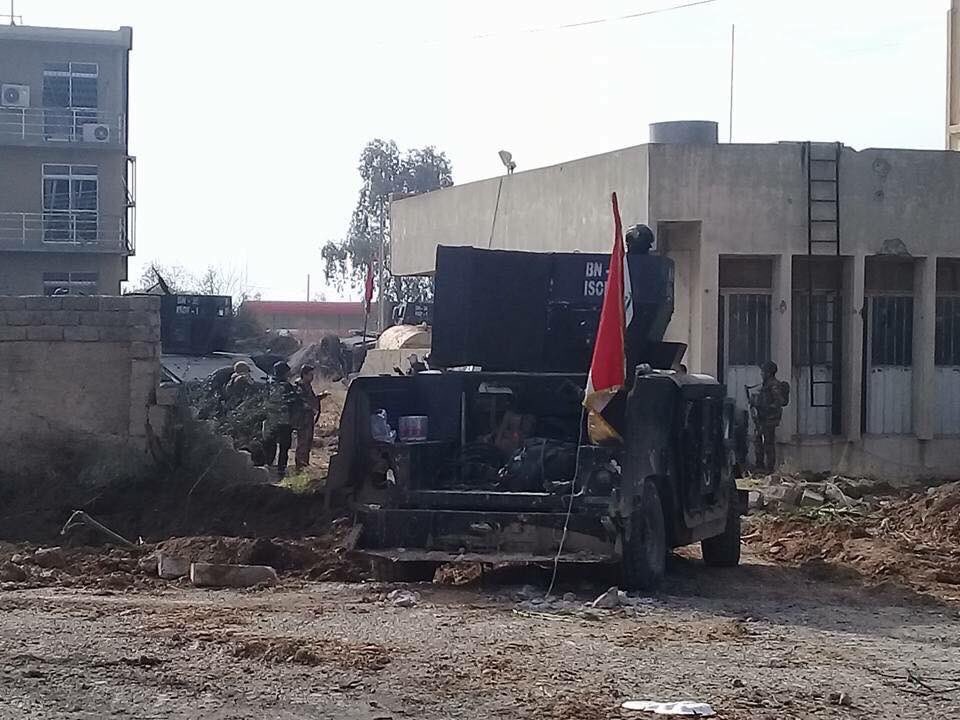 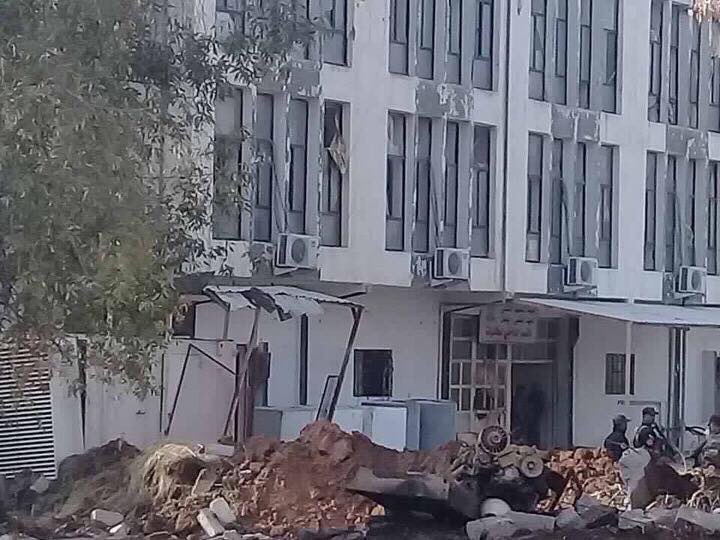 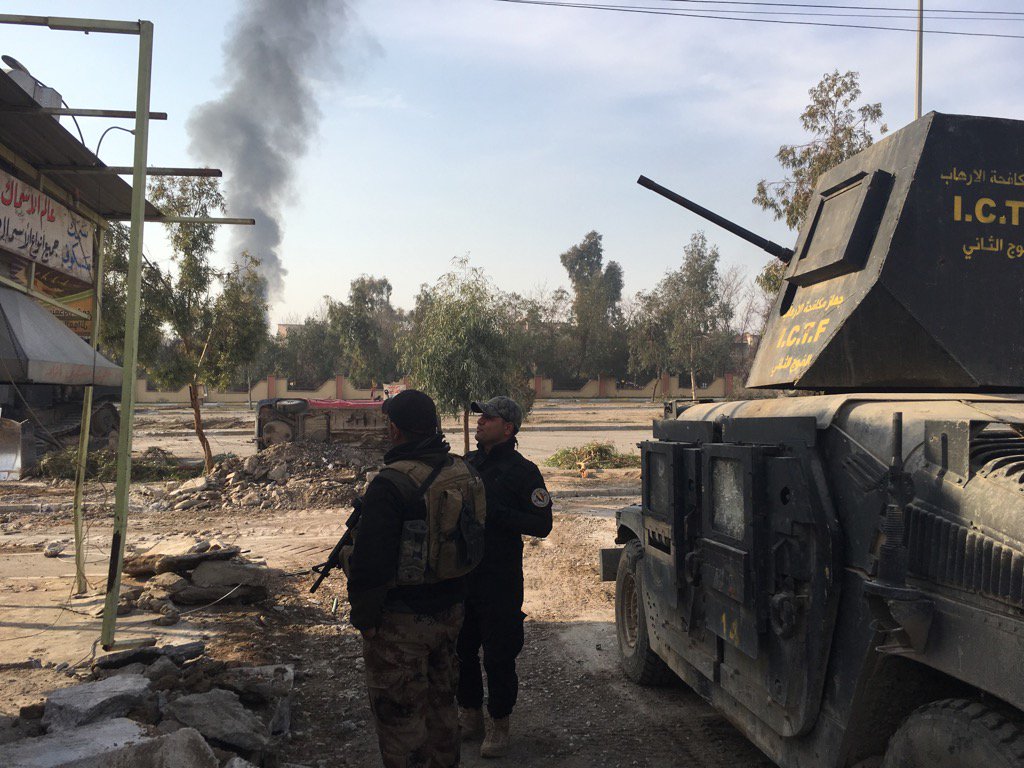 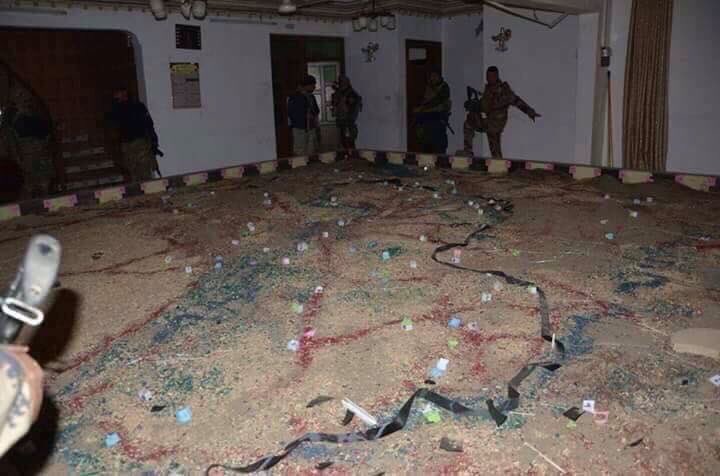 American weapons found on one of the captured warehouses of the Caliphate in the Eastern part of the city. 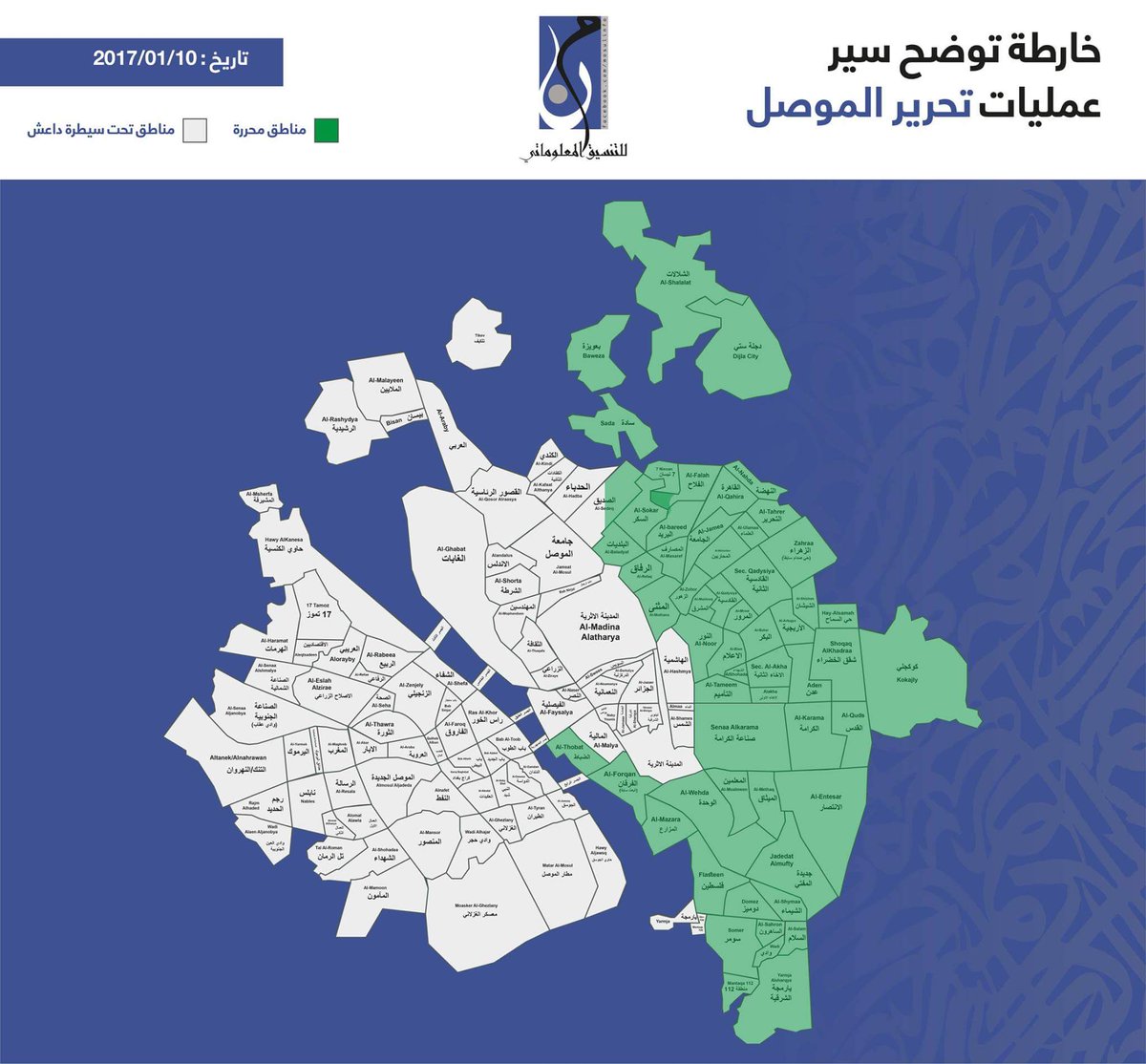 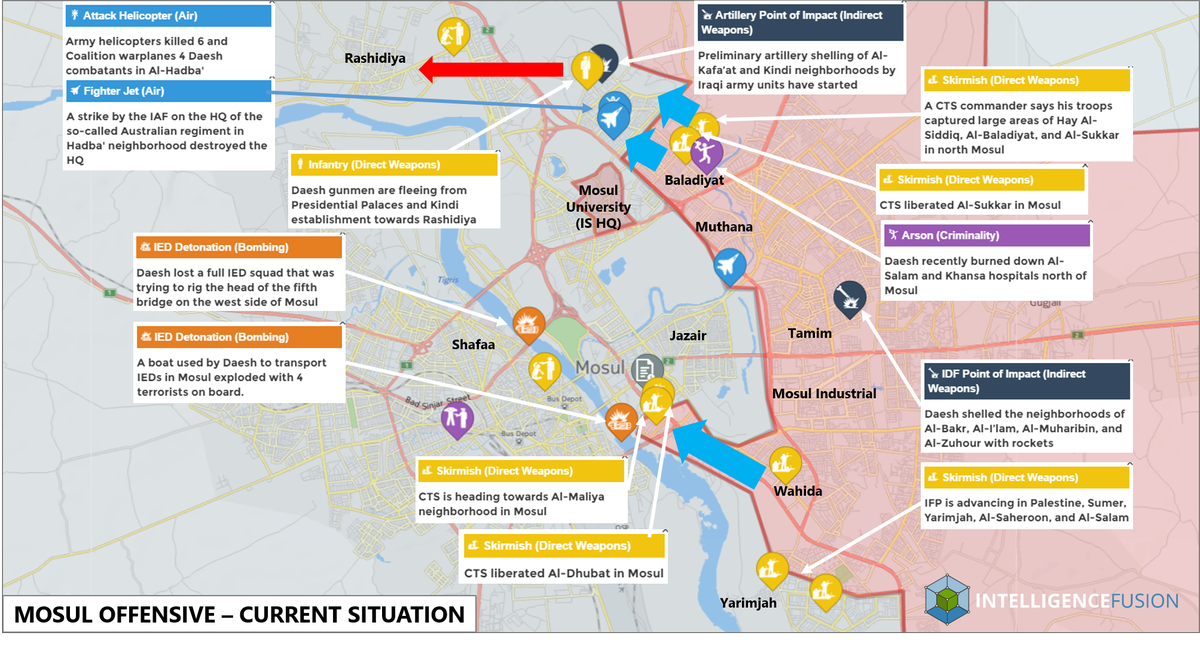 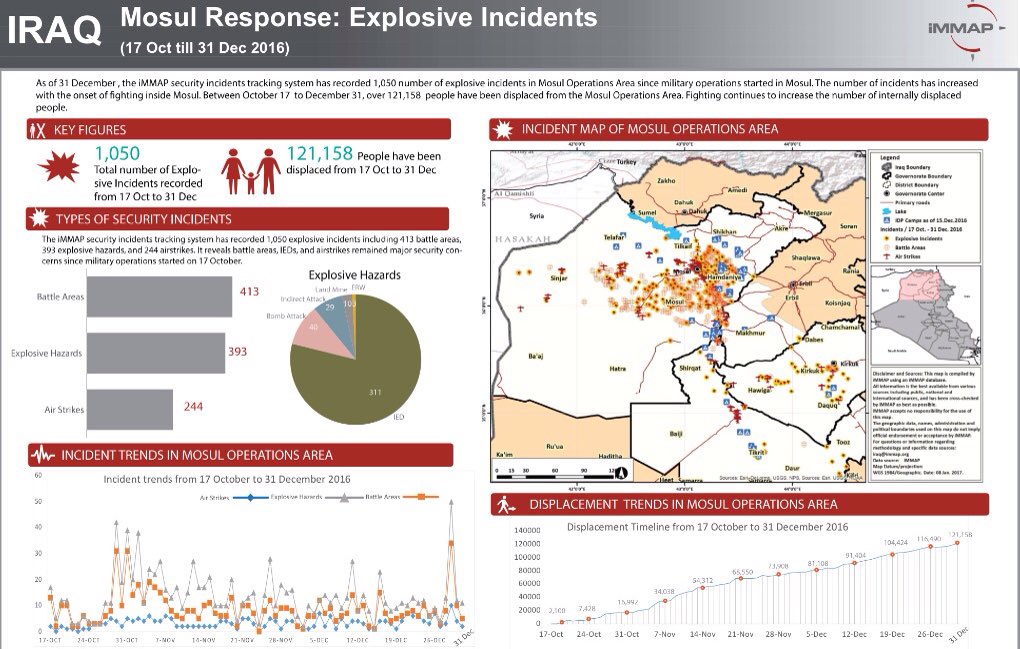