Briefly on important events in Syria.

1. SAA and allied groups launched an offensive to the East and North-East of the airbase Tiyas, pushing the Caliphate from the airbase in the direction Chuvashia and Gazala.

The front, which is stabilized in December, after failed attempts by the Caliphate to capture the airbase, again started moving, this time in the opposite direction. The priorities of the SAA full control over the crossroads to the East of Tiyas and promotion to the line, Julisis-Gazal, with a focus on the return of positions in the oil fields to the North from the road Palmyra-Ties. Not securing the Northern flank, to advance on Palmyra in General is pointless, “black” will inflict a flank attack on a stretched supply lines.So you first need to create a secure cover for highway to the North, to restore the locomotive and then start moving to Palmyra. 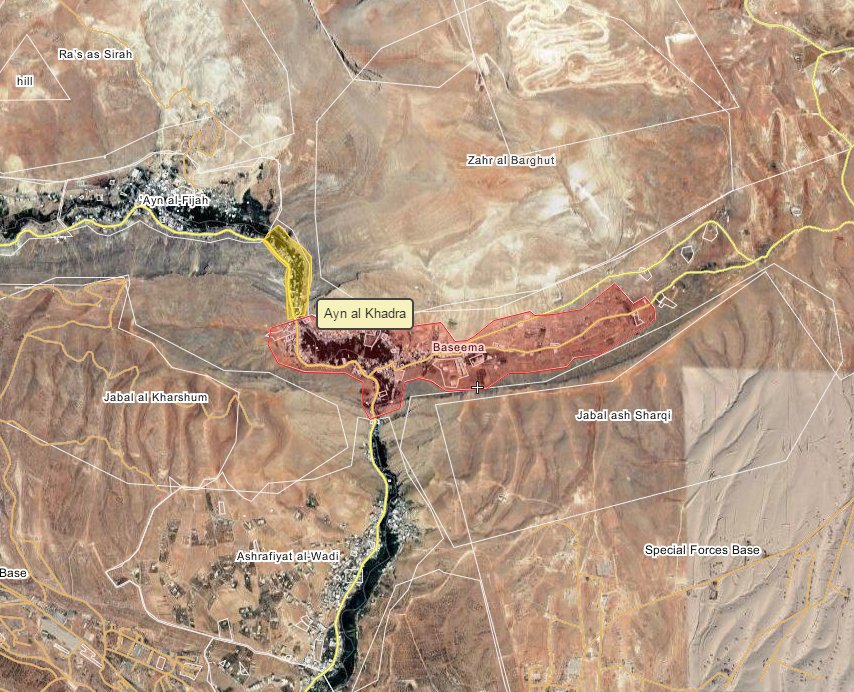 2. In Wadi Barada, the SAA is already the 3rd day finishes off the militants, who on his head rejected the truce. The army occupying a large part of the hills to the South and North of the valley, corny shoots sitting in the valley of the insurgents that suffered heavy casualties without any chance of success. Some have already surrendered, but the fanatics continue to resist. The result is nevertheless predictable – the army has already taken Bassima and moving across the valley to the North-West, clearing the buildings in the valley from militants.The only result of the stubbornness of the rebels, in Idlib them apparently leave less weapons during the disarmament, they now save can not, and for the Syrians the inconvenience of the situation is that the problems with the water supply of Damascus, demanded a few days more to solve them. The same applies to used here parts of the SAA and “Hezbollah”. In General, there is not much time left. 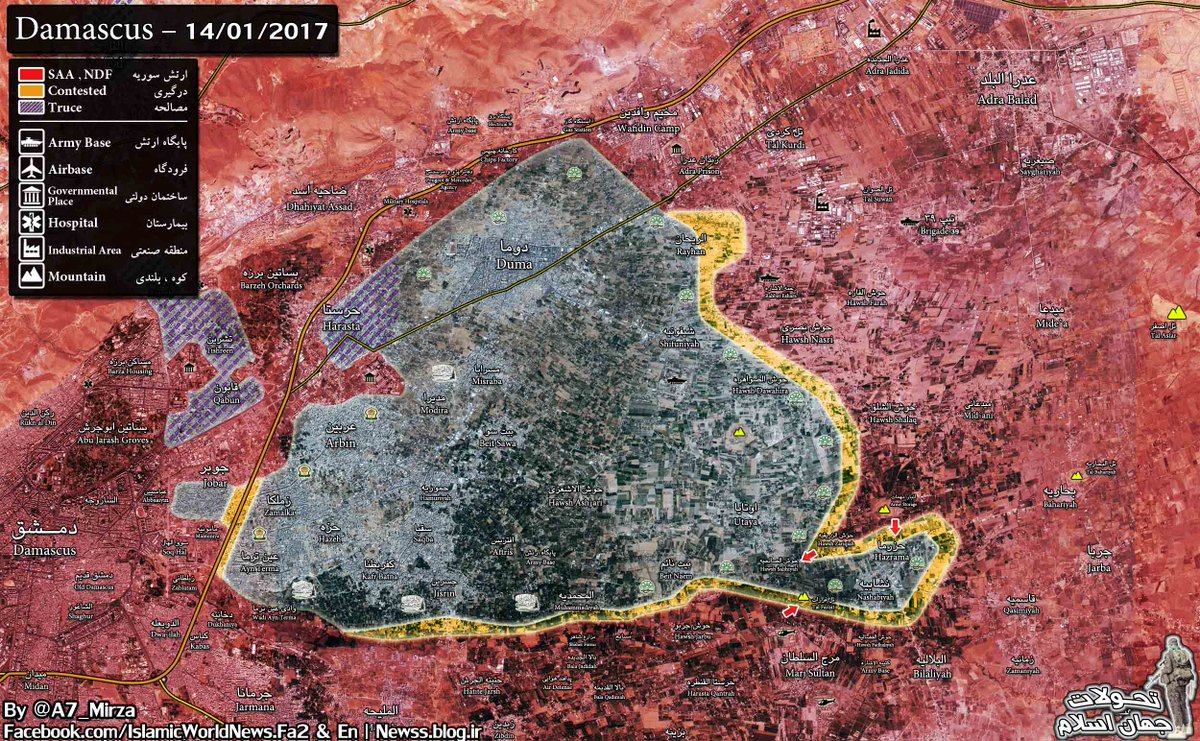 3. In Eastern ghouta fierce fighting continues in the area Asrama. SAA is trying to take tal Ferzat that will pose a threat to the environment fighters “Jah al-Islam” in the ledge on the West of the enclave. In recent days, the militants several times powerfully counterattacked, but today started to fizzle out and there is a real danger that the Syrians will be able to cut off Eastern ghouta another piece, not so long ago were cut off the ledge to the North of Rayhan. The main purpose of this operation is to force the militants to retreat from Mashabei, as they were forced to do during the fighting for tal-Kurdi. 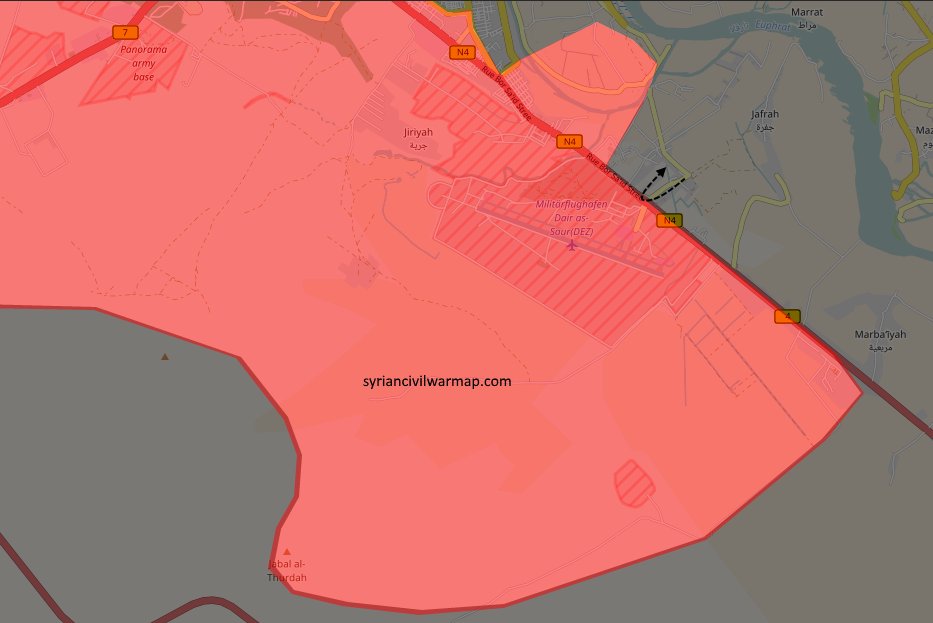 4. In Deir ezzor the militants of the Caliphate once again made attacks on the positions of the SAA. The main blow was delivered to the North of the airbase of Deir ez-Zor, but to achieve success the militants failed. After a fairly serious attempt to break through the defense of the Syrians, “black” after suffering losses withdrew to their original positions. Black said that SAA has lost 20 people killed, the Syrian sources said that the militants have lost from 20 to 30 people + black lost 1 tank. During the fighting the high activity showed Syrian air force support of the defenders.All of this suggests that the Caliphate still has not given up hope sooner or later to put the squeeze on the enclave. But here that case when “the eye sees, but the tooth is itching”. The attack on Deir-ez-Zor over the past year and a half has cost the Caliphate in terms of losses and wasted resources.

5. The situation in Northern Syria http://edmaps.com/Battle_for_Northern_Syria_January_13_2017.png is of inertial nature. The Turks still stands to the West of al-Bab and full-fledged assault on the city begin. The Kurds continue to hill area to the West of Raqqa, the Caliphate taking leave of the village – the main forces of the black there’s predictable escaped the encirclement leaving the ledge to the North-West of Brandy. The main battles are still ahead. In relation to the SAA, the Syrian sources for several days anticipating the attack on Deir Hafir and then Tabqa, indicating that the main group already assembled in the area Kouvaris and waiting for a visual signal.

In General, the situation in the North remains at the threshold of significant changes, have to wait for active actions of the SAA and the Turkish army, and that would do the Americans and the Kurds after the release to the main defensive perimeter of Raqqa. 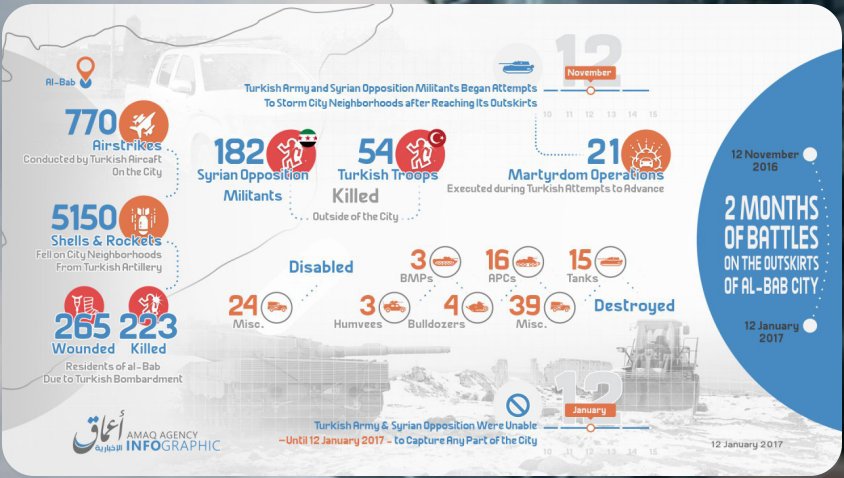 The Caliphate also produced a version of the loss of the Turks at al-Bab in 2 months battle for the city.

Stated – 54 killed a Turkish soldier and 182 militants of “moderate opposition”. Destroyed 15 tanks, 22 armored combat vehicles and 4 bulldozers and 39 avtomobiley. 21 undermined by Shahid mobile. The Turks made 770 airstrikes. In the city killed 223 and injured civilians. 265 About their losses “black” is silent, but according to the Turks, and the “moderate opposition” they made up with Nov order 280-330 killed and several tanks and armored fighting vehicles.

The Turks apparently all of this into account and preparing to storm more thoroughly, to prevent the Caliphate no chance.

If we talk in General about SAA, Assad retains the strategic initiative in the war and has the ability to vary the direction of impact. The truce as expected turned out to be partial and the war goes on.

The talks in Astana and is expected to start on January 23, and the statement of the foreign Ministry of Turkey agreed with Lavrov’s invitation to these talks of representatives of Trump, in order for the first time after Trump takes office, the United States will take part in the discussion on the current situation in the Syrian war. Apparently there is and will be the first consultations between Russia and the United States on the subject of clarification of relations in Syria. Immediate and decisive progress is unlikely, it’ll probably be probing of positions.