In Eastern ghouta, the SAA and allied forces continue an offensive in the area Asrama. After taking the base to the North of the city, the troops continued to besiege the militants “Jash al-Islam” in Hazrami and Nasabi. The truce does not apply here, the intensity of the fighting is high enough. Syrians in East ghouta stick to the old strategies associated with the gradual cutting off pieces of the enclave, in view of which the largest enclave of insurgents in the province of Damascus slowly but surely reduced in size. However, the militants are not going to give up, as well, and agree about anything with Assad.But here it is – liberated enclaves also said this, until the reality was forced to leave in Idlib. I am sure that this year and the enclave in Eastern ghouta will be finally eliminated.

In Wadi Barada, fighters, despite the agreement of surrender, began to obstruct Syrian engineers to restore the water supply of Damascus, and destroyed one bulldozer. Over the next escalation is “Al-Nusra”, which although is in the minority here, but to go to Idlib wants. Of the SAA in this regard, again resumed the offensive North of the valley, taking a number of hills. Along the way, the fights, the negotiations with the militants in the valley, to affect “Al-Nusra” and piled together in Idlib.While the militants are not agree, they will be forced to truce – today there were widely used aviation and artillery. Along the way, the army occupied part of the territory, where militants after the start of the truce left the strongholds and checkpoints, as well as those positions where the militants retreated after air raids. As previously indicated, the agony of the enclave will last max 1-2 weeks and will end with a traditional departure in Idlib.

Well, “Al-Nusra” once again showed its complete barbarity, even in relations with their “colleagues”.

In Deir ezzor, the Caliphate continues to attack the enclave. The army as a whole holds major positions, but for the last 3 months the enclave has slightly thinner in size – the main loss is in the hills southwest of the air base and part of the city’s neighborhoods. The recent episode of attack of the airbase of ATGM with the loss of two L-39, reflects the current problems of the SAA in the enclave – deliver reinforcements and ammunition sufficient only to hold the defense, but all attempts to expand the enclave or to recover some previously lost positions in the al-Bailie or the hills to the South-West of the airbase not bring success.By itself, the enclave with external support can exist for quite some time, but not indefinitely, as the Caliphate is constantly attempting to find somewhere troops and to probe the enclave strength. Now of course a considerable force of “black” are diverted to fighting in the area of Tias, Raqqa, al-Bab, tal afar and Rutba, but this does not mean that no attempts will be made to release additional forces for new attacks on Deir ez-Zor.The solution to the problem of Deir ez-Zor is possible only by the return of Palmyra and the surrounding oil fields, followed by deblocking operations along the route of the Palmyra-Deir ez-Zor (which is to the loss of Palmyra was planned for the spring of 2017) that is strategically risky. Overall, this enclave remains a major headache for Assad and the Russian coalition.

Yesterday revived the front to the East Rustavskogo of the boiler. The militants are concentrated to the battalion of infantry with support of armored vehicles tried to move towards the route of HOMS-Salaam, which plays an important role in the provision of Aleppo group of the SAA. Strategic sense of attack is identical to the raiding operations of the Caliphate on the track Khanasser-Aleppo in 2016. To the southwest of Salaam was the scene of bitter fighting. Via HOMS and Hama in Salamis SAA throws reinforcements to arrest the activity of the militants. At the same time intensified fighting in El Latinskom ledge in North Hama.Resources the militants, even stuttered on the strategic operation breakthrough to Rascanska pot, but so far, the fighting there took a traditional positional – heavy losses of the parties in the autumn campaign, few had exhausted their offensive capabilities.

It is also worth noting that in HOMS the militants of the Caliphate blew up the plant Hayan is responsible for the supply of gas. As a result, from 1 to 1.5 million Syrians were left without heating.

The fighting near al-Bab yet continue to carry positional and pass to the West of the city suburbs and the city hospital. The Turkish air force and artillery inflict permanent blows to positions of fighters and city blocks.At the same time attempts to move South of Kubyshina (city East of al-Baba) to strain the defense of militants in the East, for now front configuration is such that the militants can focus all their forces to repel the attacks of the Turkish army from the West and on the good, the Turks have to create a number of problems for fighters, so they were forced to stretch their limited power. But in General, Turks are still rather sluggish character, full 2nd storm hasn’t started yet, still we see the stage of training, but I have not much time left to wait. 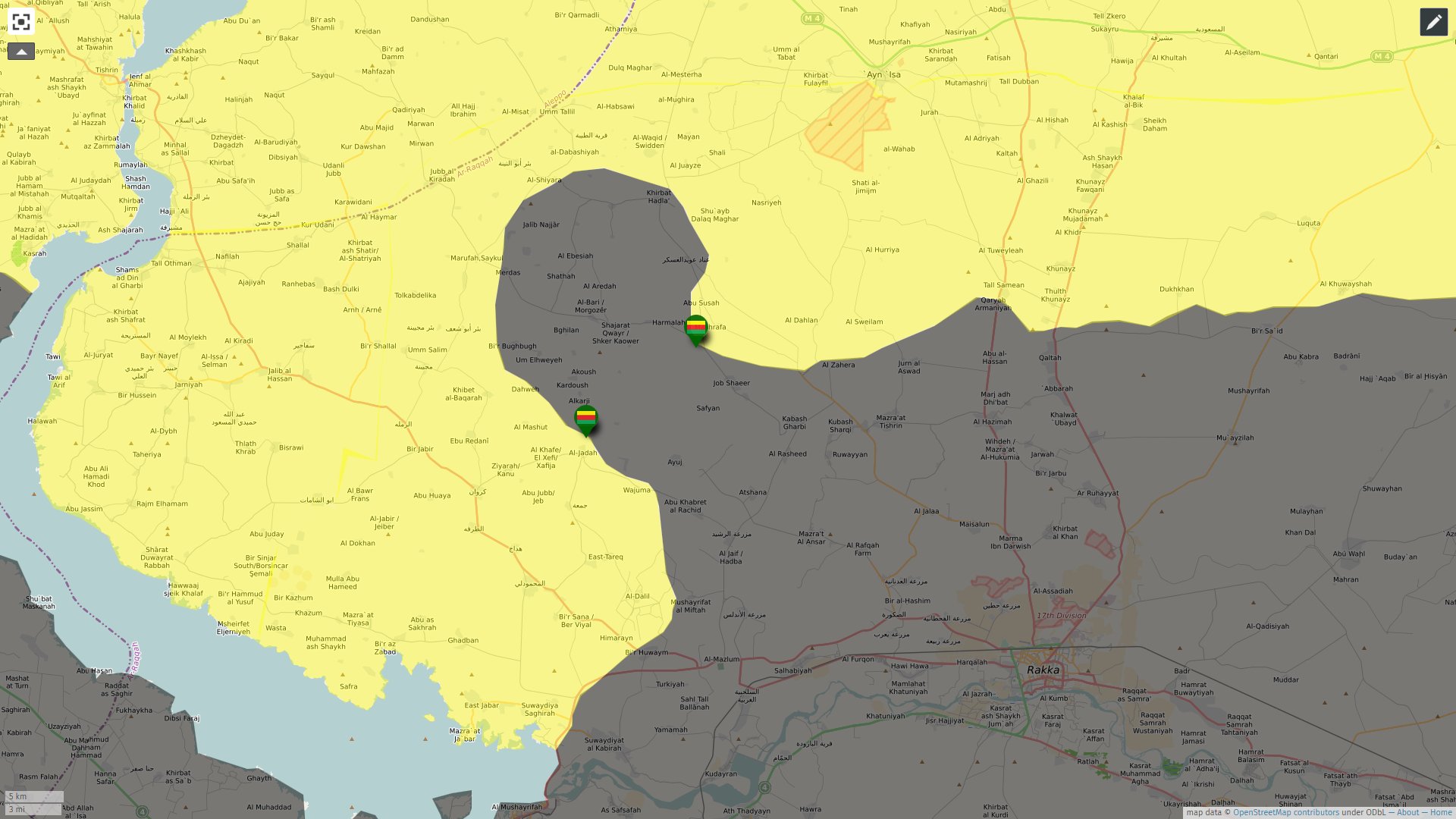 The Americans and Kurds things continue to go well. Moving along the North Bank of the Euphrates, they advanced to the tabqa dam and took several villages to the North of the river. Just to the North formed a kind of ledge, which will be stripped in the coming days, serious defensive positions in the Caliphate there, so the command “black” is not likely to be for it to cling to and will continue to divert troops to raqqa, where it is planned to organize a major resistance. 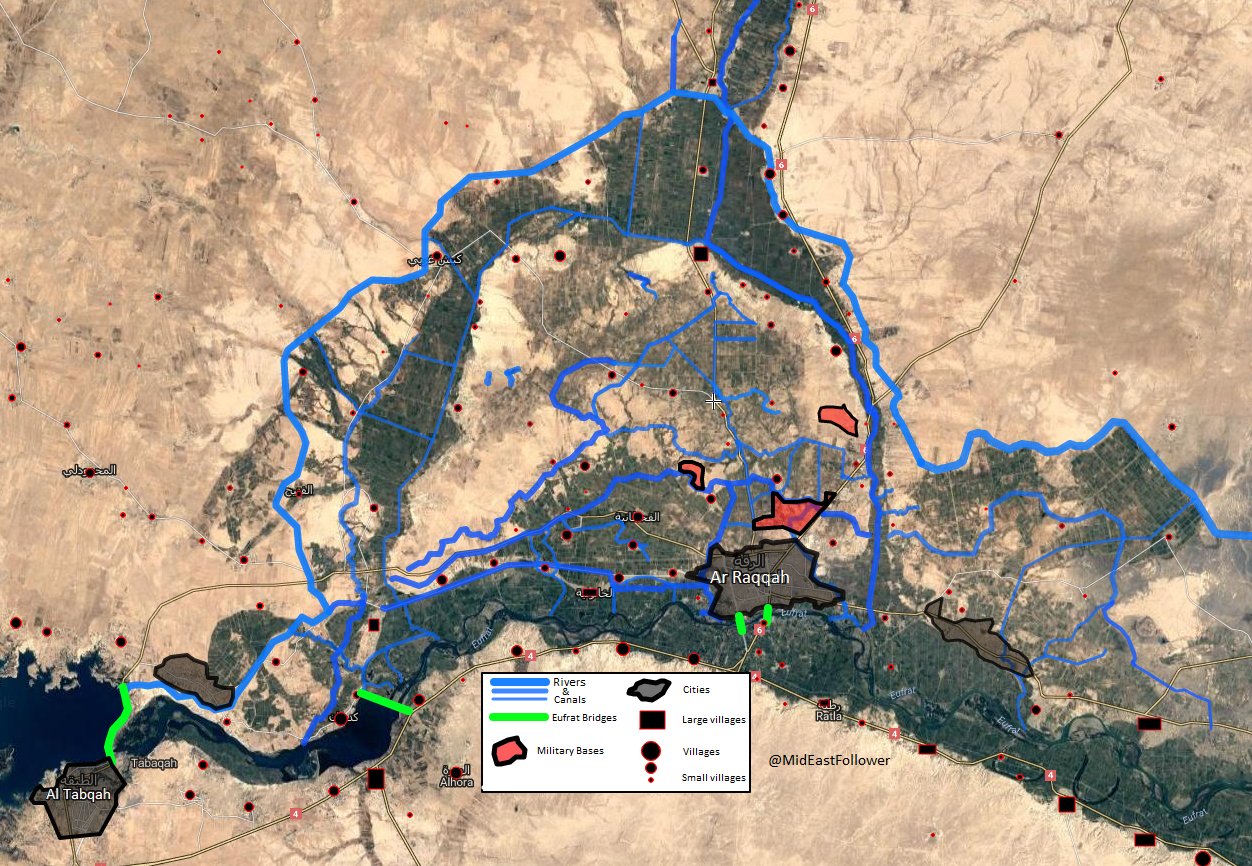 Complex terrain in the area of Raqqa conducive to long-term defense – a large number of villages and tributaries of the rivers, canals, military facilities – all this creates a fairly effective framework for the defense of the capital of the Caliphate. But it is rather the issue of the spring campaign of 2017. So far, the task of the American troops and forces SDF/YPG cleaned the assumptions, to the West and North-West of Raqqa.

1. In the area of Tiyas are positional battles. Much success the parties are not observed. About the attack on Palmyra is not talking.

2. South of Aleppo, the Syrian air force and SAA artillery is treated the position of “Al-Nusra” setting the stage for an attack towards Saraqib highway-Aleppo. The battles here are positional. The main goal here – Rashidin, Khan tuman, al-Carasso, al-IMS.

3. Across Syria have continued to rattle the terrorist attacks on the territory controlled by Assad, and the territories controlled by the militants and the Kurds. Mainly the attacks are the responsibility of the Caliphate. All of this for years.

4. Continuing in raqqa public executions of persons suspected of having links with the “crusaders” and competing terrorist groups. The propaganda of the Caliphate promises that soon the enemies of the prophet will be broken, but it looks not very convincing. Reminiscent of the ramblings of Goebbels in 1944.

5. A funny moment in propaganda film “Caravan of light”, one of the bombers (invalid without legs) told me that I have long wanted someone to blow up the bomber-mobile, but in his Wilayah was a big turn on Shaheed-mobile. Then he went to Raqqa, but there he was refused, because the waiting list is large (a lot of suicide bombers, and cars and explosives a few), and he is cripple and there are more worthy bombers. Then he went to Mosul, where finally he was given the desired Martyr-mobile and he was able to undermine the two Iraqi BMP. Bureaucrats are everywhere.

In General, the parties expected the talks in Astana on January 23 and subsequent negotiations between Russia and USA that somehow will clarify many important points for understanding the future course of the winter-spring campaign of 2017. Prerequisites to a complete end of hostilities of course not – it is about changing foreign policy situation around Syria and the definition of the list of hot fronts, where fighting will continue and which will be created by military means the conditions for the subsequent peace talks.This negotiation step is necessary to consolidate a new military-political reality established after the defeat of the “green” in the battle for Aleppo.