Interesting and very comprehensive overview of the military March “Admiral Kuznetsov” to the shores of Syria.

.
The first entry on the new mixed air group (MiG) in my journal dated 16.05.2015 (reference 1). She was dedicated to the production of an aircraft carrier in dock (PD-50) 82 SRZ and was rather emotional than practical, for 14 MiG-29K(UB) was already available, which could not be said about the flight experience of their pilots, if not to assume that pilot them will be test pilots. But the dream and the dream… 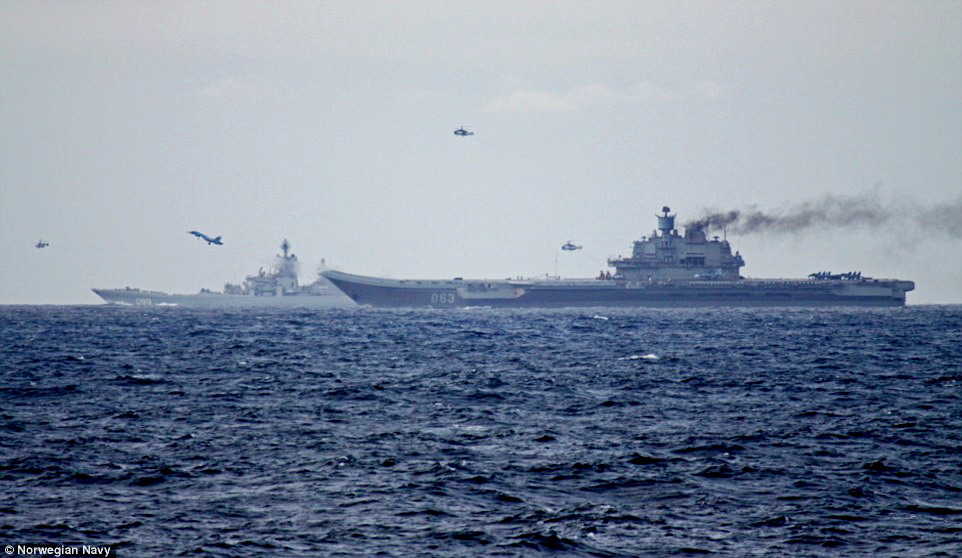 Then (as if for mockery of public opinion) began the endless “go ‒ no go” (link 2, link 3), and lasted for this mess at least six months, even though the hedgehog, it was clear that the presence of two most powerful ships of the Russian Navy (according to indirect data TARKR “Peter the Great” also were going to hike) at the point of the World ocean, where the fate of the world is vital as the Russian Federation and its Navy. As the forces aggravate the situation, some guests of the magazine, which gave 99.99% of that “Kuznetsov” with MiGs in Syria will not go. All this time I’ve banged my head into a wall of misunderstanding, trying to break her and prove otherwise.

In the end, common sense prevailed.

In General, along with the prediction of the 3M14 missile attacks from the Caspian sea through the territory of the Middle East (link 4) and from the Board of lbf “Rostov-on-don” in ISIS-controlled territory (reference 5), based on BS CAG “Admiral Kuznetsov” in the Mediterranean sea with the MiG-29K(UB) on-Board (albeit with a delay of 10 months), inclusion in the CAG “Peter the Great” and “Severomorsk” (reference 6) and operate su-33 shore (see reference 7), my status as a “prophet” gradually moved from the category of “coincidence” in the category “system”. How could anyone not concerned by this, but I don’t see nothing wrong to be reminded of my humble achievements of those who know and to let know to those who do not know. Now, when I once again lost a stable income (the curse, gravitating over me the last few years), any advertising (self-promotion) is not excessive.

Smoke on the water

“Kuznetsov” in fact, not 30, and 26 − a flourishing age for the aircraft carrier, if you take care of it. And care for it − I’ve said many times that he even based in 35 shipyard. And these writers from the Daily Mail − that they are non-destructive testing carried out on the subject of rust? It is unlikely. With regard to age, in the British Navy S28 SSBN “Vanguard”, which for 23 years(a small difference), there are 7 frigates of the type 23 “Duke” at the age of 22 to 25.5 years (too small), there are finally four PLA type “Trafalgar”, the youngest of whom is 25 years old and the oldest was really 30. How are they with rust?

As for smoke, if in the domestic Internet-resources not exaggerated the topic (casually playing up to our enemies), I wouldn’t even pay attention to him. The ship is not nuclear and not gas turbine, and the turbine power plant which, like it or not, sometimes give radical black smoke. But here is the first photo posted below, the smoke is quite decent consistency on the second − Yes blackish, but not that important. The main thing is that 35 shipyard “Kuznetsov” put on the course and he got to Syria, as far as we know, without a single failure. He has at all, except the first BS (23.12.95-22.03.96), with the powerplant it was more or less okay.

As for “provocative maneuvers,” the English channel is in international waters, though the British call it the English Channel. Us that, because of this we had to go gardens around Ireland. Would they… 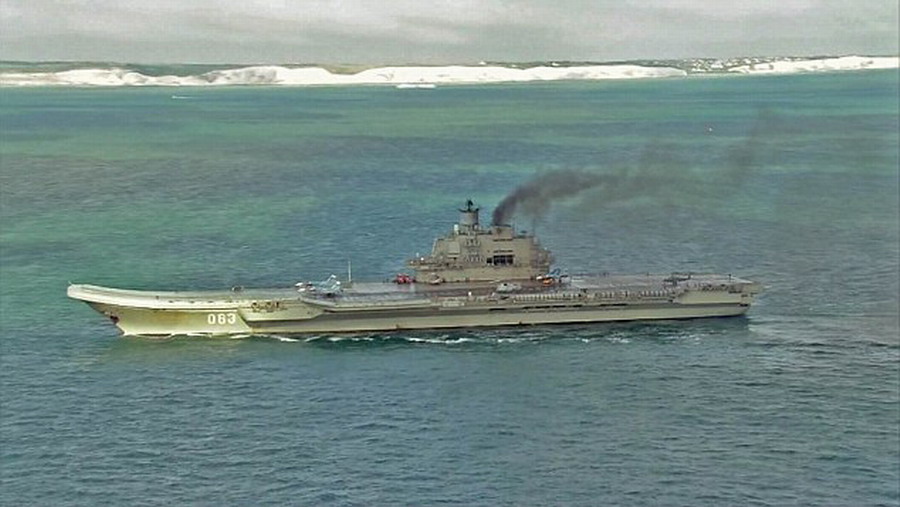 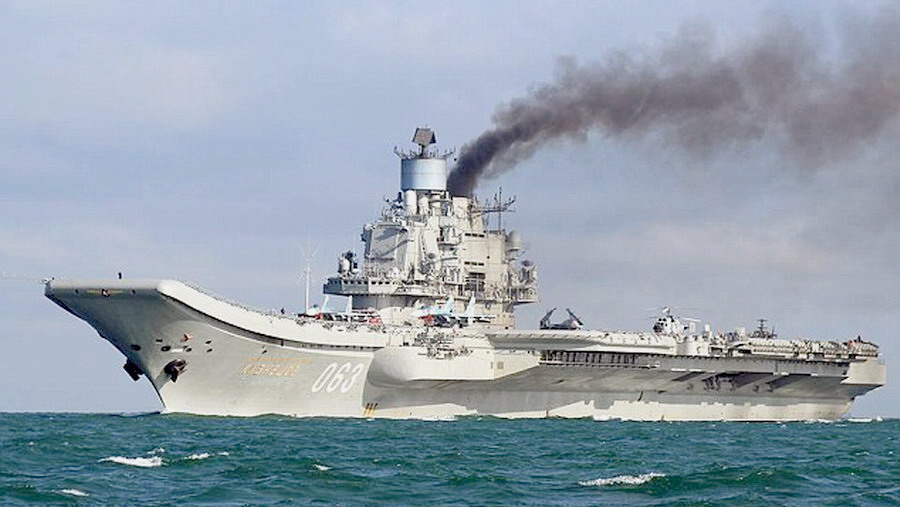 3. “Admiral Kuznetsov” on the way to the North sea (photo from dailymail Dover Marina.co.uk)

su-33 as a stormtrooper

Official reports on this subject I did not come across, but I would like to believe (and I believe) that this is the case, according to a colleague

naval_flanker, namely: before the campaign, part of the su-33 was equipped with the system (a specialized computing subsystem) SVP-24-33 (“33” − my imagination, inspired by the previous modifications, adapted to LA) produced by the company “Hephaestus and T” (Zhukovsky, Moscow region) (reference 9 with the filing

balbesus). As a variant: the use of “Hephaestus” (the informal name of the military of the modernized su-24M) as the class of leading in close formation a group of su-33 without SVP.

That su-33 work on the shore, it became clear (in context) from the video footage 15.11.2016 of the TV channel “Russia 1” about the meeting’s GDP with the leadership of the armed forces of Russia. Shoigu then said, “for the First time in the history of the Russian Navy… involved TAVKR “Admiral Kuznetsov”, and today the cruiser has started to work on the su-33″ (reference 10). Finally, in the same report (08:29) was shown prepared to sling high-explosive bomb FAB-500, which is ill-suited for “smart” SUV of the MiG-29K(UB), designed to control high-precision weapons like the KAB-500, KH-25, KH-29, KH-31, KH-35, KH-38 and maybe some more modern.

In addition, 17.11.2016 the official representative of Russian defense Ministry major General Igor Konashenkov said that the militants of the terrorist group “dzhebhat an-Nusra” suffered serious damage during a massive fire strike inTuesday (15.11). As said Konashenkov, the strike was a carrier-based fighter su-33 from the air group of the cruiser “Admiral Kuznetsov” (reference 11).

Finally, in the reports of the Central TV channels have talked about the use of weapons with laser-guided KH-29L, KAB-500L), which can use carriers with a simple red-dot sights for the issuance of pre – targeting when using ground target illumination. No heresy here, like, no − thing to put a rocket or drop a bomb in the right direction, and there she will be induced into the reflected from the target illumination. 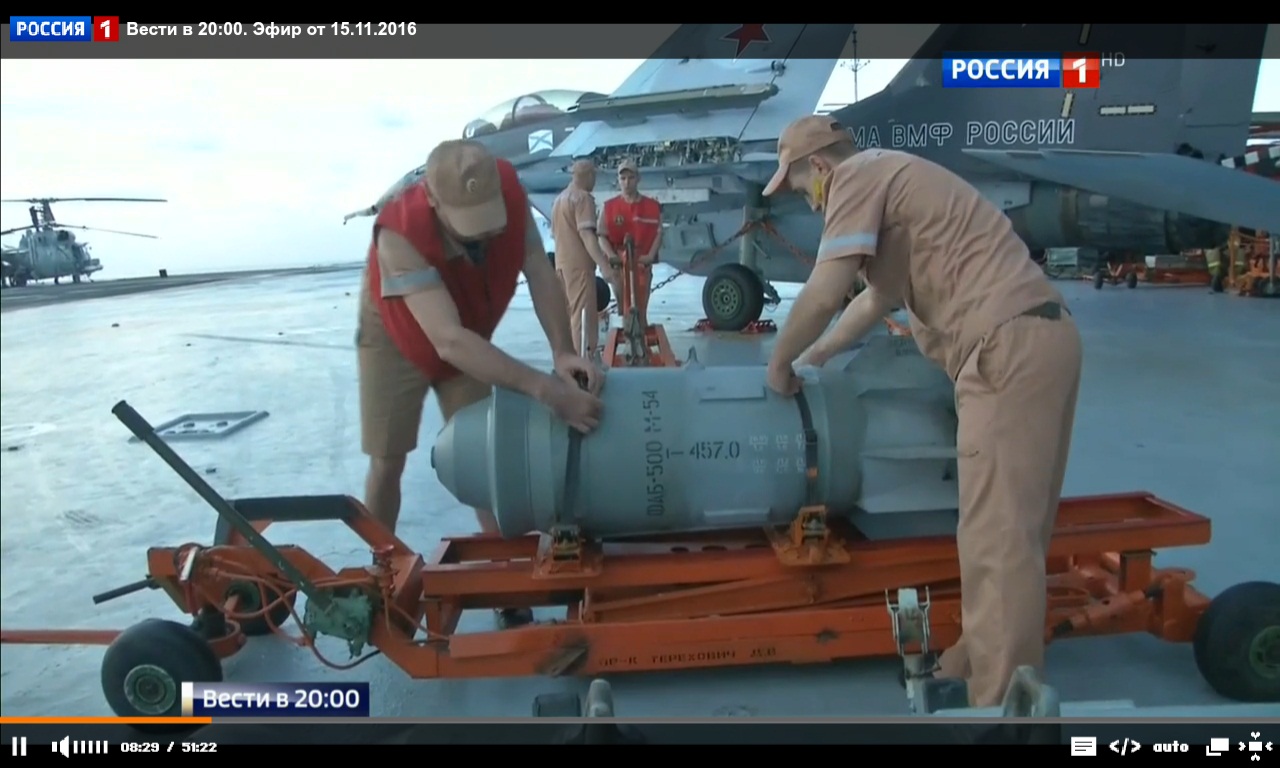 The loss of the first aircraft occurred in the following circumstances (in the version gazetasi): “Despite the relatively small difference in speed and much lower landing weight compared to su-33, MiG-29K is much more often tearing of the landing cables of the arrestor… It happened during flight operations on 13 November 2016. On that day the cruiser flew three MiG-29K… First fighter landed without comment. The second caught the second wire of the arresting gear, tore it and eventually caught only backup cable four.Torn second rope entangled in the third and made it impossible to use it when boarding the plane. Some time landing planes onthe aircraft carrier was in principle impossible. At this time, the glide path of decline was the third MiG-29K. Because command of an aircraft carrier it took some time to bring the wires of the arresting gear in order, the head of flights has given the command to the pilot of the third plane to go to the second round. While the aircraft was flying in the waiting area from him we lost both engines. In them, according to the preliminary version, has ceased to flow fuel… While at the wheel of the car was the most experienced pilot head of flight safety service of aviation of SF” (reference 12).

How much time it took to bring the arresting gear in the order it is not known. It is possible that the MiG-29K in the standby mode, a fully developed emergency fuel providing the re-landing (assume that during the execution of the flight task, the main fuel was depleted). In this case, we have the typical emergency caused by the failure of onboard equipment BCH-6.

On the one hand, it was just a coincidence on the other − with the arresting gear necessary to do something (to be made − don’t you worry). Most importantly, as correctly pointed Dmitry Peskov, in both cases, the pilots were still alive and healthy. Deck pilots is our main capital for heavy aircraft, and the aircraft… They have an excessive amount of − 20 su-33, and 23 MiG-29K(UB) (total of 43), while 11435 is maximum (in the hangar and on the deck) 36 cars (reference 13). Will survive.

Of interest is the material RIA Novosti concerning accidents in the U.S. Navy (14). It is, of course, needs revision and updating (as the jamming of the electric trigger “Vulcan-Phalanx”, followed by execution of the air group can not be attributed to flight accidents), but without it the article is good enough.

The composition of the air group

on the aircraft Data − from colleagues Polikarpoff with forums.airforce.ru (reference 15) and the author of the blog (in terms of confirming some b/h), on helicopters from charly015 with the filing of colleagues 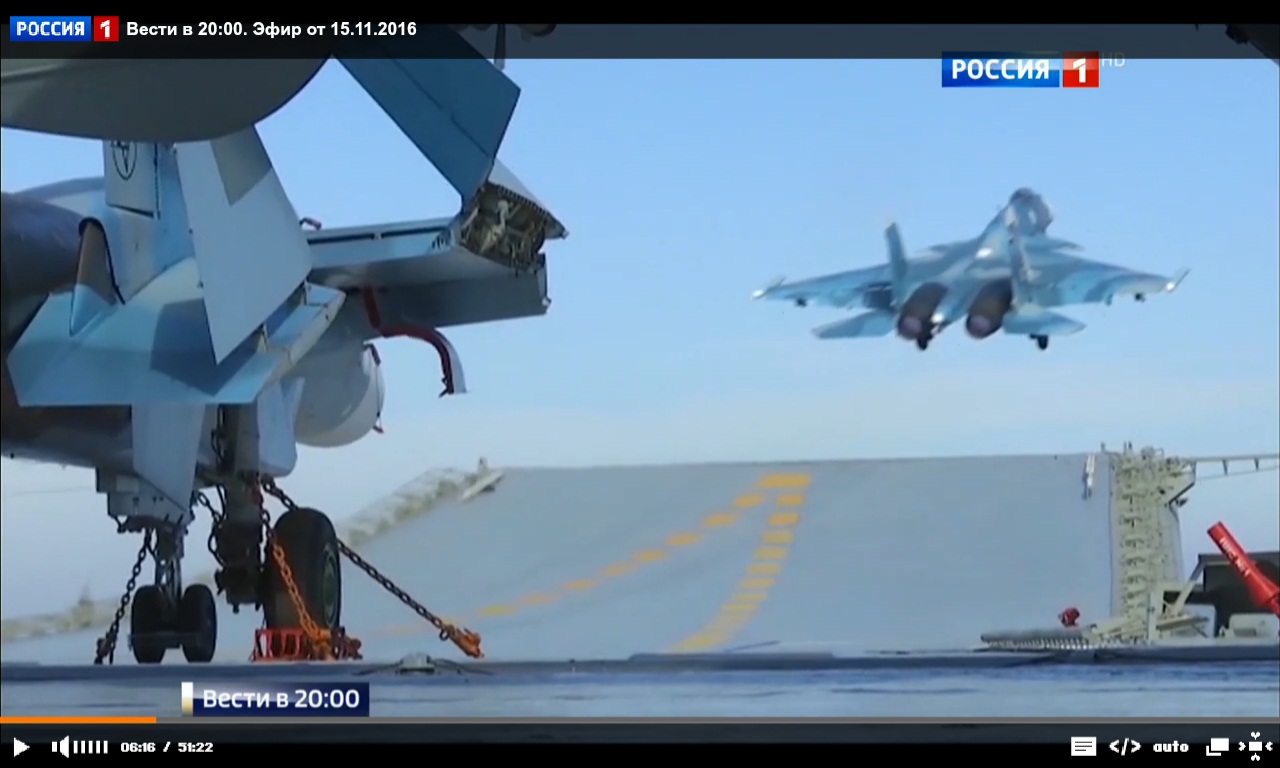 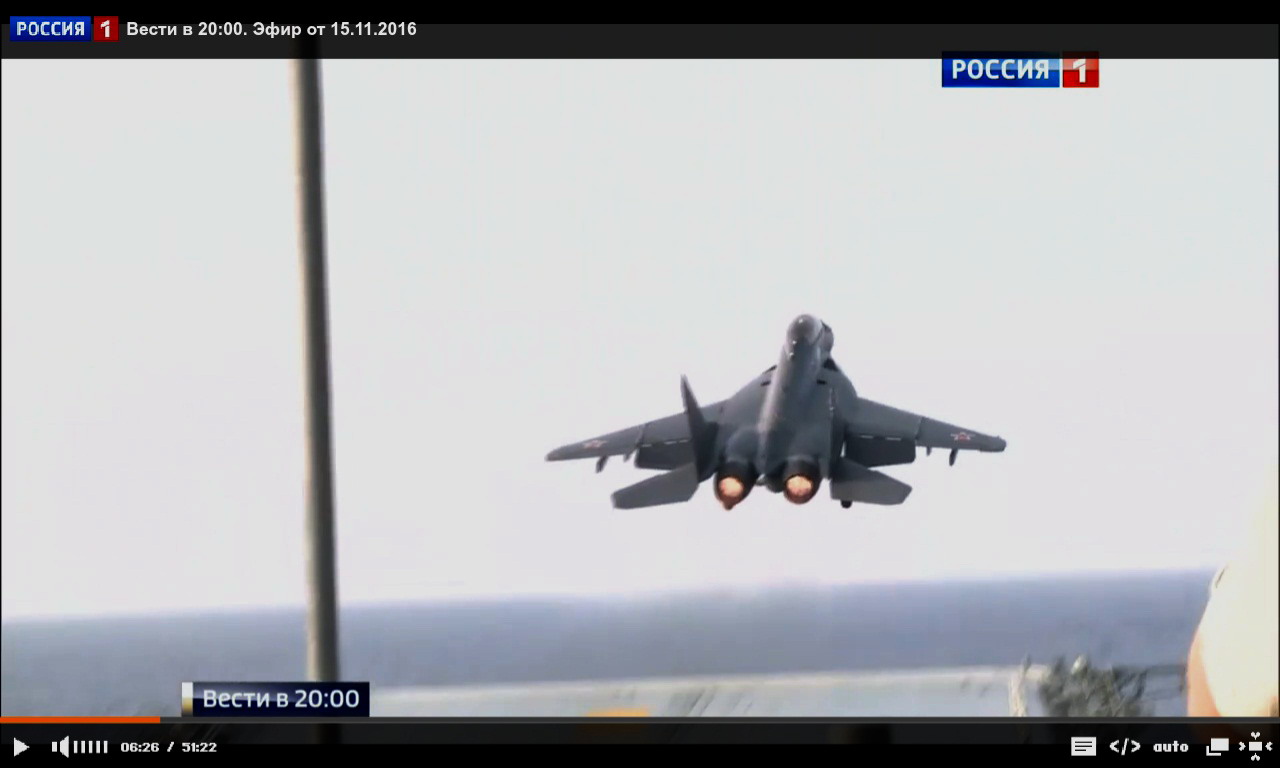 15.11.2016 when the planes and helicopters of the air group “Kuznetsov” began to work at the beach (info from the program “Vesti 20:00” TV channel “Russia 1”), they were not the only angels revenge for the atrocities of the Caliphate gang Syria. TFR “Admiral Grigorovich”, the head ship of PR. 11356 for the black sea fleet, was shot at least three 3M14 missile complex “Caliber-NK”. Simultaneously, there is an even more amazing event − a volley of BRAV complex “Bastion”, armed with a seemingly anti-ship missiles “Onyx” on ground targets.

It turns out in February I missed the message of the newspaper “Izvestia”, the publications of which are critical (at this time there to find fault with virtually anything), that “Bastion” learn to shoot on land due to additional units inthe guidance system, through which in addition to anti-ship we received and high-precision ground-based complex with a pointing accuracy of several meters (reference 16).

Indeed, our rocket scientists to work miracles (“Redoubt” − an unfortunate exception to the rule).

To sum up BS “Kuznetsova” even before it is in full swing. However, I am infinitely glad that military service was held, and the CAG reached Syria in such a representative composition (first since 2005). It is worth Recalling that us carriers rarely have escorted more than 3-4 cruisers and destroyers, but where their “Ticonderoga” and “the Burkes” to “Peter the Great” (and that’s before the upgrade, during which it needs to get 80 “Onyx” and “Caliber” instead of 20 “Granite”). And elegant long-range BOD with a range of plourac’h in 50 km?! It is a pity that CAG is one, but this is easily remedied.

As for the role of CV in the Battle for Syria, then, as correctly noted by colleague Alexey Ermakov, progress in Aleppo began after his arrival in theatre (reference 17). It is possible that we simply did not have enough aircraft to prevent the supply and attempts to release the boiler Aleppo, and to increase the grouping in the usual way (via Iran and Iraq) was not with his hands (brought − brought so). The arrival by sea of a significant number of attack aircraft (two squadrons) in this the event became an exit of a difficult situation.

The main feature of this BS, without a doubt, is the fact that Russia finally got a multi-purpose aircraft carrier, the main and probably the only disadvantage is the lack of AWACS aircraft, which, however, can compensate for long-range air patrol su-33 − 2 hours of patrolling at a distance of 250 km from the ship (Fomin , “su-33. The ship epic, 2003, p. 89) with the detection range of the Aug enemy of 350 km (reference 18), for a total of 600 km, which is very close to the capabilities of the “HOKA”.■ 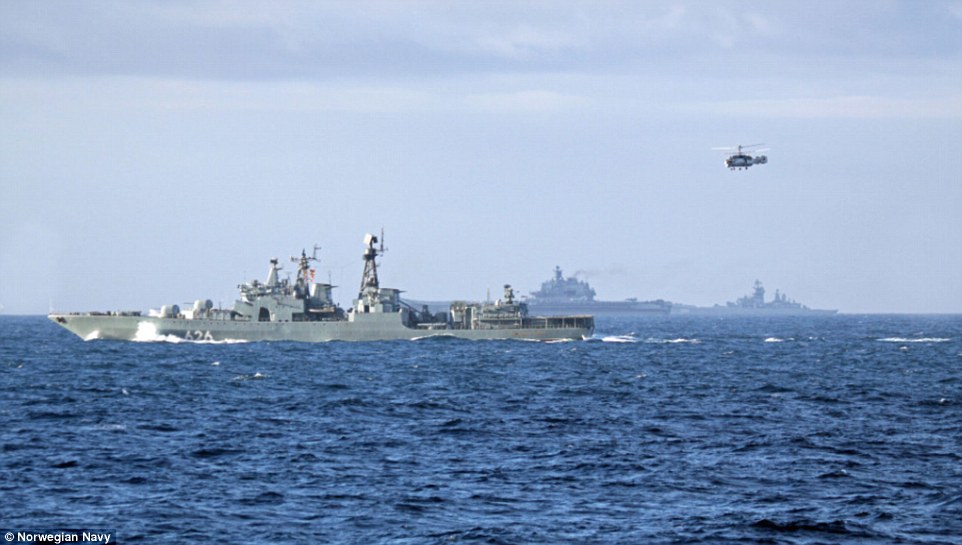 7.Of the ship aircraft carrier group on the way to the English channel (not visible “Severomorsk”), 20.10.2016 (photo of the Norwegian Navy with dailymail.co.uk) 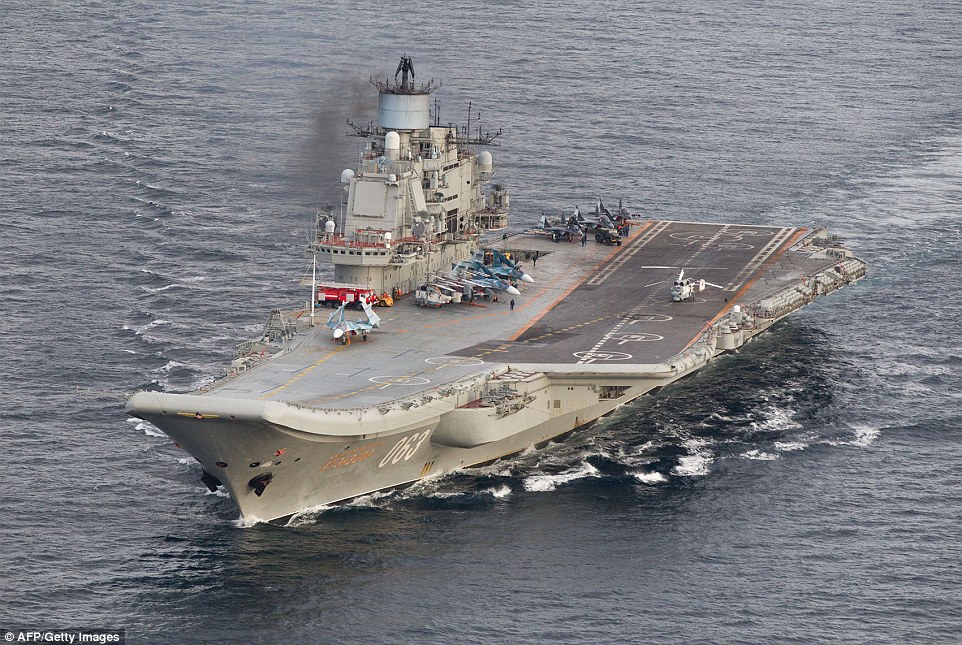 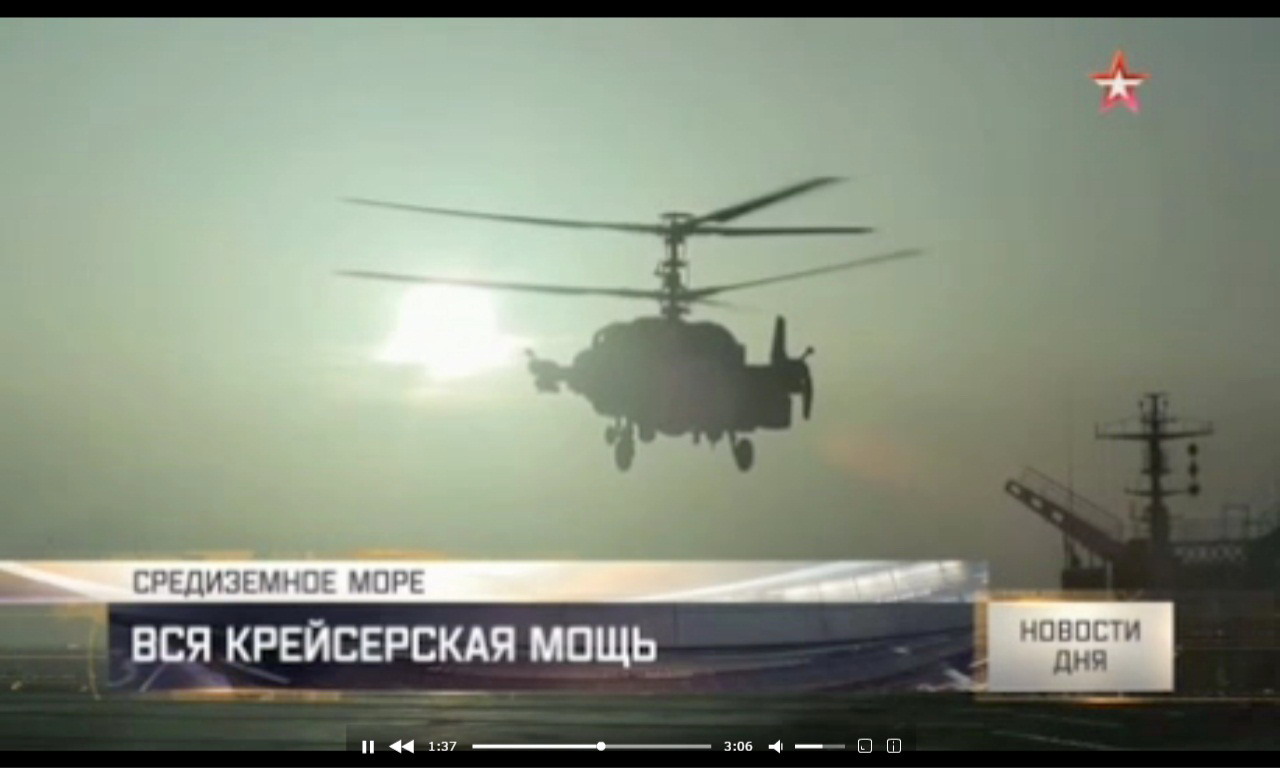 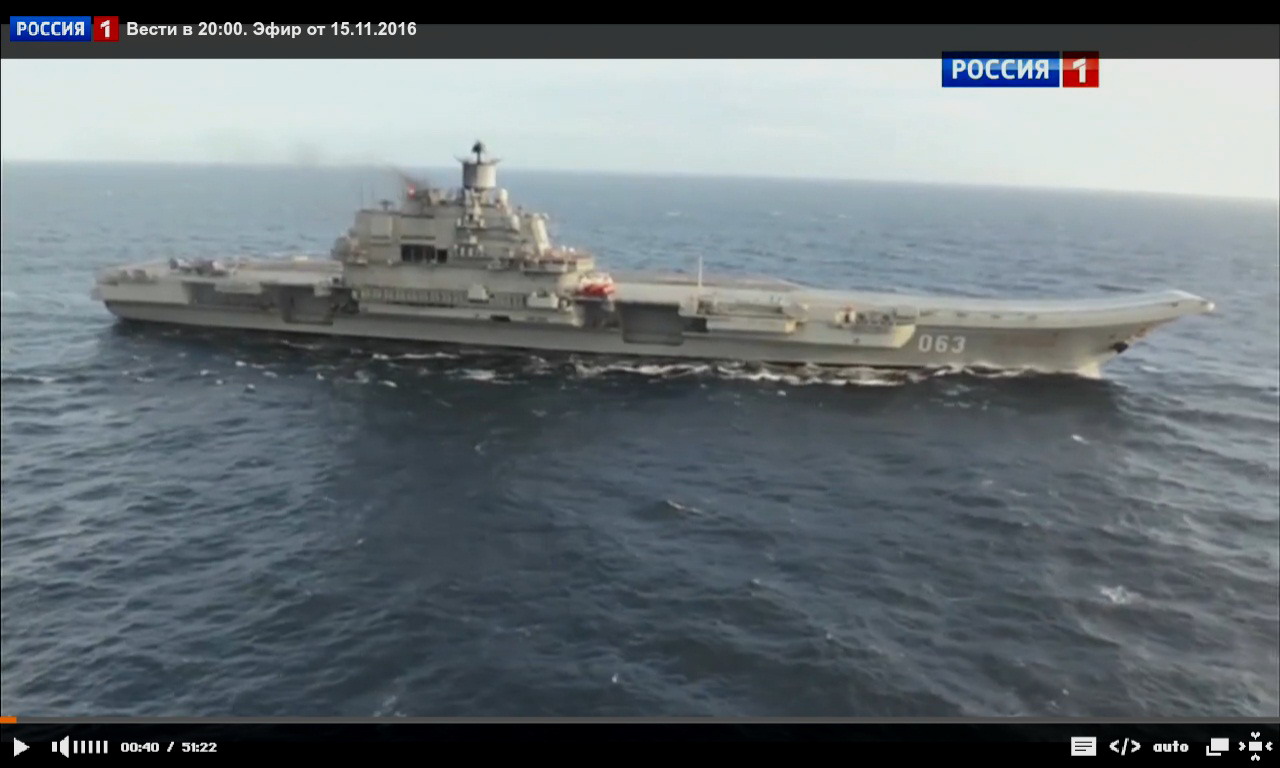 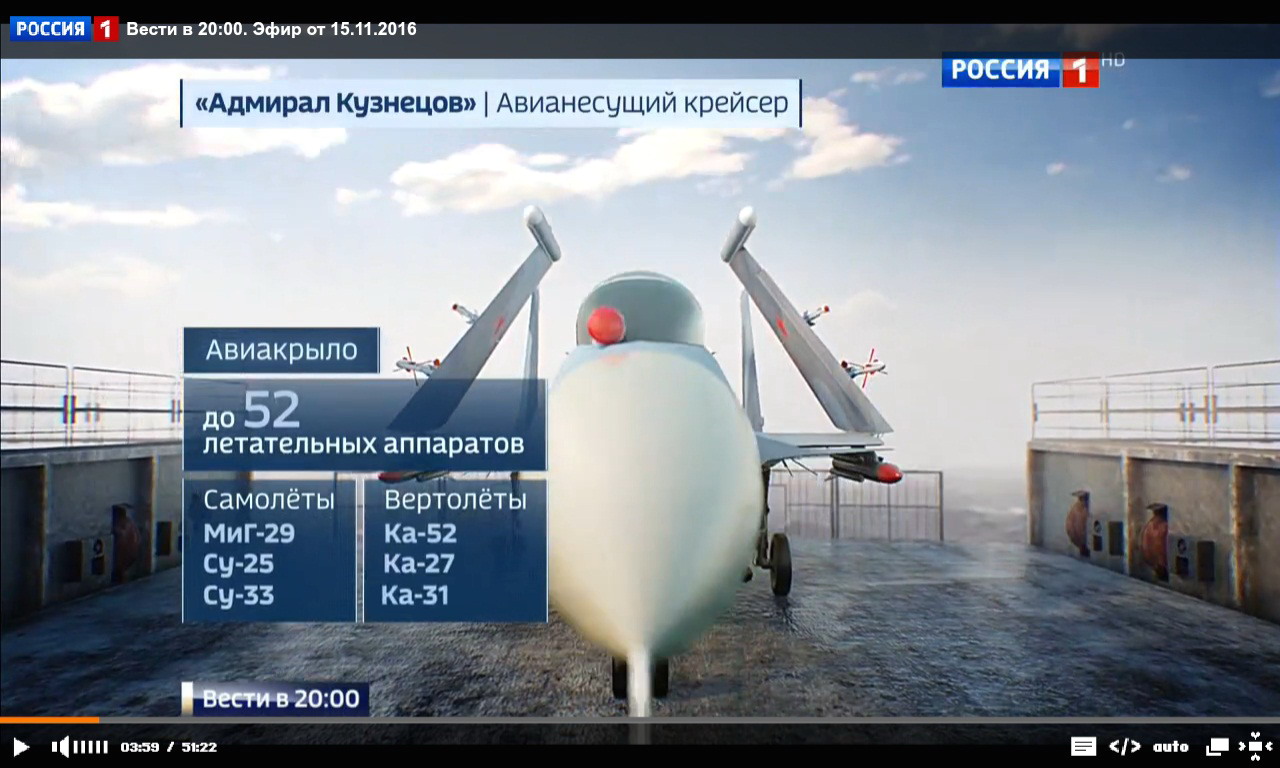 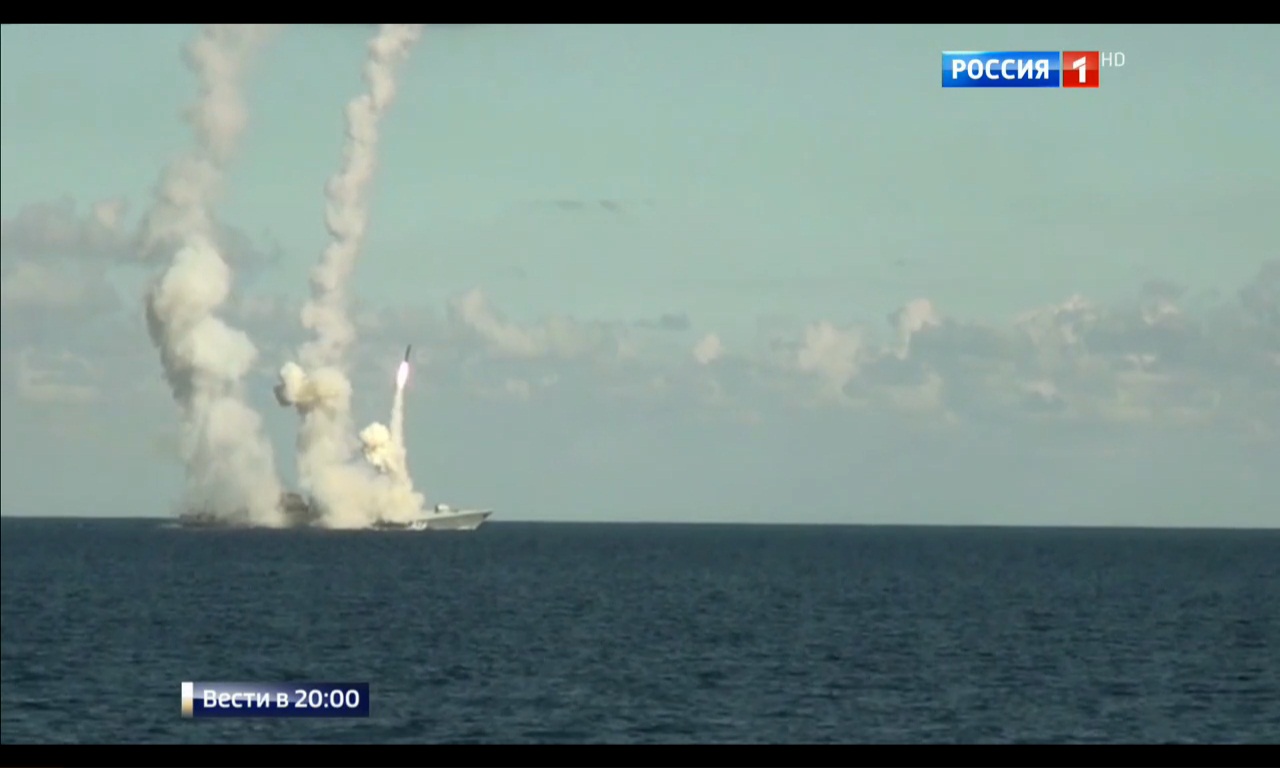 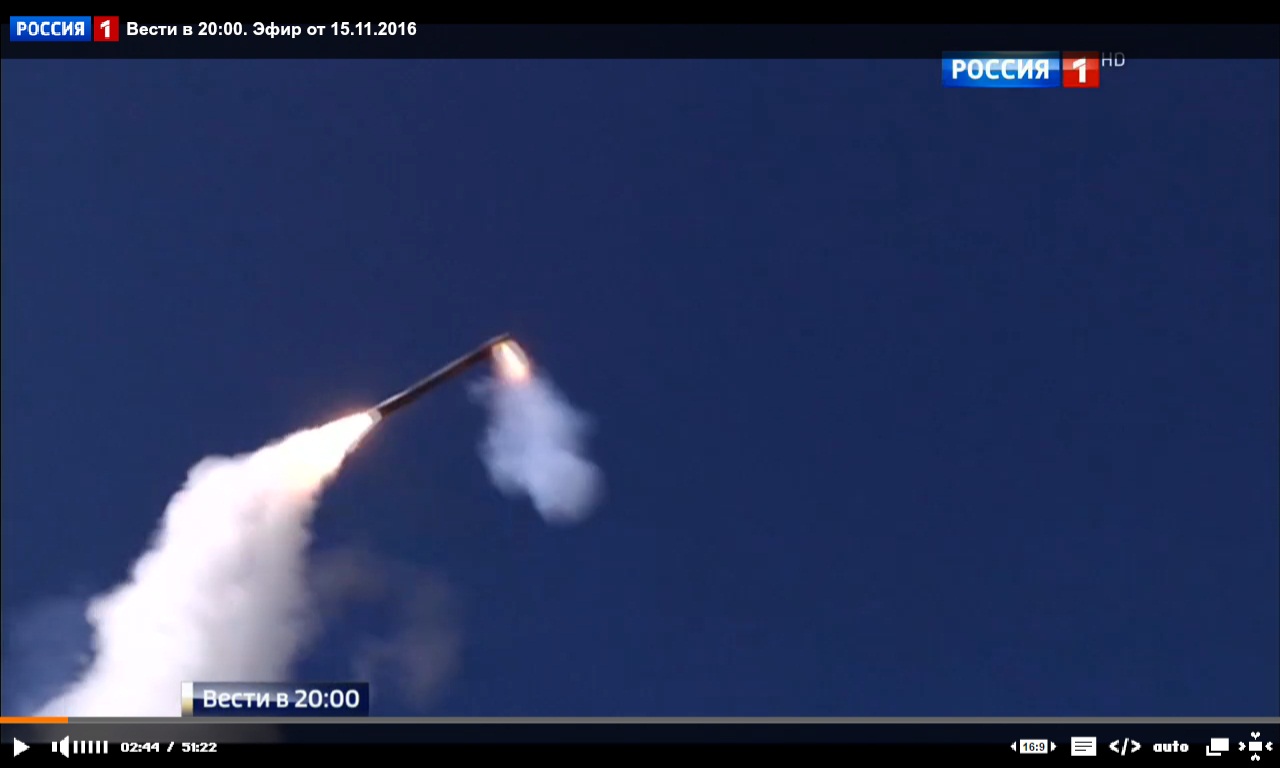 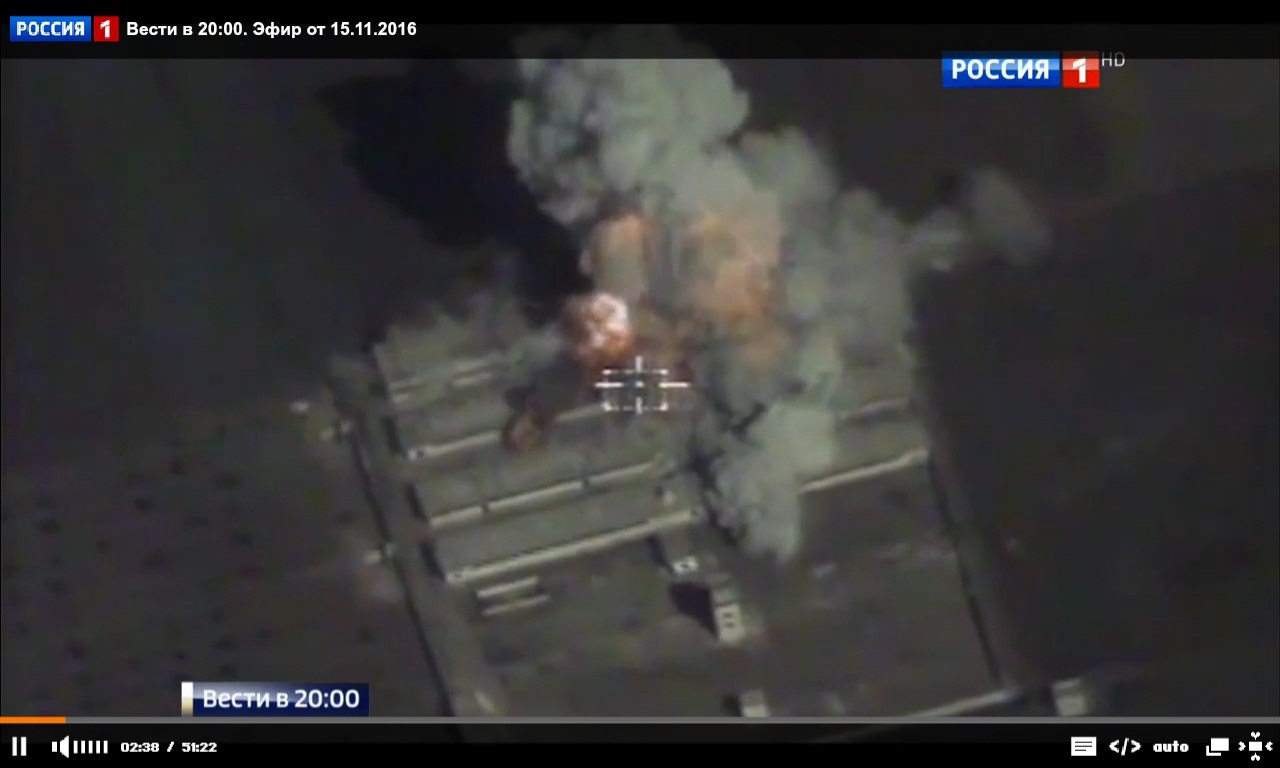