Trump officially unveiled the next Secretary of state, who will replace Kerry and whose name with regard to Syria and Ukraine, we will now hear very often.

The US President-elect Donald trump has appointed the head of ExxonMobil Rex Tillerson as its new Secretary. About it reports Reuters with reference to the policy statement.
“He is a man, powerfully and clearly defending American interests, and he will be able to correct the mistakes of those years, when foreign policy was going the wrong way and only weakened the security of America and its role in the international arena”, — said the future President of the United States.

Team member trump that a Republican has listened to the recommendations of former secretaries of state James Baker and Condoleezza rice, and former head of the Pentagon Robert gates.

In Exxon Mobil Tillerson came immediately after graduation and went through the whole career ladder from simple engineer to head of the Corporation. He is known for active measures with the Russian company “Rosneft” according to some, direct negotiations between Tillerson and Russian President Vladimir Putin facilitated the conclusion of agreements on the implementation of several major projects (in particular, drilling in the Russian Arctic shelf). He was awarded the Russian order of Friendship. Tillerson does not consider sanctions against Moscow an efficient tool and supports the reduction of the role of restrictive measures in American foreign policy. Tillerson’s candidacy should be approved by the Senate. The assurances of the lawmakers, although the process will not be easy — many of them are concerned about “ties with Russia.” 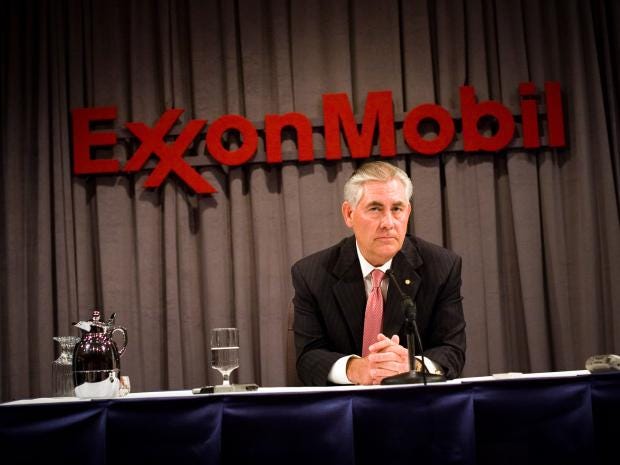 Rex Tillerson born March 23, 1952 in Wichita falls, Texas. Grew up in Oklahoma and Texas, the major oil and gas producing States. Was an active member of the boy scouts, in 1965 he received the title of Eagle Scout is the highest achievement that has been made only about 4% of all boy scouts. From 2010 to 2012 was the head of the American Association of boy scouts (“boy Scouts of America”), and then remained on the Executive Council. Contributed to the lifting of the ban membership of the boy scouts to homosexuals. In 1970 he graduated from high school in Huntsville, Texas.In 1975 he graduated from the University of Texas at Austin, where he studied engineering.

Immediately he began his career at Exxon in the fields, by the mid-1980s, he headed the business development service in the gas Department of the Corporation. In 1998, he became Vice President of Exxon Ventures and President of Exxon Neftegas Limited, which was responsible for Exxon business in Russia and the Caspian sea. In 1999 the merger of Exxon and Mobil, he was appointed Executive Vice President of ExxonMobil Development. In 2004 he became President and Director of ExxonMobil.From January 1, 2006, Tillerson was elected Chairman and chief Executive officer (CEO), following the retirement of Lee Raymond. In 2011, ExxonMobil signed a contract for oil production in Iraqi Kurdistan, which was a violation of the laws of Iraq and also irritated Washington.

Tillerson sought cancellation of the existing a few decades of a ban on the export of crude oil from the United States, as well as lifting restrictions on the development of projects to export liquefied natural gas. Under Tillerson’s leadership Exxon received in 2014, the net profit in the amount of $ 34 billion and paid $ 80 billion in taxes. In 2011, on behalf of ExxonMobil, Tillerson signed an agreement with Russia to drill in the Arctic. Although the company started drilling in the Kara sea in the summer of 2014, sanctions against Russia during the Ukrainian crisis stopped the project in September of the same year.Assessment of the site OilPrice.com the loss of ExxonMobil due to sanctions against Russia amounted to at least a billion dollars: the company was forced to withdraw from the joint with “Rosneft” projects in Sakhalin, the Kara sea and Siberia.

Tillerson serves on the Board of Trustees of the Center for strategic and international studies. Is a member of the Executive Committee of the American petroleum Institute and a member of the Society of petroleum engineers (SPE). Is part of the National petroleum Council, the Business roundtable, is a member of the Business Council, an honorary Trustee of the business Council for international understanding and a member of the Emergency Committee on trade in the United States. In 2013 he was elected a member of the National Academy of engineering.Forbes by the end of 2015 Tillerson was placed on the 25-th place in the ranking of the most influential people in the world (at the end of 2014, he has occupied 20-e a place). In 2015, Tillerson earned $ 27.2 million. He also owns stock in the amount of 218 million.

PS. Tillerson of course the preferable option for Russia than Romney, who for a time promoted to the post of Secretary of state Republican establishment.