A young man in a white helmet with a characteristic yellow-and-blue mark on the sleeve four hours digging in the ruins of a destroyed building in Idlib province in the North-East of Syria. Finally, he sees what he’s looking for a baby. He carries the baby over to the ambulance as if it was his daughter. So the Western media is portraying volunteers of the “Syrian civil defense”, also known as “White helmets”. But what is the reality?It is no secret that since the beginning of the Syrian crisis in 2011, the country has established dozens of non-governmental organizations. As a rule, these organizations have beautiful names, and they advocate for the rights and freedoms of the Syrians, while providing some humanitarian aid. In 2012, a list of these organizations is supplemented with the “Syrian civil defense” (CDF). It was founded by former British intelligence officer and private is a specialist in the field of security , James Le Mesure (James Le Mesurier), who participated in various conflicts around the world, including Iraq, Lebanon and Palestine.

For several years the “Syrian civil defense” was transformed from NGO structure with its own uniform, symbols and even vehicles. Now CDF 119 centers across Syria — in Aleppo, Idlib, Latakia, HOMS, Hama, Damascus. In 2016 was even an attempt to nominate White helmets for the Nobel peace prize. And few remember that her volunteers showed up only in the territories captured by the opposition, and since then do not allow to representatives of the International red Crescent and red cross*.

“Helmets” claim that their organization is an independent humanitarian NGO, formally does not depend on any political party or military group. However, the “Helmets” are getting huge donations from different governments — the United Kingdom, Germany, Denmark and Holland. But their biggest donor — the us Agency for international development (US Agency for International Development, USAID), which funded various NGOs around the world. In April 2016 the representative of US state Department mark Toner confirmed that from 2013, the Agency provided a “Helmets”, at least $ 23 million.

It is clear that receiving such donations, “Syrian civil defense” shall promote the interests of those countries that are investing in it. A striking example of this is the attack near Aleppo on a humanitarian convoy of the UN on 19 September. Volunteers, “White helmets” “accidentally” turned on the spot and was the first who reported about the attack and immediately blamed the Syrian and Russian aircraft. Allegedly, on the spot, the volunteers found some fragments of bombs and saw the Syrian helicopters.This information then quoted the London-based Syrian monitoring centre for human rights**. And then the US authorities have made their conclusions, based on the so-called report of the Syrian NGOs.

Interesting and unusual in the fact that the humanitarian activists were on the territory controlled by the terrorist group al-Nusra Dzhebhat***. But if we look deeper into all the information, all will become clear. So, Vanessa Gets British expert on the Middle East, said that the White helmets form the environment necessary for military intervention in Syria by the US and its allies, as well as collaborate with various terrorist groups. According to Beale, CDF operates in the territories controlled by al-Nusra Dzhebhat, and not simply ignores the crimes committed by terrorists, but also doing everything that media to shape a positive image of these thugs.

Another evidence of a connection “Helmets” with terrorists is the fact that on April 20, 2016, the United States has denied an entry visa to the head of the organization to Raed Saleh(Raed Saleh), when he went to receive an award from InterAction, an Alliance uniting Agency for humanitarian assistance. According to the official version, at the time of entry the validity of his visa expired. However, according to the New York Times, he was identified as a person suspected of terrorist activities. Moreover, many activists of the “White helmets” are members of armed groups. There is abundant evidence that they are sympathetic to not just the opposition, but it was terrorists.”Helmets” with a passion to share photos and comments in social networks Twitter and Facebook, showing who is working in the so-called “Syrian civil defense”.

It becomes clear that “White helmets” this is not a humanitarian organization, and a cover, which is used to support militants of different terrorist groups. In addition, the “Helmets” are used to distribute the necessary false information. Activists of the “Civil defense” constantly post on their Twitter accounts pictures of hospitals, schools and mosques, which, allegedly, was bombed by the Syrian air force and its allies. After that comes the turn of the Syrian center for monitoring the observance of human rights, and then the Western media.

But experienced journalists have questioned the accuracy of the information with the White helmets. An independent Italian journalist Marinella Correggia, (Marinella Correggia) found that no medical organization has never declared that its structure was hit during the bombing of the Syrian or the Russian air force. No building damaged or destroyed as a result of their bombing, did not have the necessary identification marks. Italian researchers came to the conclusion that these buildings, which were close to the militant groups were field hospitals and had no connection with any state healthcare system or with international organizations such as the red cross.It is obvious that “Syrian civil defense” does not pursue the goals that its leaders say. “Helmets” are not just providing humanitarian aid; they cooperate with terrorist groups.

It is clear that also provide the “Helmets” information about the attack on a UN convoy near Aleppo and other crimes allegedly committed by the Syrian air force and their allies is highly questionable. That investigation, which plans to start the UN should not be based on claims “Helmets”, and the objective information provided by all parties to the conflict. Thus, to create a Western media image of a lifeguard wearing a white helmet, vanishes and manifests the reality — uniform humanitarian organizations are people sympathetic to the terrorists.

is A heavy sleeper Sadykov from Makeyevka. Sonya 6 years. October 27, 2016 it was wounded during the shelling of his native city by Ukrainian fascists. Unlike the boy from Aleppo or repeatedly rescuing girls from Idlib, it will not take reports in the Western media, it won’t make a symbol of the brutality of war and no “white helmets” will not attend to her fate. 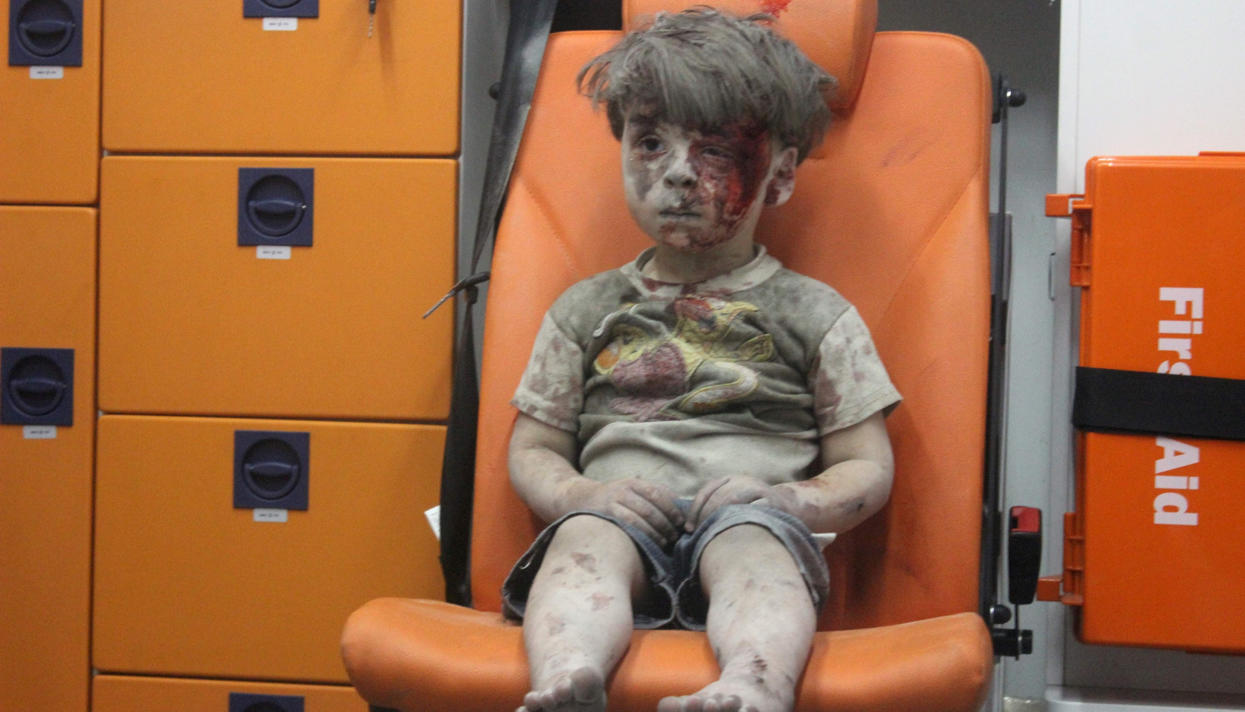 All children are equal but some are more equal than others. But below the adults.

The structure of the “white helmets” and “humanitarian organizations” and their activities have long been exposed, as well as the participation of their representatives in the fighting on the side of the militants of terrorist organizations and in the construction of the “horrors of war”.

Learn how to draw shrapnel wounds of the children properly.

Well, we are still in Chechnya, remember that every self-respecting human rights should actively work with the militants and broadcast on “the crimes of the regime”.