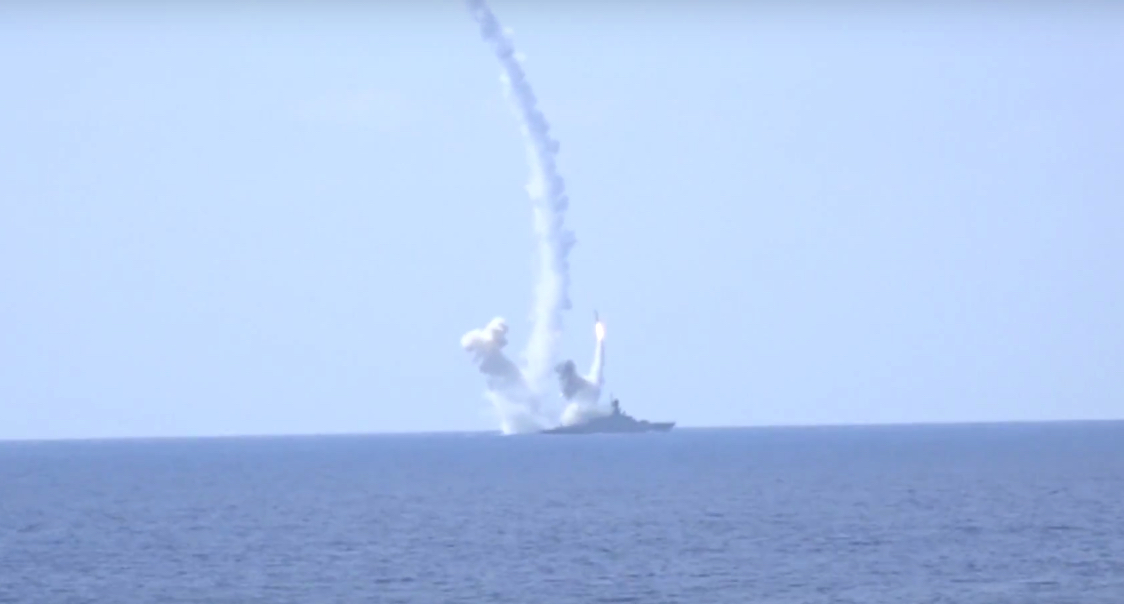 On Aug. 19, at around 10:55LT in the morning, the Zeliony Dol and Serpukhov small-sized missile ships of the Black Sea Fleet, sailing in the eastern Mediterranean Sea, performed 3 launches of Kalibr cruise missiles  against facilities of the Jabhat al-Nusra terrorist grouping in Syria.

According to the information released by the Russian MoD, the cruise missiles targeted a command center and a terrorist base near the Dar-Taaza inhabited area as well as a plant manufacturing mortar munitions and a large depot with armament, in the Aleppo province.

The data collected by the Russians “confirmed the elimination of the planned targets.”

The Russian Defence Ministry published some footage of the launches, of the destruction of their targets and the subsequent Battle Damage Assessment (filmed from a UAV – Unmanned Aerial Vehicle) on their Youtube channel.

It was not the first time the Russian Navy hit targets in Syria from the Med: in December 2015, a Russian improved Kilo-class Rostov-on-Don submarine launched the Kalibr-PL cruise missile against targets in the area of Raqqa.

The Kalibr-PL is a submarine-variant of the 3M14TE Kalibr-NK cruise missile with a maximum range of 2,600 km, fired by the Russian small-sized missile ships earlier today.

Anyway, the cruise missiles attack shows the Russians continue to pound targets in Syria from different directions and with different weapons systems as it comes few days after at least four Tu-22M3 Backfire bombers conducted their first air strike in Syria departing from their temporary deployment airfield at Hamedan airbase in Iran.

Noteworthy, it seems that the deployment of the Backifres to Iran has already finished: the more recent imagery shows only four Su-34 Fullback bombers on the ground at the Iranian base.