Briefly about the events in Kazakhstan, Armenia and Turkey. 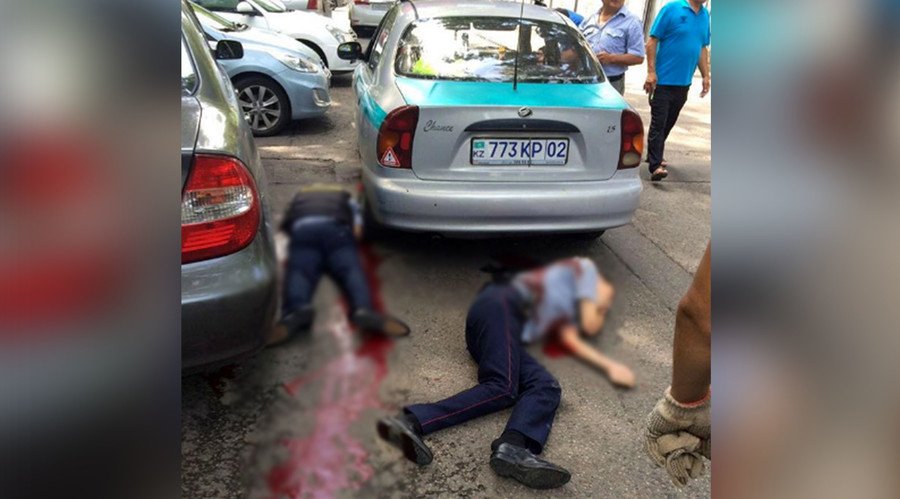 The anti-terrorist operation is held in Alma-ATA after an armed attack by gunmen in the city centre.
The shooting was recorded in several districts of Alma-ATA. According to preliminary data, three police officers died, at least seven injured. Killed one civilian.
The Department of internal Affairs of the city introduced “red”, the highest level of terrorist threat. One of the attackers detained, the other is wanted. The city introduced the plan “Interception”.
The National security Committee of Kazakhstan (KNB) announced that the attack was carried out on the building of the Almaty regional Department of the police and the local Department of the CBN.

According to the interior Ministry of Kazakhstan, at about 11.00 (08.00 GMT) the guard police of Alatau district office of internal Affairs was injured by a criminal, that after the shot was the weapon of a police officer and fled.
“In pursuit of them (criminal — ed.) was used the stolen weapon against the pursuing police crew “Buran”, with the result that two members of the patrol crew were shot and wounded”, — stated in the message Department. According to the interior Ministry, the suspect was wounded and detained by the police in the area of JSC “Kazakhconcert”. Found on his person. During the arrest, shot and wounded two police officers.“According to preliminary data, the detainee, 27-year-old previously convicted born in the Kyzylorda region is suspected of committing the murder of a woman over the weekend”, — stated in the message. The city introduced operational plan “Siren”, all the police focused on the search of the detainee accomplice of the criminal.

At least seven wounded policemen are in intensive care, hospital emergency care under armed guard. Local media, citing emergency hospital reported that the exact number of casualties is still unknown, because they continue to come to the hospital.
“The city of Alma-ATA introduced a special plan “Interception”. There are dead among the police. One of the attackers arrested, one is wanted”, — stated in the message of Alma-ATA city staff.
The interior Ministry of Kazakhstan confirmed that the attack killed three police officers and one civilian.
“Unfortunately, the offender previously has been carried out attempt of capture of the car of the resident, with the result that the driver was wounded and died”, — reported in Department.
The Plan “Interception” 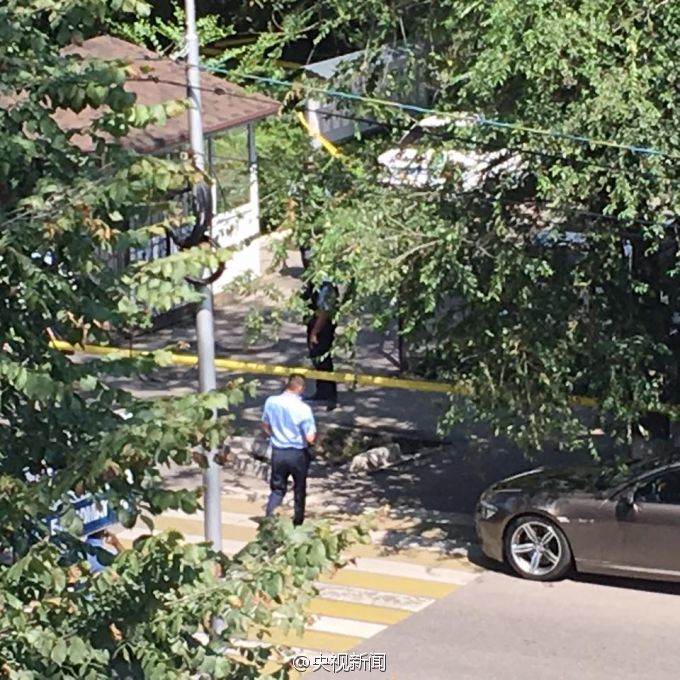 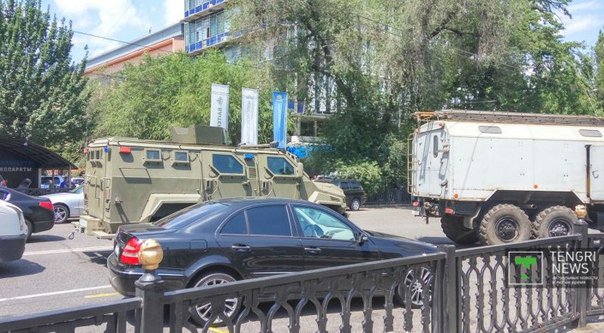 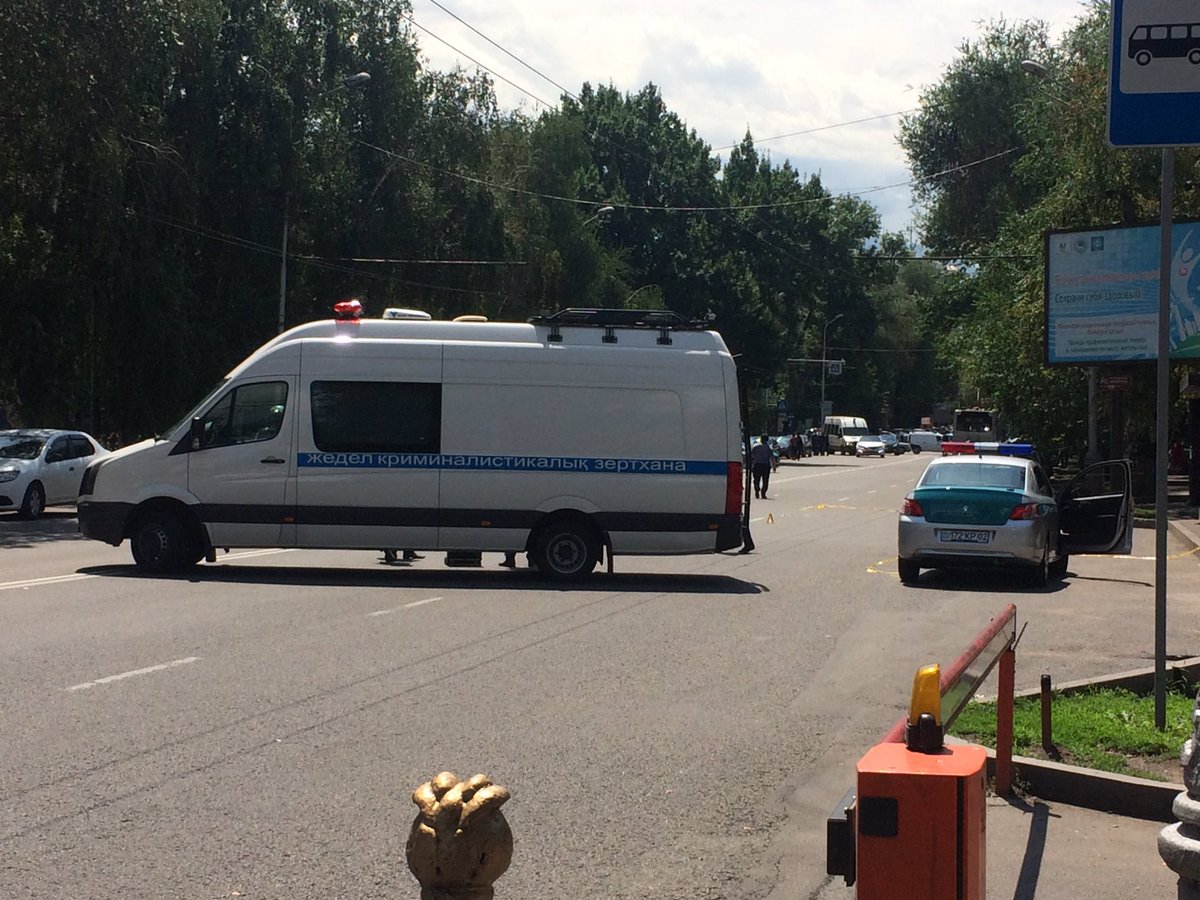 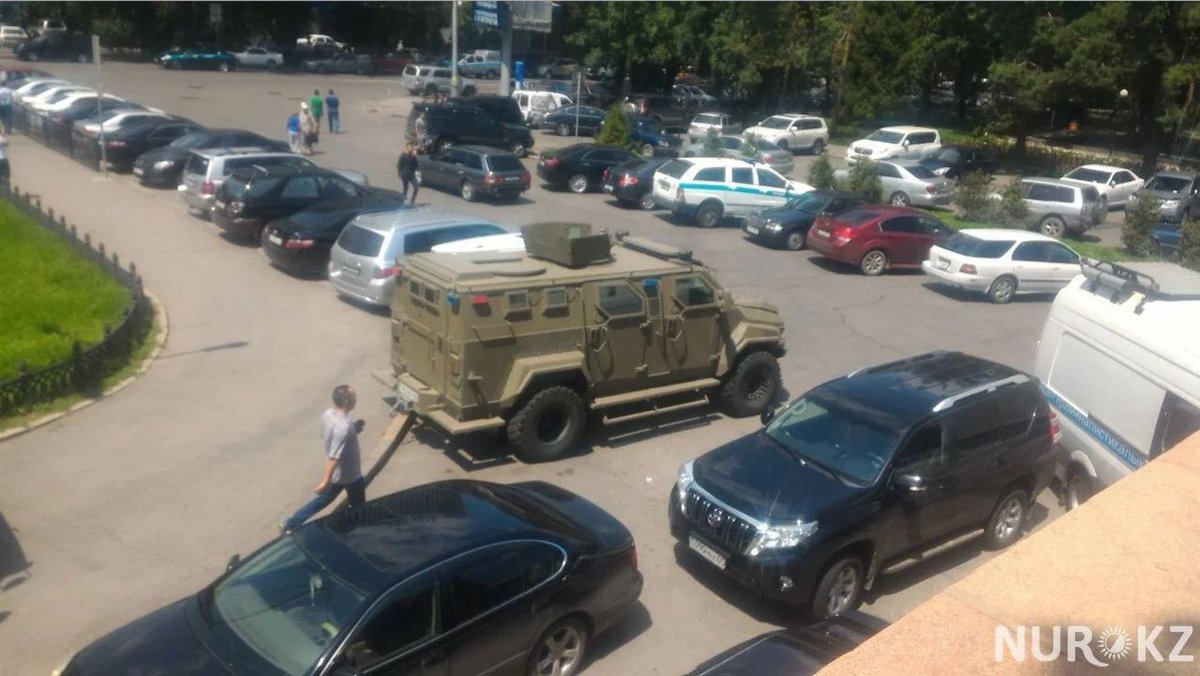 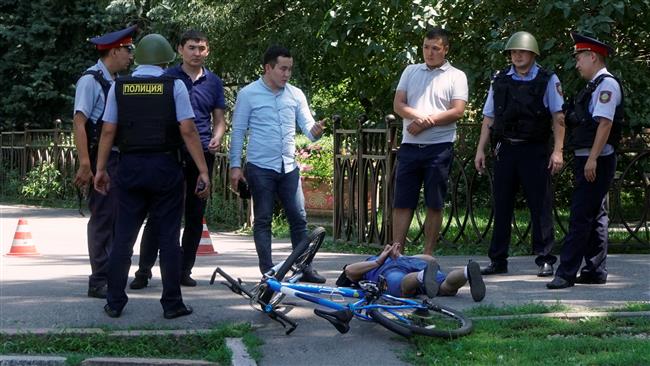 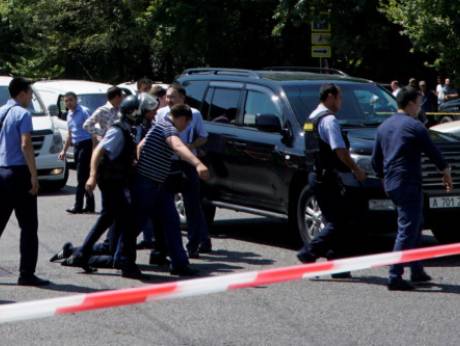 As to the coup attempt is ” not really, although the speed of the spread of rumors on this account is quite remarkable. On the other hand, this news from Kazakhstan appear more and more often, which may be a reflection of trends that Kazakhstan consistently rocking. There certainly is more to it than just crime, otherwise I would not have sent troops https://twitter.com/OnlineMagazin/status/754969357374062592
Here is to wait for more information.

In Yerevan released one of the abducted policemen. An armed group seized the police station agreed to release one of the guards having health problems.
The representative of the armed group Varuzhan Avetisyan told reporters that his colleagues contacted Zhirayr Sevillana leader of the opposition “Founding Parliament” (supporters of this organization are involved in the capture). Sefilyan allowed to release one hostage. “We let the police, who had health problems. He’s allergic”, — quotes “Interfax” of a word trial.
Avetisyan stressed that the demands of the invaders has not changed, and in the case of assault police they are ready to resist.
The group seized on 17 July, the police Department, demands to release Sefilyan, who is currently under arrest on charges of illegal acquisition of weapons. Also among the demands is the resignation of the President of Armenia Serzh Sargsyan and the formation of a new government.
When you capture the building, one policeman was killed and four were injured. Held hostage by the invaders remain, in particular, the Deputy head of the Armenian police major-General Vardan Yeghiazaryan and Deputy chief of Yerevan police, Colonel Valeri Osipyan. On the morning of 18 July to the place of events there arrived the chief of the Armenian police Vladimir Gasparyan and Director of the national security Service, Georgi kutoyan was

Since yesterday in Armenia arrested more than 200 people on suspicion of involvement in the activities of the “Constituent Parliament”. Arrests are continuing actively today, on the 12th day seized the police station in Yerevan refuse to give up. Authorities continue to negotiate to free the hostages peacefully and to avoid bloodshed. Any chance to keep building from rebels there. The question is only the scale of destruction and number of victims.
It is obvious that in this way the local Armenian “constituent Assembly” will be difficult to achieve displacement of the Armenian President and government, as even elementary human shield of supporters of the coup, they are unable to take to the streets to create a media image and associate a part of the power resources of the government rallies-protest activity. 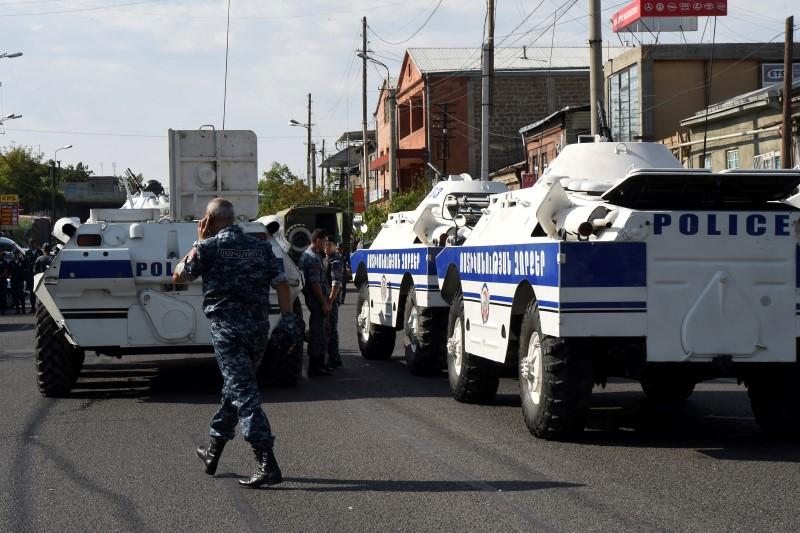 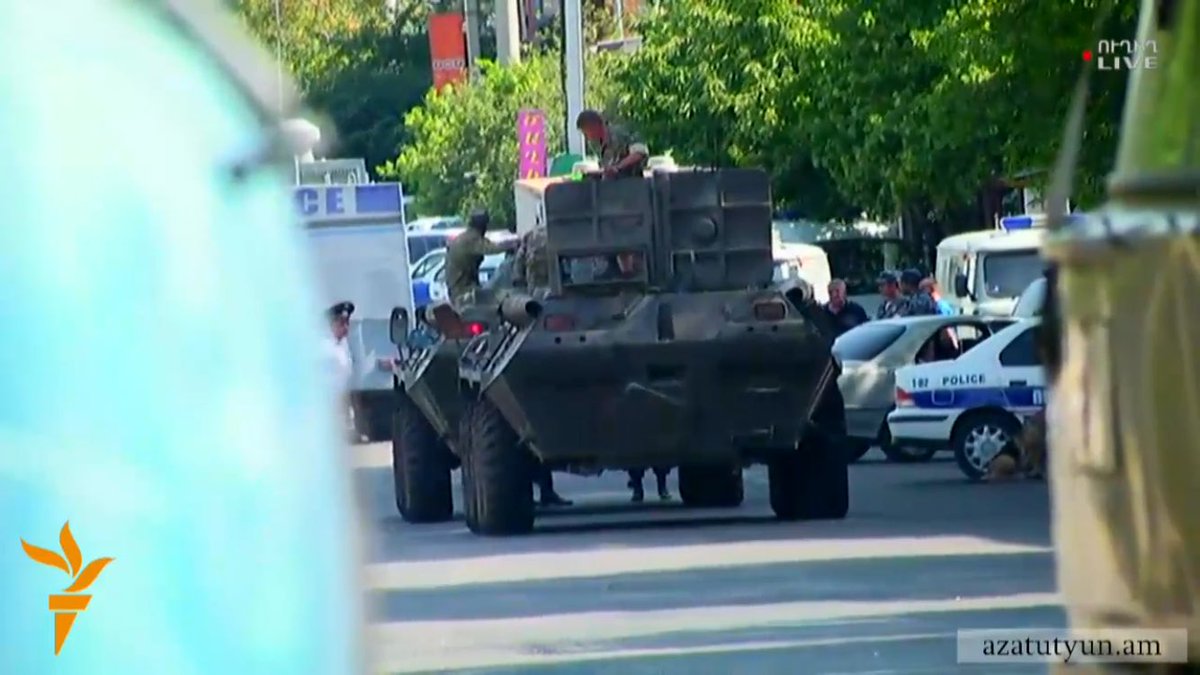 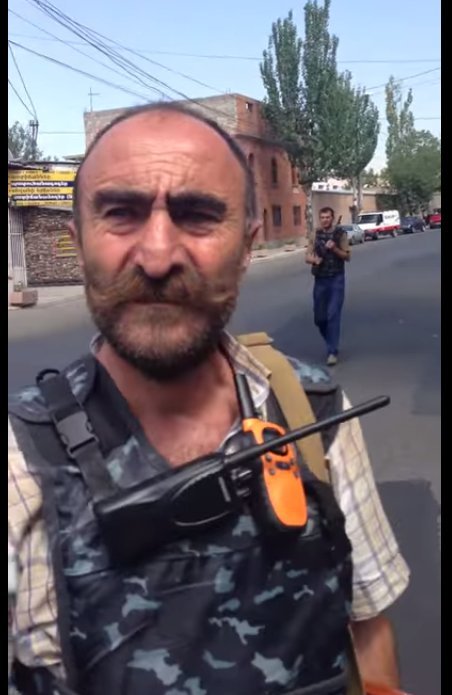 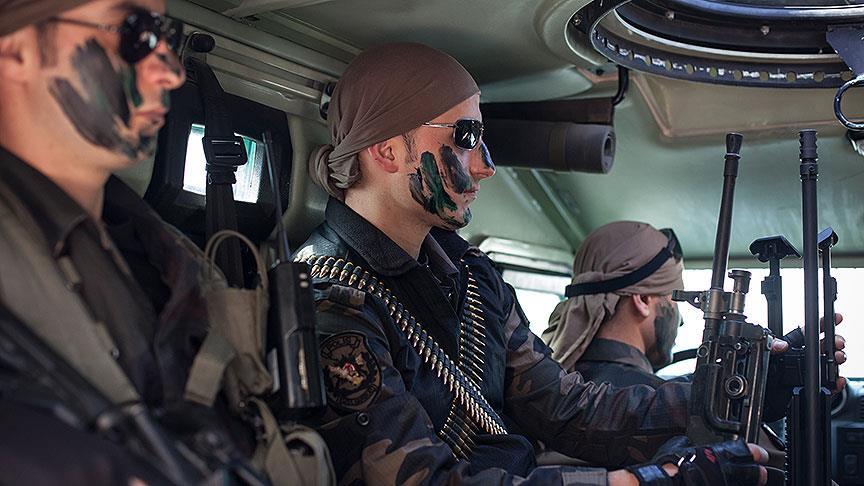 News from Turkey continues to “delight” the intensity of the events.

1. From the ranks of the police fired more than 8,000 police officers for communication with conspirators https://lenta.ru/news/2016/07/18/police_cleanised/ With the military and judges, the total number of those arrested and suspended is already more than 18 000 people.
2. From the work suspended, 30 governors and more than 300 officials of local governments. http://www.trend.az/world/turkey/2559321.html Closed, the Bank associated with the Gulen https://lenta.ru/news/2016/07/18/gulenbank/
3. Soldiers associated with the conspirators today opened fire at the Palace of Justice in Ankara and was either wounded, or killed. We must understand that catching persons associated with the conspiracy will also be accompanied by occasional clashes.
4. Authorities announced that over Istanbul will shoot down unidentified helicopters. It was a reaction to the fact that besides the downed helicopters in the hands of the rebels were still a few combat vehicles, which are still not found.
5. The head of the General staff Hulusi Akar, Ozturk, who announced his accomplice in the coup claims that he was arrested and tortured, but he refused to support the coup.
6. Completed operation air force base Konya, arrested more than 10 people. The arrests were made and the air force Academy near Ataturk airport.
7. Against this background, resumed activity of Kurds from the Kurdistan workers ‘ Party, from mortars were fired at a police station in the province of van, a few soldiers were injured.

Plus the coup in Turkey in the cartoon. 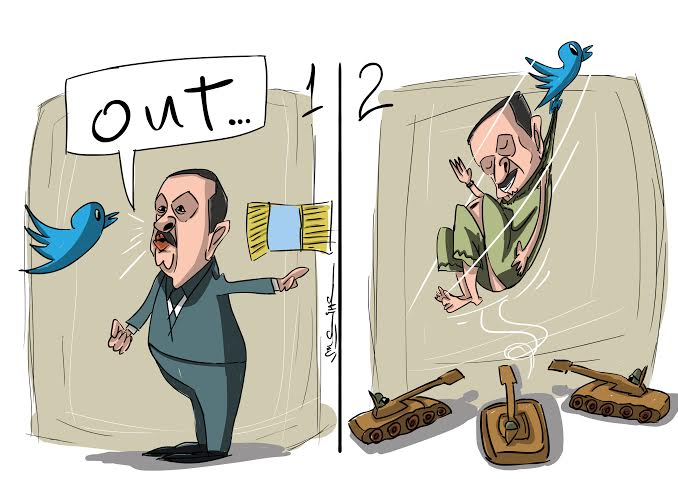 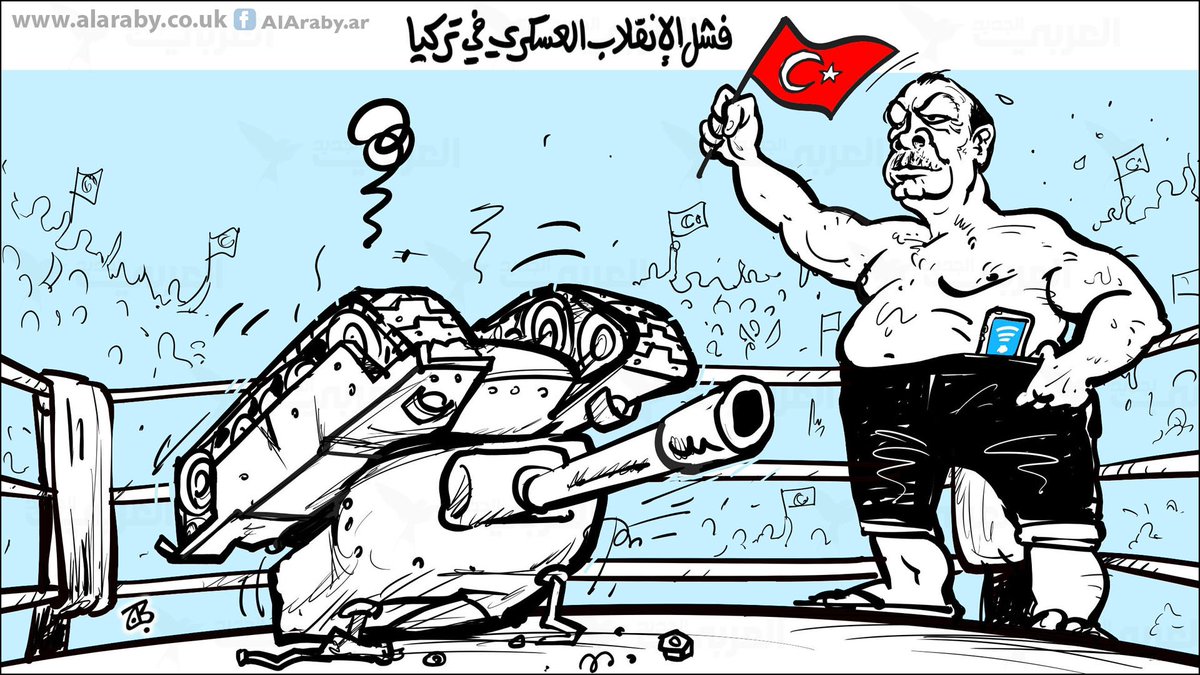 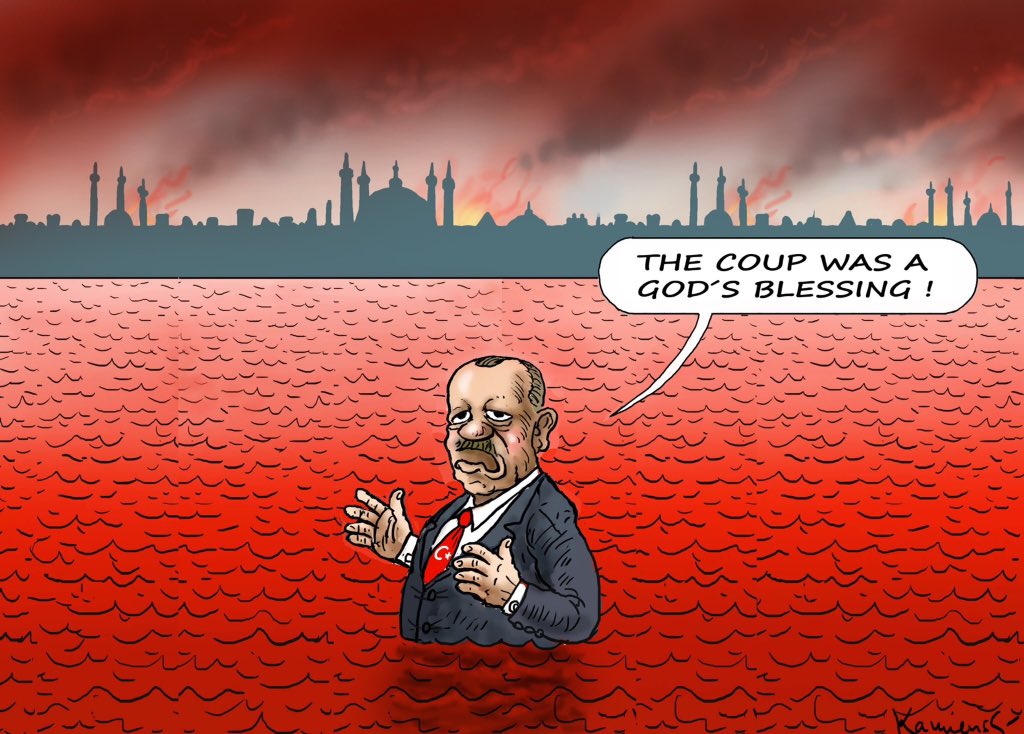 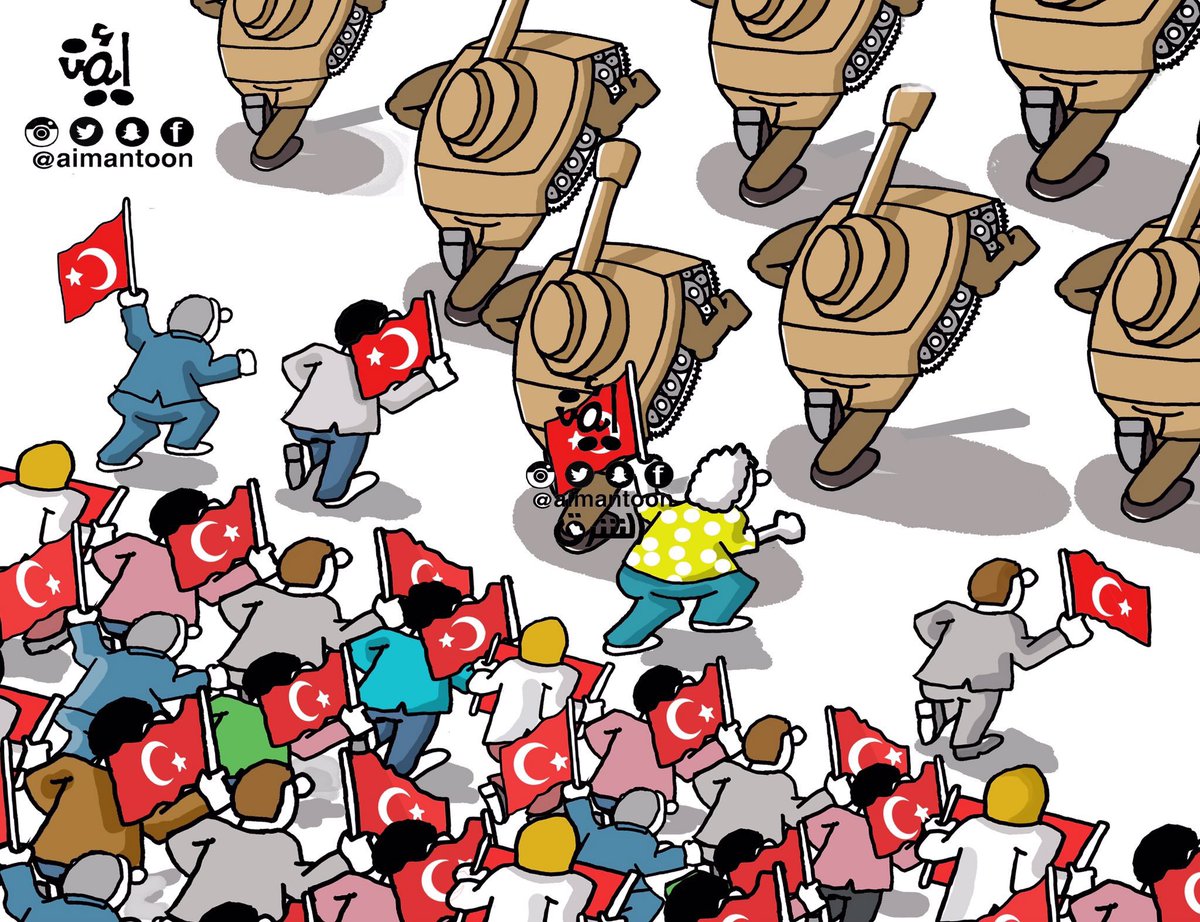 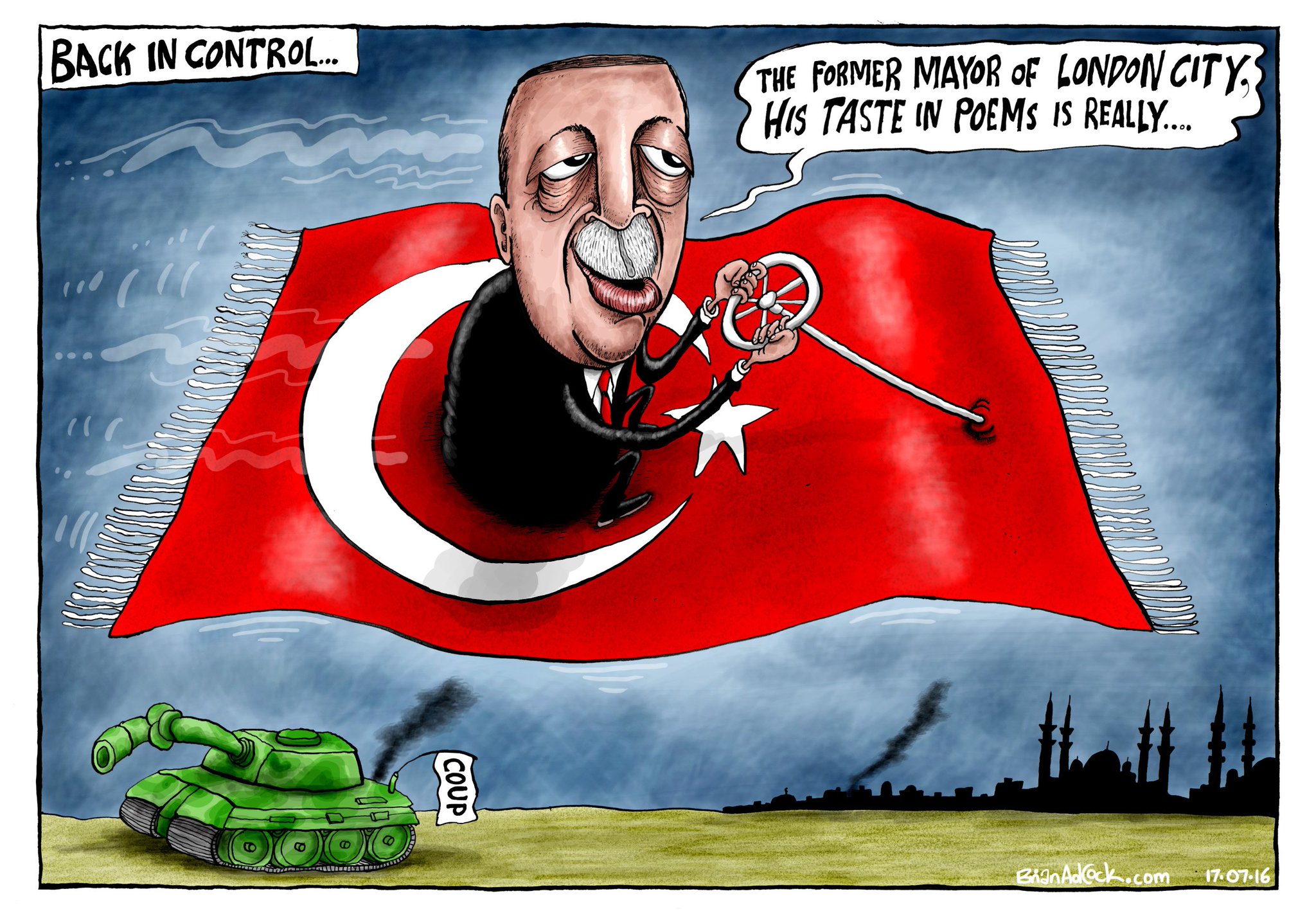 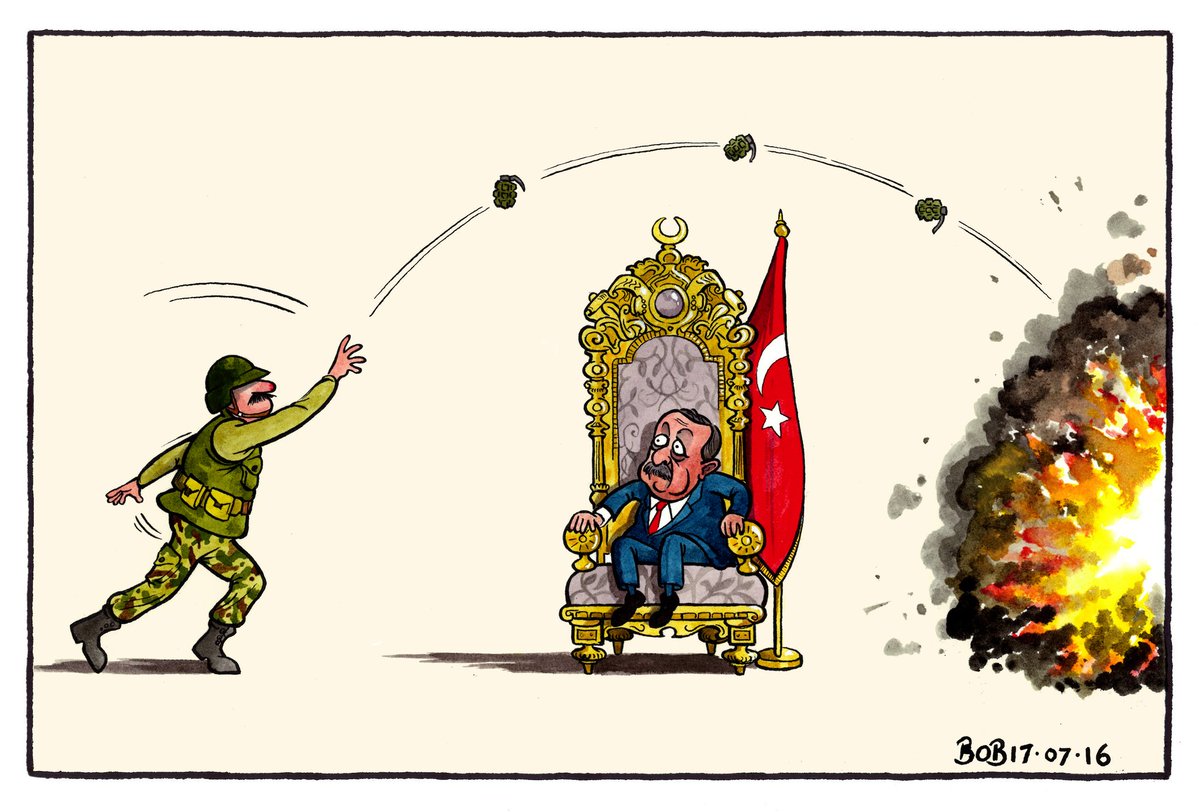 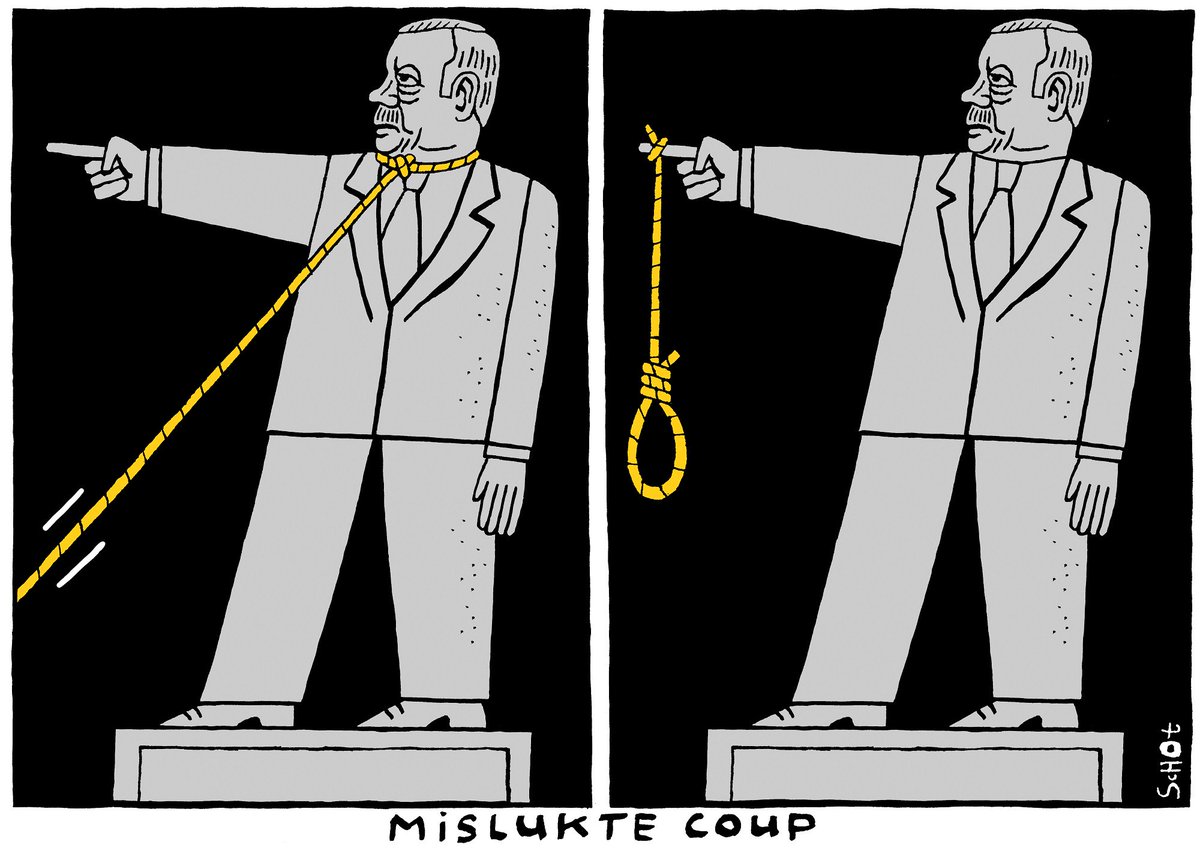 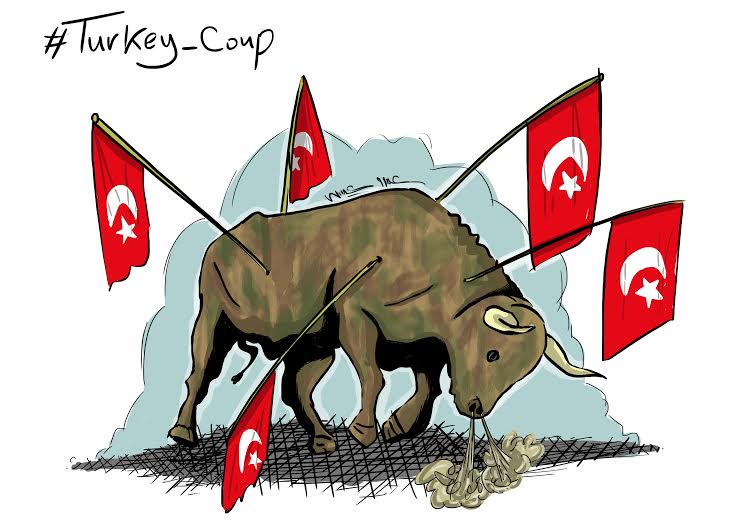