The British newspaper DailyMail with a link to the Israeli publication Debka reports http://www.dailymail.co.uk/news/article-3567590/British-special-forces-fighting-Libya-ambushed-ISIS-suicide-bombers-killed-Italian-troops.htmlthat in Libya the British and Italian military were ambushed Caliphate and suffered losses.

The essence of the event similar to the following.

1. In Libya for several months, without fanfare, there are special divisions of the NATO countries, the regime in Tripoli, supplies of small arms, munitions, light armored vehicles, troops from Britain, France and Italy are deployed on a permanent basis in Misrata and Benghazi.

The location of the French special forces in Benghazi, according to Stratfor

2. Main objectives of the military presence – to strengthen the regime in Tripoli to take control of the illegal export of Libyan oil through the ports and terminals controlled by the militants of the Caliphate and al-Qaeda, to stop the expansion of the Libyan province of the Caliphate. The General goal is to take the Libyan capital of the Caliphate, the hometown of Muammar Gaddafi – Sirte.
In the long term – provide opportunities to limit the flow of migrants through Libya to the EU countries, which requires strengthening of local government.

3. Events according to the description developed so – column of the British commandos SBS (special forces of the Navyhttp://www.eliteukforces.info/special-boat-service/ – this part took part in the NATO aggression against Libya and was involved in the operation “mermaid Dawn” to capture Tripoli along with specialists from SAS and Mi-6) and from Unlisted Italian military units (probably also some kind of special forces), as well as the Libyans who accompanied them, were ambushed local halifatchikov last Wednesday. The convoy was moving from Misurata in the direction of Sirte, fell to her Shahid-mobiles and at the appointed time and made up. Then the column was shelled with mortars, machine guns and small arms.To the rescue flew French and Italian planes and attack helicopters, under cover of which the column fled back to Misurata. How many Italians were killed, the Israelis are not misleading. About the loss of Libyans are not reported, but who actually believes at all now.

4. British war office has taken a clever position on this episode of “We do not confirm nor deny reports of the activities of special forces SBS”. It is argued that in the Libyan operations will employ up to 1,000 British soldiers as part of the 6000-year contingent under the formal leadership of Italy.

Actually, this story is remarkable not primarily because Barmaley crumbled Italians and forced the proud Britons to skedaddle back to Misurata, and the fact that it lit up the growing military pristutstvii of NATO in Libya, where they are trying belatedly to clean up after what they have done to this country.

In the Libya intervention is not very welcomed by the population in Benghazi and Tobruk harness Italian flags and require Italy to get out of Libya http://www.ansa.it/sito/notizie/mondo/2016/04/30/libia-bandiere-italiane-bruciate-tobruk-e-derna-_943f46d7-f77e-44ab-85ab-4159849edf81.html This attitude is not surprising, as Libya has long been a colony of Italy and there have not forgotten about the previous “owners”.

Map of disintegration of Libya.
http://soufangroup.com/wp-content/uploads/2016/01/TSG_Libya-Extremism-and-the-Consequences-of-Collapse-Jan2016.pdf – the January report of the information and intelligence centre of the Soufan Group http://soufangroup.com/ (the founders are former officers of the CIA and the FBI). 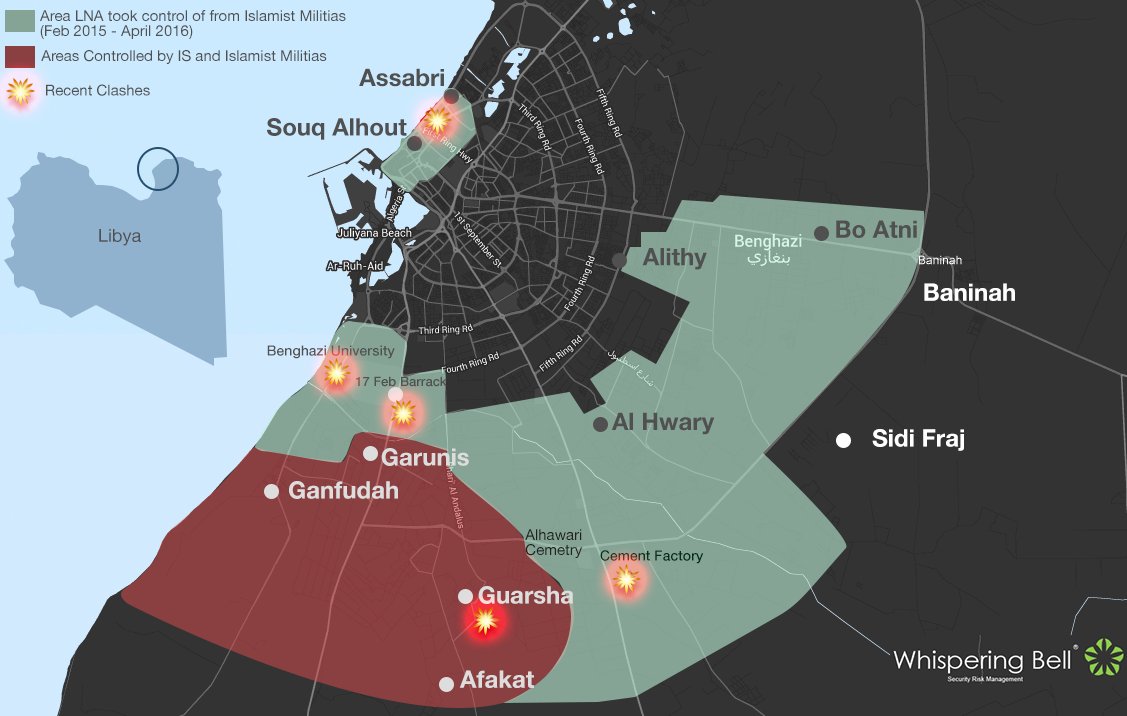 The front near Benghazi. Green is the LNA, red – Caliphate. The end of April 2016.

As you probably know, the events in Libya and will continue to develop a very “picturesque”, and the case is proving “the triumph of freedom and democracy.”

But once it was very prosperous and civilized country…