A review of the military situation at Aleppo by 16 April 2016.

By the middle of the month the battle of Aleppo continues to be key to the progress and outcome of the Syrian war. Irrespective of the partly existing truce (which adheres to only a part of the “green” tied to the United States) and the holding of Syria’s elections (which will not be recognized by the West, “green” and the Kurds and de facto little influence on that), the war goes on and all 3 sides of the conflict take an active part in the operations under Aleppo. As before the fights go in different directions, where the parties are fighting among themselves. As previously noted is the fact that all 3 parties are trying to conduct offensive operations to achieve decisive results related to control of roads and settlements in Aleppo, which should provide advantages in the fight for the city itself divided into zones of control.

From the beginning of April all 3 parties said that will carry out active operations during the first two weeks we saw the realisation of these ambitions.
Consider the main sites of the battle for Aleppo. 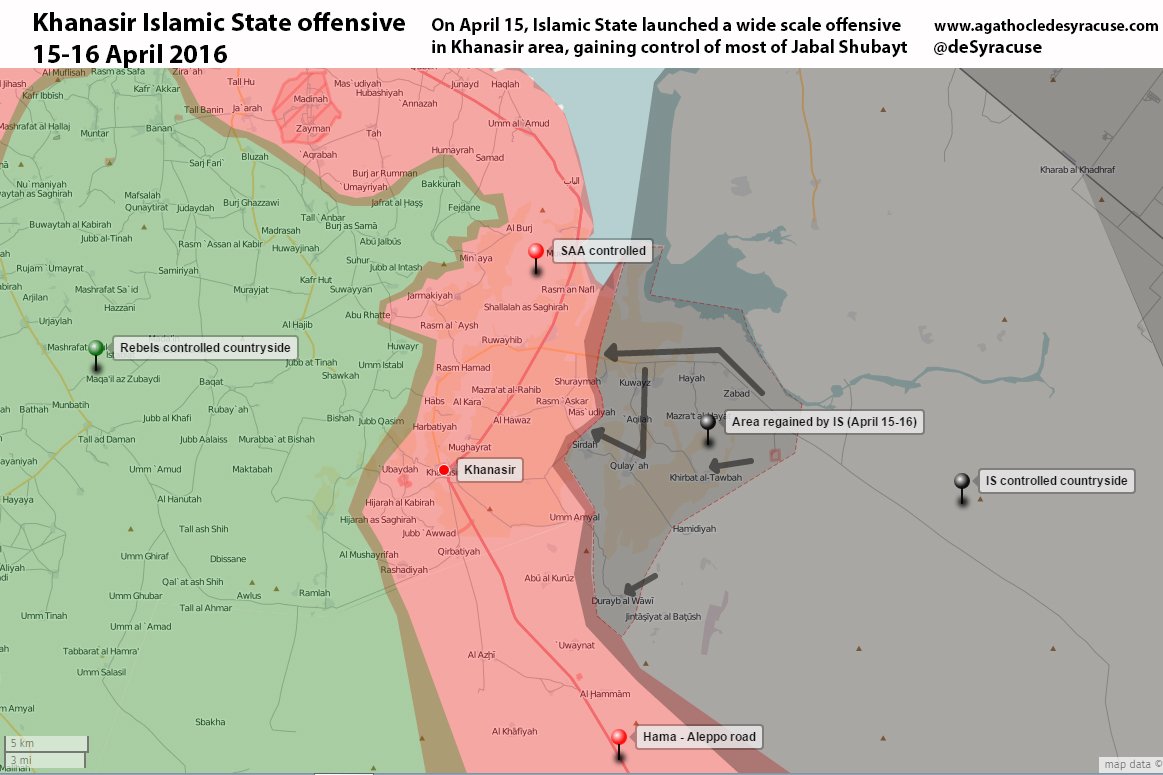 Having suffered defeat in the February battles for the track at Khanasser, as well as the March defeat at Palmyra and al-Cartana, by April the Caliphate carried out the necessary regrouping of troops and once again began to show offensive activity from April 14-15, resumed attacks on the track at Khanasser. all with the same purpose – to enter the ring, to gain a foothold there and to intercept the supply channels grouping SAA leading the fighting to the East of Aleppo.Previous attempts failed due to insufficient strength of the militants, but the idea seems quite logical, as the attack on the track forced the command of the SAA to bring additional forces to repel the militias coming to the track. This time the Caliphate once again managed to jump out to a track, but not for long and “fire brigade” quickly drove away “black”, which nevertheless hit the piece of land with several villages to the East of the road and took a fairly serious loot in the surrounding villages (including Iran).In addition to the standard objectives associated with the struggle for the route of Khanasser, the Caliphate solves the problem of binding of Syrian troops in these local battles, which prevents troop concentrations to more ambitious plans involving offensive on Raqqa, Deir-ez-Zor and Aleppo.

It should be expected that the SAA will be forced to bring additional power from the North by weakening the pressure on al-Bab and Deir-Hafer. After militants once again broken, we should expect the transfer of units out of Harasser directly under Aleppo in late April – early may. 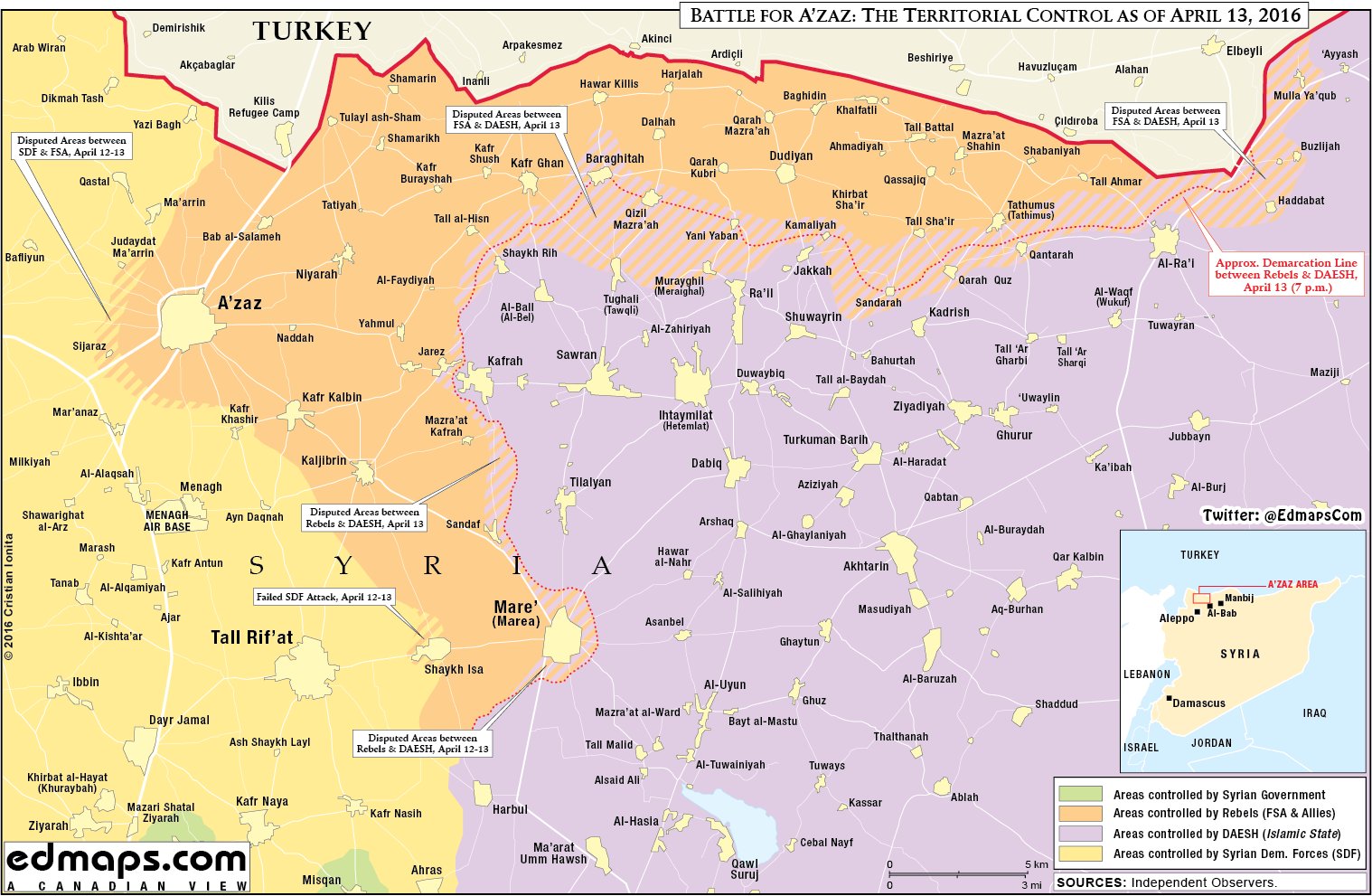 From the beginning of April with the support of Turkey (strikes by artillery, worked with the Turkish special forces and spotters) along the Turkish-Syrian border green launched the attack on the Caliphate, which was forced to withdraw some of the forces to other fronts and thereby gave the opportunity to “green” to expand the control zone at the Turkish border. As mentioned earlier, in addition to military purposes connected with the fight against the Caliphate, Turkey here solves the task of preventing cohesion of the Kurdish areas near the border with Turkey with the transition of the entire Syrian border with Turkey under the control of the PYD and YPG.

Initially, the offensive developed very successfully, there were dozens of settlements, the Caliphate suffered heavy losses in men, were taken as trophies. Advanced parts of the SAA appeared in the outskirts of the large border town of al-Rai has important logistical importance to the military infrastructure of a Caliphate in Northern Syria. The fighting had been going on al-Rai (it was announced about the complete capture of the city), when the situation began to change rapidly.

The Caliphate was transferred to the North up to 3000 people with carts, mortars and rare armor and organized a counter-attack into the flank of the advancing al-Rai groups green. The rapid offensive quickly turned into a rapid escape. Now the Caliphate has gained trophies, struck the “green” significant losses in people and equipment, drove them from al-Rai and liberated a significant chunk of lost territory and even tried to advance to Azaz. 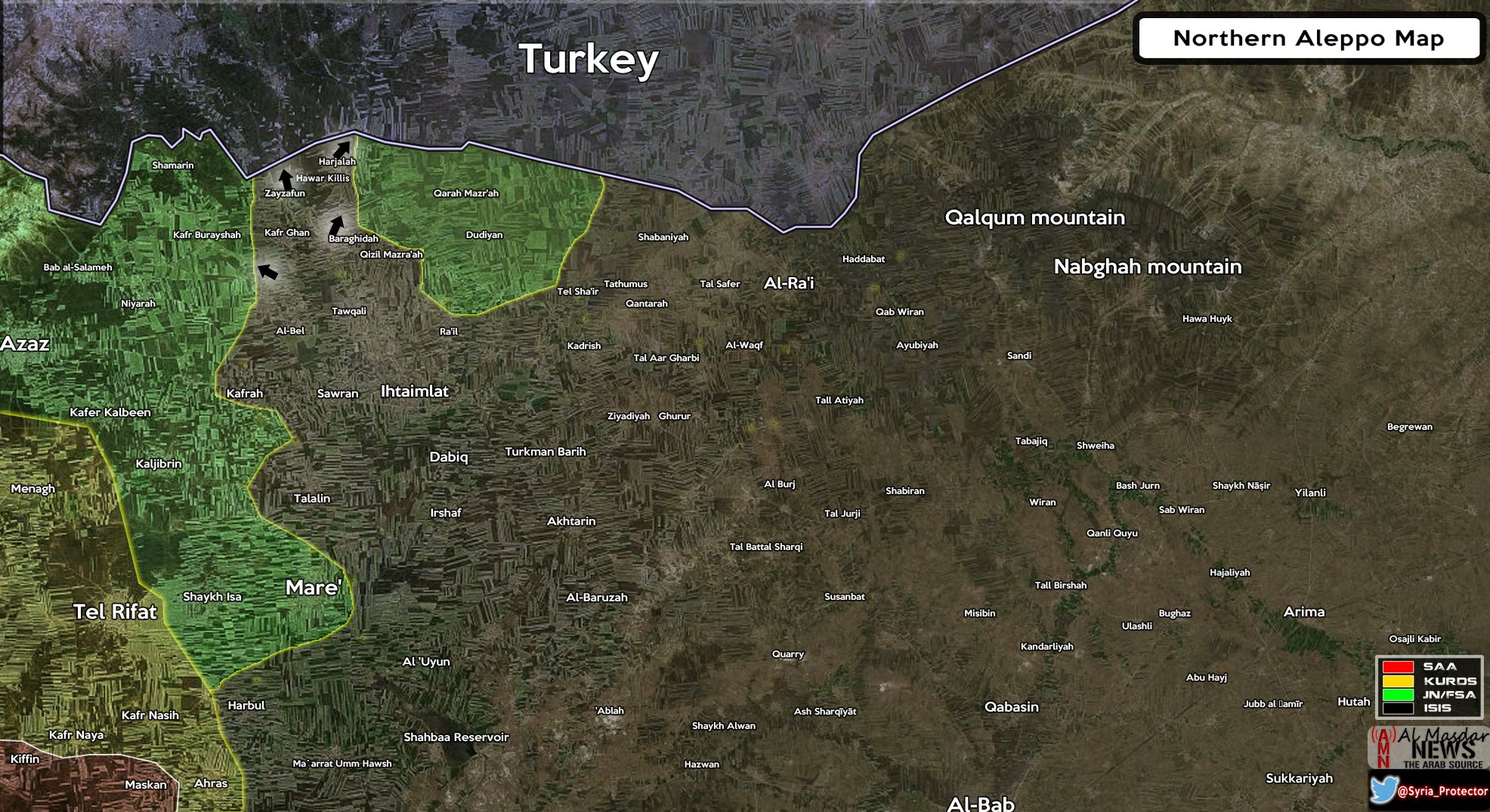 In the end the parties have lost in these battles in the area of 150-200 people killed and wounded. The Caliphate stopped an immediate threat, losing only a piece of territory near the Turkish border that is difficult to maintain due to the activity of the Turkish artillery. But when “green” detaches from his Turkish “insurance”, the Caliphate has once again demonstrated its military superiority over the PAS in direct military conflict. It is obvious that the fighting here will continue.The Turks will push “green” along the border, and the Caliphate will attempt kicks in the flank to stop this promotion when the event causing the defeat of the “green” where the Turks will not be able to provide them with timely support.

In the city continue fighting medium, where green was trying to move the Syrian military and the Syrian Kurds, but despite all efforts and considerable sacrifices on both sides had no success. The parties simply not enough forces in the city to carry out intensive cleaning of residential areas, so the success here is usually measured occupied buildings.The issue of control and optimize Aleppo is associated with the cutting of the corridor supply “green”, without which “green” in Aleppo would effectively be surrounded by and begin to experience problems with food and ammunition, especially for heavy equipment. But at this stage the CAA while it is difficult to concentrate the necessary forces for attacks on the neck to the West of Aleppo, as the main forces now associated operations to the South and South-East of Aleppo. Nevertheless, preparations are already underway.

Militants “An-Nusra” replaced with the suburban area of al-Mallah, somewhat narrowing the neck to the West of Aleppo. Read more about these battles here http://cigr.net/glavnoe/25999-siriya-nachalo-operacii-po-okruzheniyu-aleppo-14-04-2016.html
The humanitarian situation in Aleppo has long been at the brink of a humanitarian catastrophe. The number of killed civilian during the fighting in the city and its surrounding areas count even more difficult than the numerous the loss of the military on three sides. It should be noted that fighters of al-Nusra in late March got into the habit of actively peck on residential areas controlled by the Kurds and SAA of improvised MLRS and mortars. Including used and poisonous gases http://cigr.net/glavnoe/25958-siriya-kurdskiy-rayon-vnov-obstrelyan-otravlyayuschim-gazom.html Responsible for chem.the attack was taken by the grouping of “Jah al-Islam”.

Overall, we are now witnessing the period of struggle for the initiative. Attempts to “green” to move to the South of Aleppo were ustanovleno al-Ezra. North of Aleppo they suffered a defeat at al-Rai. At this stage the initiative is trying to take over the Caliphate conductive 2 offensive – Harasser and the Syrian-Turkish border. In the near future should begin the promised offensive of the SAA with the support of the Iranian airborne brigade and Russian HQs.

Directly to command the operation will be Colonel Suhail Hassan http://cigr.net/glavnoe/25984-siriya-naznachen-komanduyuschey-operaciey-po-osvobozhdeniyu-aleppo.html, whose troops are deblocked in the fall of the airbase of Covaris, and then defeated the troops of the Caliphate in the fighting East of Aleppo. You have to understand that no cost and without our military advisors and Iranian colleagues. The other day the media reports in Moscow flew General Soleimani http://www.kp.ru/online/news/2366282/ Apparently to discuss military cooperation in the forthcoming operations + will be discussed the issues of military supplies to Syria (not only the CAA but also for Pro-Iranian groups) and the purchase of weapons for Iran.

One of the architects of the Russian-Iranian-Syrian military coalition, General Soleimani http://colonelcassad.livejournal.com/2419221.html As the Russian military, have done a lot for the Assad regime succumbed to the attacks of numerous enemies.

In these fights and decide who will remain the next stage of the battle for Aleppo. Full control of the town but it was not working, the key has control over the roads leading to Aleppo and key transport interchanges. Only defeating the advancing units of the Caliphate, al-Nusra and Ahrar al-sham, the CAA will be able to move to a full liberation of the city. Somewhat simplifies the task for the CAA of the fact that the Caliphate, the FSA and al-Nusra are fighting each other to the North of the city, but of course to rely only on what they themselves will kill each other is not worth it.

The second half of March. The Russian military being transferred under Aleppo.

Apparently the footage lit up the calculation of MLRS “Smerch”. These vehicles are operated under Aleppo since February, along with tanks T-90.

In the first place need to be permalite units An-Nusra in the battle of al-LSA, as well as to drive away the troops of the Caliphate from the road at Khanasser. Of course, this activity is “green” and “black” is, among other purposes, and even ways to disrupt the preparation of the SAA to liberate Aleppo. At the moment they have reached their goal, but let’s see how long they will last.

The battles themselves are of a very violent character – and To the CAA over the last week have lost over 100 men killed, al-Nusra and Co. more than 160 killed, the Caliphate more than 70 dead. The battle for Aleppo continues to devour people and vehicles and the end not yet in sight.

According to the promoters of the Caliphate in recent times “black” has killed 183 militants, FSA, 194-soldiers SAHA, 133 Kurdish militias of Rojava and the Peshmerga and Iraqi soldiers 535 + plus crammed a bunch of equipment and 10 boats.
Check these statements very difficult, although on the part of victims, they are to some extent korallrot what you post in the photo and video sides of the conflict. About their losses, they are understandably silent.

http://cigr.net/glavnoe/26027-siriya-informaciya-ot-rossiyskogo-centra-po-primireniyu.html Official Bulletin of the Russian centre of conciliation from 15.04.2016

http://cigr.net/glavnoe/26022-siriya-bolee-150-boevikov-peresekli-turecko-siriyskuyu-granicu.html – More than 150 fighters crossed the Turkish-Syrian border to enhance the green group in Latakia

http://cigr.net/glavnoe/26020-siriya-vylazki-islamskogo-gosudarstva-v-rayone-palmiry.html – fighting in the area of Palmyra

http://cigr.net/hroniki-cigr/25955-siriya-igil-nastupaet-v-lagere-yarmuk-v-damaske.html – the Attack on the camp “Yarmouk”

http://cigr.net/hroniki-cigr/25982-siriya-likvidirovan-polevoy-komandir-igil.html – On the death of field commander of the Caliphate in battle near Umaira

http://www.fubiz.net/2016/04/12/designer-created-a-table-that-pays-tribute-to-the-demolished-city-of-aleppo/ – the title photo reconstruction of a street in Aleppo