In the zone of the Karabakh conflict initiated a forced aggravation.

Armenian armed forces launched a counteroffensive in several areas of the zone of the Karabakh conflict, said the press Secretary of the Armenian defense Minister Artsrun Hovhannisyan.

“At the moment ongoing active hostilities. Armenian army launched a counter-attack and on a number of fronts passed to the offensive,” wrote the journalist on his page in Facebook.

“Both sides have lost. The Azerbaijani side suffered significant losses in manpower and equipment, shot down the helicopter. Currently, the initiative in hostilities is in our hands”, – said the press Secretary of the Armenian defense Ministry. Earlier, the press service of the defense Ministry of the unrecognized Nagorno-Karabakh Republic (NKR) reported that the Azerbaijani armed forces in the night of Saturday has taken offensive action on several fronts the Karabakh conflict zone.

According to the Ministry, Azerbaijani side in the southern, South-Eastern and North-Eastern directions of the line of contact had used artillery, armored vehicles and aircraft.

“Except for fighting on the front line, the enemy put artillery strikes on peace settlements and the places of permanent deployment of some military units. At the moment all along the line of contact there are intensive clashes“, – noted in the Ministry of defense. The frontline units of the NKR defense army are defensive battle.

At night the Armenian armed units on different areas of the front 127 times violated the ceasefire regime, using 82 and 120 mm mortars and heavy machine guns.

Dailykarabakh about it reported in a press-service of the Ministry of defense of Azerbaijan.

URGENT! In the night of 1 to April 2 in the North-Eastern and South-Eastern areas of the state border of the Republic of Artsakh, the enemy launched an offensive using artillery, armored vehicles and aircraft. At the same time a blow was struck at peace settlements and several military units of the armed forces of Artsakh. All the way along the Artsakh-Azerbaijani border defense Army maintains a heavy fighting with the aggressor. The enemy suffers great losses. There are also losses from the Armenian side.

The Ministry of defence of the self declared Nagorno-Karabakh Republic said on Friday about the death of a soldier by a sniper on the contact line with the armed forces of Azerbaijan.

“As a result of violation of ceasefire by the Azerbaijani armed forces killed the soldier Vladimir Melkonian, 1996 year of birth”, — stated in the message of the press service.

According to the defense Ministry of the unrecognized Republic, the incident happened around 12.20 PM (11.20 GMT) in the Northern direction of the line of contact. The circumstances of the incident are being investigated.

The situation in Nagorno-Karabakh has continued to escalate.

In fact in some areas are full-fledged fighting.
According to Armenian sources with unconfirmed 1 downed helicopter during the first half of the 2nd April were destroyed – 1 helicopter, 2 attack drones and 3 tanks. It is also reported about the destruction of Azerbaijani DRG, Reported civilian casualties. Azerbaijani sources indicate that their military was able to take several heights and capture a few prisoners, and to cause substantial damage to manpower and military equipment of the enemy.

The area of Mrav mountain, where he was supposedly shot down attack helicopter Mi-24 of the Azerbaijani army. 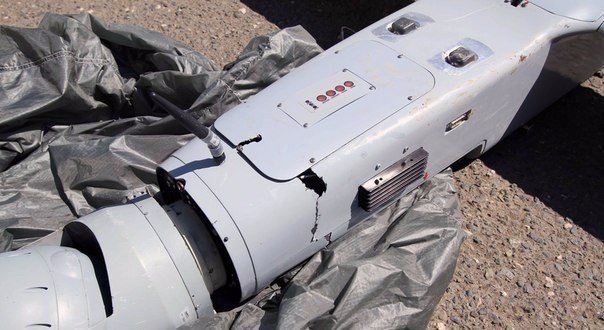 Photos of the downed drone 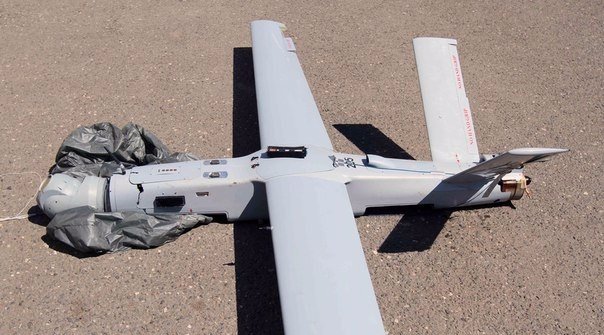 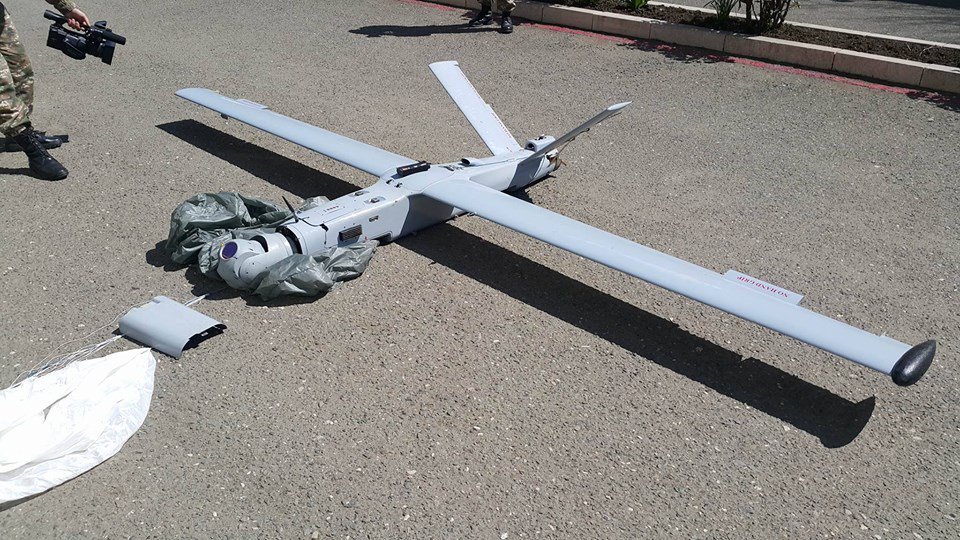 The sounds of night fight and their consequences in the morning.

The arrival of the projectile.

Russia officially calls upon the parties to cease fire. Last time Russia’s efforts helped to prevent the war, it is to be hoped that this time it will work.

The parties to the conflict while fingers at each other in aggravation. Armenia urged the world community to influence Azerbaijan. SAT evening is convened Armenia, which will discuss what is happening.
The situation de facto is on the verge of escalating into full-scale war, used a wide range of weapons, with the exception of massive use of aviation and MLRS.

Continue to monitor development of hostilities in Nagorno Karabakh.

By evening the situation had stabilized somewhat. The troops of Karabakh repulsed in most areas where the attacks of the Azerbaijani army, while the Azerbaijanis managed to keep some of the height that they took advantage of suddenness of attack. Now there are ongoing battles with use of armored machinery and artillery. At the moment in Armenia, Karabakh and Azerbaijan full mobilization has not been announced – the full-scale mobilisation activities will mean that a full-scale war is inevitable.

The area of the promotion of the Azerbaijani army (Azerbaijani version), which had occupied several heights and allegedly taken is one other settlement that the Armenian side refuted.

A reader writes:
Supposedly taken at the height of the Talysh. There is information directly from the field. Around 20:30 razgovarival with guys. No changes to positions there. 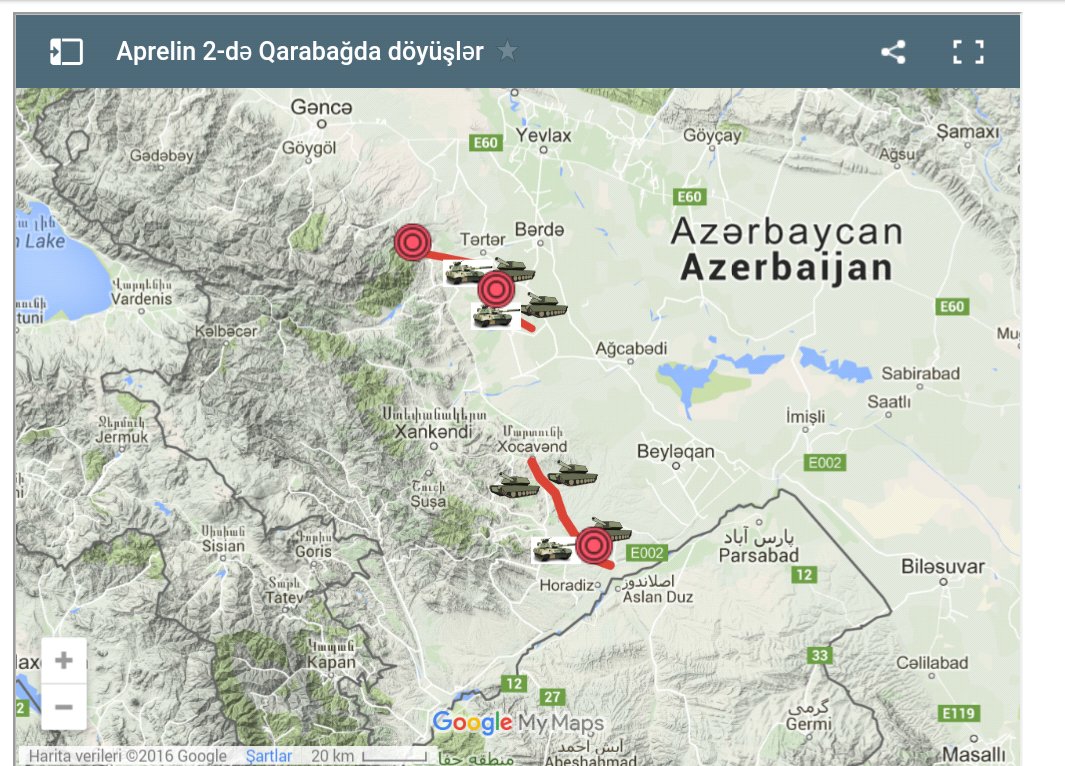 The main areas of fighting.

with Courage (from the Armenians):
At the moment the situation is the following: I think that for all it is clear that we are in a state. It’s obvious that now, as in August 2014 year, for the purpose of Azerbaijanis is the success of an at least one sector of the front, even at the cost of hundreds of victims.
The fighting, which began last night and is still maintained along the entire length of the Armenian-Azerbaijani border of Artsakh. This is the case when informal information is sometimes ahead of the official, and consequently we consider it necessary to make some clarifications.
• At least according to the hour of the loss of the enemy consist of 3 tanks, 2 attack helicopters and 2 unmanned aerial vehicle and an unknown number of victims and wounded among the combatants. Victims and wounded there are also among the civilian population. Note that the Ministry of defence of Azerbaijan has confirmed the loss of only the 1-St of Mi-24 helicopter, 1 tank, and the death of 12-and voennosluzhaschih.
• Also officially confirmed that the Armenian side also suffered losses. At this point, the data has not been published, and we urge everyone to respect the identity and right of military personnel to safety and not engage in “Amateur” before the publication of official communications.
• A number of Azerbaijani villages – Sysarch-Margushavan, Gapanly, Gargage – fully or partially evacuated. About this to the Armenian side became known very soon that supposedly forced the Azerbaijani propaganda machine (through APA) to publish a report about the “happy and brave residents of border villages”.
• We, too, are victims among the civilian population near the front line, but, fortunately, inhabitants of our villages are strong in spirit, and incidents of escape and panic is not observed.
• Azerbaijan suffered heavy losses especially in the North-East direction and in the district of Aghdam. In the South the situation after the sudden success has stabilized, and there are already hints (among Azerbaijanis) on the counter-attack of Armenians to the South.
• The press Secretary of the RA Ministry of defense officially confirmed that information about the numerous losses of the Armenian side, as well as the information about the evacuation and the mobilisation untrue. I will add that in Azerbaijan mobilization is not declared.
http://razm.info/ru/8049

I am in Stepanakert. The attack repulsed, the Azeris rejected on all fronts. The situation is tense but calm. If it was changed I wouldn’t have the Network.
Men are evil and intend to go further. The problem of concern – will the policy do that or not.
Angry much that they “Hail” in the school – jackals handwriting.

On losses.
Azerbaijan at evening recognized 12 killed, 1 tank, 1 UAV and 1 helicopter and says about 100 dead enemy soldiers and 6 tanks and 15 guns.
Karabakh recognizes the existence of 18 killed and 35 wounded and declares 200 dead enemy soldiers and destroyed 8 tanks, 3 APCS, 2 helicopters and 2 drones.
Given the scale of the fighting and the forces involved, I’d assumed that the counting losses of the parties should be conducted with a few dozen on each side. I am sure that the final casualty figures for April 2, will be counted in dozens on both sides. About hundreds of dead – standing still to wait for actual confirmation, the more that information from the front lines comes quite sparingly.

Regarding the question “for whom to cheer?”. At this stage, Russia is not interested in supporting one of the parties, as it will involve her in another war apart from the war in Ukraine and war in Syria. Resources from the Russian Federation waits for no one – to get into another war with questionable purpose, it may be more expensive. It is therefore logical that Russia is committed to settle this conflict and maintain the status quo through diplomatic means. Opponents of the Russian Federation will of course be interested in return.If to stop the conflict do not succeed, then Russia will face a difficult choice, because whoever she was supported by (more than likely that Armenia), it will incur significant costs in the Caucasus. I am sure that the Turks or the Americans (clearly someone has pushed Aliyev) this point was taken into account. 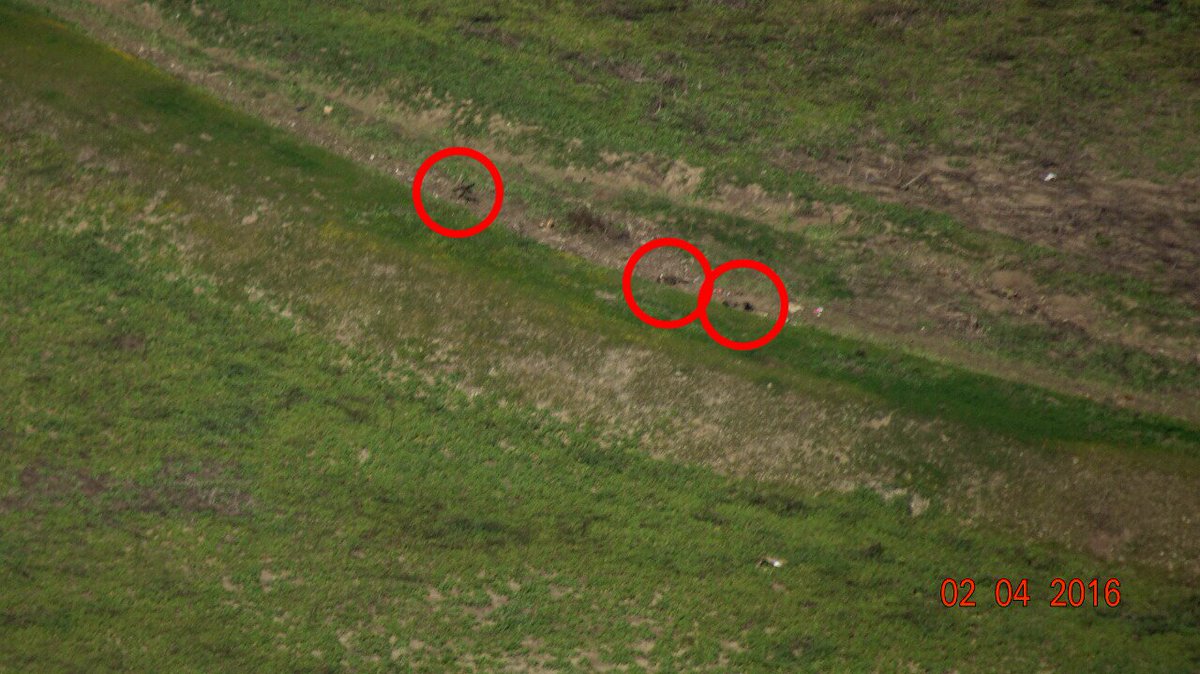 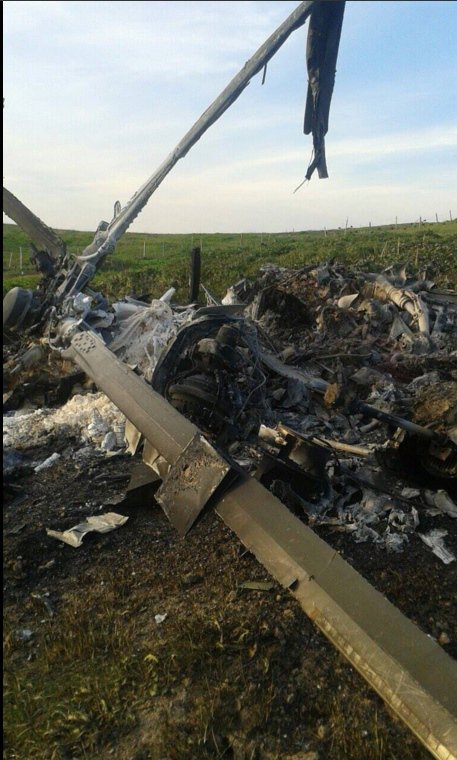 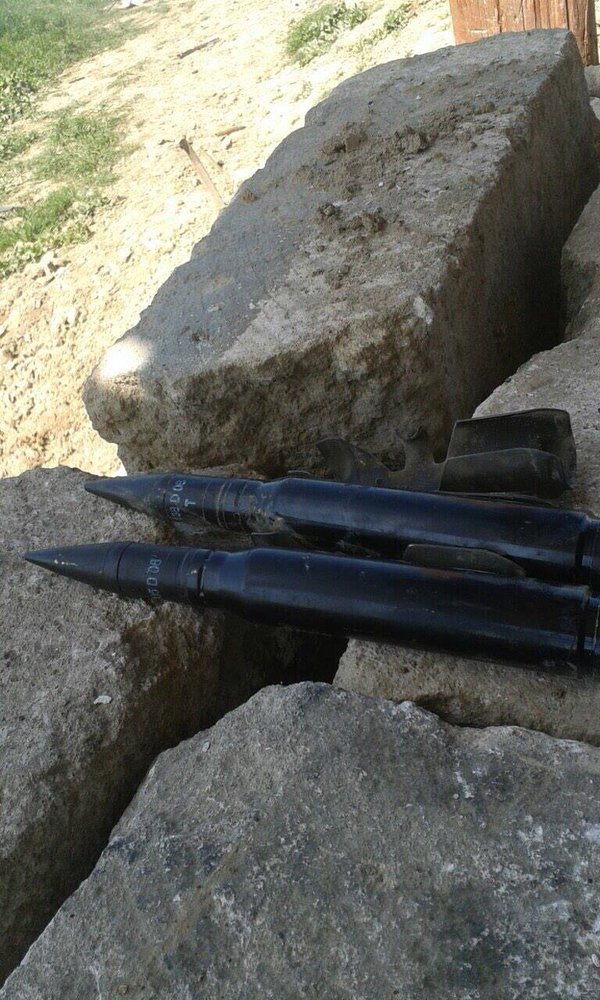 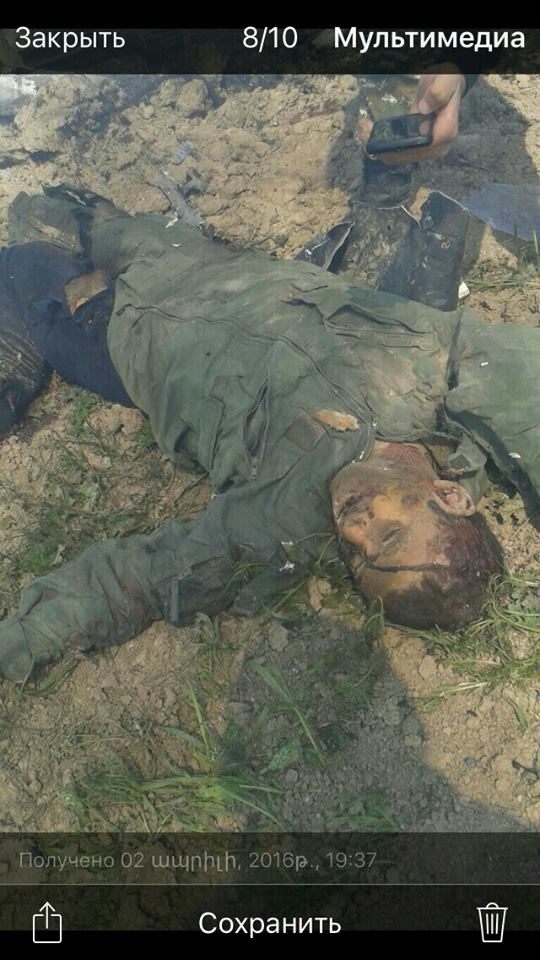 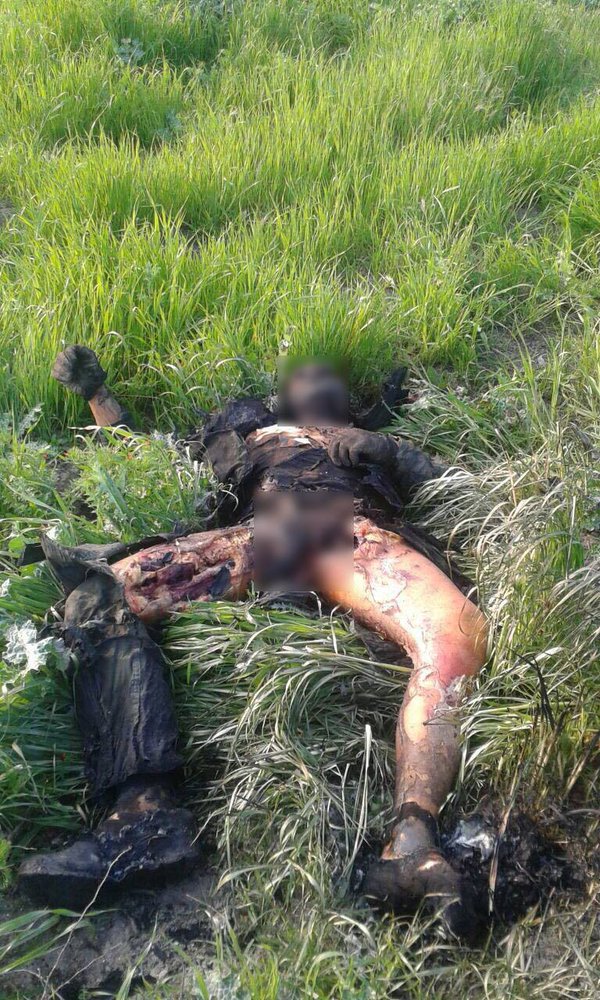 Destruction after shelling of MLRS “Grad”.