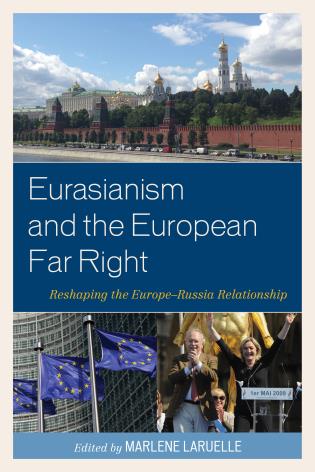 A new book on Alexander Dugin’s Eurasianism and Europe has been published, Eurasianism and the European Far Right: Reshaping the Europe-Russia Relationship (Lanham: Lexington Books, 2015), edited by Marlene Laruelle and supported by the Carnegie Council.

The book examines the three-sided relationship between the Russian government, European neo-nationalist parties and Eurasianism. As David Speedie notes in the foreword, one important thing that is going on is “Russia’s rising soft power among European parties and countries that feel victims of the European Union ‘technocracy.'” To this might be added the impact of globalization, to which many also feel victim. Eurasianism is not synonymous with Russian soft power, but is an aspect of it.

The book is a collection with ten chapters, two introductory and one by way of conclusion. The remaining seven chapters deal with Russia itself and with France, Italy, Spain, Turkey, Hungary and Greece. One introductory chapter is by Laruelle, and the other by Anton Shekhovtsov, who also wrote the conclusion. The other chapters are by scholars specializing in the countries they cover and/or in the New Right.

The chapters on Turkey and Hungary are among the most interesting. Vügar İmanbeyli charts and explains Dugin’s initially enthusiastic reception in Turkey, a reception that became less and less enthusiastic over time. Umut Korkut and Emel Akçali show how what is in some ways a Hungarian version of Eurasianism, Turanism, gained influence within Jobbik and even, to a lesser extent, Fidesz.

Unfortunately lacking is a discussion of the current, as opposed to historical, importance of Traditionalism for Eurasianists and sympathizers outside Russia. Vadim Rossman recognizes the importance of Guénon and Evola for the Center for Conservative Research at the Moscow State University, which was until 2014 an important base for Dugin and colleagues, as well as of related thinkers such as Henry Corbin and the Neoplatonists. Beyond this, it is noted that Greece’s Golden Dawn initially promoted paganism before shifting to Greek Christianity. Nothing more. Even so, the book is important.