Interesting report – from Kuweires conveying the bitterness of the battle for liberation of the airbase surrounded for 2 years .

The front line, Syria: report from the unlocked base Kouvaris

Our correspondents Roman Sapojnikov and Dmitry Zhavoronkov yesterday visited the airbase of Covaris, near Allepo, which a few hours before government troops unblocked ATS.

Kuweires Airbase stood two and a half years of siege, the majority of the time while under full blockade. Theoretically, the base was under the control of government troops, but for more than half a year they could not use the helicopter, because the whole runway was exposed to fire of snipers, and the entire base was covered by mortars. The soldiers bit into this little piece of Syrian land and stayed. There was no hope. The base was cut off. Minimum ingredients, no drugs. This means, any serious injury and certain death. Either from blood loss or from infection.

At the front and solid lesions. Palmyra surrendered, the enemy has the initiative. It seemed, to get help. But the fighters were kept. To survive the day, then another. Tomorrow is a new day and a new battle. Or death. Other choice they had. The Syrians now have their Stalingrad. For Assad, it was a point of honour to release a base. Not to get men, shamefully, without weapons, namely, to release. And help came. Thanks largely to friendly aircraft with red stars on the wings. But without the courage and tenacity of the fighters would not have this victory, because help came on the ground.

We’re going fields. There is a road that induced the pontoons across the rivers. Left and right fertile arable land. Unharvested dried corn and a dozen kilometers of the dead villages. Only here understand how hard was this life-saving breakthrough. I had to go chewed off the enemy every meter. Knocking the enemy out of each house. Razmorojenny dust in concrete boxes, burned-out Syrian armor. To the base 5 kilometers.

Adobe fence, it buried the burnt T-62. Dead grim muzzle of the gun directed in a ruined house. Let it close and set it on fire. Already burning tankers had time to post occupied by the enemy house.

To the base 2 kilometers. Zelenka. Beautiful trees by the river. They burned worth Beinasco. Pulled the ammunition, the tower was knocked ten meters, a powerful explosion tore the building to pieces, ribbons caterpillars curled as the laces on soldier tibia — were walking along the road, tried to walk around the house on the hill. Their noticed. The army was rushing to their. Because there, at the base, without medication wounded died.

Realizing that saving the onslaught of the army did not stop, the militants three days ago went to the last powerful storm. Were covered by artillery, Purley ahead. I was at the headquarters, where together with the soldiers had sat the older bosses. The entrance to the headquarters in the pockmarks of bullets. Next the cadets ‘ canteen, which was used by the hospital. On the floor a layer of caked blood, the heavy smell of death and flesh. Is a gurney with traces of fresh blood cut army pants, shouty, used syringes. Before entering the column soon. Inside the wounded to be transported. Right on the pavement on a stretcher lies a young man. Eyes rolled, face earthy color. Over it conjure doctors. The doctor holds tongue, reassuring patting soldier on the head.

After the first assault teams, even sweep the road, went to the doctors. They slipped past taken the village with the militants. This dedicated cast has saved the life of this soldier, who is right here, on the pavement, blood transfusions, inject painkillers. Most likely he will live. As three more of his comrades, whom hooked for half an hour before our arrival. During the years of siege 80 people died from wounds, not having received timely medical aid. They get wounded just yesterday and would be doomed.

Along with the fast came the generals. I’m next, leg hangs over the fresh mortar hopper. A neat hole in the pavement the depth of twenty centimeters, and from it diverge the spray of splinters. In childhood we drew the sun. In the center of a circle and radiating rays. In my head starts playing the song “Let there always be sunshine, may there always be Mama, may there always be me.” I remember on the way here showed me the dried up canal. It bombarded the militants-controlled territory to deprive the people of Aleppo applause water under the sun of Syria. “Let there always be sunshine”. There is no ISIS here moderate opposition. Mortar the sun on the asphalt, bloody mess of a fighter on the pavement and moderate opposition as the author of all this. Full sur.

I throw generals and go on the runway. Along the way, I snatch the fighters. Russian press. Fighters don’t speak Russian. They laugh, raise their hands to the sky as sweep Russian aircraft. A short whistle in the sky, silence and earth sways from bursting bombs. You can not lose the pace. Goes on the offensive. The soldiers laugh in a mixture of the Arab-Russian-English shout, “Thank you Russia! Thank You Putin!” Today they may not final, but a win.

I’m aiming on the runway to make connections to video.

They are riddled with shrapnel. See the runway.

I stopped by the soldiers, asked to be photographed with them in memory. One speaks English.

A young soldier is called to accompany me to the runway. Says it’s too dangerous. It turns out that the runway is an advanced and exposed from everything from mortars to snipers. During the siege there was built a fortress wall with towers. Climb on one. Suddenly my guide napryagayas and pauses. Asks to sit down. Hear the mournful whistle of the mines. Think: “one-two”. Gap. At 150-200 metres. Over the head hard whistling pass splinters. Yesterday we also covered in Palmira. This isn’t funny.

The jig is up — we are at the forefront. We stand atop the “tower”. It stands for anti-tank gun. My guide shows destroyed buildings in the mile. There fighters. Says, a couple of months ago, they have these buildings knocked out the enemy tank. My companion stiffens and falls silent again. Our conversation is interrupted by a second gap mines. I look at the soldier. He is 20 years old, but before me stands a warrior. It’s a victory. I saw soldiers today. People had hope, the men straightened, squared his shoulders. Was approached by senior officers, who studied in the USSR and Russia, and asked him to convey that must prevail. It really the Syrian Stalingrad.

And more pictures of Covaris. 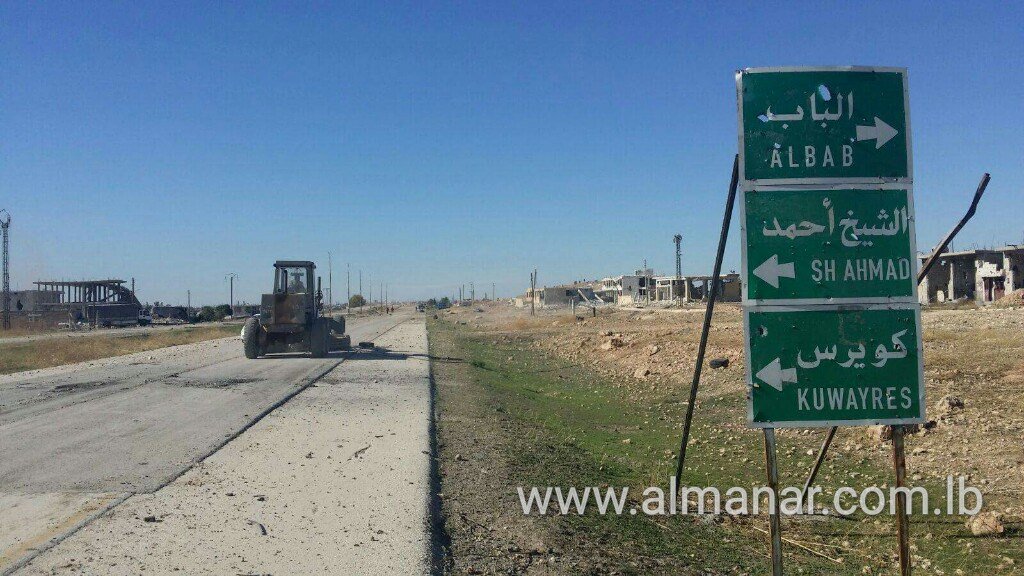 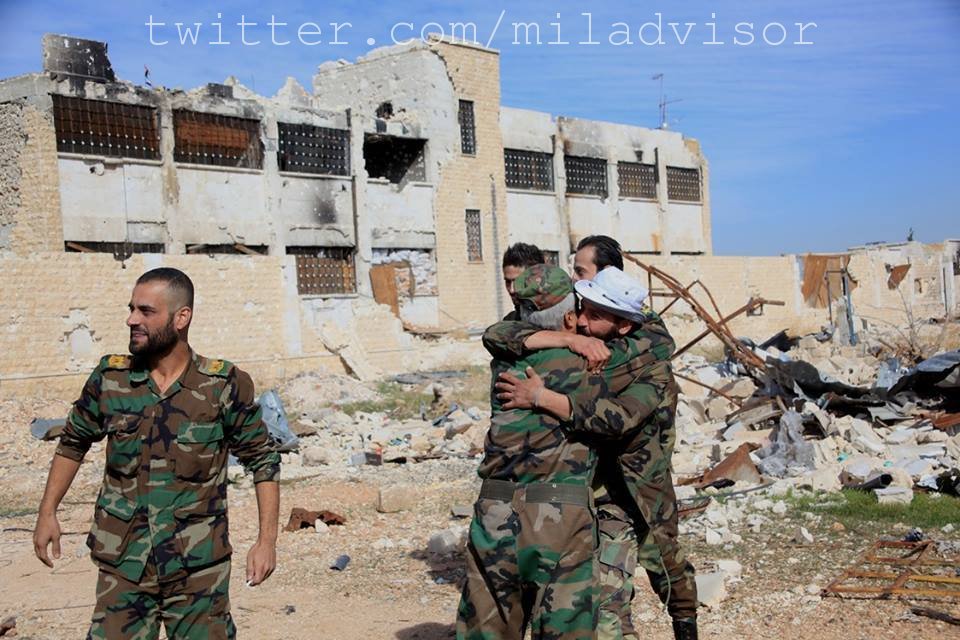 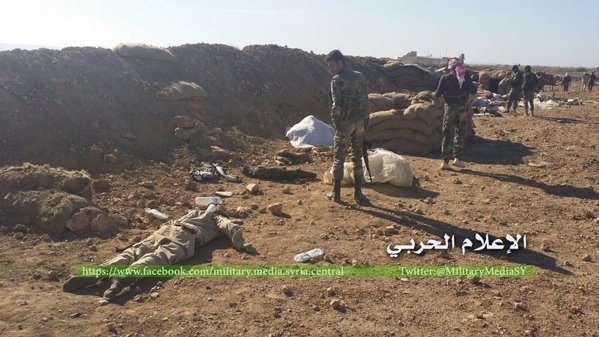 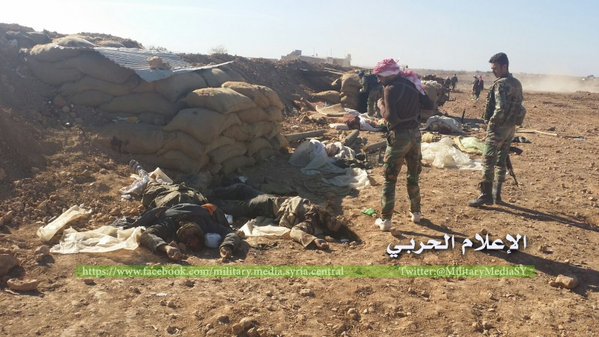 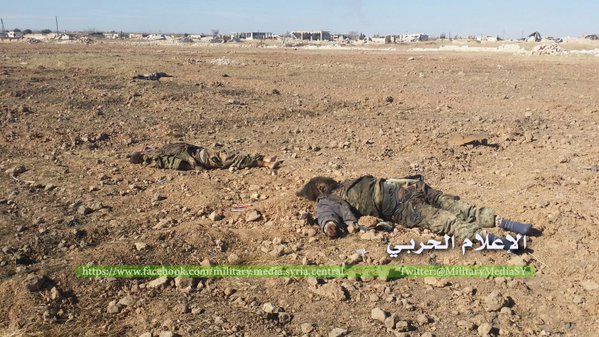 Who died in the battle of Covaris soldiers of the Caliphate.

BMP captured from the Caliphate. 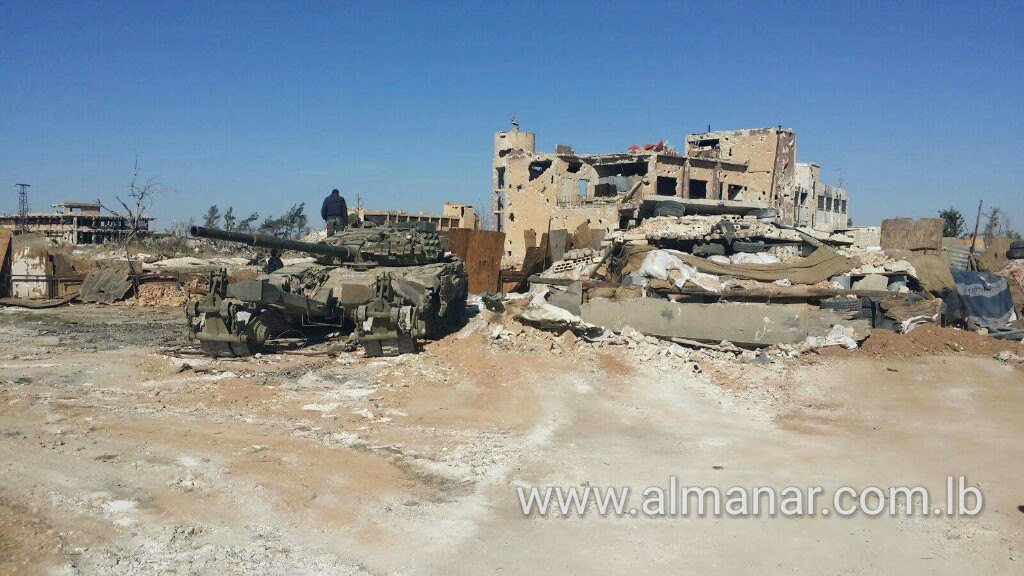 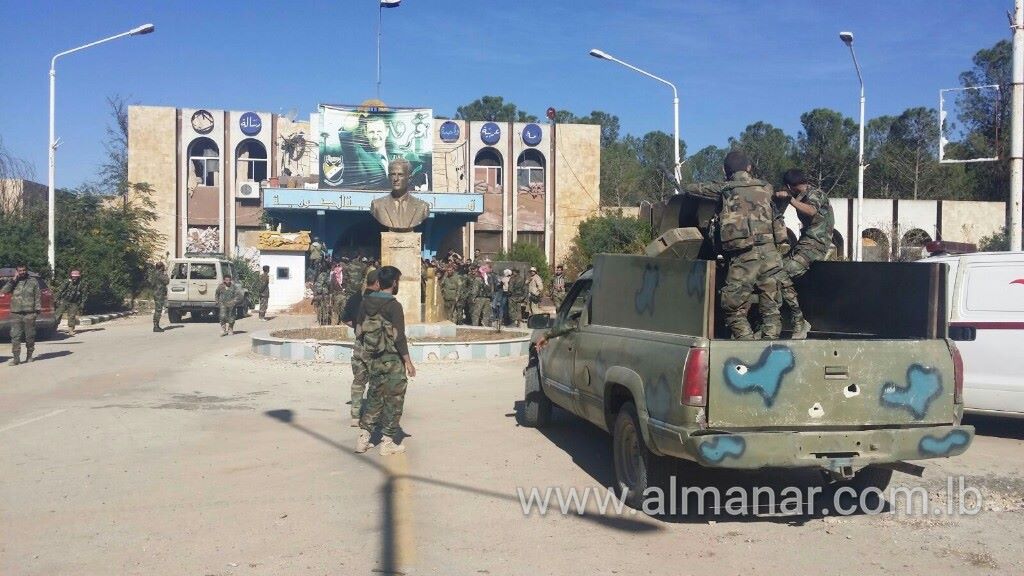 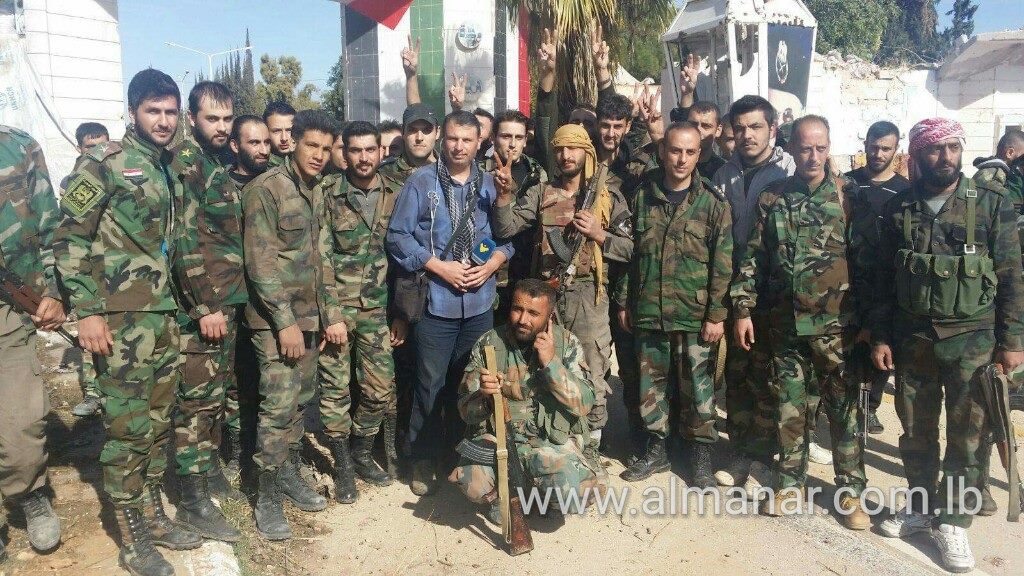 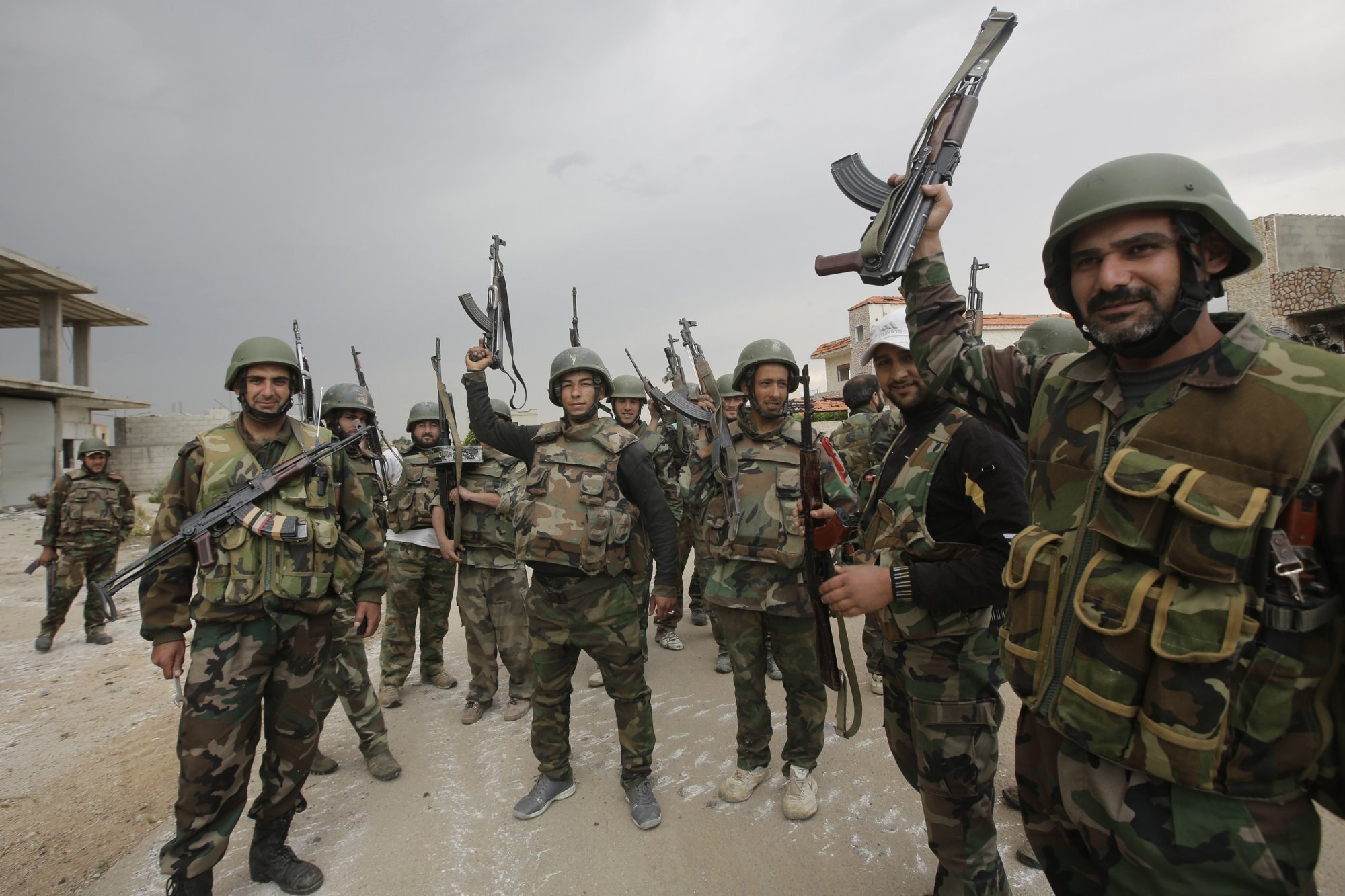 The Syrian army Colonel Suhail al-Hassan, his men were on the point of attack and were able to release Kouvaris.